(Cashman Field is no longer used for baseball as of the 2019 season.)
(Click on any image to see a larger version.)

2006 marked my third trip to Las Vegas.  I had been twice earlier for my fantasy football league’s draft (recommended…nothing’s more fun than drafting on a Saturday, then watching all the games at the same time on a Sunday), and as a result, all I had ever experienced of Las Vegas–and, for that matter, of Nevada–was the airport and the

Strip.  A $15 cab ride from the Stratosphere at the north end of the Strip changed all that.  It brought me to Cashman Field and a chilly April opening night for the Las Vegas 51s.  I was quite pleased with what I found there.

First, let me state a point of confusion.  I’m not 100% sure what the name of this place is.  The signs on the outside call it Cashman Stadium, but the 51’s website refers to it as Cashman Field.  The place is obviously in the midst of some terrible identity crisis.  With contradictory information, I’m going to go with “Field.”  The place is fairly small, and therefore feels more like a field than a stadium to me.

The most important part of my ballpark rankings is regional feel.  I want there to be no question where in the U.S. I am when I’m sitting in the stands of a ballpark.  What would that look like in Vegas?  Slots?  Showgirls?  Garish neon?  That’s not exactly a good 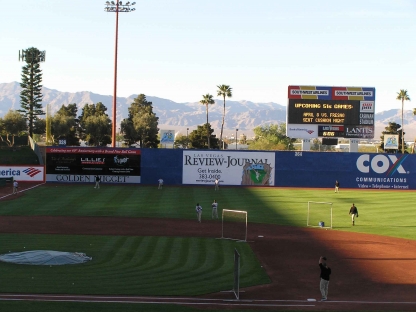 thing at a ballpark.  Cashman Field goes another direction:  it provides a quiet oasis from what one normally associates with Las Vegas, and I appreciate that a good deal.  There were very few promotions–which I like when the baseball is AAA-quality.  All we have to tell us we’re in Vegas are a combination of palm trees and desert mountains past the outfield fence.  (Yes, I know that we have palm trees and desert vistas in southern California.  But I know that I’m not in Southern California because I can SEE the mountains here.)

So while “quiet oasis” isn’t exactly what one thinks of when one thinks of Las Vegas, I like the feel and will rank it high in the “regional feel” category.  When I’m in Las Vegas, my brain can only handle three days of the sensory overload, and even then, I can get a little overwhelmed by the constant lights and BINGBINGBINGBINGBING sounds of the place.  Surely I’m not the only tourist who feels that way.  Unfortunately, we’ve grown to have almost as much bingbingbing in our ballparks as at a Vegas casino.  When I’m enjoying high-quality AAA baseball, I don’t need it.  Cashman Field recognizes this, and even winks at Vegas’ reputation with a cool “only in Vegas” advertising that rings the inside of the ballpark (things like “We love the night games” and “All hits, all the time.”)  The net result was a positive night at the ballpark.

Architecturally, the place has positives and negatives.  Like all three of the warm-weather ballparks 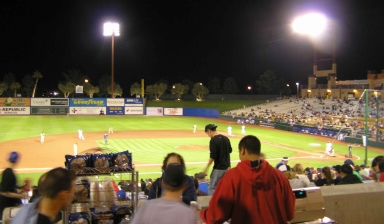 I visited on this trip, it offers the ability to watch the game while on the concourse buying food (especially welcome for most of the fans on this Thirsty Thursday Dollar Beer night).  I do like being able to motor around the ballpark without sacrificing my ability to score the game.  There are grassy hill areas by both foul poles, but there is no trespassing on the grass.  When I was there, I thought that was a shame, because I was picturing that being a nice place to picnic on gorgeous desert summer nights…but then, the next night in Lake Elsinore, I realized they were actually just preventing eight-year-old boys from beating the crap out of each other, a common activity on such hills.  On the negative side, its setting is well north of the strip and downtown, and it adjoins a 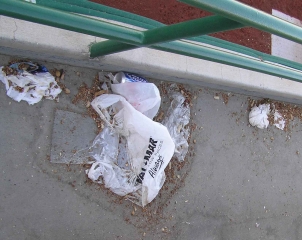 convention center and some sort of museum, which makes it a little nondescript.  There’s nothing interesting about its external architecture.  Although I like the combination of tans and reds, Cashman Field’s connection to other buildings takes away any interest in its footprint (and makes my traditional pregame hike-around-the-ballpark a lot more taxing and arduous, especially on the bum knee I lugged along).  In the no-excuses department, I was really disappointed to find a prodigious amount of trash in the front row upon my arrival at the park.  This was opening day!  I guess they hadn’t bothered fully cleaning up since the last event there, which I believe was a major league tune-up at least four days prior.

Cashman Field has the kind of history-of-baseball-in-the-area stuff I like on its concourse, but they do some things that make it not as nice as it is in places where it’s done well (like Wichita or Spokane).  They have a number of past greats for the Las Vegas Stars and other minor league ballclubs from the city, which I enjoyed, especially because I had not heard 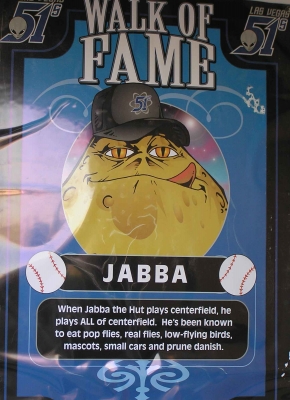 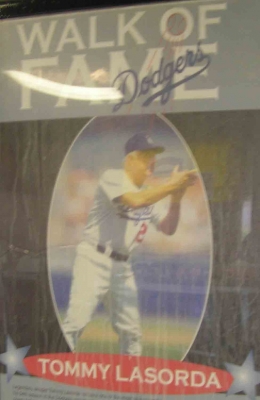 of so many of the ballplayers, such as Paul Faries.  They had Dodgers history mapped out as well.  Even though the 51s are a Dodger affiliate, I didn’t care for these.  I love Jackie Robinson and all, but because his story does not involve Las Vegas, his tribute seemed out of place.  And it certainly seemed out of place when their walk of fame also featured famous movie aliens.  Yes, that’s right…Tommy Lasorda is in the Hall of Fame with Jabba the Hut.  I’m all for wackiness, but this has all the markings of a ballclub and stadium that is simply trying too hard.  Ease up, guys.  This sort of stuff is out of character for a ballpark where, for the most part, they let the baseball be the star.

Speaking of trying too hard, let’s talk for a second about the nickname

of 51s and the mascot:  Hate them.  I never, ever, want marketing to be so stinking obvious.  Sure, I guess we could argue that the nickname is locally appropriate, but I don’t think that was the primary reason for its selection.  It’s clear to me that the primary reason that the name was changed to 51s was to increase the number of fuzzy items that would be sold, as well as hats, etc.  The alien they have on their hat isn’t even intimidating looking (like the guys from Independence Day).  He looks wise and friendly (like E.T.).  Don’t get me wrong:  I loved E.T., and cried when I first saw it at age 12.  But puh-leez.  What’s on a hat should be something that shows pride, tradition, or elicits intimidation.  The 51s go oh-for-three in that regard.

Opening Day 2006 in the minors meant there were replacement umpires on the field.  The minor league umpires, after not enjoying a pay raise in nearly a decade, were given an offer whose 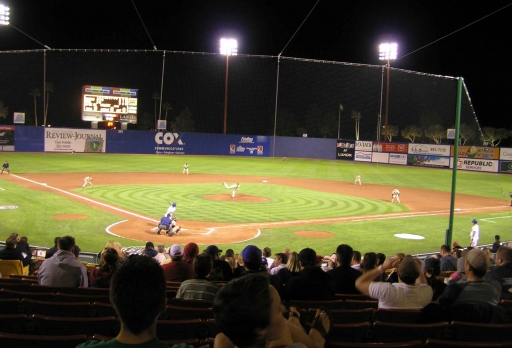 miniscule pay raise was almost entirely counteracted by raises in their health insurance deductible.  When they struck to get a fair deal, Minor League Baseball decided to recruit replacement/scab umpires.  News accounts said that the replacement umpires were recruited from college, high school, and even Little League.

This was the background for a fascinating conversation I overheard.  A young guy in the stands came down to the front row during warmups and called some 51s player over.  He was a striking ump.  The players were very friendly and supportive; I think they were worried about what they’d see in the replacements. Also, many of them had likely risen through the minors alongside these umps.  The players asked what they could do to help the umps.  The ump said “Don’t go crazy, but if you could make it clear you don’t like a call, that’d help a lot.”  Sure enough, there was an ejection that day…a Fresno player got run for arguing a called third strike.  I feel like I know why.

This night also marked the first time my travels overlapped with the travels of someone else trying to make it to all the ballparks.  I met Doug and Carrie.  They’re a married couple 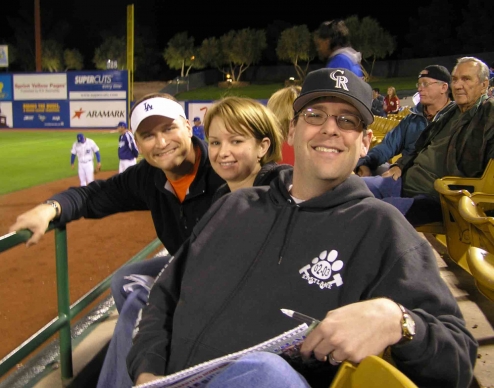 who were actually ahead of me in the quest to get to a minor league game in all fifty states!  They had a little bit of an advantage in that both of them are in the military, so their jobs have brought them within driving distance of a lot more ballparks than most people.  We enjoyed a long stretch of very nice conversation about ballparks.  I liked Cashman Field a lot more than they did, as it turns out.  We talked about major league parks we both have liked through the years–San Francisco, Kansas City, Boston.  Carrie helped me with some missed scoring decisions.  We were headed in opposite directions:  I had just come from San Diego the night before, and they were on their way there the next night.  Still, our paths crossed on this night, and I do hope they cross again.  Guys, drop me an email if you’re ever headed up to the Pacific Northwest.  Tacoma, Safeco, Everett, Portland, Salem…I’d love to join you.  The pretzels are on me.

So, on the whole, a nice quiet night at a place where the baseball was in the foreground.  It wasn’t a perfect ballpark, but on the whole, I felt like the 51s understood what a night at the ballpark should be about.

Regional feel:  8/10
I’m going against the grain on this one.  The ballpark was not much at all what I picture Las Vegas to be, except for the lovely desert mountain views.  But that’s what I liked about it, actually, so that’s why I give it a high score here.  If Vegas is a desert of noise, this place was an oasis of quiet baseball.

Charm:  2.5/5
Occasionally overblown in this department.

Spectacle: 4/5
Very few promotions, which I like for AAA ball, but still enough appropriate distraction if that’s what one likes. 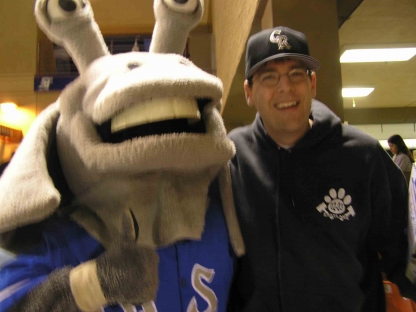 Cosmo and me.  Don’t like the name at all–never let your marketing be so transparent.  And this guy is goofy-looking.

Aesthetics:  3/5
The park itself is a bit dumpy, but the mountain views are lovely.

Scoreability:  3.5/5
Missed a key scoring decision, and the scoreboard guy was a hair slow at times.

Intangibles:  5/5
I just kept enjoying how quiet it was, and what a nice break it was from the bingbingbing.

The Grizzlies’ Brad Hennessey gives up 7 runs, but only 1 of them is earned due to 2 errors by his teammate Tomas de la Rosa’s 2 errors.