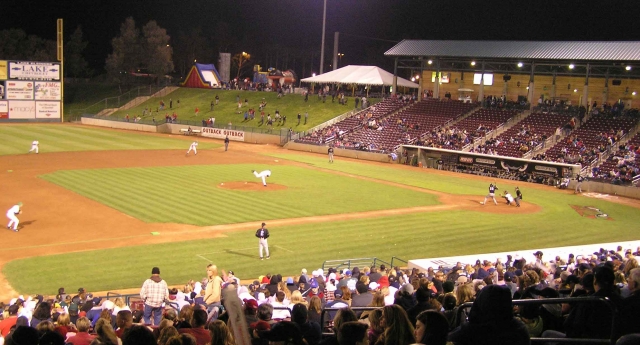 (Click any image to see in a larger size.)

It all comes down to a conversation I had at the gift shop.  I went to this game alone, which mean I was carrying my scorebook as I purchased my mini-bat to add to my Wall Of Minor League Mini-Bats.  God as my witness, the saleswoman uttered the following:

This is sick and wrong on so many levels.  Let me count the ways:  First, why the hell would a scout buy a mini-bat?  Beyond

that, I cannot come up with any reason why a scout would even enter the gift shop.  So why did she ask me if I was a scout?  It had to be the scorebook.  She assumed that a scorebook meant I was a scout.  I believe that she had never noticed a fan carrying a scorebook before.

And why would anyone bother taking a scorebook to The Diamond at Lake Elsinore?  I see no reason why, because baseball is unimportant at this ballpark.  In spite of all of the positive things I’d heard about it, I was not at all impressed with this night at the ballpark. 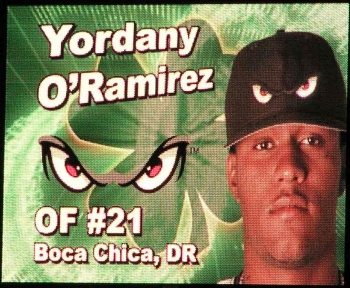 baseball.  For reasons I cannot fathom, they made April 7 a St. Patrick’s Day promotion.  They changed the baselines and bases to green.  They put either an “O” or a “Mc” in front of everyone’s name on the scoreboard.  This ranged from the confusing (since I missed player introductions and didn’t buy a program for a few innings, there was no reason why Skip Adams couldn’t actually be Skip McAdams) to the ludicrous and borderline-offensive, as in the photo here.  Often, the music and promotional crap distracted the 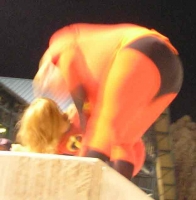 PA announcer, who frequently would fail to announce a batter or a fielding change until after a few pitches had already been thrown.  That is completely unacceptable.  Get your promotions out of the way and do your primary job!

Seriously.  I’m not incapable of having fun.  I love “Bark at the Park” night at Everett Memorial Stadium.  I’m into trivia, silliness, and even bizarre behavior between innings.  I like Bill Veeck.  But once the inning begins, leave the game alone!  Don’t touch the field, and don’t touch the players’ names.  To do so is to send the message that baseball is of secondary or even tertiary importance to the night.  If it were, why bother having a team?  Why not just invite a couple of thousand people over 72 nights a year for themed parties?

The atmosphere of baseball-is-not-important trickles 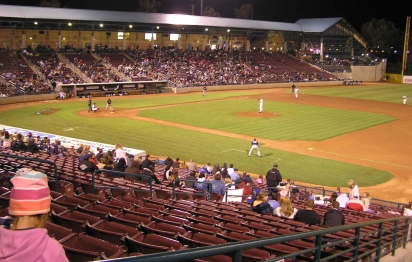 down to every part of the park.  In addition to gift-shop workers who assume that one must be a scout to carry a scorebook, just consider the grassy hill by the right field foul pole.  Alone, this is a positive.  I imagine people hanging out on blankets, picnicking, enjoying the game, maybe throwing a ball around.  I imagine kids running around, too, burning off some steam.  At Lake Elsinore, what we have instead are kids constantly either rolling down the hill, running up the hill, or whaling on each other.  I have three siblings, so I know violence is a base component of any family, but what I saw on that hill was akin to Lord of the Flies.  I saw exactly one kid in the stands (more on him later), but dozens on the hill.  That’s right…families of Southern California had taken their kids to the ballpark where almost none of them watched baseball.

The park is lovely in architecture…nice tan bricks,

red seats, green roof.  The scoreboard is high quality for single-A ball.  The gift shop, the external concourse, the ad-covered monster wall in right field which includes a hand-operated scoreboard…all were very nice.  The Diamond’s location is far enough outside of L.A.’s endless, boring, monotonous suburbs that it’s lovely–near the actual Lake Elsinore and some mountains.  With other people running the team, I might have enjoyed this park, but I’m afraid I couldn’t see through the entire night of silliness…the Irish crap on the field, the obese guy in spandex throwing out T-shirts, the constant assault and battery on the lawn, the indifference of the scorer and PA announcer…all of it was too much to overlook.

and a youngster sitting two seats to my left.  I’ve been keeping track of Colt since he had a big night in Eugene two years back.  I thought he might be a stud in the making, and I especially liked the fact that a guy named Colt wore #45.  He’s been promoted to high-A since then.  He’s switched to #41, alas.  But I like him a lot more now than I did before I saw him at The Diamond because of the way he interacted with the little kid nearby.  This was the second game of the year, and Colt stepped out before his first at-bat and gave the kid a really warm greeting.  “Hey!  Where were you last night?  I went 0-for-3!”  The kid absolutely ate it up, and all of us shouted “Go, Colt!” to get the kid to join us.  Colt even let the kid hold his bat’s donut between innings at one point.  It made for a very nice vibe around where I was sitting.

Even with that nice moment, however, I can’t say I was impressed with The Diamond.  I’d be interested to go back someday if the team were under new management who cared a little about baseball…who recognized that you don’t have to be a scout to pay attention.  When that happens, I’ll probably like the place better.

UPDATE AUGUST 2008: I get fairly consistent emails based on what I write on this site.  Sometimes I receive interesting remarks from people in the front office of minor league teams (such as the nice guys from Tennessee or Everett).  Occasionally I’ll get rage-filled notes from people with anger management problems who take things like frivolous ballpark websites too seriously.

But never before had I received a combination: a rage-filled email from a minor league front-office worker with anger management problems.  I present, verbatim, an email I received from David McCrory, a Storm account executive.

Hey Jerkoff,
I am the obese guy in the spandex throwing out t-shirts,
only it isn’t spandex, it’s red tights, part of the
Mr. Incredible costume which the kids and families really
enjoy if you bothered to look around you, and I wasn’t
throwing out t-shirts they were frisbees, so obviously you
have your facts wrong and you should probably spend more
time paying attention to detail. Now I can see why you need
a scorecard in the first place, you have the mental capacity
of a first-grader.
It’s OK though because we have your picture now and
we are going to have a ball this season making you look
like the complete MORON you are. Stay tuned for more.

Mr. McCrory correctly points out that I made a couple of mistakes on this page–from a distance in the night, I could not tell that he was wearing tights rather than spandex, or that he was throwing out frisbees rather than T-shirts.  If that’s a lack of “attention to detail,” well, I’m guilty, although, unlike the Storm, I try to focus on baseball-related details while at the ballpark.

However, let us consider the way that Mr. McCrory and the Storm’s GM and President (all of whom ignored my request for an explanation for McCrory’s behavior) feel it is appropriate to do business.  They either practice or condone the following behaviors:

1.  To address former customers who disagree with them as “Jerkoff.”
2.  To question those customers’ educational attainment (and to do so in a run-on sentence).
3.  To state that those who score the game are doing so because they are mentally challenged.
4.  To insult those customers three times in a 120-word email (“Jerkoff,” “mental capacity of a first-grader,” and “MORON.”)
5.  Perhaps most alarmingly, to insinuate that they have memorized a dissatisfied customer’s physical appearance and to threaten to humiliate that customer should he ever again appear at The Diamond.

Mr. McCrory’s threats don’t matter to me, since I don’t like the overbearing show the Storm puts on and therefore am very unlikely to return until their product indicates that they value baseball as more than a promotions transference device.  But still, I think it’s good that people see that the Storm’s front office apparently finds emails like this to be appropriate and acceptable.

Charm:  2/5
I like the physical ballpark, but anyone who tries this hard cannot possibly be considered charming.

Spectacle: 1/5
While I like a lot of promotions in single-A ball, this was overdone to the point of disgusting. 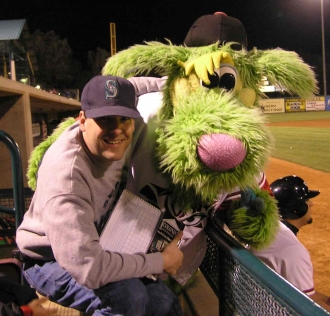 Thunder, a Phillie Phanatic ripoff with a boring name, gives me a little love.  This is yet another thing the team got wrong.  The mascot used to be named Hamlet, which is perfect for Lake Elsinore (am I right, fellow English teachers?).  But no, they managed to screw this up by changing the name to Thunder, which mostly makes me think of flatulence.

Scoreability:  1/5
Seriously, if I can’t trust them to tell me the batter on time, how can I trust them with anything of import?  Also, intentionally putting wrong names up was more confusing than funny.

Fans:  1.5/5
Memo to Storm fans:  There is baseball being played.  You might enjoy watching it.  (The cool kid who was friends with Colt bumps up this score.)

Intangibles:  0/5
As you’ve probably figured out by now, I spent most of the night annoyed at the ballpark’s wasted potential.  And to be called names by a member of the front office…well, that’s just so over the line that it’s comical.

The Storm’s Chase Headley was the hero, driving in the winning runs with a double in the bottom of the eighth.

A.J. Shappi pitched beautifully for Lancaster, striking out 8 in 6 innings.