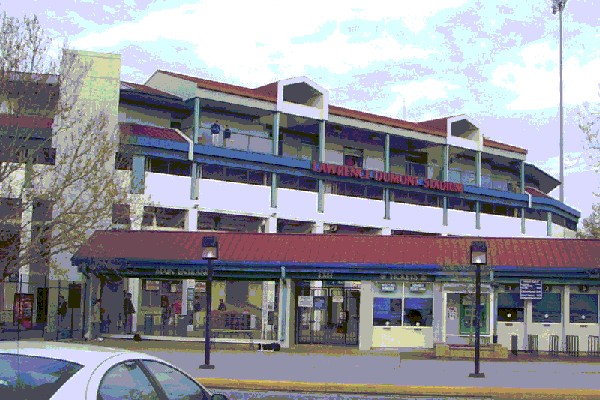 Lawrence-Dumont Stadium was no longer used for the affiliated minors as of the 2008 season. It was destroyed in December of 2018.

Spring Break 2004.  I set out for my spring break, leaving chilly, rainy Seattle for warmer climes–Wichita, Tulsa, Arlington, and Houston.  Why did I have to pick a week when Seattle had beautiful, record-setting temperatures and a mass of Northern air settled over Kansas, Oklahoma, and Texas?  The first Saturday night of the baseball season in Wichita was colder than the proverbial witch’s tit (and, I am sure, colder than a literal witch’s tit…not that I have any experience.  With witches.)  Thank goodness for the $23 K-Mart jacket I secured earlier that day.  In any event, Lawrence-Dumont Stadium was an excellent Texas League ballpark that nobody in Wichita seems to have found.

For starters, Lawrence-Dumont Stadium has a rich sense of baseball history.  Its pavilion makes a special point to commemorate Wichita baseball history, most notably the National Baseball Congress 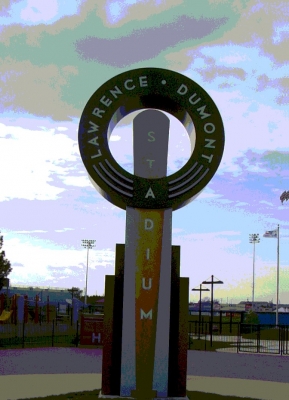 tournaments held there through the years…basically the semipro baseball championship.  There are plaques all the way around the ballpark talking about folks from Whitey Herzog to Mark McGwire.  A fun walk!  I must admit, I enjoyed that a good deal, but I felt it was sort of cheating.  I mean, it’s just a tournament they host…not really related to Wichita minor league history.  But when I learned that Mr. Dumont was responsible for the tournament, I relaxed my concerns a bit.  After all, it was he and Mr. Lawrence, the mayor of Wichita, who decided to build the stadium.  Hence, that pesky hyphen in “Lawrence-Dumont Stadium”:  it’s named after two guys, not one.

But the walk around the stadium also teaches us about Wichita’s minor league past.  Included in this was a list of all of the teams that have played minor league ball in Wichita. On that list, I was delighted to find the infamous Wichita Jobbers. 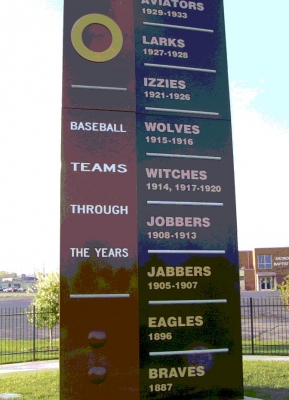 Now maybe I’ve watched a few too many episodes of Beavis and Butthead, but I couldn’t stop snickering about that.  Somewhere, after squandering a series of late-inning leads, an article must have been written under the headline “Jobbers Blow Another.”  So I’m walking around enjoying a juvenile snicker (and thinking that, as bad a nickname as “Jobbers” is, it’s actually better than “Jabbers” or the feminine “Witches”) when I come upon a plaque commemorating the 1910 Jobbers, considered one of the best minor league ballclubs in history.  And what picture did they put next to it?  God as my witness, they put it next to popular former Wichita Aero and major league stalwart Pete LaCock.

Perhaps most impressive was the story–I hope it’s true–that Joe Carter hit a home run during an NBC tournament that hit the Metropolitan Baptist Church on one bounce.  The church is nearly 900 feet away.  This picture probably doesn’t do it justice, but still, check out this view of the church from home plate.  The church is the red brick building with the white steeple beyond the left field wall. 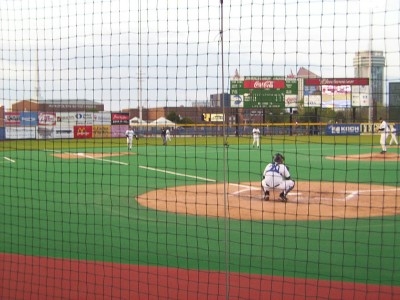 On the whole, this was an excellent night of baseball. The staff with the Wranglers have done a fine job of putting together solid entertainment.  They ran wacky ads starring their young staff (a send-up of The Apprentice, for instance).  There were frequent promotions, but not so frequent as to take away from the baseball.  The ballpark has a fine location on the Arkansas river–there’s a view of downtown right past the outfield fence.  And Double-A baseball is great entertainment in and of itself.  Still, only 155,547 showed up to watch the Wranglers in Wichita in 2003…barely 2,000 per game, only about a quarter of the league leaders and behind even Midland, which is a far smaller city than Wichita.  I can’t for the life of me figure out why.  It’s not because they have a less-than-good ballpark…Lawrence-Dumont is a great place.  It’s not because it’s a poorly-run night of baseball…it was excellent.  It’s not because it’s inconveniently located…it’s right in the heart of town.  There’s no excuse, Wichita.  Get out to your wonderful ballpark.  You’ll have at least as good a time as I did.

Okay, now that I’ve said that, let me cut the Wichita folk some slack…the weather certainly was the lion’s share of the reason that attendance was so abysmally 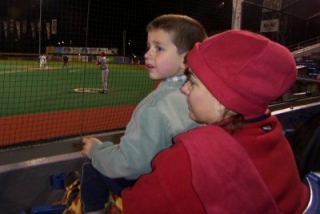 low the night I was there (announced as 528, but that was a laughably high number…I put attendance at 130.  That’s right, I actually counted…I figure that the people who were in the bathroom are counterbalanced by ushers I mistakenly included in my count.)  It’s funny who you see among the most die-hard fans who would show up on a 40-something degree night in April with horrendous winds.  I noticed a good number of women sitting alone and wondered why.  Of course!  Wives and girlfriends.  And there were a good number of scouts with radar guns.  Also, several close relatives.  Notable among the latter were the friendly brother- and sister-in-law of a backup catcher I chatted with throughout the game…I had a long conversation with their four-year-old son.  It’s awesome how four-year-olds start conversations.  His starter?  “I have the same name as my grandpa.  His name is James…and my name is James!”  And later:  “I live out in the country.”  Cool kid!  He’d get along with my nephew, but as his mother said, “1500 miles is an awfully tough play date.”  I like the Midwest.  Friendly people.  Women with ponytails and minimal makeup.  People who assume you’re a good guy and talk to you.

And I like Lawrence-Dumont Stadium, which more Kansans should get out to see, especially on a night where they can’t see their breath.

Regional feel:  9.5/10
The celebration of Kansas baseball in the museum-like pavilion is fantastic.  Add to that a location on the Arkansas river, a view of downtown Wichita, and a few friendly Kansans, and there’s not a doubt as to where you are.

Charm:  2.5/5
There’s a contagious love of baseball here.  But ICK!!!  The astroturf infield with the grass outfield?  WHY????  Back when Wichita fed the Astros, it made sense.  But now they feed Kansas City, who has a grass infield.  It’s just an eyesore now.  Lose it. 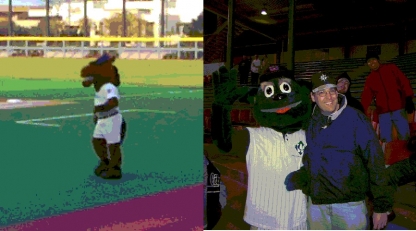 Didn’t see much of Wilbur–the best I can do for a picture is the distorted shot at left. I think the cold night kept him in.  I did take a shot with the Garbage Goblin, however, on the right.  Please note that a gust of wind has gone up my K-mart jacket…that’s not my belly under there, it’s mostly cold Wichita air.  I never saw Wilbur and the Garbage Goblin together, which strongly leads me to suspect they’re the same guy. “Wranglers” is a completely appropriate name for Wichita, and the horse totally appropriate as a mascot…although, upon reflection, aren’t horses the natural adversaries of wranglers?

Aesthetics:  4.5/5
Quite nice, with a view of downtown and the river.

Pavilion area:  5/5
A wonderful walk through Wichita baseball history that starts at home plate and goes all the way back to center field.  Lots of good stories.  The best part of the ballpark.

Scoreability:  4/5
No major issues here, but no major plusses.

Intangibles:  4/5
In spite of the weather, the sparse crowd, and the incredibly lousy game, I got a great feeling from this place

A god-awful game in hellish cold.  Arkansas pounds out 19 singles and a double.  The worst part was that 5 of the runs were in the 9th inning, just as all of us were ready to head home.  If I’d had a date with me who wanted to take off, I would have probably demurred…and that is saying something.

Tim Bittner pitched 6 innings of 4-hit ball for the win, with Cam Esslinger and Dan Mozingo closing out the 4-hit shutout.