The Minor League Stadiums In Order Of Preference

I suspect that, ten or fifteen years down the road when I’ve finished this quest, that it will be hard for me to compare parks…somehow, I bet they’ll blend together more than the major league parks will.  So I’m going to approach this differently from the major league rankings.  I will assign each park a ranking number from 1 to 50.  As a good teacher, I need a rubric on which to grade the parks, and I have developed the following:

Now, to address these in more detail.  (If you don’t care, scroll down to the rankings below.)

10 points:  Regional feel.  Just like major league parks, I must ask one question:  is there any question in what city, state, region of the country I am in while I’m in the ballpark?  A view is one of the best assets here.  Quirkiness helps too, but not for quirkiness’ sake.  As shown by the point value, this is most important to me.

5 points:  Charm.  A tough one to measure, but I want to be in a place that has some character.  I don’t want it to feel like I’m borrowing a high school club’s park.  Even upper-level minor league ballparks need to make me feel good to be there.  Both old and new parks can score well here.

5 points:  Spectacle.  At the major league level, I find countless promotions and ads to be annoying and distracting.  In the minors, where the baseball is less likely to be scintillating enough to require my full attention, I want a few things going on…ideally, something between every inning. The lower the level of play, the more crap I want going on–provided it doesn’t disrupt the game.  I’d like it to be fun and interesting, like the race around the bases between Webbly, the Everett AquaSox’s mascot, and a dog present for Bark in the Park night.  (The dog ignored the course, ran to the mound, and picked up the rosin bag, only settling down when the Yakima Bears’ shortstop got down on one knee and called him over.  Now THAT’S minor league baseball!).  I don’t want anything stupid or contrived, however.  And–this is critical–ONLY between innings.  Once the game gets rolling, don’t distract. (To put it another way, don’t you dare do anything between pitches, and keep the stuff between batters to a bare minimum.)

5 points:  Team mascot/name.  Don’t stop at one mascot!  Follow the example of my home minor league team, the Everett AquaSox.  They have Webbly the Frog.  That would be enough for most folks, I’m sure, but when you add Frank the Frank (that’s right, a giant walking weenie-on-a-bun), you’ve got something special.  And when Frank the Frank starts firing the hot-dog cannon to give people free hot dogs, well, that’s something  special.  (All that’s missing:  Frank eating a hot dog.  Bizarre and cannibalistic, but I want to see it.)  Also, go the extra step. 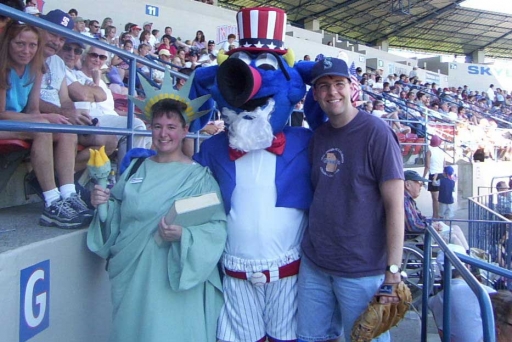 On July 4, the day I started my quest to attend a minor league game in every state, the Spokane Indians did even better, dressing Otto, their mascot, in patriotic garb, and having a Statue or Liberty mascot accompany him. As far as team names go, silly, folksy names are good, particularly when they are locally appropriate, like the Tulsa Drillers or Mahoning Valley Scrappers.  Silly names that are transparently for marketing purposes don’t do it for me.  (I’m talking to you, Albuquerque Isotopes and Las Vegas 51s.)

5 points:  Pavilion area.  I want a place where I can feel like I’m at a ballgame even when I leave my seat.  That means lots of activity with happy hawkers, music, and possibly a museum-like exhibit like the one in Spokane.  And I’d rather it not be under bleachers or any other cover, if at all possible.

5 points:  Scoreability.  I want lineups to be accessible in the pavilion before the game.  Extra points if the lineup is on a white board or chalkboard.  I want the program to have up-to-the-minute stats, and to include how each player was acquired (I root for players in inverse proportion to how early they were drafted.)  The PA announcer needs to be very clear about who is at bat and all changes in the field, especially pitching changes.

5 points:  Fans.  They need to be having a good time: raucous but not rude, into the game and knowledgeable about baseball–but knowledgeable enough not to expect major league plays.

5 points:  Intangibles.  This is where I put everything that doesn’t fit anywhere else.  It might include factors that were unique to the one day I was visiting that are actually irrelevant to the park–like a good ballgame, a nice sunset, or something else that impacts my feelings about the ballpark.