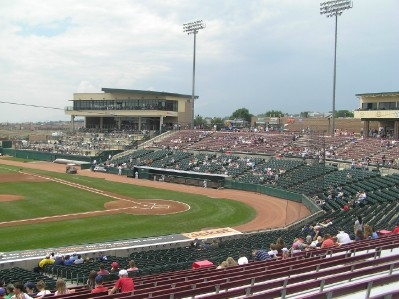 (Security Service Field is now known as UCHealth Park. It switched from Pacific Coast League baseball to Pioneer League baseball in 2019.)
(Click on any image to see a larger version.)

My first minor league ballgames were in Colorado, at Mile High Stadium,

But, according to the rules, my quest to get to a minor league game in each of the 50 states didn’t officially begin until 2003, so this necessitated a trip to Colorado Springs in August of 2008.  I was taking my bride to my 20-year high school reunion in the Denver suburbs, and it was very easy to take the jaunt down I-25 to see our local team, the Portland Beavers (who my wife rooted for vociferously) take on the Sky Sox.

There, we found a great ballpark in a highly unfortunate location. 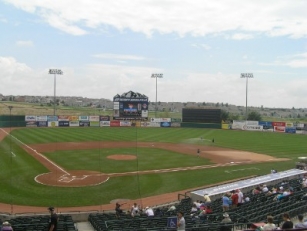 therefore does not afford a view of the Rockies.  Indeed, it’s not really the ballpark’s fault that it’s located quite a ways east of the city and of the mountains, and therefore doesn’t really have any natural Colorado 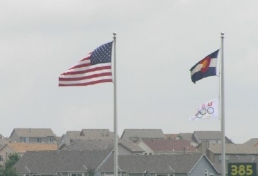 feel to it at all (eastern Colorado is not what one thinks of when one thinks of Colorado).  But the view beyond the outfield fence of endless tract housing is depressing to say the least.  When I’m pinned between strip malls and condominiums, I don’t have any feel for where I am.  The rule for ballparks is the same as the rule for real estate, and Security Service Field strikes out on three pitches when it comes to location, location, location.

However, the ballpark itself was quite lovely if one didn’t look beyond the outfield fences.  It has many touches I enjoy.  Visiting ballplayers walk past the kids’ area to get onto

the field, thus allowing for autographs.  The kids on the grassy hill are sedate and watching the game, probably because the Sky Sox, while not immune to promotional shtick, put baseball first.  And the retired numbers from past Colorado Springs teams are an especially nice touch–they bring us back to a local level that tract housing can’t.  So does the US Olympic flag flying under the state flag.

Security Service Field is a pretty small ballpark for AAA, which I like.  Rarely does a fan get a chance to be so close to AAA talent–and a ballpark of this lesser scale (it felt like a class-A or AA ballpark) is a pleasant surprise in the high minors.

Sox the Fox, the Sky Sox’s mascot, was simply wonderful…as energetic as any mascot I’ve ever seen.  He started the day by doing a

backflip off of a golf cart and didn’t stop moving the entire afternoon.  He actually did a couple of things that made me laugh–rare for a mascot.  I say this even though he gave me some grief for wearing a Mariners hat.  I was in the front row behind the dugout (prime mascot territory) and he removed my hat and pretended to urinate in it.  A little blue humor never hurt anyone.  But it was his athleticism that most impressed me.  He’s as good as I’ve seen. 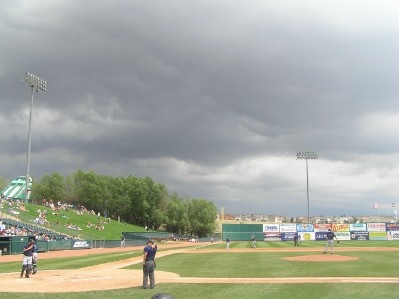 was created by a rainout the night before.)  Thunderstorms gradually rolled all around us, with ominous, distant thunder leading me to wonder whether we’d be able to get one game in, let alone two (which were both slated for 7 innings).  Sprinkles occasionally would hit near us in what was as close to a muggy day as anyone can get in Colorado’s dry climate.

At some point during the fifth inning, my bride turned to me and asked the following:

“You know what would be better than watching a baseball game under the clouds?” 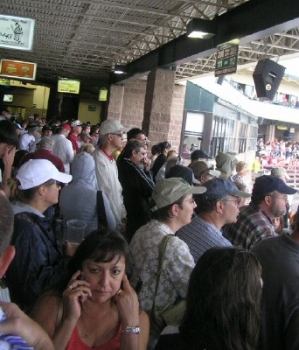 “Watching the Olympics in our hotel room.”

But still, my bride was a fantastic trooper.  The game went into extra innings (meaning the 8th), and in the top of the 8th, the skies opened up.  The thunder wasn’t too close, and the umpires were eager to get at least one ballgame in, so the game continued in the downpour.  Everyone in the ballpark headed up to the sheltered area behind home plate…and almost nobody left, either because they didn’t want to miss the end of the game or because they didn’t want to run through the rain.  Colorado storms usually don’t last too long, and this one passed quickly, but still, most of the crowd headed home, including Michelle and I.

Still, I give the crowd and the Sky Sox credit for a good experience and a nice ballpark.  It’s just a shame that experience and ballpark couldn’t be next to mountains instead of next to suburban blight. 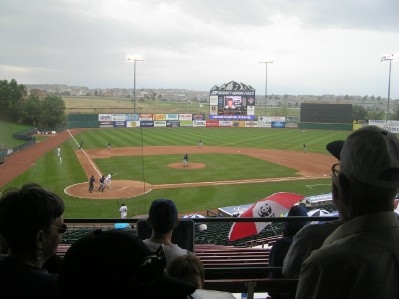 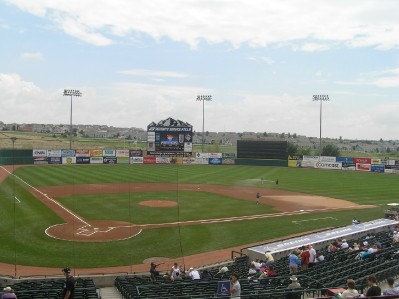 Regional feel: 4.5/10
The Sky Sox do well to get the score this high, actually.  I’d have no idea where in the U.S. I was based on what I can see from the ballpark, but Colorado-themed concession items and retired Sky Sox numbers prevent this score from going far lower.

Charm:  2.5/5
Again, when I walked into the place, I thought this score might be a zero, but the Sky Sox put on a very nice show.

Spectacle: 3.5/5
A bit too much for AAA ball, but oh, that mascot was something else. 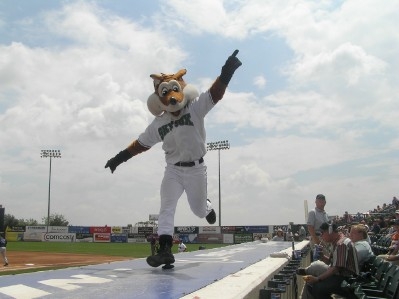 “Sky Sox” is a fine name for a Colorado team, and Sox the Fox also a fine name…and the guy in the outfit earned this score with all his running and jumping.

Scoreability:  4.5/5
The Sky Sox did a fine job.  I especially featured the large, prominently-displayed lineups on the concourse.

Fans:  4/5
I can’t blame them for going home after the first game…to be fair, we did too.  (But also to be fair, they weren’t pregnant.)

Intangibles:  2.5/5
Lots of good here, but I’m afraid what I’ll remember is the tract housing.

An incredibly dramatic ending.  Cedric Bowers uncorks a wild pitch in the downpour in the top of the (extra) 8th inning, scoring the Beavers’ Peter Ciofrone.  But the Beavers’ Edwin Moreno couldn’t seal the deal, as Sky Sox catcher Adam Melhuse crunches a 2-out walk-off home run to give Colorado Springs the victory.