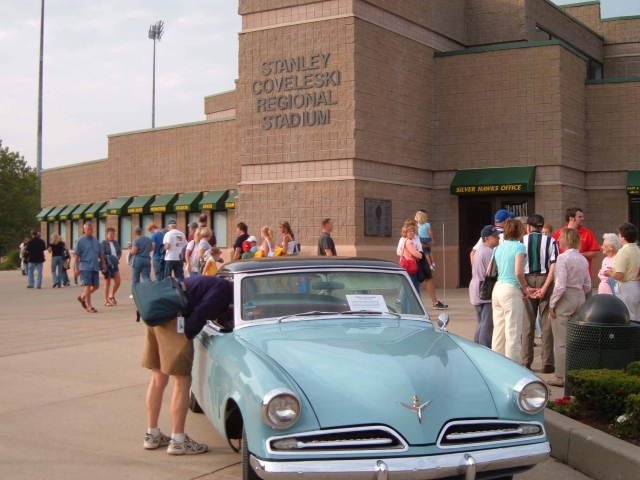 (The ballpark is now known as Four WInds Field at Stanley Coveleski Stadium.)
(Click on any image to see a larger version.)

Stanley Coveleski Regional Stadium (or, as the locals call it, “the Cove”) is in a decent location as far as the “is there any doubt where you are” test.  It’s hard up against a train station on one side–charming architecture that is visible above the right field stands.  On the other side, there is the spire of what I assume to be a Catholic church in view.  These two items in concert say South Bend to me, but on the inside, there’s little clue that I’m in Indiana.

College singing buddies Rob (of Three Rivers Stadium and Hooters fame), Kristin and I were fortunate to get seats in the front row behind the home dugout.  I looked forward to watching the game, but something transpired which had never 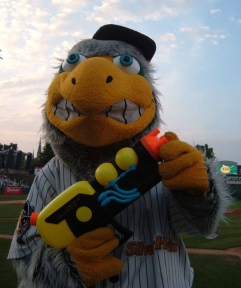 occurred to me…when one is in the front row behind the dugout, one’s view is often obstructed by dancing mascots.  Additionally, kids who wish to see the mascot frequently cascade down to the front row and make annoying child noises.  I wonder why this problem had never occurred to me?  Nevertheless, Swoop, the Silver Hawks’ mascot, is quite easily did the best job out of all mascots I have ever encountered.  He was energetic, wacky, and fun throughout.  For example, he and the alternate mascot (a child dressed in a giant mustachioed head) sat on the dugout and played spin the bottle with a couple of young women in the front row.  Hilarity ensued!  The mascot actually made me laugh a couple of times–a rarity.  Nice going, Swoop.  Now sit down and get out of my way.

Beyond the mascot, there were a whole lot of negatives about the Cove.  For starters, let’s talk about the mini-bat.  I buy a mini-bat at every minor league park I see a game at…they hang by a map of the US in my den.  The quality of mini-bats in South Bend were unacceptably inferior.  At first, I thought the bat was hollow, but I no longer think so–now, I believe it’s just made of a really chintzy light wood.  Oh well–so it’s light, whatever.  I set it on the ground and watched the game.  When I picked up the bat at the end of the game, the paint had worn off of every part of the bat that had made contact with the ground.  How bogus is this?  So I headed off to the souvenir shop to trade it in, and had the following conversation:

Arrrggh!  I did wrap the bat carefully in a sweater, packed it up…and it’s made it back home without any damage.  The fact that this bat was sold to me for an above average cost (usually I pay $4 or $5 for a bat…this was $5.25) leads me to think that they were all about squeezing off profits.  This led me to realize that my hot dog was cold and my soda felt a bit watered-down…in combination, not a great feeling for the ballpark. 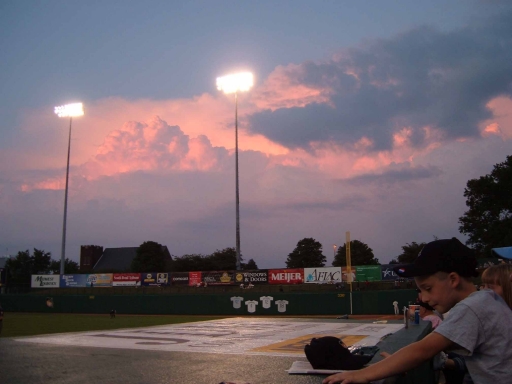 Worse, I didn’t have any idea what was happening due to an inferior program and unacceptably incomplete PA work.  It was exceedingly difficult to score a game at Stanley Coveleski Regional Stadium.  Sure, the lineups were accessible in the pavilion, but what about during the game?  The PA announcer failed to announce three of the four relief pitchers that entered the game–he only announced the pitchers who entered mid-inning.  This means the guy either didn’t notice that the pitcher was new (in spite of the umpire’s clear “new pitcher” signal) or didn’t think that we cared.  We do care, PA guy.  This left me in the position of figuring out the pitchers’ names on my own from the players’ numbers and my program.  Or maybe not–much to my dismay, I found there was no opposing roster in the program, and I couldn’t seem to find a scorecard to buy.  So I had to get the names of two Wisconsin relievers on the Timber Rattlers’ website later that night.

Even worse was a failure to announce the South Bend reliever who entered to pitch the ninth inning.  After fruitlessly waiting for the PA guy to say his name, I figured I’d check to see who #33 was in the program.  Incredibly, the players were listed alphabetically and without numbers!  What was I supposed to do, guess at his height and weight?

This led to a wonderful moment–an explication of one of the reasons I like Rob so much.  He’s so terribly pleasant and friendly, yet sorta crazy.  As the pitcher is running off the field at the end of that inning, Rob shouts at the pitcher repeatedly:  “What’s your name?  Hey, 33, what’s your name?  What’s your name??”  #33 ignored the lunatic in the front row–I believe wisely.  But Rob wasn’t done. 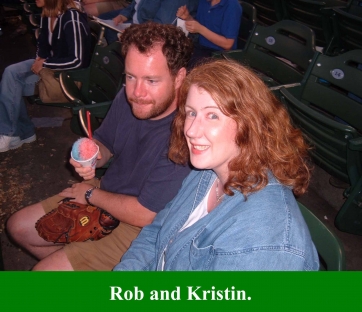 Then, the coach gave us the information we wanted, although it was hard to hear–but by cross-referencing our alphabetical program, we eventually were able to figure out what he was saying:  “Cremidan.  Alex Cremidan.”  Thus it came to be that Alex Cremidan  was given credit for his perfect ninth inning, including a strikeout.  Now, coaching a minor league team is likely a challenging job in and of itself, so to willingly add the PA announcers’ duties to your own is a very selfless action.  As a result, I’m very impressed with this coach, and would like to thank him by name in this public venue…but I can’t, because the Silver Hawks don’t have coaches listed on their website or by number in their program.  Oh well.  Thanks, #17.

One more complaint–the crowd, while mostly kind, did have one moment of ugliness.  After flying to left field in the bottom of the seventh inning, third baseman Augie Murillo (if memory serves, this was the guy) was nearly drilled by a tennis ball thrown from the crowd as he returned to the dugout.  They had sold tennis balls to be thrown into hula hoops on the field for prizes after the game, but someone decided to take a shot at a player instead.  I was watching Augie head back to the dugout when the ball zinged by.  He immediately looked up, and 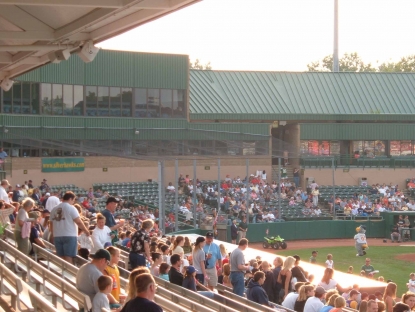 with a few teammates, had ushers head towards the hooligan who threw it (although, given that Murillo’s head was down, I’m not sure how he could have known).  Much to my surprise, rather than a nearby drunken guy, ushers ejected a woman who was at least 25 yards away.  Quite an arm.  “Was that her?”  I asked Augie.  He nodded.  I love getting into conversations with these guys.

There’s a lot to like about this ballpark–its location, the cool multiple mascots, the grassy berm in the outfield spectators can suntan on, the dramatic Midwestern thunder cells in the distance reflecting a pink sunset.  But I got an overall negative vibe from the place because of poor service from top to bottom, from the people selling the mini-bats all the way to the guy in the PA booth.  When I add it all together, it’ll wind up near the bottom of the list, although with a new set of workers, I could see me returning someday and enjoying it far more.

Regional feel: 7 /10
Nice placement between a church and a railyard, but little inside the ballpark that says one is in Northern Indiana or Michiana (the horrible term locals use for the area). 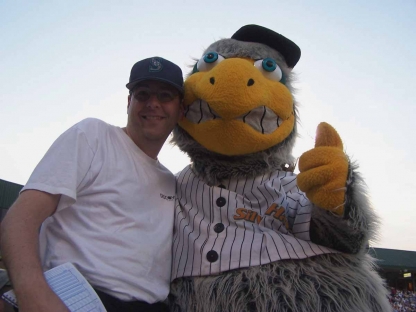 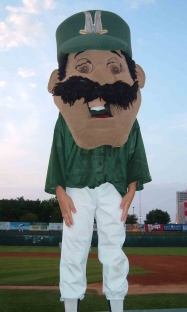 Swoop and I are in the left picture here, with the mysterious mustachioed kid-mascot to the right.  Swoop is a fine name, and I like the multiple mascots, although Silver Hawks isn’t, to my knowledge anyway, local. (Update April 2008:  The Silver Hawks, two of their fans have informed me, are named after the Studebaker Silver Hawk that was once manufactured near the stadium.  Nice historical touch there.)

Aesthetics: 3.5 /5
Not too much in the way of beauty here, but a gorgeous thunderstorm in the distance helped.

Pavilion area: 3 /5
Just fine.  A little dark and dreary, but a nice set of plaques commemorating South Bend baseball history, including one to Mr. Coveleski himself and a couple commemorating the stars of South Bend’s AAGPBA entry, the Belles. 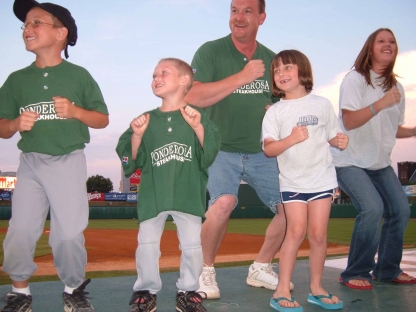 While most were fine, I can’t overlook the violent lout who threw a ball at a player.

Intangibles:  0/5
On the whole, I just wasn’t impressed–I simply felt like profit was valued over service.  Worse yet, they misspelled “Wisconsin” on the standings board!  (They had an “o” where the second “i” is.)

Wisconsin pitcher Nibaldo Acosta was the star of the day, scattering 9 hits over 8 innings, giving up only 1 run.