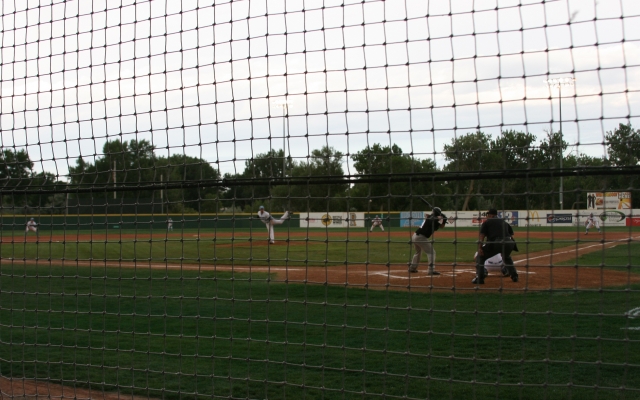 Click on any image to see a full-sized version.

My 2013 visit to Casper marked the first time I had to invoke the “in the event there is no affiliated baseball in a state” clause in my minor league state quest.  Casper had had a Pioneer League team for

about a dozen years before they left for the greener pastures of Grand Junction, Colorado in 2012.  My family set up a Wyoming-centered vacation the year following, and we selected the Casper Cutthroats of the Mountain Collegiate Baseball League (a college wood-bat league) as the game we’d attend.  I’d been to one college wood-bat game prior to this (I checked out the Cowlitz County Black Bears, who play ball about 35 minutes north of my house, back in 2012), but that was a lark out of curiosity: this wood-bat

league game sandwiched between 6 affiliated (low-level) games on the same trip was occasion for some soul-searching as to why it’s important that my minor-league ball be affiliated.

First and foremost, I think that I like affiliated ball because it’s easier to follow the story arc.  From Pulaski to Tacoma, I know that every ballplayer has the same goal:  to play for the Mariners.  I can get a good sense of how things are going with the insert of any decent minor league program: give me a guy’s age, stats, draft slot, and most recent team, and I’ll be able to tell you (with some margin of error) where the guy is with relation to his goals and how things are going for him. In independen

t league ball (which I admit I have not yet watched), the story arc is much trickier.  A vast majority of the guys playing there are affiliated-team castoffs that are looking for one more chance to get noticed and hook on somewhere.  Occasionally one makes it back into the fold and even makes the majors again.  However, that’s just too hard to keep track of for me, and the diamonds in the rough are too difficult to anticipate.  While it may be true that independent ball is possibly of a higher quality than lower-level minor league ball, the difference is likely not good enough for me to suss out with the naked eye in a single game.  I’ll take the story arc over the quality of play.

Casper offered me a different brand of ball, however: college wood-bat league.  The quality of ball was not that high, at least as far as I could see.  I don’t want to pretend that the low minors are always scintillating baseball: there are certainly some blown plays.  It felt like there were far more 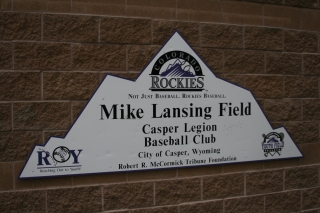 blown plays, however, in the game in Casper that would have been made in a regular league.  On top of that, I had a problem with the design f the league.  Casper’s win on this July 3rd night gave them a record of 27-1 (the preceding is not a misprint).  And I have an issue with the lack of parity in the majors!  I was left wondering how this was even possible.  Turns out we had some conversations that clarified the way the league works.  If I were the commissioner of a college wood-bat league, I’d gather an appropriate number of players at all positions and then randomly assign them among the teams in my league.  Turns out that’s not the way it works.  Each team goes out and gets players.  In fact, players pay for the opportunity to play in the league, even to the point of paying for their own bats.  Much of this gathering of players is based on who one knows.  As a result, Casper had an advantage over other teams not only in quality of players, 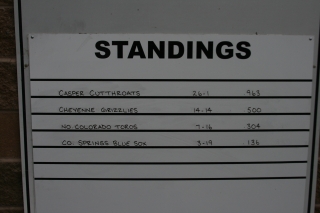 but even in quantity.  Opposing pitchers who are getting shelled aren’t relieved often: if a team has an entire pitching staff of 5 or 6 people (which I was told was a reality for some teams in the league), they stick with the starter even on an off night.  To me, this is grossly unfair and makes for a less-fun product.

That said, the Cutthroats provided a fine night of entertainment.  They had an appropriate number of promotions for low-level 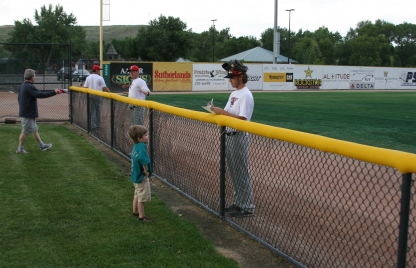 baseball, but more importantly, they opened up the whole team for autographs after the game.  My 4-year-old got an autograph from an opposing player before the game, but then scored about ten after the game, walking right down the line of kind college kids.

And they were college kids.  Before the game, as I meandered around the ballpark taking photos, the team was engaging in a juvenile contest—a stupid-boy game that anyone with a Y chromosome understands the appeal of.

They were competing with each other over who could get over the 3.5-ish foot wall without using his hands.  Some tried scissor-kicks, some placing their abdomens on the rail and depositing themselves over.  But all seemed to be having a great time doing it.

The ballpark was fine: adequate, not great.  I could see why the Rockies would rather have been in another facility (although I’ll have to wait at least a year before I can 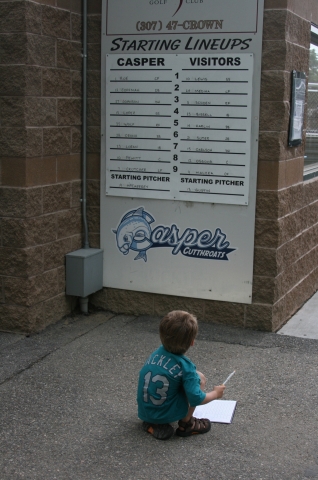 see Grand Junction for comparison’s sake).  Conversations indicated that the Rockies were dissatisfied with lighting and sod, and I could see issues with both.  It brings up an issue I have with minor league baseball in general:  I can understand why a team would not want to keep their team in a small or antiquated stadium.  In fact, if I were the owner of such a squad, I’d want to move them out of such a place too.  But as a fan, I like the homey feel of places like this, Batavia, or Helena.  It’s just about perfect.  It’s also on the way out.  (Sort of.  The Brewers, since they play in an ancient, antiquated, and unsalvageable Kindrick Field, are rumored to be looking into heading out…to Casper.  We shall see.)

I enjoyed the light Rocky Mountain thunderstorm that blew across before first pitch: it reduced the temperature

from the 90s to the 70s, for one thing.  And the Wyoming touches in the stands were quite nice as well, even if some were all about the Rockies.  April, who sold me my tickets over the phone, remembered me and even let me have a couple of foam fingers for free (the Cutthroats do not sell mini-bats, which I buy for the home team of every ballpark I attend on my minor league quest, so I needed a substitution and sent with a foam finger).  I found it sweet she sold (gave) me the foam fingers (gave me the finger?) while holding her son in her arms.  It just felt right.

And then I met Brian.

Brian marks a milestone for me: the first time I have been recognized—stone cold—for my website.  He came up and said “Hey, you’re from tomsballparks.com!” We corrected the name, but he had it figured out from my Mariners shirt and my Hillsboro Hops hat…that gave him the clues, and my photos of myself did the rest.  This was the closest I will ever come to being a celebrity, so my wife left me alone with Brian for quite a while.  He had served as the Casper Ghosts’ mascot for a number of years and was a regular at Cutthroats games, and gave me some of his perception on what went down that caused the Ghosts to flee to Colorado.  We talked minor league ball for a while, and in the process, he quoted at least a dozen of my minor league pages. 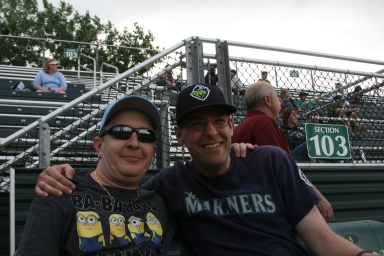 It was simply incredible: he probably knows this website better than I do.  I had a wonderful time talking to him.  At the end of the night, he said it was “spectacular” to meet me.  I have never been recognized by a stranger before, and I have to admit I rather liked it.  It might be time for me to form a band or something and get some groupies.

All in all, while the ballpark was lacking in a few areas, it was a splendid night for a million more important reasons than the ballpark itself.  It’s a long way from Washington to Wyoming, but Casper and the many great people I encountered there made it worthwhile.

Not terrible, but not great either.  There’s a hodgepodge of local history to be found, but nothing that screams “Wyoming” in the view (just a couple of hotels and generic office buildings).

Small-town charm in a number of ways.  I loved the family feel, the autographs, the way the wife of the owner runs the gift shop while carrying her son on her hip…quite a lot going on here.

I’d have liked a little more on this level, but I still liked the show.

I didn’t see a mascot, but I can cut the team some slack there due to what were clearly shoestring budgets.  “Cutthroats” was a cool name: threatening, but locally appropriate (it’s a fish).

Some nice high-plains light, but again, not much of a view.  The place is more utilitarian than anything else.  Middle-of-the-road.

Huge, expansive areas to walk around, but not a lot there, as shown: 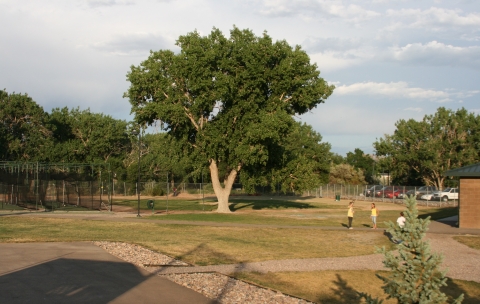 Not much help here–was occasionally confusing.  Again, this might just be a product of the level.  That’s the breaks.

Sorry, Brian, and sorry, awesome couple we talked to:  couldn’t give it a perfect score because I was harassed by a drunk fan in the bathroom while I was trying to get my 4-year-old son out of a locked stall.  (Thankfully, the drunk’s friend whisked him away, and thankfully again, I was able to clamber on the floor to rescue my firstborn.)  Here’s a picture of the nice couple, parents of Northern Colorado Toro shortstop/pitcher Mike Lewis.  We talked to them at great length about the league and how it works. 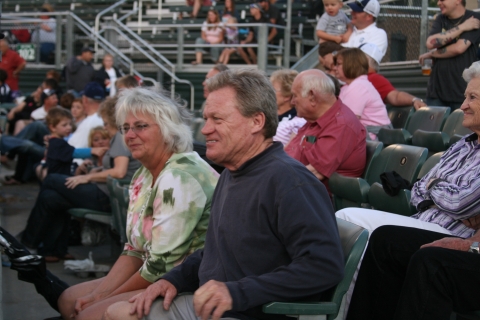 Dude!  I was RECOGNIZED, people were nice…and then there was a whole night of autographs for my kids.  I left the park feeling wonderful, and you just can’t argue with that.

Cutthroat Jamie McCaffrey (of Corban University in Oregon) will become my litmus test for the quality of this league, as he totally owned the Toros on this day.  He pitched a five-hit shutout, walking none and striking out 16.  Sixteen.  If he flames out in the very low minors, or doesn’t get drafted, that will tell me something.

Third baseman Julian Cronk (three hits) and first baseman Blake Loran (a double and a triple) led a 13-hit attack for the Cutthroats.