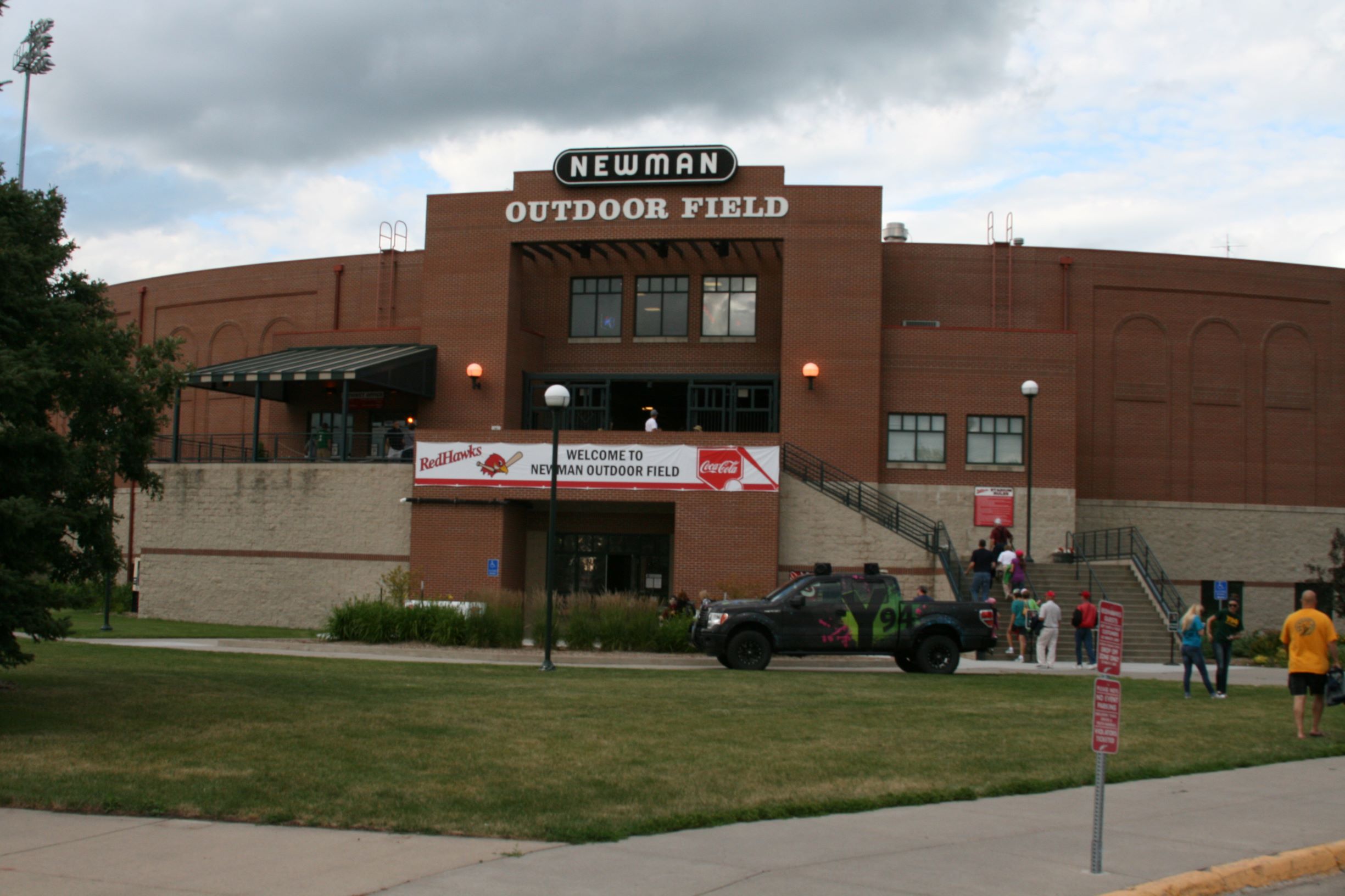 Newman Outdoor Field tucked back into the campus of North Dakota State University, and was a fine place to watch a ballgame. It did really well in the do-you-know-where-you-are test. Some of this was simply a matter of being surrounded by 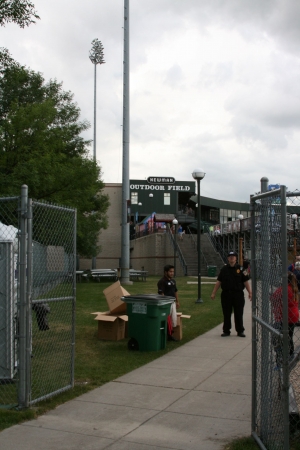 the university, one of the bigger facets of living in Fargo.  My pre-game circumnavigation of the ballpark brought me quite a few NDSU buildings, labeled as such, which was nice. It was a neighborhood ballpark, and the campus was the neighborhood.

Some North Dakota touches were found embedded in the design. For starters, can you do better than an “ND Corn” foul pole? That’s a pretty nice ad, appropriately maize-colored, and naturally integrated into the ballpark. Then there’s

the way they named the press box after a local sportscaster, Steve Miller, who had passed away not long before.  I just like stuff that says “Hey, we’re about [local site],” and I got that from North Dakota on the whole.

We had even visited the Roger Maris museum earlier in the day. It was as understated as the guy was. Tucked into a mall (so many Carson Wentz jerseys for sale, even though the NDSU alumnus hadn’t yet started his rookie year), 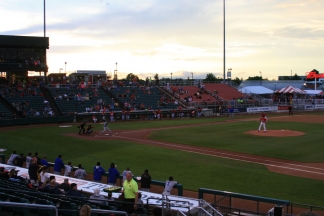 there are a few items of Maris memorabilia and an opportunity to watch a short movie on him while sitting in old Yankee Stadium seats. I felt like it was appropriate that a guy who didn’t much care for the spotlight was memorialized in such a tiny, out-of-the-way, unobtrusive way. Worth taking the trip.Our North Dakota day was accentuated by a massive thunderstorm that delayed the start of the ballgame by a couple of hours. We didn’t get going until after 9PM, and didn’t get finished until after midnight. But hey—that only 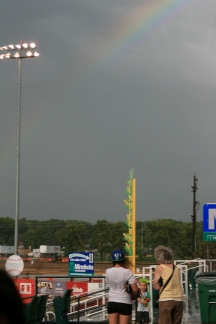 accentuates the vacation!  Plus, photos of double rainbows past the foul pole are rare: good to take advantage of those opportunities.

We sat behind the Redhawks’ dugout, and I was impressed with the team’s maturity. The rain delay meant that the fans were a couple hours’ drunker than they might have been otherwise, and there was one who was continually 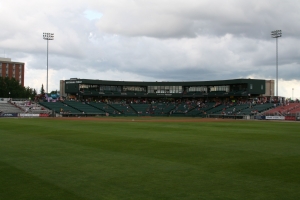 annoying people in the dugout. At first, players engaged him (he was a relatively friendly drunk, thankfully, unlike whoever threw the tennis ball at South Bend or the icky people who chanted “Ichiro” at a Korean-born player in the Tri-Cities). But it would not stop. It was relentless.  I just wanted the dude to go home, but he just kept talking, and he got a little more agitated as the night went on. In the end, I was bothered enough by it that I headed down to the dugout after the game to say I was impressed by the players’ restraint. They thanked me: said the guy wasn’t that big a deal. But I’ve been to a ton of 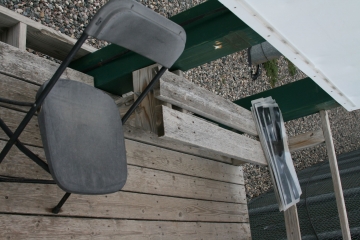 The following morning, as we left town on our way south to the other Dakota, news of police shootings in Dallas dampened our mood. As I called my Congresswoman and we discussed how awful this, as well as recent shootings of unarmed Black men by police, was so tragic,  we noticed the unmistakable massive tent of a

batting cage a couple of blocks off the freeway. There was something very wholesome about seeing that site at that moment. We turned the car around, of course, and took some cuts. There is something satisfying about giving a baseball or softball a big thwack when the world seems to be going sideways. I can’t play a lick, but it sure seems like baseball is a good way for me to feel good in a rough world. I’ll stay to it.

So nicely done, Fargo. Way to stay local, way to put on a nice, reserved show.

PAVILION AREA 3/5:
Couldn’t walk around the ballpark, but could watch the game while getting food.

FANS 2/5.
Had to deduct for the drunk dudes being jerks to the Redhawks.  REALLY overdoing it.

INTANGIBLES 4/5.
The rain delay actually added to the experience. I loved being able just to say “ah, the hell with it. I’m on vacation: let’s stay up past midnight.”