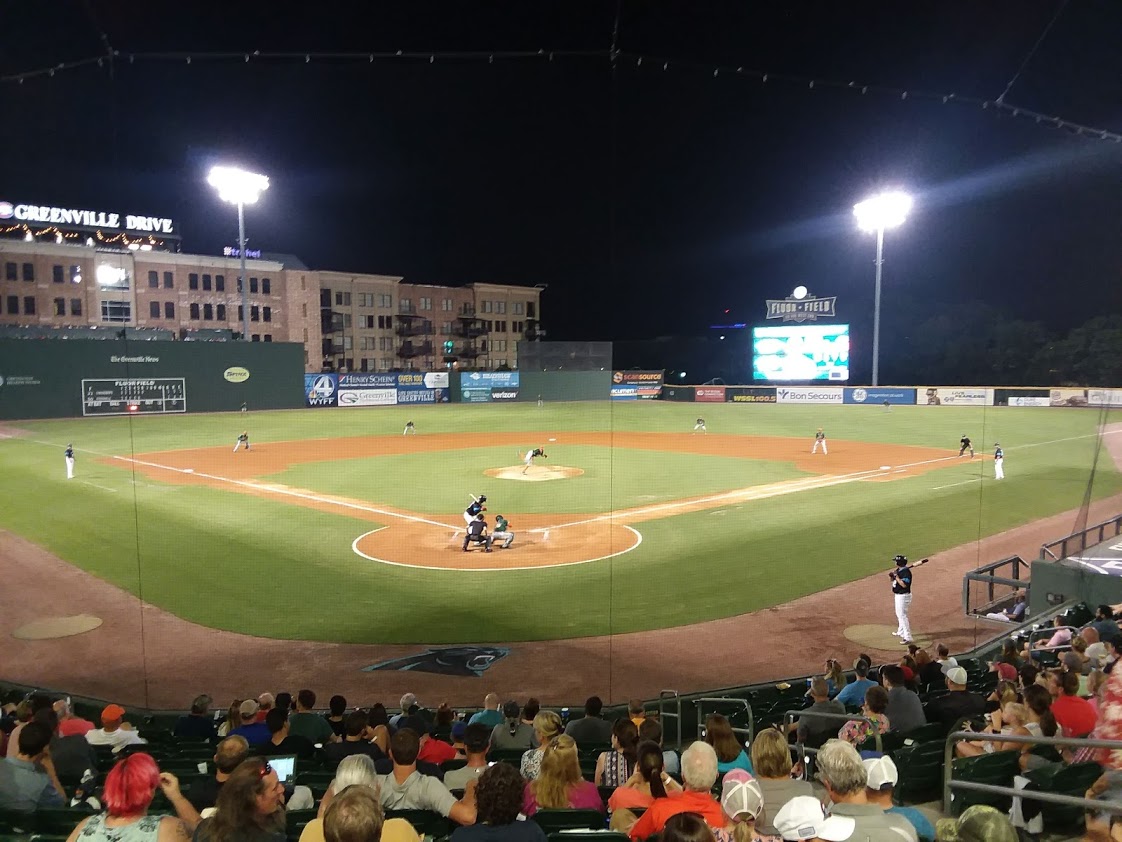 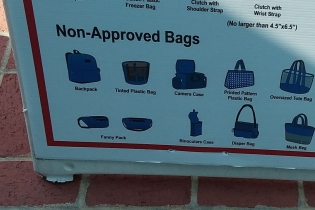 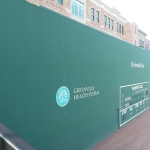 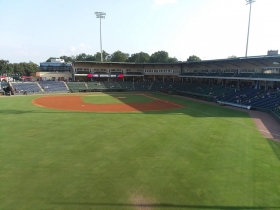 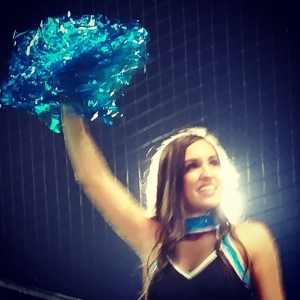 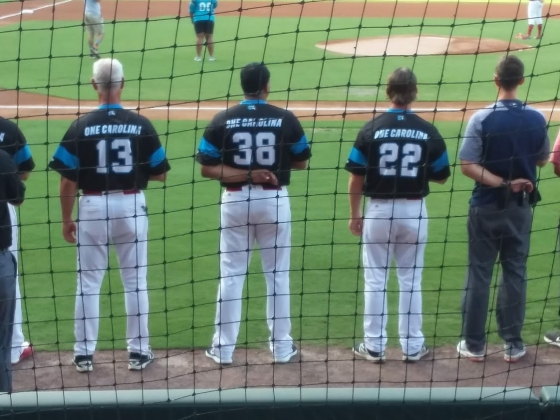 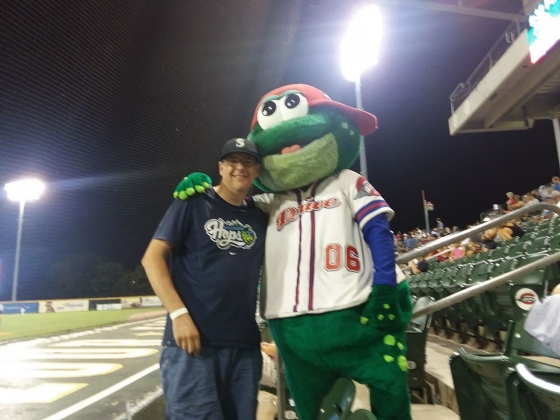 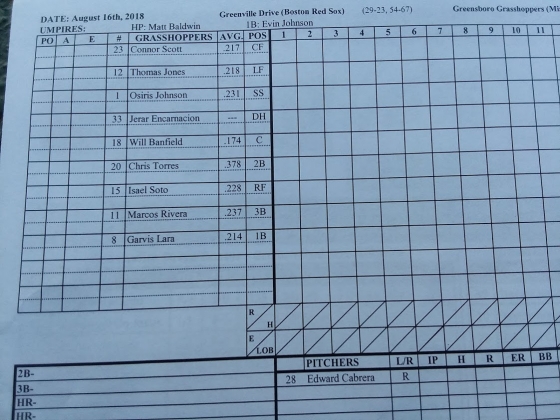 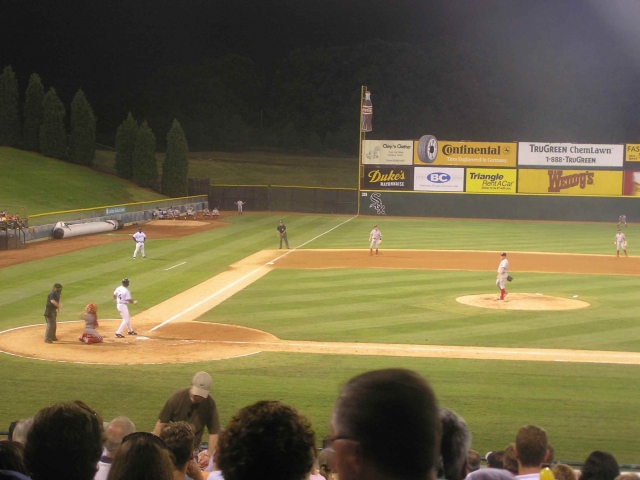 (Knights Stadium was no longer used for baseball as of 2014, and was demolished in 2015.)
(Click on any image to see a lager version.)

After a day hiking to Ellicott Rock (the place where Georgia, North Carolina, and South Carolina meet), we got to Knights Stadium a little late…the gorgeous roads through 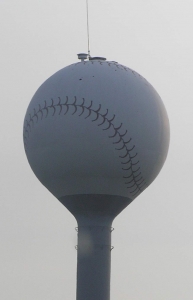 the western Carolinas take a little longer to drive across than we had anticipated.  This led to an unprecedented event in my ballpark history:  unexpected free parking.  We were in a long, long line to get into the parking lot, worrying about whether we’d make the first pitch.  We got out a 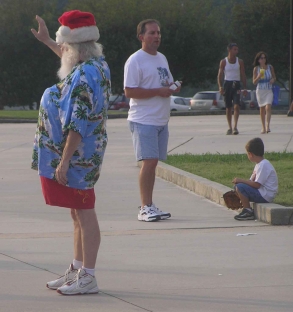 wallet to pay for parking, but when we got to the edge of the parking lot, they simply waved us in.  They passed up on hundreds and perhaps thousands of dollars to make sure that the lion’s share of the huge Fireworks Night crowd could get in on time.  I appreciate that.

We approached the stadium as they sang the National Anthem.  It was a hot night with a foreboding storm approaching.  Outside the ballpark–very active on this fireworks night–I encountered what had to be a lost, disoriented, and terribly hot Santa Claus.  I don’t think I’ve ever seen him wearing shorts before, with the possible exception of the claymation Santa reclining and relaxing in Peter Cottontail. Michelle and I made it to our seats just as the first batter, Michael Bourn, was retired.

I’m afraid the ballpark had very little special about it.  While I liked the grassy areas down the foul lines, on the whole, Charlotte felt too big to be charming,

but too small to be expansively impressive.  It was a bizarre tweener with an identity crisis.  Where many AAA ballparks try to be like small major-league ballparks–which is its own problem sometimes–Charlotte seemed to go a different direction and instead tried to be a large minor-league ballpark, at least physically.  The two decks looked like something I’d see at a small park, only bigger.  On the other hand, the ballpark took some of my least-favorite aspects of big-time parks and incorporated them.

Let me take one example of this and make it as clear as I possibly can, hoping that ballparks everywhere heed me:  There is absolutely no reason, ever, anywhere, for any ballpark to have a carousel.  I’m fine with kids running around and jumping, and I can even live with the climbing wall.  But a carousel?  Ridiculous.  The idea of taking kids to a ballgame is to get them to like baseball, not to avoid it.  From now on, if I see a carousel in a ballpark, the ballpark will be penalized.  Severely.

Scoring was difficult at Knights Stadium as well.  They couldn’t keep track of who was at bat very well, and were completely absent on a key wild pitch/passed ball decision.  I find that these are the toughest

plays to score from the stands, but the most frequently ignored by scoreboard people, which is too bad.  Beyond that, however, the Knights did a decent job putting on a show.  Nothing special–not old-school reserved, not new-school fun–just serviceable.

What I’ll remember most from this night is wondering if we’d get a game in on time.  A big storm was building up to our north and west, and we could see lightning off on the horizon past left field.  Was the storm passing us to the north, or was it eventually going to nail us?  The game chugged along, and in spite of the light show, it was rain free.  But when Charlotte tied the game in the bottom of the eighth, and extra innings became imminent, well, it became unlikely we’d get to see the game end.  The umpires held out through some impressive rain in the bottom of the 10th as the Knights got two on with one out…but a double-play ended the inning,

and the tarp came out immediately.  We didn’t kid ourselves by trying to wait…the big storm was going to end baseball that night.

Much to my surprise, the Knights went ahead and had the fireworks show anyway while everyone ran desperately through the downpour to their cars.  I wish I were a more talented photographer, because we were treated to a display of fireworks going off above lightning strikes…very impressive indeed.  Also impressive was how well my wife drove through the thunderstorm to the hotel.

The Knights are building a new downtown ballpark to replace Knights Stadium, and this is a case where one is warranted.  The location will be better, and the personality-free Knights Stadium will likely not be missed by any fans.  But I’m thankful I got there…it enabled me to cross South Carolina off my list with only a very short jaunt across the border.

Regional feel:  5/10
Were it not for the thunderstorm, this score would be even lower–but truthfully, there was no way of telling where we were.

Charm:  3/5
Not much, but not totally impaired here either.

Spectacle:  3/5
A fair number of promotions–perhaps too many for AAA.  But the fireworks in front of the lightning stay in my mind as a heck of a spectacle.

Homer.  Dumb name.  And what’s up with a dragon representing the Knights?  Don’t knights slay dragons?

Aesthetics:  3.5/5
Some trees.  Again, the score is aided by the fireworks-with-lightning.

Pavilion area:  2/5
Nothing doing.  It’s mostly cement, and where it isn’t cement, they’ve put in a carousel.  Ick.

Fans:  4/5
I liked the huge crowd, their enthusiasm, and the way they stuck around, even though many of them ran for cover at the first tiny sprinkle. Come on, Knights fans…in Seattle, we picnic in sprinkles.

Intangibles:  2/5
The ballpark, on the whole, did nothing for me.

Scranton/Wilkes-Barre took a 3-0 lead on a Josh Kroeger triple, but could not hold onto the lead.  They win in the 12th on a Brennan King home run…but by then, I’m most of the way to Bristol.