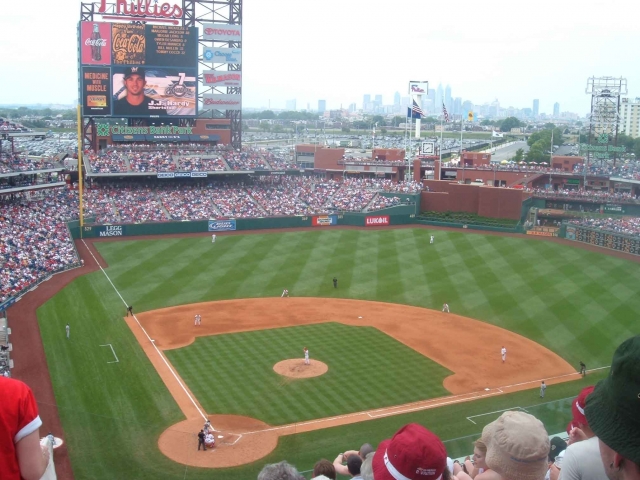 Work brought me to Citizens Bank Park for the first time–taking student debaters to the National tournament in Philadelphia.  I’m glad it did, too.  Citizens Bank Park isn’t derivative of the 1990s new wave of ballparks; it didn’t exactly remind me of Coors or Jacobs or Camden Yards.  I was glad to see that–by the time this ballpark debuted in 2004, to copy those ballparks, as beautiful and wonderful as they are, would have felt like a cop-out.  Citizens Bank Park is its own park, and a gorgeous one.  It is unquestionably a top-ten ballpark.

There are subtle but significant differences between it and the others–differences that make the ballpark unique and charming.  For starters, there’s the red brick.  Yes, a lot of ballparks are made of red brick–San Francisco’s comes to mind.  However, the red brick isn’t central to the decor as it is in Philadelphia.  And, for reasons I can’t communicate properly, red brick is gorgeous in a ballpark.  Second, Citizens Bank Park has bucked a recent trend towards baseball green seats.  Don’t get me wrong–I love the baseball green.  But it’s been duplicated enough lately that the deep blue seats in Philadelphia are a refreshing, character-giving change.

Philadelphia also has an interesting reversal in design compared to Coors Field, Safeco Field, and probably a couple of ballparks I’m forgetting.  At Coors and Safeco, fans can look out onto the field from the concourse…but only on the first level.  The upper concourse is enclosed behind the seats, and fans can’t see the interior of the ballpark from there.  At Citizens Bank Park, this is reversed.  The lower levels are enclosed, and it is difficult to see the field from there.  On the third level, one can see the field.  It’s a refreshing difference–giving the folks in the 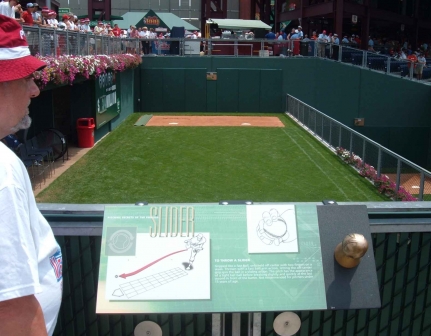 cheap seats a panorama of both the field and downtown Philadelphia wherever they are on the level.  (“Cheap seats” is a relative term, I’m afraid…the cost of a third-level seat at Citizens Bank Park was well above the cost at any park I’ve ever been to.  There are not “cheap seats” there.  Can we work on that, Phillies?)

Another creative touch in design is that fans can look directly down on the bullpen while looking at a sign that provide information about what various pitches look like.  It’s a nice touch, also, to be able to watch bullpen warm-ups from such a nearby vantage point, with no fence barrier.  All in all, the design of Citizens Bank Park is beautiful.  It integrates the texture of the game.

I was a little bit troubled by the atmosphere back in the kids’ corner…the carnival games were in danger of becoming flashy and distracting like those at Comerica Park.  But in 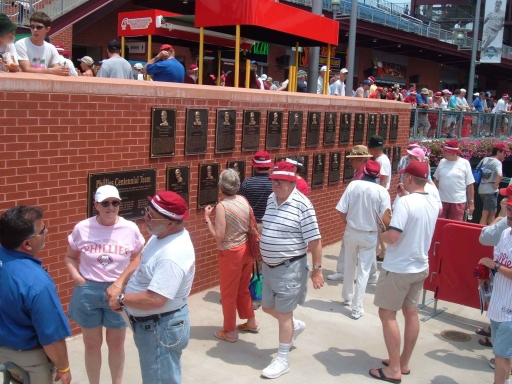 Philadelphia, it’s a little bit different…a carnival game (like the giant pinball game or the competition where kids–or adults–run in place as fast as they can to manipulate a player icon around the bases) is participatory in a way that a carousel or Ferris wheel is not.  For whatever reason, it felt like a celebration of baseball rather than an escape from it, so I don’t view it as a strike against the ballpark. 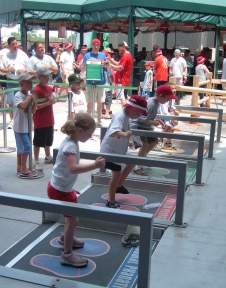 the brick wall in center field about Phillies and Philadelphia Negro League history.  “Ashburn Alley” is an excellent example of an open outfield pavilion area, all surveyed by a statue of Richie Ashburn.  Perhaps best of all is the bullpen.  This is consistent with the 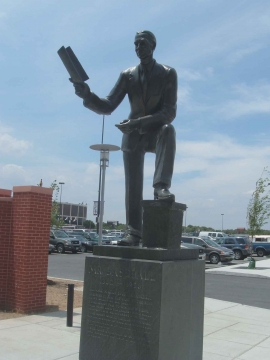 ballpark’s sense of history throughout…there’s a statue of Connie Mack outside the ballpark, put up by a group dedicated to promoting Philadelphia A’s history (what there is of it, anyway).

In addition to the design, the atmosphere in Citizens Bank Park further adds to its charm.  I’ll admit I had a preconception of Philadelphia and its fans coming into my visit.  I was expecting the fans to be rude and surly throughout.  It was in Philadelphia, after all, that Santa Claus was booed, J.D. Drew risked bodily harm, and even Mike Schmidt faced chants of “Choke!  Choke!”…from his child’s classmates on a school bus. So, when my smart and smart-alecky debater boy decided this would be a good place to root for the visiting team, I let him know he was doing so at his own risk.  It didn’t turn out to be a problem…we didn’t get a cross look all day.  Maybe it’s because the Phils were playing Milwaukee that day, and nobody could reasonably expect any human being to actually root for the Brewers.  They knew my student was faking it.  But I don’t think so.  I 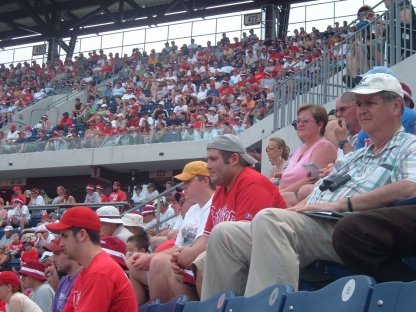 think, quite simply, that these were genuinely cool baseball fans surrounding me on this unconscionably muggy Sunday afternoon.  Case in point:  As I walked to my seat, I passed a couple of Phillies fans talking on cell phones.  Usually, in other cities, this turns me off–I hear snippets of business deals or stupid “Yippee!  I’m at the ballpark!” talk.  Both of the individuals I passed at Citizens Bank Park were talking baseball…the day’s pitching matchups, the Phillies’ recent hot streak, and the like.  It was a fine group of intelligent, engaged, dare-I-say pleasant fans.  I hate to blow Philadelphia’s hard-earned reputation, but I’ve got to call it like I see it.

So, all in all, an excellent day at a fine ballpark surrounded by good baseball fans.  Who could possibly cry over the loss of Veterans Stadium when they have this gorgeous ballpark to replace it?

Chase Utley’s 3-run homer in the 8th supports Corey Lidle and busts open a close game in my debut here.

One of the craziest games I’ve ever seen in my return trip in 2019. Only 4 total hits through 8 innings, and the Phillies have a 1-0 lead on a solo shot by Bryce Harper.  Closer Hector Neris coughs up the lead with three in the top of the ninth, but then Mets closer Edwin Diaz coughs it back. Maikel Franco ties it up with a two-run homer, and then Jean Segura wins it with a walk-off three-run bomb.  1 run on 4 hits in the first 8 innings, then 8 runs on 8 hits in the 9th.

Notable: As of 2021, I have seen the Phillies play at home four times in four different decades…and win all four games. 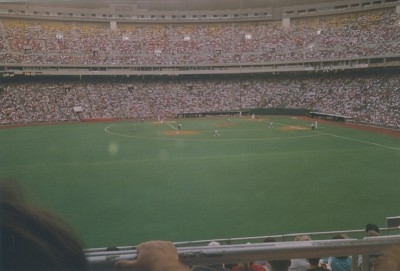 Veterans Stadium was demolished on March 21, 2004.

First the stadium:  see Busch, Three Rivers, and Riverfront.  A circle.  Turf.  Boring.  The Phillies have since moved out of here, and that’s good.  No reaction whatsoever to this cookie-cutter ballpark.  That’s it for the stadium.

The Vet, however, marks the first time I ever took a date to a baseball game.  When you’re as much of a glove-wearing, game-scoring nerd as I am, the first game is a little bit of a worry.  The general rule for me is, unless the woman spontaneously indicates an affinity for baseball, to wait until I know her at least a month before letting her see me in this context.  Shelly met this standard.  I’d known her for a couple of years.  She was a close friend of the woman with whom I was to be living in sin that summer–the one whose breakup with me sent me fleeing to the stadiums in the first place.  Shelly did the absolute best thing possible for a man in my situation…she seduced me (or let me seduce her–the line is awfully blurry).  This love connection, I believe, was very good for me and probably not so good for her in the long run.  She volunteered herself to be the primary stop on the Erotic Love and Baseball Stadium Tour.  She flew down to Pittsburgh from her place outside of Cleveland, drove with me across the state to Reading, where we house-sat for friends of hers, then drove with me back to Cleveland.

This would be the only week I would ever spend with her one-on-one.  We spent one day of touristing in Philadelphia.  Me and the tall redhead.  We looked good.  We looked happy.  We must have been stopped ten 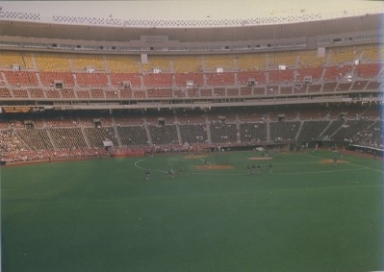 times by horse-and-carriage-ride offers. We saw everything there was to see.  We tried to get to the stadium and accidentally wound up in New Jersey.  She put up with my reaction to the stress of being lost in a strange town.  We righted ourselves and put ourselves in the left-field bleachers.  She did the Kids’ Page in the program…every maze, every fill-in-the-blank crossword.  She said the Phillie Phanatic was sexy.  She took me back to Reading.  She took me to bed.  She drove with me to Cleveland–even went with me to another game there.  She listened to me rant.  I was a mess.  She took me for a weekend at a condo by Lake Erie (actually very beautiful in the summer).  She took me to back to bed.  She kept my car at her place while I took the train across the country to Chicago, Milwaukee, and Montana.  She picked me up at the train station at 2:30 AM when I returned.  I was still a mess. She took me back to the lake, back to the condo, back to bed.

How does this all turn out even?  This relationship where I whine about my ex nonstop, and this brilliant, gorgeous woman not only puts up with it, but also repeatedly seduces me (or is seduced)?  Maybe she intentionally did this to set up her life so that she was owed so much relationship karma by the time we were through that she would be due a fantastic permanent Prince Charming.   Our inevitable ugly falling out came a few months later, and she went on to become a minister at an inner-city church.  Maybe this betrays that she has a thing for the needy, because that’s sure what I was that summer of 1993.

I don’t want to make Shelly out to be a saint–she had some significant problems that were especially evident in the ugly falling out.  And now that I gather my thoughts on my time with Shelly to write this, it all looks terribly messed up, but it surely didn’t feel that way at the time, perhaps because of our youth.

The Braves/Phillies matchup turned out to be a preview of that year’s NLCS, and the Phillies’ victory anticipated the result.

Pete Incaviglia hits the difference-making three-run homer in the fifth inning.  My fellow left-field fans cheer him passionately when he runs out for the following inning.

Francisco Cabrera hits an absolute monster homer into the upper-deck above me.

Mitch Williams gets the save.