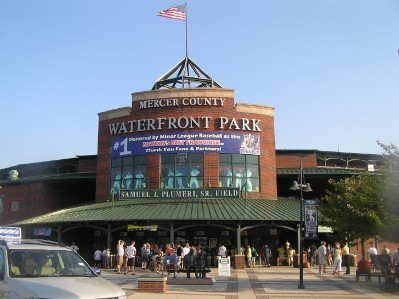 (Mercer County Waterfront Ballpark is now known as Arm & Hammer Ballpark.)
(Click on any image to see a larger version.)

It is indeed a challenge, I learned back in August of 2007, to make it from the Philadelphia Airport to the Mercer County Waterfront Ballpark for a game…but it is, indeed, possible.  Because the 2007 baseball trip was the

first in my history that involved no driving (in an effort to be both cheap and green), I dashed from my flight to my SEPTA train in perhaps record time.  Since I had no luggage to check, I made it onto a train that left only ten minutes after my flight arrived.  And since I wanted to be totally sure that I could legally hop onto the train downtown (for a transfer to Trenton), I even asked the man who was working on the ticket machine…could I buy a ticket on board?  Yes, he told me.  Well, nobody asked me for money or a ticket or proof I belonged there or absolutely anything else all the way to Walnut Street, where I detrained, feeling lucky and a little bit dirty.  If anybody from SEPTA happens to read this, I owe you seven bucks or whatever it was.  I wasn’t trying to dodge a fare (as should be noted by the way I duly paid my way from downtown Philly to Trenton).  I asked if I could pay on the train, got on, and then nobody asked me for a cent.  Please do not prosecute me.

happen to be crashing on their park directly from the airport, I learned.  The Thunder were nothing but nice to me.  I phoned ahead to ask them if I could keep my bag somewhere during the ballgame and pick it up afterwards…I had no time to get to my hotel prior to the game, as I simply took a cab from the train station to the ballpark.  I therefore got to meet several of the fine folks from the Thunder, who didn’t seem to mind when I had to unpack a lot of my suitcase to get to my hat, scorecard, and pencils (and thus unwittingly let some of the fine folks of south Jersey see a few pairs of socks and underwear).  Indeed, after the game, they were nice enough to call me a cab, and when that cab never showed up (the dispatcher seemed to have far more important social engagements than to help me), a worker

told me that the nice hotel I had treated myself to, the Trenton Courtyard by Marriott, would routinely send a van to the ballpark to pick up a guest.  Sold!  So, even if it weren’t a great ballpark, the Thunder won me over with fine 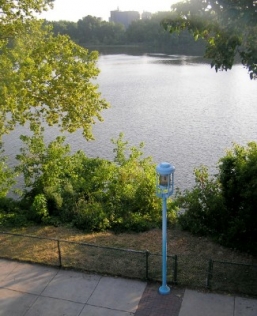 The good news for them is that they work at a splendid ballpark.  I was a big fan of Mercer County Waterfront Park almost from the moment of my arrival.  I was a little bit concerned when my cab took me through slum after slum until we were just a few feet from the ballpark, simply because I was worried that the ballpark would have a Comerica Park feel…a baseball theme-park fortress designed to get me to ignore the urban blight around me.  But it didn’t have that feel, I think because of the immediate surroundings.  The ballpark is right on the Delaware, so if George Washington were a lefty pull hitter with power, he could knock one into the river (although likely not over).  It’s possible to walk along a path between the ballpark and the river, and some of the crappier seats in the ballpark offer a view across the river of Morrisville, Pennsylvania.  And with some rowdy fans on hand (the Yankee-affiliated Thunder were facing the Red Sox-affiliated

Portland SeaDogs), there was no question where I was.  The ballpark therefore aces the important Is There Any Question Where You Are test.

A look at their retired numbers tells the story–Nomar Garciaparra and Tony Clark share billing with Jackie Robinson.  The idea that a ballplayer best known as a Red Sox gets a nod with a retired number at a Yankee-affiliated ballpark tells me that they have their priorities straight–Trenton first, parent club second.  Additionally, I was struck by a female name, Nicole Sherry, on their list of former Thunders (what is one member of the Thunder called anyway?  A Clap?) who have made the show.  A quick

Google search reveals that, after two years in Trenton, Sherry went on to become head groundskeeper for the Orioles.  It’s great that they give her some recognition.

I got one of my favorite seats on this night…in the very front row, in a seat that juts out from the main stands into foul territory.  I could look back into the Trenton dugout from my position, but more importantly, I got an opportunity to watch the work of the first-base umpire (whose name I can no longer locate) quite closely.  No close plays transpired at first this night, but I enjoyed seeing the difference between his regular “out” call and his sell “out” call.  On the former, he wouldn’t even vocalize at all, but on the latter, he sure would.  On top of that, I got to enjoy all of this while taking advantage of the significant ledge in front of me as a table:

A cheap cheese steak, a FREE scorecard, a gorgeous night on the river, and up-close double-A baseball.  What more can a guy ask for?

Hell of a nice night at Mercer County Waterfront Park.  If you’re in Philly or South Jersey, it’s worth the trip up.  It’s definitely one of the top ballparks I’ve been to on the East Coast.

Regional feel:  9/10
On top of everything else the ballpark had going for it–the river, the cheese steak, the retired numbers–they have concession stands shaped like commuter trains.  Nice! 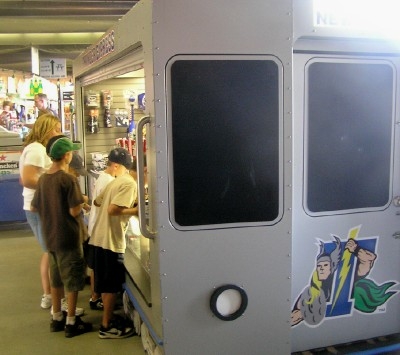 Charm:  4/5
Quite nice.  Might have scored even higher were it not for the nearby urban blight.

Spectacle:  4/5
I know there were some promotions, but I can’t remember them.  That’s a good sign for quality double-A ball.

Boomer with handler.  Nothing special about him or his name–I can’t even tell what he is.  Also, I’m not a fan of the name “Thunder.”

Aesthetics:  4.5/5
Quite a nice place right there on the river.

Pavilion area:  4.5/5
I especially like the places where the river is visible.  And I’m sort of counting the river walkway outside the stadium.  It’s my party and I’ll break my rules if I want.

That’s right…FREE SCORECARDS.  And they say to PLEASE take one.  Then, they follow that up with conscientiously-placed scoring decisions, including the too-often-skipped wild pitch/passed ball calls.  One of the best ballparks I’ve ever been to in this regard.

Intangibles:  4.5/5
It was a splendid night.  This is a ballpark I want to visit again.

Gabriel Lopez is the batting star for the Thunder, going 4-for-4 with 3 RBIs.

Andrew Pinckney homered for the SeaDogs.