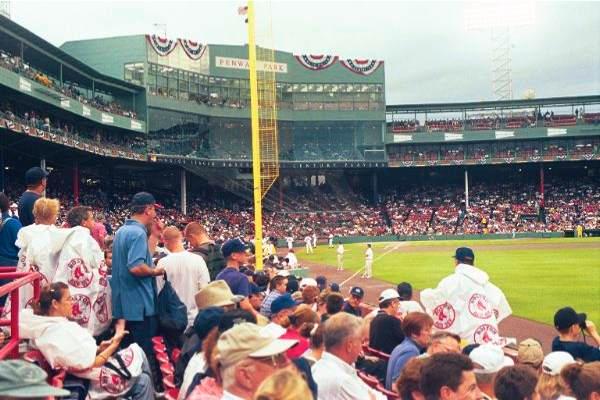 You don’t need me to tell you the historic nature of this place, or its importance, or the sad, sick personality disorders of lifelong Red Sox fans.  I attest to and love all of those things, but I don’t feel they need to be repeated here.  If you’re looking for writing about that, pop in a tape of Ken Burns’ Baseball and put the continuous loop on Doris Kearns Goodwin’s speeches.

What I will attest to, and try to describe in the next couple of paragraphs, are the place’s physical beauty and ambience.  I don’t know what I was expecting when I walked in that July night–quirkiness?  charm?–but I know I wasn’t expecting the place to be so beautiful.  Clearly, they take care of Fenway the way some families take care of antiques.  The image I most remember is the fresh red paint on the turnstiles, for goodness’ sake.  I loved the green of the facades, the pillars, the Monster–it’s not the darker green of the new retro parks, but has faded just enough to make it look venerable, loved, well-used.  I loved the angles of the seats, even though they made me torque my body from my seat (just to the foul side of Pesky’s pole and six rows back) to see the batter–otherwise, I would have spent all night looking at right fielders Trot Nixon and Mark Kotsay.  I kept on wondering–am I just carried away?  But the more I looked at the place, the more I realized:  nope, I’m not carried away…this place really is that beautiful.  Even a baseball-illiterate dropped in from Borneo would find the colors and shapes fascinating. 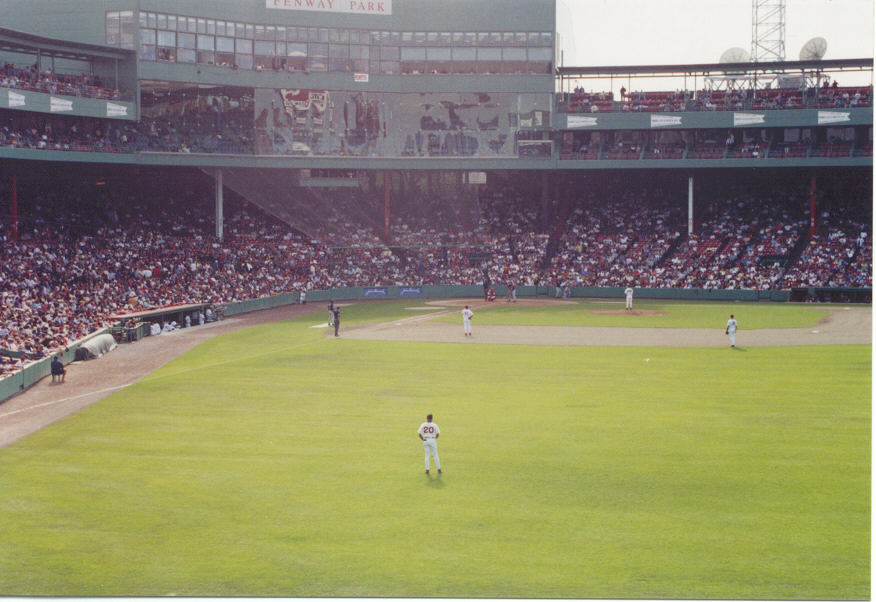 As gorgeous as the place is, its ambience trumps its beauty.  Starting with the walk from the T station…you’re not more than ten yards from the exit when you see the guy hawking hats in that inimitable Boston accent.  He mutters every word except the “Red” in “Red Sox,” which he shouts out at five times the volume and an octave and a half higher:  “RED sawx caps heah…lower than stadium prices…we’re gonna beat the Orioles today…get your RED sawx caps heah…”  This gets me psyched for the walk across the bridge, across Landsdowne Street, past the Citgo sign, even to the sports bar where my friend Larry and I waited out a rain delay (and where we accidentally left our tickets…thanks to the waitress for fishing them out of the wastebasket when we desperately ran back…her tip suddenly tripled!)  Then in the park, no tapes of rhythmic clapping telling fans when to get excited.  Just a game.  When the seventh inning stretch comes, nobody shouts out “All right, up on your feet!”  The organ plays “Take Me Out To The Ballgame,” and everybody knows what to do.  Unlike Wrigley Field, they have installed a scoreboard with stats and pictures, and I’m just young enough to view that as close to mandatory when it’s used to add to the game (and not, for instance, to tell fans when to cheer).  The neighborhood, the park, the rabidness of the fans (maybe some year I’ll make it in for a Yankee series)–it’s all perfect.  Fenway was so wonderful that it overcame two cold nights, an interleague opponent, a rain delay, and lackluster play by the Sox.

Kerry, my favorite Kingdome baseball date, was kind enough to get me tickets and go to the games with me.  Clearly, I should have anticipated disappointment.  Three years and a few relationships later, I set my sights on having as much fun as we did in Seattle in ’96, but she was into trumpeting her independence that summer.  She was no longer in need of outside esteem-boosters like me, and made it a point to show me that at every opportunity.  She even made certain to rip on me repeatedly–it seems, during my three-day outing in New York, that I had gotten her a low-quality Yankee hat.  “I would have paid for the nice wool one.  You should have just spent the money.”  Four apologies and two “knock-it-offs” later, she was still needling me for that one.  Well, if you’re going to be catty and snide, I guess baseball cap quality is as good a place as any to do it.   The deal-breaker was when she didn’t show up to the Oriole game until the fifth inning.  (“I was busy at work, and I don’t have a clock in my office, and I got carried away.”)  I mean, I’m fine and all–I’m at a baseball park–Fenway Park.  But I wanted to be there with her, and it upsets me that she didn’t put in a little more effort to be there.  It’s sad, really.  I told her I felt far closer to her while writing emails from opposite coasts than I did while sleeping in the same bed as her in Boston.  And maybe I’m to blame for trying to recreate moments from an obsolete time and place (hey, we all do it).  But nevertheless, I’m sad at the results.  We were very close before the trip, but we haven’t been the same since I was there, buying her the wrong hat, feeling far away from her, and, perhaps most telling, watching five innings of a ballgame next to her empty seat.  We don’t talk much anymore.  And in whatever proportion the blame for that should be dealt out, that end result is a shame.

No homers over the Monster.  In fact, the only homer in the two games was to the deepest part of the ballpark, straightaway center, by Preston Wilson.

Tomokazu Ohka makes his first major league start, and gets roughed up pretty severely by the Marlins, lasting only one inning.

A good pitchers’ duel between Bret Saberhagen and Mike Mussina that the Red Sox bullpen (most notably Derek Lowe) blows late, giving up 6 runs in the seventh and eighth innings.