(Click on any image to see a full-size version.)

I don’t get to games late very often, but on this day it couldn’t be helped. After a killer walk-off crazy game at Citizens Bank Park, Rob and I had to grab Matt at the airport and then head north through some horrible traffic to get to this one. We did well to arrive at the end of the first inning. Because of the uncertainty of it all, we didn’t have tickets, so we got to buy on the way in.

“Any preference?” the worker asked. 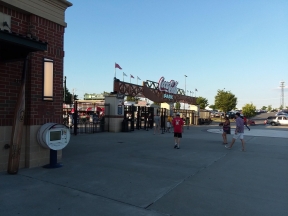 “Whatever you think is best,” I replied.

We were placed down the right-field line, which is fine, but wound up staring straight into the sun to see the batter. Even with shades and a ballcap, we wound up also having to use our hands to block the sun. It was even a safety issue: once the ball left the bat, I had no idea where it was. The sun is obviously not the IronPigs’ fault, but I do wish that the guy selling us the tickets had told us about it.

The ballpark itself had some promise. It sits atop a pretty cool hill, and I liked the promotion of the park to that level, like it was some European castle. I didn’t notice any real views, however, from the seats or on my wanderings, so it didn’t seem to 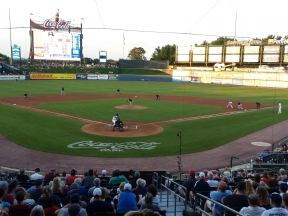 have any real advantages to it.

Kudos to the IronPigs for packing them in on a Thursday night. Not many empty seats (which may explain our location, of course). But there was a weird cultural thing going on that was especially clear in comparison to the Phillies game from earlier that day.

In Philadelphia, there was minimal interference with the game. Sure, they had their wackiness (jet-ski races on the scoreboard, trivia, 50/50 raffle, that sort of thing), but it was on the scoreboard as an option rather than blasted over the speaker, creating an expectation that everyone would watch. It was easy to watch the game and not feel like it was a 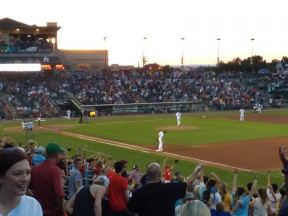 Not so much at Lehigh Valley.  There was wackiness all over. And while I might have put up with that at the rookie level, at triple-A, less is more.

Case in point: the team name. I don’t have much trouble with “Iron Pigs” as a name: it seems that “pig iron” is an important factor in the creation of iron that Allentown is best known for. Thumbs-up. But oh man, they focused on the absolutely wrong part of the team name. Everything in the park was about the “pigs” rather than about the “iron.” There was bacon in the team logo, pigs and bacon all around the ballpark, a pig mascot with no hint of iron around her (that I noticed, anyway).  And the sounds. Oh, the sounds.  Between pitches, even, I’d hear pig grunts and snorts. A “sooeee” call. Outside of Fayetteville, Arkansas, I felt like this was disruptive. I could handle it once as a joke. But repeatedly?  Over and over again, that pig grunt kept going, and, in my eyes anyway, it was disruptive and annoying. 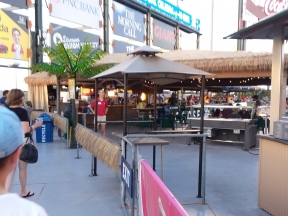 And fireworks.  No problem with fireworks, but the IronPigs had a “more is more” attitude about them. They set them off after every run the home team scores. This led to a delightful moment when Red Wings reliever Jake Reed balked in a run. The crowd had no idea what had happened, which is fine, I guess: balks are confusing. But then, as everyone was turning to each other and saying “What’s going on? Why is everyone standing around? Is that guy going home?” there’s a big BOOM!  Balk fireworks. First time for everything, I guess.

It was some kind of soccer-related promotion night–appropriate in the heat of the 2019 Women’s World Cup (and the day before a huge US/France quarterfinal). This meant that they continually played clips from the sorta-funny 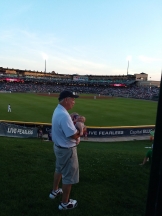 Will Ferrell movie Kicking and Screaming on the big screen, and that they also had soccer-themed promotional contests on the field. It seemed pretty clear that the person they had running one contest wasn’t that familiar with soccer, however. Kids were trying to head soccer balls into trash cans for a prize. But instead of “Try to head the balls into the cans,” she said “Try to head-butt the balls into the cans.” Head-butt?  Really?  Did she want the kids to go all Zinedine Zidane on each other? (A worthy promotion, perhaps…)

The problem here was that the entire crowd seemed to follow along. No real interest in the game here. Kids were screwing around, 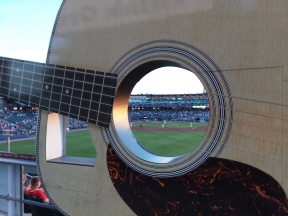 everyone was chatting, and I didn’t get a sense that baseball was important there. That seemed to be popular, but again, the net result wasn’t something I was a huge fan of.

Rob and I, punchy from the red-eye and in our second game of the day, managed to get by (I had gyros) while Matt watched the AAA affiliate of his Twins have a strong evening.

A good day at the ballpark on the whole, but my overall instinct is that the IronPigs got too cutesy. Sandwiching this around the baseball-first atmosphere of their affiliated siblings, the Phillies and the Reading Fightin’ Phils, showed how off this was compared to a pair that were right on. I hope the culture changes a little, but given the attendance, I doubt it will. Different strokes for different folks, but as this is my website, they get a lower score than the other strokes do.

Regional Feel: 3.5/10.  Not much to be said about Allentown or Steel Country here. They got it exactly wrong: too much pigs, not enough iron.

Charm: 3/5.  Some nice bits all around, and a lovely sunset.

Team mascot/name 3/5:  Would have worked better if they’d focused on iron rather than pigs. Extra credit for naming the mascot FeFe. Love nerdy puns.

Aesthetics 5/5:  Lovely location on top of a hill. Quite lovely.

Pavilion 4/5: Nice here, although a little cutesy in places.

Fans 2/5:  This was the group that would have done anything the PA said. Especially compared to what I saw in Philadelphia the previous day, this was an annoyance.

Intangibles 3/5:  The sunset overrode a lot of negatives.

BASEBALL STUFF I SAW HERE:  Rochester builds a big lead, in part based on Zander Wiel’s big bat (three hits and a home run). But the IronPigs fought back, mostly with a Phil Gosselin three-run shot, to tie. But Rochester plates two in the ninth on an error and a wild pitch, then holds on for the win.