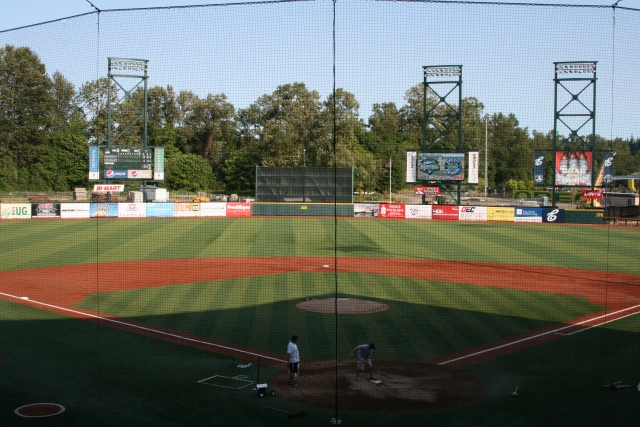 I can’t believe that 2012 was the 10th time that Michelle and I hit the road to do a July 4th Minor League Road Trip.  It’s getting a little harder to find a team within striking distance (since I eschew going to the same stadium twice…at least for now…), but since the Emeralds moved from Civic Stadium to their new digs in 2010, a 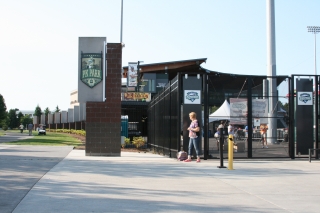 trip to PK Park was an easy decision in 2012.  We packed up two kids and headed down I-5 for some baseball and fireworks.

I had such mixed feelings about Civic Stadium, and those mixed feelings re-emerged about the new ballpark.  I really enjoyed the rustic feel of the old place, but didn’t enjoy the cramped feel or the sense that I could burn to death at any moment.  A new ballpark was absolutely essential, and yet I was worried that a new ballpark would be so similar to other places that I would no longer feel like I was in a special place.  Additionally, I had some concerns about the Emeralds sharing a facility with the Oregon Ducks.  PK Park was built primarily on the emotion of envy.  When Oregon State won a couple of College

World Series, the Ducks, who had played baseball as a club sport for years, suddenly wondered “why not us?” and built a state-of-the-art facility to attract talent to try to duplicate the Beavers’ success.  (As of 2012, that success looked like it was on the edge of coming: the ’12 Ducks were within one win of making it to Omaha.)  In fact, according to the Ducks’ athletic department web site, PK Park is named for former duck AD Pat Kilkenny.  This fact surprised Michelle and me, who would have bet a C-note on the PK standing for Phil Knight.  He’s built everything else related to Duck athletics…why not this?

In any event, I was concerned that PK Park would have the same shortcomings for Northwest League ball as some spring training ballparks (such as this one) have for 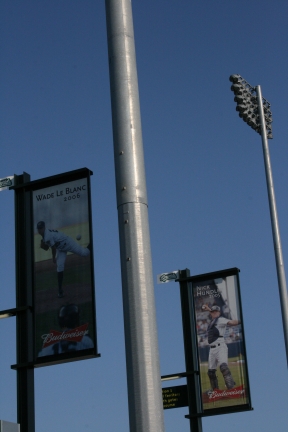 Florida State League ball.  In other words, I don’t like the minor league team to look like they’re just there at the whim of the REAL home team.  But the Emeralds (and, I think, the Ducks) did well to nearly scrub the place clean of any Duck identification.  There were some that could not be avoided:  the looming presence of Autzen Stadium next door, for instance, or the green-and-gold decor, or the Pac 12 decals on the walls behind home plate.  But this felt like the Emeralds’ home rather than a sublet.  The Emeralds’ Hall of Fame was quite well-done: huge banners honoring great Emeralds of the past.  It didn’t matter whether the players went on to greatness with other teams (Ryan Freese, Mike Sweeney) or if they were just MVP for a Northwest League season, never to be really heard from again.  Everyone got a huge banner, and I liked that.  I am pretty sure that those banners are replaced by Duck banners during the NCAA season, which is fine.

Perhaps most telling were two busts of ballplayers I spied…BEHIND a table where an Emeralds worker played the spin-the-wheel-and-get-a-prize game.  I asked her if I could go back there to see the sculptures, and I did…where I found two Ducks.  Net result: they were actively trying to prevent spectators 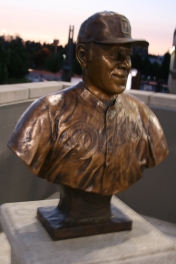 Not that the crowd cared much.  This July 4 crowd was there to party.  One of the biggest cheers of the night was when it was announced that the beer sales would be extended through the ninth inning (I would imagine because they figured everyone could sober up during the fireworks show).  And I had this bizarre exchange with a random fan when I was walking 3-year-old Steven around to look at the Emeralds Hall of Fame banners (the kid LOVES that shit).   We had just looked up at the banner commemorating Cory Luebke’s stellar 2007 season for the Emeralds when a fan with a beer talked to me.

The more I think about that exchange, the stranger it is.  He had to overlook the “Emeralds Hall of Fame” label on the banner, the fact that the guy was wearing an Emeralds jersey, the “2007” label, and the fact that the dude was PITCHING in 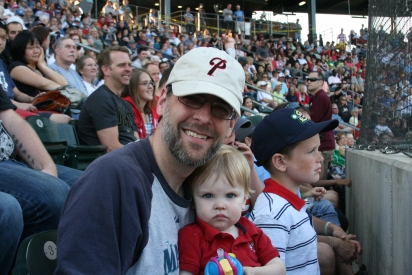 the photo.  But even if you overlook all of that, his assumption that they’d make a 10-foot long banner for the Beer Batter (the dude on the opposition who reduces beer prices to $3 for 15 minutes if the Emeralds manage to strike him out) is comical, because they’d have to make a giant banner for every single game.  Seems like a breathtaking waste of resources.  I think that this fan is a little like my students who draw nothing but marijuana leaves on every piece of paper they see.  He just had beer on his mind so much that everything he sees became beer.

But I still feel that this was a good crowd.  I can forgive some non-baseball attention on July 4th Fireworks Night.  And I also was surrounded by some pretty awesome people playing with both of my children.  16-month-old Aaron looked over my shoulder and flirted with the entire row behind me at some point, doing high fives and “ET Phone Home” index finger touches with anyone who wanted to all night long, as well as playing “I’ll drop something, say ‘uh-oh!’ and smile at you until 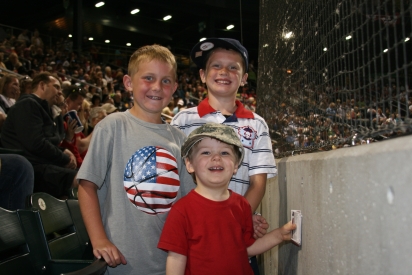 you pick it up” until I put the kibosh on that.

The approximately 6- and 7-year-0ld kids on my left to a liking to Steven and played with him all night long.  They were blown away that Steven could read the scoreboard.  Listening to their conversations were hilarious.  The kids would read a baseball card to Steven, and Steven would tell them what team he played for, and even correct their pronunciation.  Then, one kid said that he had been to Safeco Field for a game: a pretty good feat, actually, since Eugene is about 5 or 6 hours down the road from Seattle.  I was ready for Steven to talk about the games he’d seen at Safeco, but instead, he said “I…have…been………to Idaho.”

I couldn’t stop laughing.  Where the hell did that come from?  Michelle suggested that Steven said 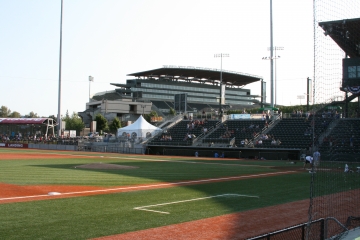 this because he’s been to so many ballgames that they’re not as special to him as Idaho.

The kids were impressed enough with Steven that they offered me a straight-up trade of him for their little sister.  “She’s four and she can’t even read yet!”  I declined.

In the category of “strangest conversation

with an on-deck batter,” I nominate my son and the Emeralds’ Ronnie Richardson.  This game was in the midst of a huge beard obsession for my son.  When his two obsessions–baseball and facial hair–meet, things get pretty intense.  He’d look at on-deck batters and we’d say “Steven, what do you want to say to him?” and he’d cheer (not loud enough to be heard four feet away) “Go, River!” or “Get a hit, Jason!”  But for Richardson, Steven said he wanted to say “I like your beard!”  So, when Ronnie turned to face us–just on the other side of the netting–I said to him the following:   “Mr. Richardson, my son says he likes your beard.  And he’d know…he LOVES beards.”  Ronnie was kind enough to reply with what I believe to be the only possible reply:  a bewildered smile.  I hopethat both he and his beard go far.

As for the Emeralds’ atmosphere, it was fine. 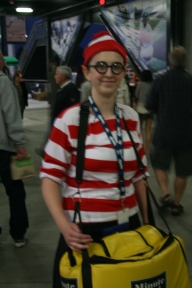 The on-field stuff was appropriate for single-A ball…stuff between  innings that’s pretty fun and funny.  The ballpark itself was a little antiseptic and reminiscent of every other new small ballpark out there, and it’s a little hard to tell that you’re in Oregon outside of all of the Duck-related color and sights out there.  This makes the ballpark a little difficult to score on the “is there any question where in the United States you are” contest.  On the one hand, there’s nothing in the land that says “Western Oregon” like there was at Civic Stadium.  But Autzen Stadium and the green-and-gold attached to the Ducks’ soccer facility beyond right field does indicate Eugene, which is difficult to extricate from its university as any university town is.  But then, as I said before, I don’t want to feel like I’m at an NCAA event.  I want to feel like I’m at a Northwest League game.  Confusing! 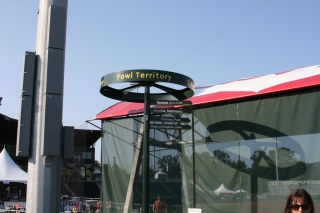 But still fun.  My family and I had a great time hanging out into the night.  It was worth the 1:30 AM arrival home.  We’d never been out with both kids sleeping in the back seat as we drove late into the night before.  I liked that feeling.

We will almost certainly be back.

The antiseptic corporate feel of the place didn’t say “Oregon” to me, but there’s no doubt the place is in Eugene due to the U or O everywhere.  However, as I say above, that’s a mixed blessing, one which the ballpark dodges with some success with its focus on Emeralds’ history.

Turf is not charming, but “Fowl Territory” is nice.

Pretty good overall.  This is the second time Michelle and I have been underwhelmed by an Emeralds’ fireworks show, however.  It might be time for them to seek out a new vendor.

Not sure what Sluggo (right) is.  The giant tree on the left is pretty nice for liberal Oregon and inflates the score, Stanford Tree be damned.

Works fine–a few things to look at.  Still, I’d like to be able to walk around the ballpark, and there were many, many stairs–way more than I’d like–to get anywhere distant.

PK Park did an excellent job here.  I managed to score the game very nicely even while wrangling two boys, and that’s in good part due to the efforts of the crew there.

A tad rowdy, but most were very good to my children and having a good time. 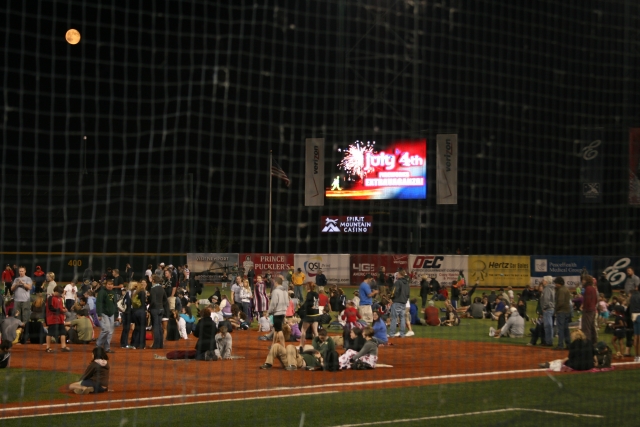 Had a good night there–one my kids will remember for a while.  Us too–both kids fell asleep during fireworks while my wife and I held hands.  Can’t argue with that.

Justin Hancock,the starting pitcher for Eugene, was the player I was most impressed with tonight. He threw 5 innings of 1-hit ball, striking out 7.

Jeremy Baltz carries the biggest stick of the night, driving in three runs, two with a double.

Ronnie Richardson and his nice beard score on a big hit in the eighth:  Richardson doubles, then scores on a throwing error by the AquaSox’s Chris Taylor on the relay throw.