(Joe Davis stadium is no longer used for baseball as of the 2016 season.)
(Click on any image to see a larger version.)

It had rained all morning the day we headed to Alabama, but cleared up significantly in the afternoon.  I went back and forth all day on whether there would be a baseball game played that night.  Even as I walked up to the stadium, I thought that maybe there was a shot at a game.  The lawns surrounding the stadium were dry to the touch.  But the game was cancelled–unplayable fields.  Which led my wife and I to speculate:  how could the field 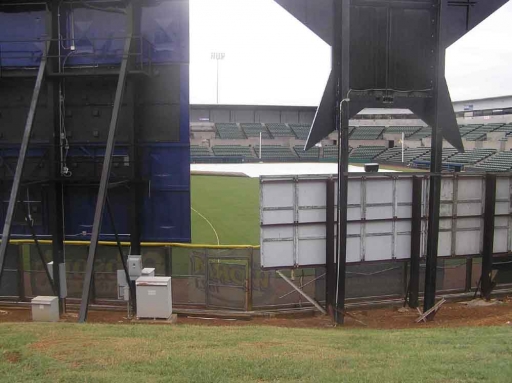 be unplayable when the lawn outside was nearly dry?

Our conclusion:  in spite of the forecast, somebody must have forgotten to cover the infield before the rain began.  Not impressive.

The Stars were running a promotion that day where fans could get in free with a donation to a local food bank.  Workers for the food bank were outside taking canned food and exchanging it for tickets to future games.  These nice people said I could probably find someone to talk to at the ticket office.

I wanted to ask for two things, both of which were longshots.  First of all, I wanted to see if I could get a refund for our tickets.  In the past, efforts to do this had been a mixed bag, but I was deeply appreciative last year when the folks in San Diego offered refunds for their freak rainout for anyone from out-of-state.  I understand that baseball teams have to make a buck, but this seems a reasonable policy to me.  Secondly, I wanted to see if, after all of that effort to get there, somebody might let me into the ballpark to

There was nobody from the Stars anywhere to be found.  (They should take a customer service lesson from the food bank people, who were all over the place.)  That’s strike two–they forgot to cover their field, and now they’re nowhere to be found.

The next morning, while on the road to Nashville, I called the Stars and talked to a staffer.  While she stated that they couldn’t offer a rebate, even to an out-of-stater, I was disappointed but not surprised.  She offered me an exchange for merchandise at their store, but I had already left the state.  Oh well.

What followed was breathtaking.

ME:  “Do you work with any charities that my wife and I can donate our tickets to?”

ME:  “You don’t work with any charities?”

ME:  “Not Big Brothers/Big Sisters?  Not the Boys’ and Girls’ Clubs?  Nobody?”

HER:  “Hold on…let me check.”  Long pause while she checks with co-workers.  She then returns.  “Sir?  We don’t work with any charities.”

Net result:  we decided to send the tickets to a Huntsville charity on our own.  And, as beautiful as I found the Huntsville area (gorgeous country there in northern Alabama), you can bet that I won’t go back for a Stars game.  When I return to officially cross Alabama off the list, I will do so in Birmingham, Montgomery, or Mobile.