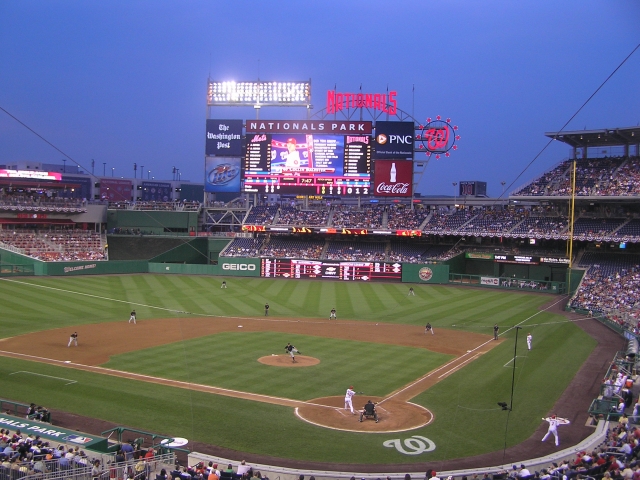 In 2008, I spent a quick 3 nights in DC heading to a game in the new ballpark so I could still say I’d been to all the major league parks.  I’m going to fall behind in 2009, as the 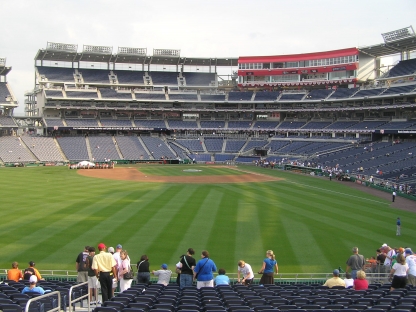 confluence of hard economic times, two new ballparks in expensive New York City, and a brand-new baby will prevent me from doing baseball travel.  I’ll catch up as soon as I can, of course, but Nationals Park will be my last new one for at least a year.  Much of this trip was a repeat of the RFK Stadium trip from a couple of years earlier:  games on consecutive days with kid sister Kathleen and college buddy Tom.  An enjoyable time was had by all…in a far superior ballpark.

I would imagine it’s only a matter of time before the elegance and simplicity of the name “Nationals Park” goes the way of the corporate-influenced dodo.  But whateve

r shall the new name be?  As the economy began its massive collapse in August of 2008–gas was $4 a gallon, and we were but a few weeks away from the 2008 Market Meltdown–my kid sister and I

considered the possibilities.  The best corporate names are so local that they blend in seamlessly with the local atmosphere (Coors Field and Tropicana Field, to name two).  What would we similarly associate with Washington DC?  Kath and I considered it, and thought about our government and its debt to foreign countries.  What if those countries agreed to forgive some of our debt in exchange for the naming rights to Nationals Park?  As much as I hate selling off stadium naming rights, I’d think it’d be worth it.  I therefore propose that Nationals Park, if it is to go coporate for its name, change its name to The People’s Republic of China Stadium.  Seriously.  Let’s consider that.  We could make a good dent in the debt that way.

Nationals Park has a lot of promise.  First of all, 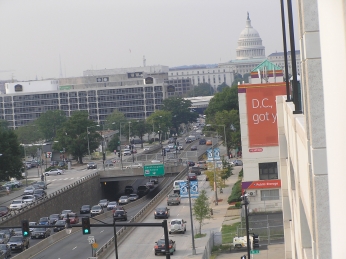 among ballparks I’ve been to, Nationals Park has the best shot at matching Fenway Park‘s inimitable “experience approaching the ballpark” category.  The exit from the Metro at Navy Yard station deposited me onto a road closed-for-traffic that leads a couple hundred yards to the ballpark.  As of 2008, there were one or two hawkers along the way, but once the Nationals get established, we can look forward to a walk through baseball sights, sounds, and smells that will be as good as anywhere.  I’m not one who believes a ballpark is the cure-all for a community, but I do believe that there will be a fun atmosphere along that walk one day soon.

was in an ordinary DC neighborhood.  Apartments were across one street, the Anacostia River another, and a sewage treatment plant a third.  However, one is never far from views of the Capitol and other DC landmarks, especially from the upper deck on the first-base side.  The place does well to reflect DC baseball history, particularly in the walk up to the ballpark–the Washington Senators and Homestead Greys are commemorated nicely.

Of course, once inside the ballpark, I noticed something I hadn’t considered before.  When I see the Space Needle, I think “Seattle.” When I see the Gateway Arch, I think “St. Louis.”  But when I see DC’s most important landmarks (the Capitol, the Lincoln Memorial, the Washington Monument, etc.), I don’t think “Washington.”

I think “America.”  My DC-native friend Tom disagrees…those landmarks represent home to him.  But to me…well, it feels like the local is trumping the national.  I don’t know that this is bad, but when your local landmarks are, in fact, representing an entire nation, is it appropriate to claim them as local?

On top of that, since so many people in DC are government workers who are not from (and do not claim to be from) the area, Washington is at a bit more of a home-team disadvantage than other teams.  For the Mets game, especially, there seemed to be far more fans of the visitors than of the home team, although some of this is a factor of the Nationals’ horrible ballclub at the time.

complicate the “is there any question where you are” test, but not by much, since Washington does the best with what it has…and sitting where one can see the US Capitol building is certainly a fine perk for the ballpark.

And make no mistake–this is a gorgeous ballpark.  Local flavor is evident in may surprising ways, from theDC-themed murals honoring past Washington Senators and other DC-area baseball heroes, to the linescore of Game 7 of the 1924 World Series behind a bar for their high-rollers (I asked to step in just for the picture, and the ushers reluctantly but kindly let me in for that purpose), to paintings of DC and other Hall-of-Famers throughout the concourse.  Nationals Park is a shrine to its city, its sport, and its nation, and it was a marvelous place to enjoy a ballgame.

In such lovely surroundings, the one slip-up sticks out a bit…the area set aside for Sony PlayStation

games that are not even baseball-related.  What the hell does Guitar Hero have to do with baseball or DC except to get a few bucks in sponsorship dough?  They even advertised an in-game  showdown…beat a Sony representative and win a prize.  Sorry…not relevant.  I could even forgive

such a move if it were a baseball-related game, but Guitar Hero looks like a concession to non-baseball-lovers, who I am confident wouldn’t make it out to the ballpark in the first place.

The Nationals continue to do the Presidents’ Race, as they did at RFK Stadium, but with a wrinkle that either didn’t exist or that I didn’t notice before.  They take advantage of the situation to make fun of Theodore Roosevelt, who had never won a race that season.  While Washington, Lincoln, and Jefferson run, Roosevelt gets lost on the streets of DC,

trips and falls, and generally makes a buffoon out of himself.  I’m not against slapstick comedy, but Roosevelt was a stud.  Couldn’t we add Fillmore, Buchanan, or Van Buren and make fun of him?

The first night featured oustanding seats (yay, StubHub) in the club section with my kid sister (yet another ballpark visited with her).  I knew I’d stumbled upon really expensive seats when I saw the cushions.

Do not underestimate the value of cushioning when you are a skinny, bony-butted man like I am. Then, the second night featured upper-level seats with Tom and his new iPhone.  He broadcast to the world that he was at the ballpark via photo.  At the time, I was trepidatious, but since then, I have since joined Tom in the Facebook world.  In fact, perhaps Tom

is reading this entry on the very same iPhone.  Hi, Spoon!

They’ve done very well with Nationals Park.  If ever DC gets a team worth a damn in there, this gorgeous ballpark will create fantastic atmosphere both in and around the stadium.  I enjoyed my trip this go-round, and look forward to many return trips with family and friends.
BASEBALL STUFF I’VE SEEN THERE:

Home runs by Carlos Delgado (who ALWAYS homers when I’m in the park…), Troy Tulowitzki, and Brad Hawpe lead to two Nationals losses.

It’s all recorded on the gorgeous scoreboard (which is followed by one more photo I couldn’t fit into the text above): 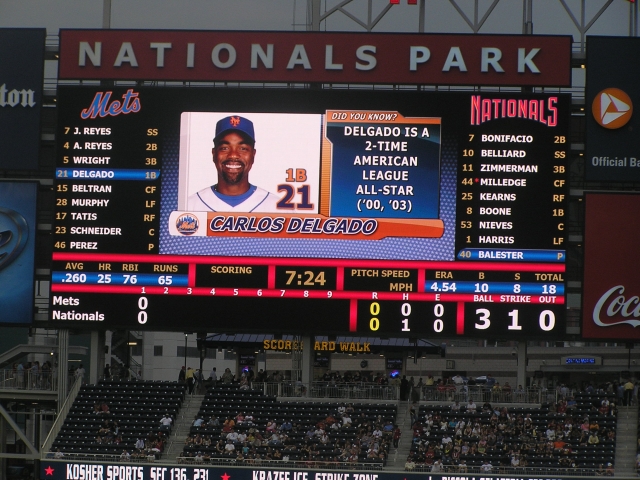 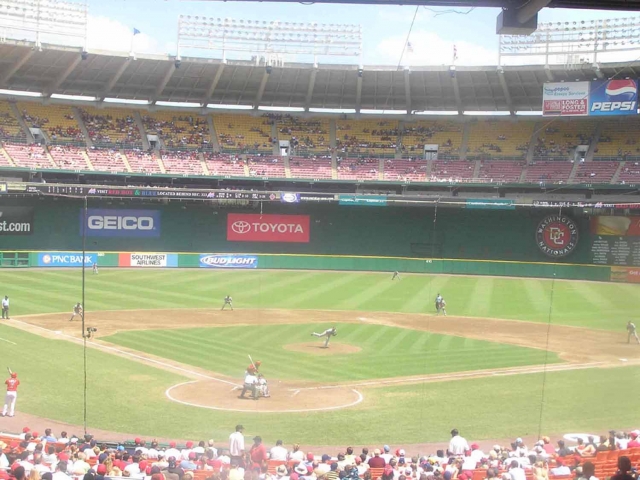