Man, does I ever love me a baseball museum, especially one that is local in scope and attached to a stadium.  I love 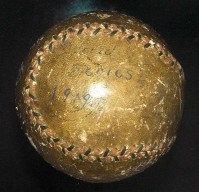 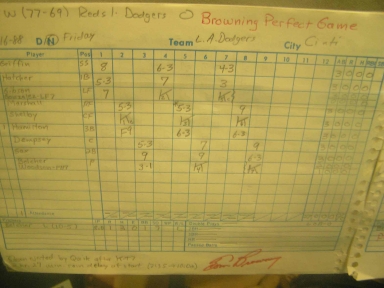 history, as one is able to do in Texas and in Atlanta.  If you’re like me, when you visit Great American Ball Park, you’re going to want to get there early.  The Reds museum is worth a couple of hours of your time.

I’m not really a Reds fan, but you can’t argue against their history.  Pro baseball began in Cincinnati, after all, in 1869–and the museum accounts for pretty much all of the key moments since then.  While I was there, the highlighted exhibit focused on the World Championship team of 1919…yeah, the other team in that World Series.  How much would it suck to win a championship and always be 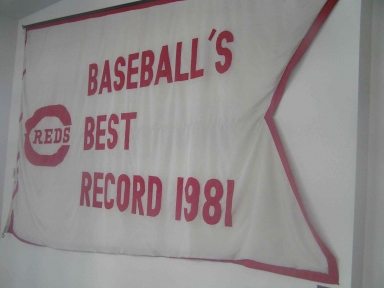 remembered for having the other team lose it?  I’d never really thought of that until seeing the story from the Reds’ perspective in the museum. Speaking of gamblers, the museum has a fine way of commemorating Pete Rose’s 4,256 hits:  they have 4,256 baseballs displayed against a wall…about 10-15 yards across and four stories high, behind a staircase and a glass wall.  Quite lovely.  Tributes to past ballparks, past teams, and the best moments in Reds history are there.  My favorite highlights are reproduced here:  a scorecard from Tom Browning’s perfect game, lots of statues, including this one of Sparky Anderson, 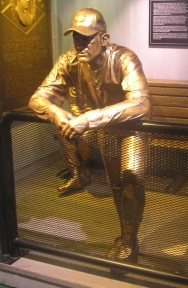 the pennant from the 1981 team which was denied the postseason during the strike-interrupted year, and the Reds Hall of Fame, where they honor pretty-good-but-not-really-great players from the team’s past.  Every team should have a place to honor its Mario Sotos.

The ballpark itself, I’m afraid, doesn’t live up to the experience of the museum. I do like its location right on the river and the fact that, unlike at Riverfront Stadium (on which GABP, for all its faults, is still an improvement), one can actually see the river from the upper deck. And the history I so enjoyed in the museum appears in the ballpark proper as well, 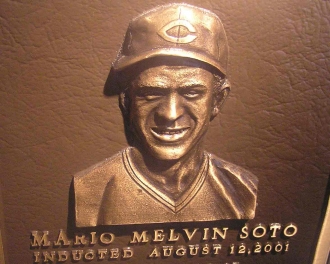 with sculptures, murals, and even a scoreboard feature of “past Reds to wear this number.”  (Ed Armbrister got a ballpark mention this way.)  But in the final analysis, there was just too much kitsch and too many stinking amenities.  The ballpark simply tries too hard.

I mean, the notion that the ballpark looks like a steamboat from the outside is sort of cute, I guess, but is entirely unnecessary.  Seriously:  isn’t a ballpark beautiful because it is a ballpark?  Why bother trying to make it impressive looking with this sort of extra effort?  It’s like too much makeup on a beautiful woman–it leaves 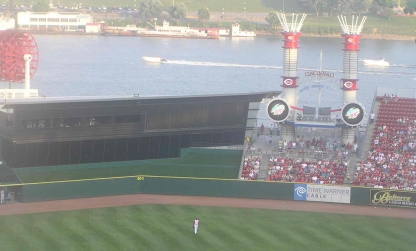 me wanting less. Also, from my seat, I looked down into a spot sponsored by a furniture store where the mucky-mucks could sit on cushy furniture and not watch the game.  I wanted to mark up that leather sofa with cotton candy.  I wouldn’t go so far as to say that the baseball is secondary at GABP: it certainly beats abominations like Detroit (with its amusement park rides) and Houston (with its damn stock quotes).  Still, I felt there was too much effort to distract.  All the distraction I need is in the river, with the barges and speedboats passing by.  I didn’t need more.  Even what the ballpark did well–like have lineups displayed on the concourse, minor-league style–had flaws (like the misspelling of Wilson Betemit’s name). 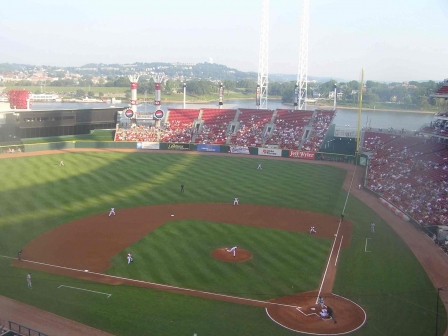 Longtime friends and fantasy baseball rivals Joe and Alison joined me for the game.  The live in rural Central Ohio…about a 3-hour haul from

Cincinnati.  Alison is a lifelong Tribe fan; Joe is partial to the Nationals.  But both did me the honor of joining me for this one, and even headed across to PNC Park the next night.  Add to that the playoff ballgame in Cleveland in ’01, and you have among the league leaders in Seeing Major League Ballparks With Paul.  (First place is still my dad, but my wife is catching up fast!)  Needless to say, a fine time was had by all of us.  We headed up high into the upper deck…the better to have silly conversations without worrying about being overheard.  The topics of those silly conversations?  Well, they’re lost to 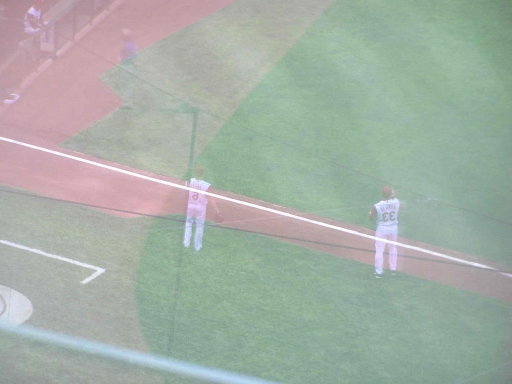 history–I seem to remember trying to figure out what industries still use barges along the Ohio–but I do know I’m grateful to have friends that are willing and able to decimate a week driving all over Ohio to hang at ballgames with me, and also willing to lug me back to their place for lodging.  Appreciated as always, folks.  I’d love to return the favor for you and your family whenever you get to the West Coast.

So, in the end, the ballpark is somewhere in the middle–or a hair below it–when compared with its contemporaries.  Nonetheless, the quality hardly mattered to me.  The museum was fantastic, and the friends even better.

The Dodgers win a key wildcard matchup.  Wilson Betemit channels his obvious anger at his misspelled name into a 2-run homer, and Rafael Furcal knocks in four runs.

Adam Dunn and David Ross homer for the Reds.

In the first game after the 2006 trade deadline, I see Julio Lugo make his debut for the Dodgers, and Rheal Cormier and Kyle Lohse for the Reds. 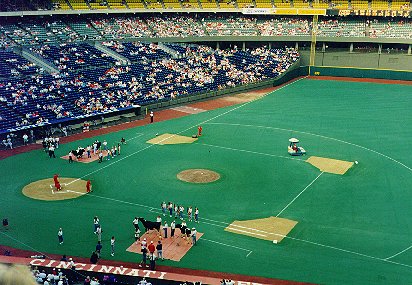 Riverfront Stadium was imploded on December 29, 2002.

First the stadium:  see Busch, Three Rivers, the Vet.  A circle.  Turf.  Boring.  There.  That’s all I have to say about the stadium.

I was in the front row at Riverfront for a good game against the Cubs.  I was down the right field line.  You know that point where the seats jut out, where doubles down the line hit and sometimes ricochet back towards the infield, or suddenly turn left and zip in front of the right fielder, forcing him to change direction, making a double into a triple?  I was right at that point.  First thing I did was called my folks in Colorado and asked them to tape the game on WGN so that there would be hard evidence of (a) my presence at the game and of (b) any foul balls I would be able to grab.  As it turns out, (b) didn’t happen.  I came close (about 5 feet away) on a Rick Wilkins smash foul in the 9th inning.  I forced my poor family to watch the foul ball repeatedly, repeatedly seeing me reach out from my seat to miss the ball by, well, a lot.  But I made the effort, and I was on TV trying.

This will go down in my memory as the Larry Luebbers game.  Larry Luebbers was making his third major league start, and his first start at home in Cinicnnati, where he grew up.  I was sitting with every friend, relative, and neighbor of Larry’s (they all called him “Chip”) from Cincinnati, except for Larry’s dad, who had a different (and, I assume, better) seat.  I habitually root for the home team at every game that doesn’t involve my Mariners, and at this game, it was more intense than usual.  My seat was very near the Reds’ bullpen, and I was just a few feet away from Larry as he paced before warm-ups.  I remember thinking he looked nervous and was trying to cover it with a look of intense concentration…and failing.  Well, still, he had won his first two starts on the road, so I figured he had something going.

I cheered for Chip with his friends and family.  Some of them might have even figured I grew up in the area…I was Chip’s high school buddy or some neighbor they didn’t recognize who’d faced Chip in Little League.  Alas, a Chip Luebbers victory was not to be…I think Chip’s nerves got to him a little bit.  He gave up five runs and walked 6 in less than 5 innings.  One of the Luebbers’ neighbors went away for a couple of innings to find Larry’s dad and congratulate him for his son’s making the majors.  “I told him that no matter what happens from here, Larry’s made it way further than anybody else.”  Very true, but probably very unsatisfying for Larry that night.

Now that I think about it, I may have been the turning point for Larry’s career–for the worse.  He was 2-0 before I sat with his family and friends–and he finished the season 2-5.  He then went back to the minors, and I lost track of him and figured he was finished.  Not so…six years later, in 1999, he was back in the majors with the Cardinals, for whom he went 3-3.  He returned to the Reds as a reliever in 2000, but I could not find him on a major league roster as of July 2001.  Isn’t that admirable?  To get a taste of the majors, then toil for six more years to make it back up again?  Way to go, Larry.  Sorry I couldn’t see you win in front of your buddies.

This game also was my first of two consecutive opportunities to root for Kevin Wickander.  Wickander started 1993 with the Indians, when his good friends, Indians pitchers Steve Olin and Tim Crews, were killed in a boating accident that March in Cleveland’s spring training.  He was devastated, and suddenly couldn’t pitch.  Mike Hargrove and the Indians’ brass thought that Wickander needed a change of scenery…you can’t pitch while everyone and everything you see reminds you of the death of your good friends.  So they traded him to Cincinnati for future considerations…this, entirely a mental-health move on Wickander’s behalf.  Just a little while before seeing him pitch, I had read a touching Sports Illustrated article about the tragedy and the Indians’ (and particularly Wickander’s) recovery from it…and then, that night, there he was, warming up a few feet away from me.  He ran out to the pitchers’ mound, and I shouted as loud as I could…”All right, WICK!  Go get ’em, WICK!”  Here’s a guy who needs something good to happen to him.  The subtext behind his appearance…well, it made it one of those moments that transcends baseball, at least to me.  Ryne Sandberg was on second after a leadoff double, and Wickander was to face the lefties that followed in the Cubs’ lineup.  He threw 8 pitches.  All 8 were balls, and one was a wild pitch. He wouldn’t do much better a week later in the Astrodome.

It was one of the most poignant and tragic things I’ve ever seen.  It was like watching somebody at work trying to do his/her job after a personal tragedy, doing a terrible job, but with nobody having the guts–yet–to say that he/she probably should take some time off.  Except this guy was going through it in front of 31,587 people.  Fortunately, nobody scored that inning, but Wickander didn’t throw a single strike.

Possibly more than any game I’ve ever been to, this one demonstrated that the guys out there are, in fact, human beings, like Chip and Wick–blessed with friends and families and facing their own demons just like the rest of us.

The Reds almost pull off a comeback win, cutting an early deficit to 5-4 with nobody out in the 6th and a man on second.  Then Reggie Sanders hits a fly ball to right-center, where Sammy Sosa, playing center, waves off rookie Kevin Roberson.  He guns down Hal Morris trying to tag up to third, and the Reds never recover.

Larry Luebbers is tagged with his first major league loss.