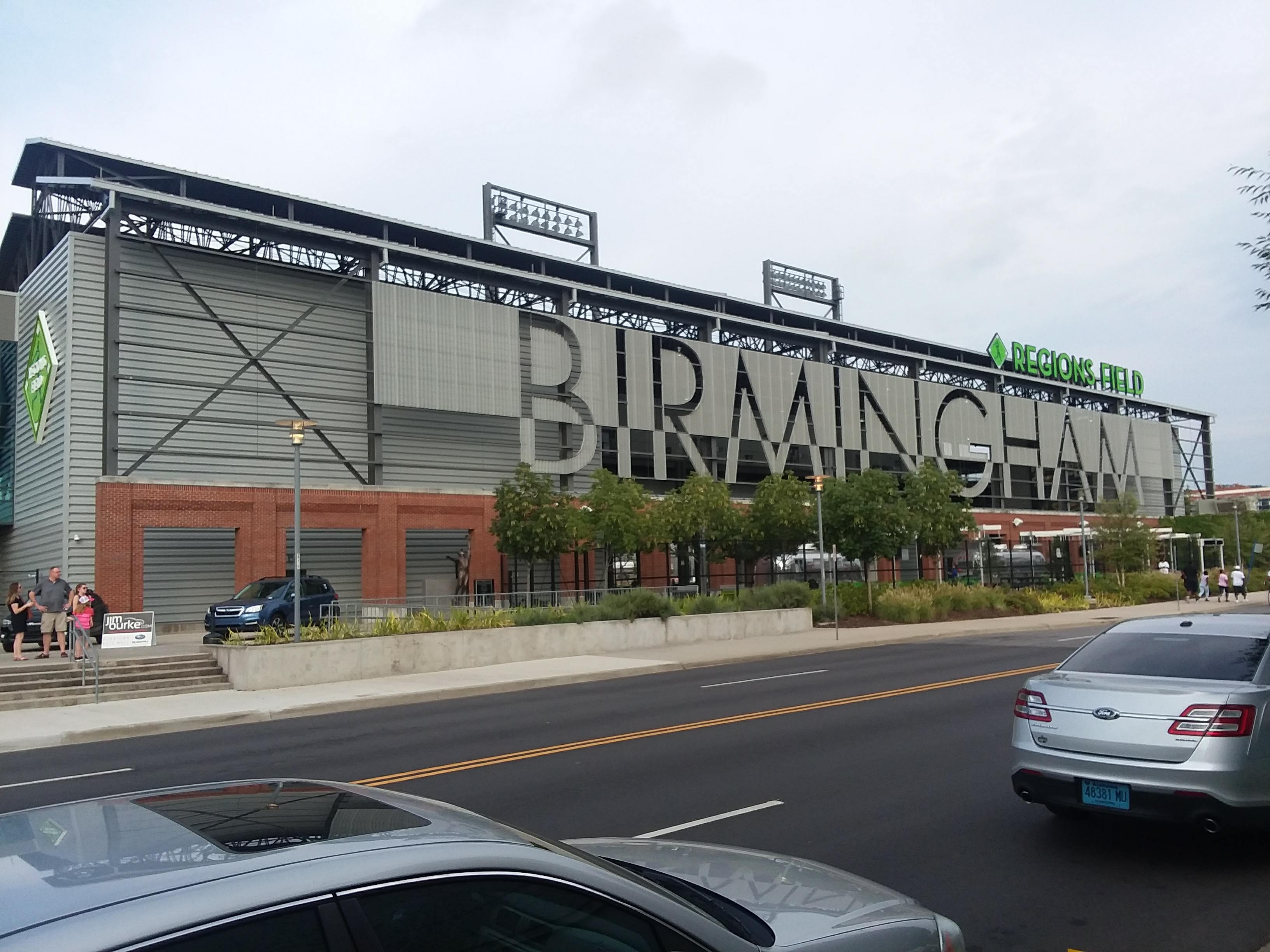 As I have said before, Double-A baseball is my favorite league to watch besides the majors. These are the players that the 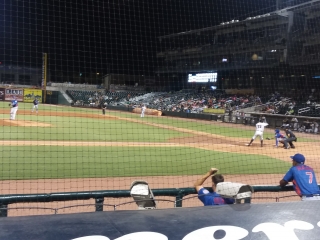 team takes seriously for the future. They tend to be younger than triple-A players, who are mostly just spare parts for the major leaguers.  You still might see a mistake or two, but on the whole, this is where things start to get exciting in the narrative of a ballplayer making his way to the top.

And on a night like this, with a pair of friends and a pitchers’ duel, well, things are delightful.

The ballpark itself is in a sort-of no-man’s-land as far as location: it’s not exactly a downtown ballpark, but just a little away from it. It allows for some pretty decent views of downtown from the right-field foul pole, but the view is nondescript 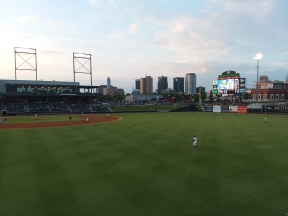 overall. The architecture is unlike that of most ballparks I have known. From the outside, it’d be hard to tell if the building was a ballpark or a convention center of some sort: it’s just a big box with the word “Birmingham” on it. So I feel like this should score a little low on the “is there any question where you are” test.

But then again…I’m afraid I missed the Southern Negro League Museum, just a block away. I don’t regret missing that, since

we spent our day in Montgomery, which was astonishing. (If you are within a day’s drive of Montgomery, ever, go to the National Memorial for Peace and Justice, known in shorthand as the “lynching memorial.” It was one of the most searing and impactful experiences of my life.)  But I do wish I’d known it was there. Learning about the Birmingham Black Barons before watching the Birmingham Barons would have been a good doubleheader.

On the inside, the place felt a little bit worn. There was a little bit of trash around, and more closed concession stands than I felt like the (decent) crowd merited. I did chat with a few college-aged folks about their experience working

there, and they seemed nice enough, but I felt like there were some holes in this evening.

There were some nice spots. I liked the train car that was a part of the decor: as I recall, it was a spot where there was a party of some sort. The railroad is a critical part of the history of the South, and also of the integration of baseball: I’ve heard stories of African-American porters serving ballteams with the earliest Black players on them with particular joy and attention. So that was a cool step.

I wonder if anyone else was a little weirded out by the fact that the largest picture of a past Baron was…Michael Jordan.  I can’t remember any of the others, in fact.  We’ve got Willie Mays, Satchel Paige, Rollie Fingers, Burleigh Grimes, Reggie Jackson, and Frank Thomas who were either Barons or Black Barons, and Jordan is towering over all of them. Jordan’s 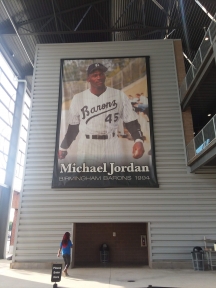 year in minor league baseball is a fascinating story (loved the ESPN documentary on it, Jordan Rides the Bus), but it’s a bit of a curiosity, and I’m not sure it merited such a disproportionate bit of real estate, given the Hall of Famers who could have been there.

That said, it’s the game I will remember from this night. There’s nothing like a rapid pitchers’ duel–this one clocked in at just over two hours–where any baserunner could be the most important baserunner. Don’t get me wrong: I like baseball, and don’t have an issue with a long game. But when I’m hanging with friends, there’s also room for a short one, crisply played, with a beginning, middle, and an end in the books in time for us to get in a ton of word games at the hotel.

So a park that didn’t grab me, but a fine night nonetheless.

REGIONAL FEEL:  6/10.  Mixed. I’ll give them the benefit of the doubt for the adjacent museum.

SPECTACLE: 4/5.  I remember a quiet night. Yes, there were some dancing and singing workers who I enjoyed talking to, but it was quiet–which I like for double-A ball.

Can’t argue with a name that has endured for a century. Babe Ruff (pictured with me here) is a fine pun, but not locally appropriate as a name. A Google search tells me that Babe did play in Birmingham on some exhibitions, but I don’t know that I’d say that’s enough of a connection.  Maybe Willie Bays would have been better?

AESTHETICS: 2/5.  Didn’t find this place attractive from the outside. Didn’t do much for me on the inside, either.

PAVILION AREA:  3/5.  Some highlights here, including the nice view of downtown.

Easy game to score. Didn’t notice any issues as I went.

BASEBALL STUFF I’VE SEEN HERE:  Birmingham’s Kodi Madeiros lasts eight innigns, giving up only five hits and a run through 8 innings. Duncan Robinson and three relievers combine for a three-hitter, however, striking out nine. Tennessee pushes across an unearned run in the ninth on a two-base error and what runed out to be the game-winning single by catcher P.J. Higgins.

Birmingham’s Luis Basabe is the only player with a multi-hit game, going two-for-two. He also reached on a walk and was hit by a pitch, stole a base, and scored the Barons’ only run.

Allen Webster nails down the save. 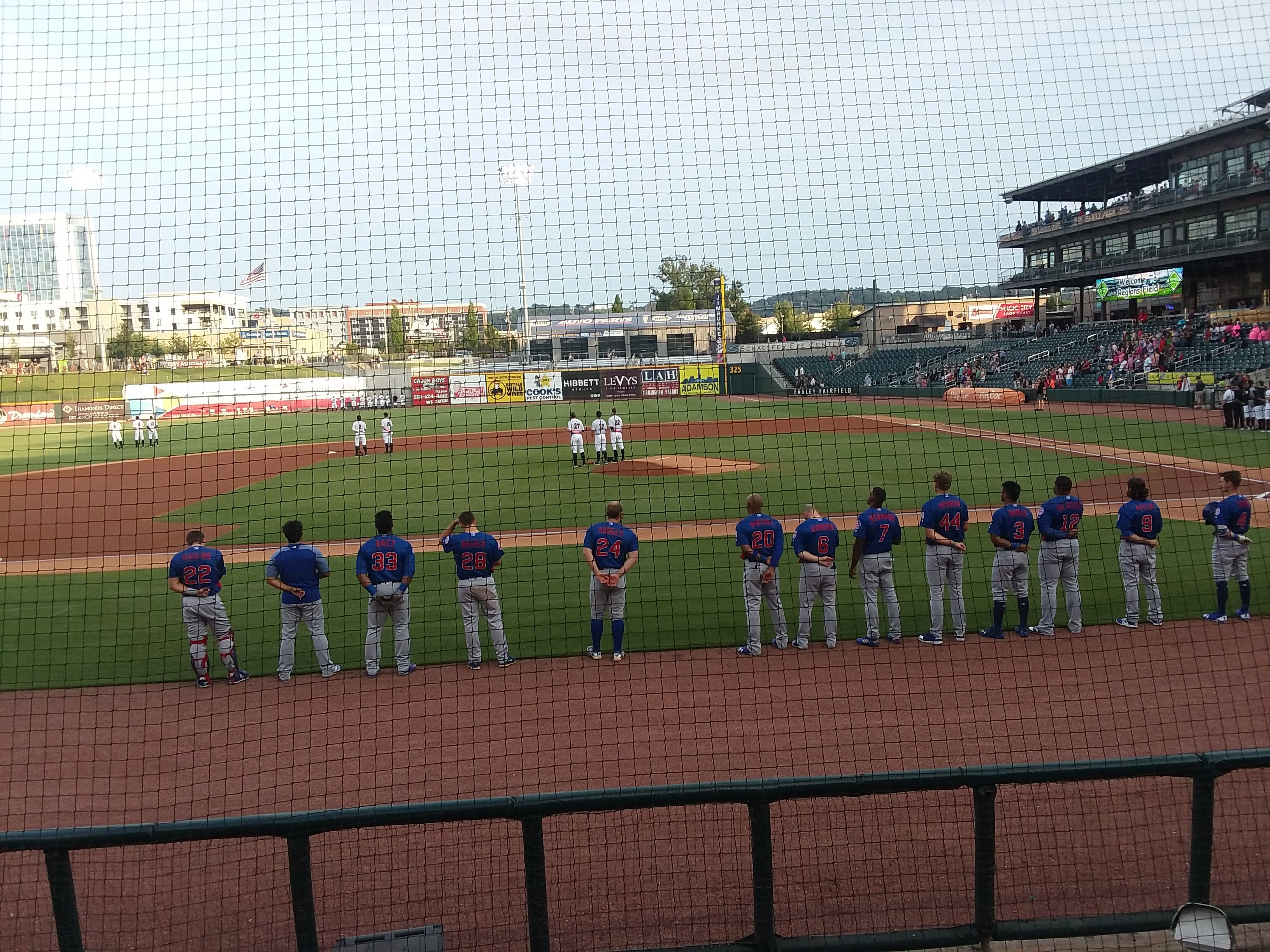