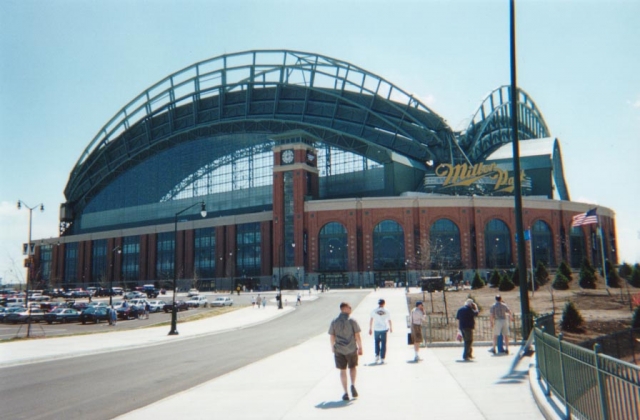 (Click on any image to see it in a larger size.)

When I compare stadiums with retractable roofs, there’s no question that I’ve developed a preference (if there is to be a retractable roof…I still find it highly unnecessary).  The canopy-style roof at Safeco is far preferable to me.  That way spectators can still sit in the open air and see out of the ballpark.  However, I suppose that Seattle’s temperate climate lends itself to a canopy roof better than Milwaukee and Toronto’s cold spring/falls and Arizona and Houston’s oppressively hot summers.  But Milwaukee has a decent compromise.  Although it is entirely enclosed like Bank One Ballpark, at least Miller Park puts windows past its outfield bleachers so one can look out at Wisconsin’s weather.  There are no ads on those windows, so the eye has a place to go where it’s not assaulted by advertising.  Plus, during this particular April, I could look out at a 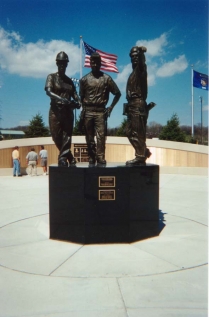 Not that I had to.  They brought the thunderstorm in to us.  The morning of my second game at Miller, the Milwaukee Journal-Sentinel featured a headline that there were structural defects in Miller Park’s roof.  Miller Park has been problematic from the start, as you’ll recall, most tragically because of the deaths of three workers during the construction of its roof.  (There’s a sculpture of three workers out in front of the building that’s a very sad and poignant reminder of the accident.  The plaque reads “TEAMWORK” and lists the three men’s names.)  And I got a first-hand look at Miller Park’s problems before my second game.  There was a rough Midwestern April thunderstorm, and the allegedly closed retractable roof…didn’t.  It leaked.  And I’m not talking about drip-drip, either.   I’m talking about an Angel Falls-style deluge through one of the cracks, bouncing off of the clock in right-center field and spraying all over two sections of seats.  It was incredible. 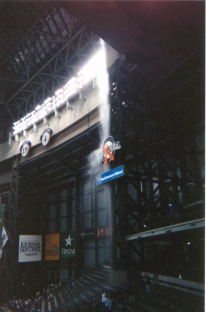 The ushers’ solution:  allow those with seats in those two sections to sit anywhere they wanted.

This wasn’t a problem because I went to Miller Park at a nadir in Brewers’ history.  The 3-12 club was incredibly awful, and they fired Davey Lopes between the two games I watched.  A losing team, a fired manager, a broken stadium built at taxpayer expense, and even a bench-clearing brawl…it was not a happy time, and these were not happy fans, nor were they numerous.

But the ballpark still wins points for all kinds of cool things.  First off, 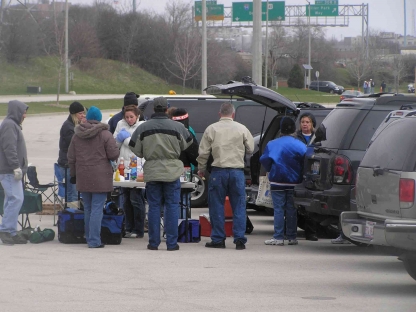 Perhaps most importantly, though, in spite of its corporate feel, the park still passes the “is there any question where you are” test, as the charming-but-outdated County Stadium did.  To wit:  the immense amount of room set aside in the parking lot for tailgaters, who were numerous even in a thunderstorm before their 3-12 team played.  There was even this nun wearing a Brewers cap over her habit: 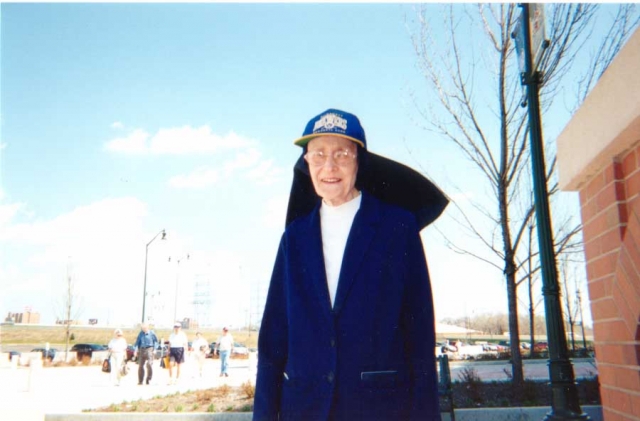 Plus, it wins points for the Polish feel throughout.  We have the sausage race between the bratwurst, Italian sausage, Polish sausage, and hot dog.  They dash from the left field corner around home plate to the finish line just past first base.  It’s vaguely disturbing to see these giant weenies run, I think, and strange how passionate people get about the race (I’m certain money changed hands).  The Italian sausage had a stereotypical Italian handlebar mustache.  The bratwurst wore traditional German lederhosen.  The hot dog had giant white American teeth, and, if I recall, sunglasses.  What stereotypes did they use for the Polish sausage?  Well, none.  They didn’t want to go there.  (Perhaps they could have had him run the wrong way?)  For the record…Polish won the first game, hot dog the second.

So, all in all, a fine ballpark, although a depressing experience in some ways.  The taxpayers had paid a bazillion dollars and three people had lost their lives to build a ballpark to generate revenue to create a competitive team in the Bud Selig/Donald Fehr Economic World.  The result?  At least in 2002, it was a God-awful team, an impending strike, and a half-empty stadium that didn’t even work as designed, leaving a good number of people wet. Nonetheless, a thumbs-up.

APRIL 2007: I got to enjoy a full Miller Park!  The bad news is that most of the fans were Cubs fans.  Rather than the spirit-war atmosphere I’ve received in similar games, this felt like drunken impending danger.  We sat next in literally 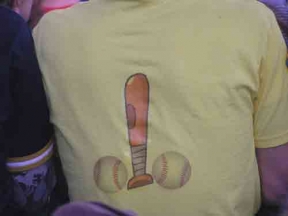 the top row of the entire ballpark next to an already-toasted Brewer fan who seemed to want to get into it (just verbally…I think) with the many, many Cubs fans surrounding us.  He didn’t know what to make of me (Mariner hat) and my wife (Cardinal hat).  When I responded with an “Ooo!” to a great Cubs hit, he sort of threateningly said to me:  “I thought you said you weren’t rooting today!”  Thankfully, he left at the end of the third inning…probably to get more bratwurst.

It may have been the drunkest game I’ve ever experienced.  Everyone appeared toasted–and most of them had to drive back home to Chicago.  Scary thought, that.  The men’s room featured ridiculous waits, shouting frat-boy]style louts, and a possibility of a West-Side-Story rumble between Cubs fans and Brewers fans.

Nevertheless, I did enjoy seeing a new era in Miller Park history.  Some smart people (including me) have predicted the Brewers to win their division in 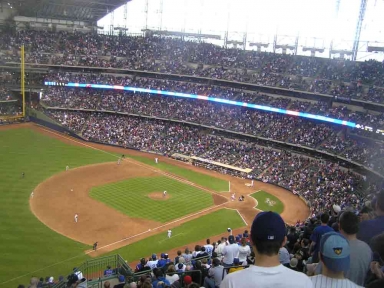 My first bench-clearing brawl!  It all started when the Pirates’ David Williams hit the Brewers’ Geoff Jenkins in the second inning.  Jenkins walked very, very slowly to first base, jawing at Williams.  When the Brewers’ Ben Sheets plunked the Bucs’ Aramis Ramirez on the butt the next inning, it all got started.  Highlights included Ramirez chucking his helmet–hard–at Sheets as he approached, and Sheets responding with his glove (ouch!  that malleable leather must hurt just as bad as the hard helmet does!).  Then there was a giant pile, and Ramirez sprained his ankle.  As brawls go, this one was good, although I would have liked to have seen them resolve their differences in a non-violent manner instead.  Ramirez could have written his grievances on a paper and handed it to the catcher for delivery to Sheets.  (Ramirez was eventually suspended for 7 games, and he served the suspension while injured.)

Davey Lopes’ last game as Brewer manager, the 3-2 loss to Pittsburgh with the brawl.

Richie Sexson has all 7 Brewer RBI in the 7-5 win, with two home runs and a triple.  The NL record for most RBI that account for all of a team’s RBI in a game is 8, so that’s a heck of a game.

The Cardinals’ Darryl Kile gives up four runs in six innings and gets a no-decision about two months before his sudden and tragic death.

Carlos Zambrano shuts down the Brewers, in spite of a monstrous Geoff Jenkins home run.  Aramis Ramirez goes deep for Chicago, and Ryan Dempster picks up the save. 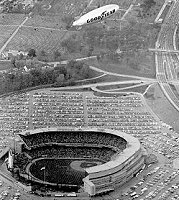 From the -Milwaukee Journal Sentinel-.

County Stadium was destroyed in 2001.

With the opening of Miller Park, Milwaukee may finally feel like it has made the big leagues, stadium-wise.  County Stadium’s small-town, not-quite-big-league feel was the source of its charm, however, and I can’t help but feel that something has been lost.

I attended the game with engaged friends Chris and Rebecca.  Rebecca is very Wisconsin, right down to the weird pronunciation of short “a” (as in “class”; those of you who know folks from between Chicago and Green Bay know exactly the sound I’m talking about).  Both are baseball fans–Rebecca talked about joining Safety Patrol during her childhood in Wauwatosa just so she could get the free Brewer tickets that were the major perk of the job, and Chris ably manned the scorebook duties when I went for a walk around the park.  We sat underneath the overhang, a little bit behind first base, to watch a bad Brewer team get beat in a close game.

Rebecca showed a little alarm at the kinds of things I would yell…back in my youth, when I was with friends, I sometimes would yell things at my least favorite ballplayers (anybody who doesn’t hustle or any power hitter hitting under .200, like, in this game, Tom Brunansky).  “I HAVE VERY LITTLE FAITH IN YOU,” I shouted when Bruno came to bat with the bases loaded…Texas had walked Greg Vaughn to get to him, and wouldn’t you too?  In the years since, I have decided that the price of admission does not give me license to verbally abuse people.  Even a .179-hitting cleanup hitter.  They’re people too.  Rebecca would give me a shocked look when I shouted, then laugh in spite of herself.

But then, I’ve spent most of my life saying inappropriate things to Rebecca.  It’s a nice arrangement:  I say something astonishingly inappropriate to Rebecca, and in exchange, Rebecca laughs very hard for a long, long time, often punctuating it with “Oh, man!”  I swear she’ll laugh at things I say that, if somebody else were saying them, she’d make a citizens’ arrest on them.  That, and Chris’s bemused looks at our behavior, form the basis for a pair of incredibly valued 10-year friendships.

I missed an inning to look for a guy who I think was named Wayne or Ray Zumwalt.  I was feeling all smug about what a stud I was for going to 11 ballparks that summer, when Wayne or Ray, who clearly has a whole lot of money, a month off, and a personal assistant, decided to go to all 30 ballparks…in thirty days.  We crossed paths in Milwaukee.  I know because they put his name on the scoreboard…but when I went out to look for him (asking ushers, mostly), I had no success.  Ray or Wayne…way to go.  If I ever find I have more money than I know what to do with, or if I can find a sponsor, and an understanding date to get on all those planes with me, I may follow in your footsteps.

Tom Brunansky pops out to short with two out and the bases loaded.

No Brewer home runs, so I didn’t get to see Bernie Brewer slide into the suds.