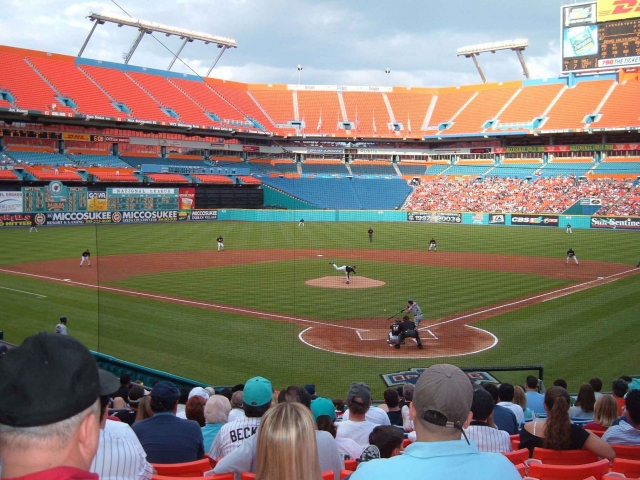 The Marlins left this ballpark in 2012.

I had never been to Florida when I traveled there over my spring break in 2005 to take care of the Southeastern United States’ major league baseball stadiums. 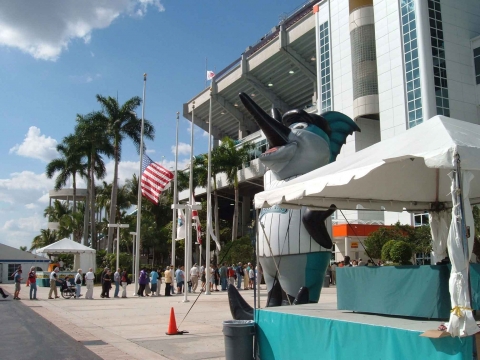 This might serve as a surprise for many of you for whom Florida is a regular vacation destination, but I in fact made it to 45 states before I made it to Florida.    I had heard negative things about Miami as a tourist destination, and therefore had low expectations once I disembarked from the red-eye, lathered my pasty Seattle skin with suntan lotion, and headed out for my one-day-to-see-Miami adventure.  I had a fun day puttering around the town before fighting through God-awful traffic to get to an early-evening start at the too-distant-from-the-city-center ballpark.  All in all, the ballpark was subpar, but the wonderful fans of Miami made the night memorable.

Let’s start with the name, which gives away the main problem with the stadium.  Its original name, Joe Robbie Stadium, came from the Dolphins’ owner.  Its second name, Pro Player Stadium (which, as of the start of the 2005 season, still graced a few forgotten signs both inside and outside the stadium), was a fairly typical dull corporate name, 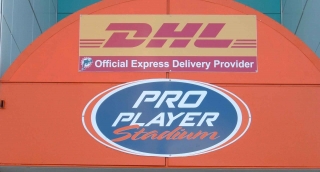 but when that name was gone, it reverted to Dolphins Stadium.  The name says it all:  it is a football stadium, sitting on Dan Marino Drive.  Indeed, calling this a “multipurpose stadium” is a bit kind, as baseball is quite clearly an afterthought at this ballpark.  This leads to a few problems with atmosphere that are insurmountable.  Most importantly, there’s no place in the seats where one can see outside of the ballpark.  I even went up to the top row of the top deck (quite a trip) to see what kind of views it offered.  Once there, I discovered that the wall behind the back row was about nine feet tall and could not be seen over.  And since the stadium is the same height all the way around, there’s an enclosed feeling that doesn’t work for baseball.  It’d be great for football, I’m sure…I bet that 70,000 Dolphins fans can make a lot of noise there.  But it’s terrible for baseball, where I like my eyes to be able to wander outside the ballpark during quiet times.  Additionally, the place feels empty even when it isn’t.  About 30,000 people were at the game I attended–not bad for the first Saturday of the season.  But in a football stadium, that feels desolate.  The seats’ annoying orange color doesn’t help, either.  It’s just not a very nice atmosphere.

One of the things I was most looking forward to at the ballpark was seeing the salsa dancing.

I happened to see a special on cable TV listing the top ten ballpark foods.  There, I learned that the Marlins have a salsa band play before Saturday night games.  Sure enough, when I got there, there was a salsa band playing.  Sort of.  By playing, I mean “mailing it in.”  For starters, although the band featured a singer, a guitar player, and a drummer, most of their noise came from a boom box which appeared to be playing karaoke versions of their salsa favorites.  Secondly, when I arrived at the ballpark, I found the drummer actually talking on a cell phone while he played.  This has to be the worst possible thing a performer can do.  Was he working on a 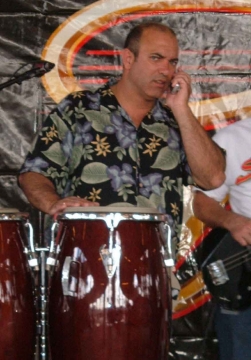 real estate transaction?  Was he missing beats with his left hand while he played with his right?  Combine that with the yucky concrete concourse where they played, which was bad for both acoustics and atmosphere, and there wasn’t any reason to hang around and listen to them…and few people did.

One more complaint–in spite of the smallish crowd, the concession lines at Dolphins Stadium were the longest I’ve ever experienced.  I got in line a half hour before the game began, and barely made it back for first pitch.  The service was slow, but the folks made up for it by being rude.  You might not want to head to the concourse to eat, at least not on the lower level.

In spite of all of these negatives, I still had a marvelous time at Dolphins Stadium, in good part due to the wonderful fans around me. 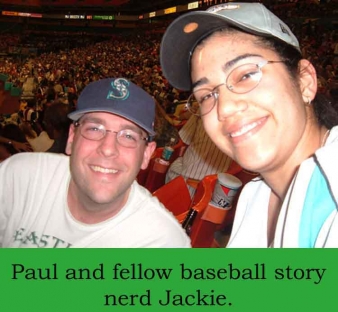 I met a kindred spirit seated behind me.  Jackie is about 17 years old–a senior in high school–but appeared to watch the game in the same spirit as I do.  She had a stat or an anecdote for every batter who came to the plate, not only for her beloved Marlins, but even for the Nationals.  And she had a photographic memory for the details of the game.  To be honest, I really felt like I was listening to a version of myself from 20-some years earlier.  Baseball wasn’t my sport yet–it was basketball.  I could feel myself sitting in McNichols Sports Arena, telling my dad and anyone else would would listen minutiae about Dan Issel, Alex English, Mike Evans, and any Nuggets opponents whose Statis Pro Basketball cards I remembered.  It was really wonderful to listen to her riffs.  She’d chug along in perfect English until she came to a word where Spanish would be a better match for her thoughts, at which point she’d seamlessly throw in the Spanish word.  I eavesdropped for six innings before I finally told her family how fun it was to listen to her.

Jackie’s eidetic skill was most apparent in the following exchange she had with her dad after a screaming foul ball landed not far from us:

JACKIE’S DAD:  “Remember that game we came to last year, where they guy near us got hit in the head by a foul ball?”
JACKIE:  “Yes.  That was when we saw the Braves on April 24th last year.  A Saturday game.  Brad Penny got the win, and Conine had his first homer of the year.  The foul was off of Cabrera’s bat.”

Guess what?  Every detail of that was accurate.  I checked it out. 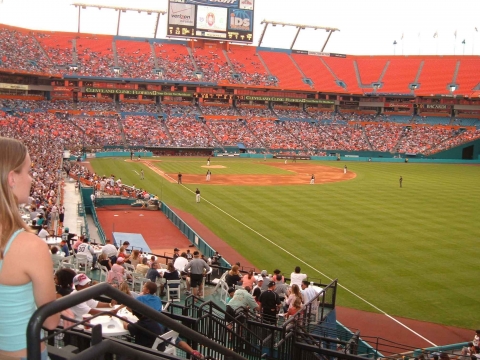 Now that’s a fan after my own heart.  Someone asked Jackie how she knew so much about the game.  Her answer could apply to anyone who’s knowledgeable about any topic, from history to calculus to baseball to musical theater to motorcycles:  “Baseball is interesting.  I just watch, listen, and read a lot.”  Charming kid.

I also had a bizarre small-world moment after meeting a Floridian next to me.  He casually mentioned that his son played Division III baseball.  I don’t know what Division III schools are in the Southeast, so I asked where his son went to school.  His answer:  “A school called Kenyon in Gambier, Ohio.”  What a bizarre moment!  I went to Kenyon, and only missed his son by a couple of years.  The odds against that were astonishing…I’m from Seattle, so Dolphins’ Stadium is 4,000 miles away from home and 1,500 miles away from Kenyon.

As the game wore on, I grew to like these people around me, and once they started talking to me (because they figured out that I was trying to get to all of the ballparks), we got to be buds, and I started rooting for the Marlins, even though I don’t have any emotional attachment to them 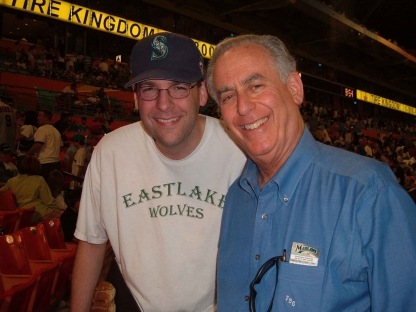 at all.  It came down to the bottom of the ninth inning.  When Carlos Delgado came up with the Marlins down by one, I said to the Kenyon father:  “You know, Carlos Delgado leads the league in the very esoteric statistic of Most Home Runs in Paul’s Presence By A Non-Rockie or Mariner.”  Not surprisingly, the guy looked at me with a confused expression, but broke out of it in time to say “Well, that’s good news.  We could use the help.”  Next pitch:  Carlos hits it out.  His first homer as a Marlin.  I take full credit for that!  I high-fived all my new friends.

Points for the organist at Dolphins Stadium, for playing snippets from tangentially-appropriate songs as every Nationals’ player approached the plate–snippets that were only appropriate with some thought.  For example: 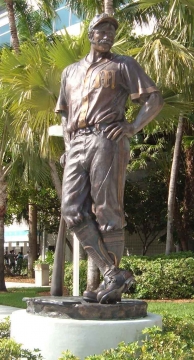 The organist would play bits buried in the verses of the songs, too, so that I had to think ahead to future lyrics to get the jokes.  Fun stuff.

Special thanks to the Dolphins Stadium usher who saved my bacon.  I had lost my rental car key…it had fallen out of my pocket when I took my camera out to take pictures of the postgame fireworks display (always a silly idea, yet one I keep trying when I’m at a game with fireworks).  It had fallen out of my shorts pocket.  When you’re carrying a big wallet, cellphone, tickets, camera, and more in your pockets, it’s easy to lose keys when taking things in and out of them.  I was trying to figure out how I’d make the game at Tropicana Field the next afternoon, and my new friends were desperately looking for a single car key, when an usher found the key for me–and, incredibly, refused my grateful tip.  I only wish guys like him worked the concession stands.

So while I believe that there are a lot of negative aspects to Dolphins Stadium–namely, that it’s the Dolphins’ Stadium first and foremost, and that baseball isn’t meant to be there–I still had a tremendous time there with the residents of South Florida.  I continue to be impressed with how nice people are when I travel, and on this swing through Florida, Georgia, and North Carolina, the fine folks of Miami were the nicest I encountered.  Great baseball fans, all of them.  Although things don’t look good for them as I write this in May of 2005, I hope something comes through for them and that they get a stadium they deserve someday soon.

A tremendous ballgame.  Ryan Church and Vinny Castilla homer back-to-back to give Washington a 5th-inning lead, but the Marlins tie it up with Delgado’s 9th-inning homer.  Two batters later, Paul LoDuca pounds one to left field that I am convinced ends the game…I start high-fiving people again…but it turns out that, rather than a home run, it’s a single that hit six inches from the top of the tall left-field scoreboard.  The game goes to extra innings, and the Nats win it on Jose Guillen’s homer in the 10th.