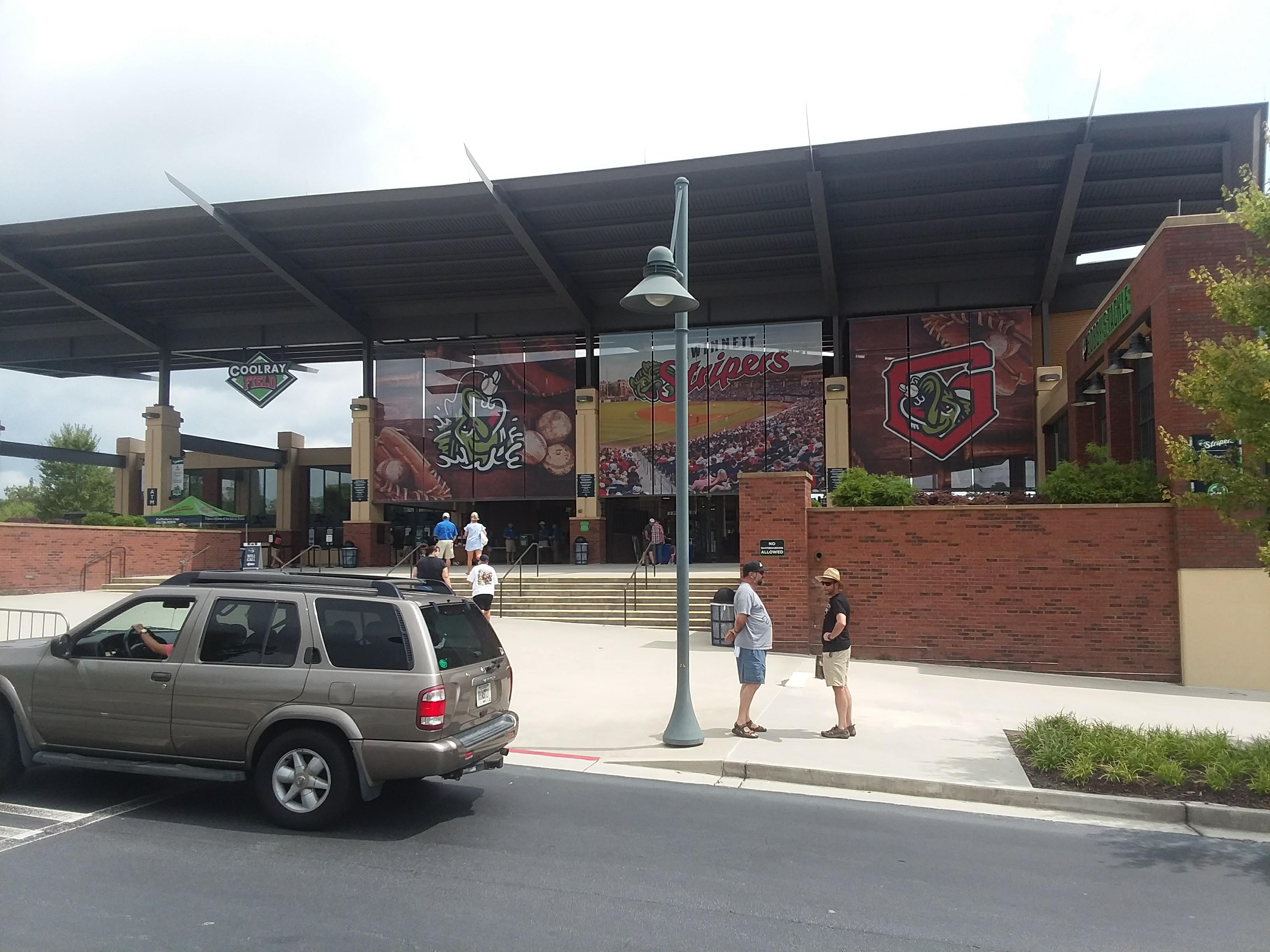 I splurged for our game at Coolray Field, getting the box seats immediately behind home plate that included free food before the game. Turned out to be a really good idea, too, since it was, I believe, about a bazillion degrees with ten thousand percent

humidity that afternoon. (81 degrees and overcast, the box score says).  Hot dogs and chips and water: it was a fine pre-game meal that meant we could stay in air conditioning until the game began.

Of course, I did my traditional circumnavigation of the ballpark before all that, and found a highly unusual setting for a ballpark. Right past the right field line: an apartment building. Had I been so inclined, I could have tossed popcorn into the pool. Pretty good view of the park from the upper floors, too: if ever I move to the northeastern suburbs and exurbs

of Atlanta, perhaps I will select one of those apartments in which to live.

The apartments lay out a critical issue with the ballpark, however, and it is the same issue that I had with SunTrust Park: the antiseptic nature of the location. This ballpark is both everywhere and nowhere. To get there, we drove past strip malls and 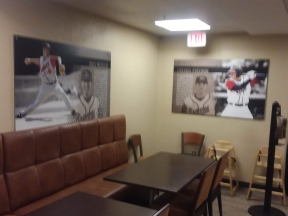 housing developments that could have been any neighborhood outside of any city. And we drove for a long, long time: highways and arterial roads that kept finding more neighborhoods and more strip malls. Finally: the ballpark.

The ballpark didn’t have much going on in the way of local color that I noticed anyway: I appreciated the Braves pictures down in the air conditioned room that we paid top dollar for, but beyond that, this was a pretty low fail in the “do you have any idea where you are” test. And not only did we have no idea where we are, but people didn’t seem to know where the 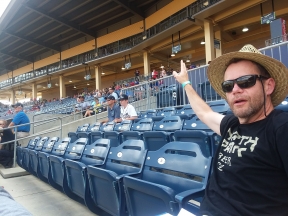 ballpark was, either. Only 1,667 came out to watch Vladimir Guerrero, Jr. visit on a Sunday afternoon. Yeah, it was hot, and yeah, it’s a church afternoon. But I suspect that even the biggest fans in Atlanta (minus these 1,667) just didn’t want to drive all the way out there, especially with a simultaneous Braves game in a different antiseptic suburb.

Fun afternoon for us, though. I do enjoy being in the front row. Although I didn’t factor in that Bisons’ players would be 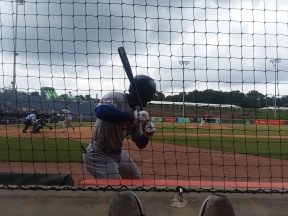 blocking out view from time to time, I still loved the proximity to the play, and the ability to hear conversations between players (the silence of the many empty seats aided with that). Matt even struck up a conversation with a Bisons’ player: I think it was Dwight Smith, Jr.. Matt asked him if Buffalo was cold. Smith’s answer: not so bad in the summer. Hell, I didn’t need a AAA ballplayer to tell me that.

But I still am impressed with how regularly Matt can strike up conversations with strangers. I recall his discussion with 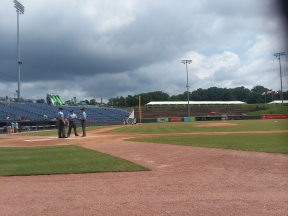 one of the workers in the air-conditioned palace. She mentioned how she was a teachers’ aid, and that this was her second job, and that she still was struggling to make ends meet because of health care costs. How Matt manages to elicit that so easily, and then make her feel his concern, and all within a literal minute: well, I’d like to bottle it up.

My conversations were not nearly as important or, I have to admit, even as verbal. But my conversation was with Vlad.  He headed into the on-deck circle in the first inning, and this transpired: 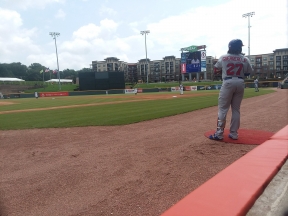 That’s right: I was acknowledged by one Vladimir Guerrero, Junior. He was batting .345 with an OPS over 1.000 when this happened, and I believe his average went up thereafter (although not in this game). I hope he remembers me. In fact, I am confident 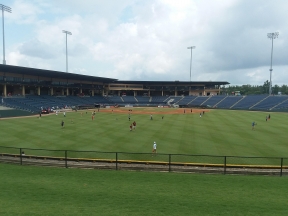 he does. When he gives his Hall of Fame acceptance speech about a quarter of a century from now, do not be surprised when he mentions this moment.

Shout out to the young woman from Saskatchewan, whose name I have forgotten, who was seated next to us and put up with our foolishness. She was a long way from home, but sets aside a trip to ballparks every year so she can take photographs. I hope that she had some really good ones from this hot, hot day. 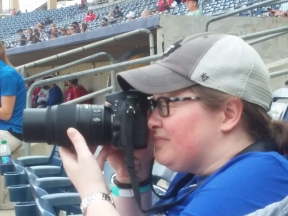 REGIONAL FEEL:  3/10.  I guess I can give some points for hot and humid, but there truly wasn’t much going on here that said “Georgia” outside of a few photos in the air conditioned room.

SPECTACLE: 4.5/5.  Nice here. Not much except for families throwing the ball around on the field prior to the game. Good and quiet: appropriate for triple-A ball. 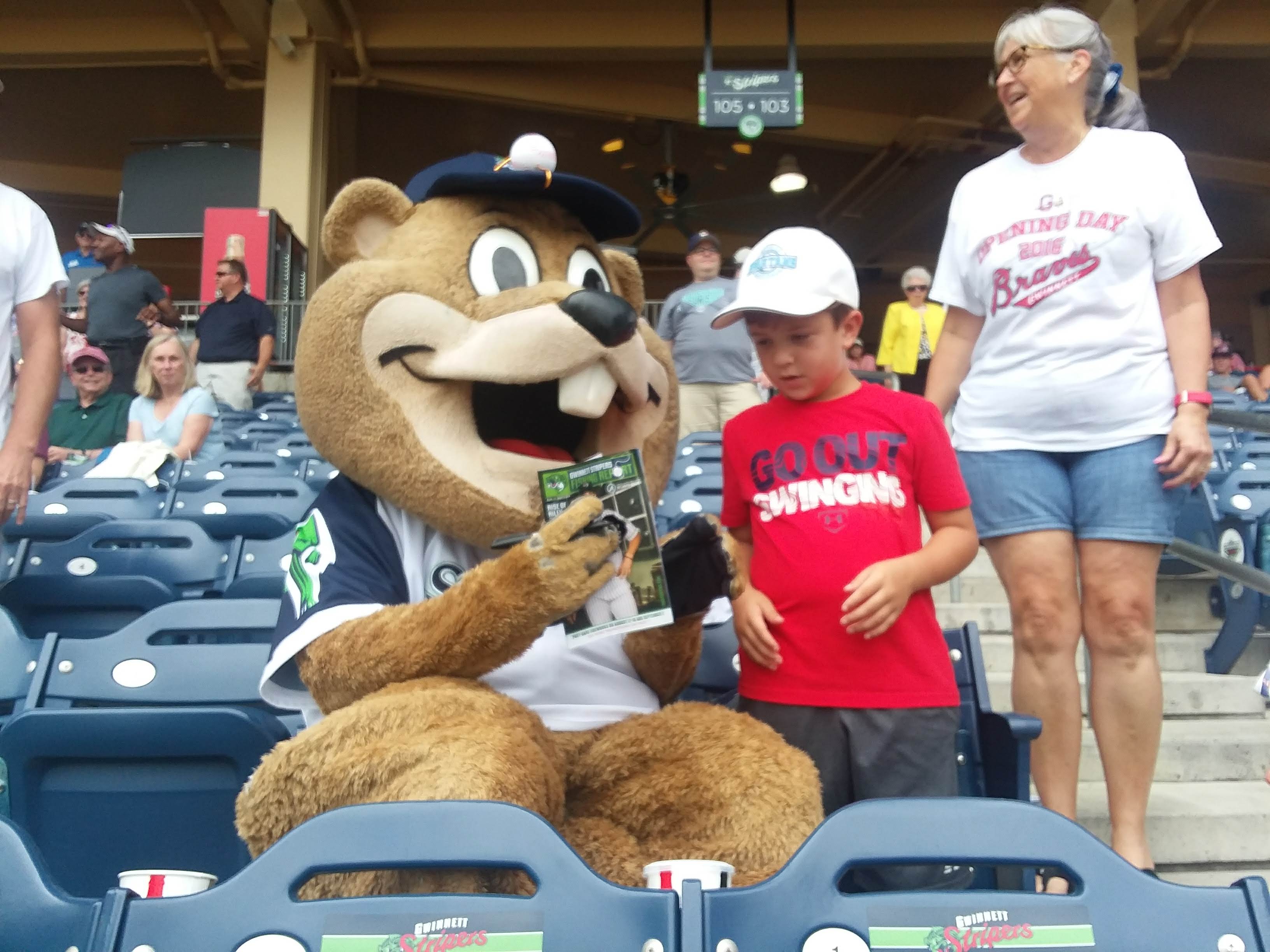 Love the name Stripers (it’s a fish). Very appropriate, and I bought a hat: which I don’t often do on these trips. The mascot, Chopper, I am less sure about. Turns out he’s a groundhog, but I had to check his Twitter feed to learn that. There, I no longer feel the connection. Feels right if the team moves to Punxatawney, though.

I remember that walk around the park, and how long it was: often a ways back from the park. Not much going on in the way of history or exhibits that I remember, though.

No issues here, although no real challenges, either.

Points for my Canadian friend, but where was everyone else?

Thanks, Vlad!  Quality play brought this up a bit, but miserable heat brought it down.

Decent pitchers’ duel between Kyle Wright and Mike Hauschild brings us to the 8th. There, the Bisons’ Jonathan Davis homers to untie the score. Reese McGuire then scored Vladimir Guerrero, Jr. on a single to tack on a run.

Two hits and an RBI for Sean Kazmar, whom I had last seen 8 years earlier as a Portland Beaver.