It was the best of parks, it was the worst of parks.  Michelle and I were both tremendous fans of Dickey-Stephens Park

pretty quickly.  Its location on the river and views of downtown (quite lovely…trust me, sit on the third-base side!) and even of the state capitol building (if you stand on the walkway in left-center field, crane your neck just so, and look out past the right-field foul pole), make for a lovely aesthetic experience.  And the Travelers Baseball Museum on site is precisely my favorite kind of thing to see.  Celebrations of Arkansas-area players and–be still my heart!–umpires abound.  Did you know that Bill Valentine umpired the

1965 All-Star Game?  Did you know that two recent Travelers who have pitched no-hitters–Jose Jimenez and Bud Smith–each went on to pitch a no-hitter as a rookie?  And that Bud Smith did it in spite of an incredibly unfortunate anagram for his name?  I love locally-oriented baseball museums.  I wish they hadn’t charged me a buck to get in there, especially since it’s less a museum and more a walk-in closet filled with memorabilia, but I still really enjoyed it.  The ballpark did very nicely in exuding Arkansas to me, and since my wife and I were fans of Little Rock as a city (recommended:

a burger and shake at the Purple Cow), we liked that feeling.

In addition to the museum, there were a couple of other nice touches to the place.  The ballpark hasn’t (yet) pimped out its name to the highest bidder; indeed, it’s named after two sets of brothers who were instrumental in Arkansas baseball’s past.  (The “Dickeys” are baseball playing brother Skeeter and Hall-of-Famer Bill.)  As one approaches the ballpark, lampposts are festooned with shots of the Dickeys and the Stephenses from back in the day.  That’s wonderful.  Isn’t is sad that it’s now considered quaint and retro to have a stadium named after an owner?  But keep it.  The name might be verbose, but I like it. Additionally, the ballpark features a nice perk for its high-paying customers and groups who have the barbeque porch down the right-field line.  As people 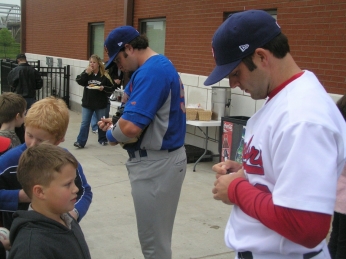 eat there before the ballgame, they are positioned in a spot that the players walk through between the clubhouse and the field.  As such, all of the players and coaches on both teams have to walk through the barbeque area both before and after the game.  I can see where it would be a pain for players to have to walk through fans twice a day (as they do at High Desert), especially at the double-A level where legitimate rising stars 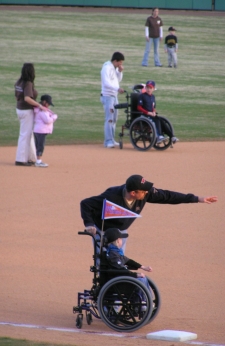 might fight through decent-sized crowds.  So while I don’t usually like segregation by economic status at ballparks, I’m okay with groups having to pay for a shot at an autograph.  And I especially like the way that the players stood for what seemed to be a very long time signing.  (In the nearby photo, that’s Midland’s Tommy Everidge and an unidentified Traveler.)

But once the game got started, I’m afraid Dickey-Stephens Park had too many flaws in the way it presented the game to be ignored.  I’m always a fan of getting loads of information in my programs, etc.  At Dickey-Stephens Park, I learned that it’s far better to have no information than to have inaccurate information.  The scoreboard, the PA announcer (who had an awesome voice, by the way), and the uniform numbers never seemed to agree on who was at the plate.  Of course, if there were a pinch-hitter or other change, the PA guy took his sweet time letting us know, if he did at all.  There were ballplayers on the field who were not in the program, which, while acceptable on opening night, is not at all OK on the second and third nights in the program inserts, since they are printed out that day.  Net result: 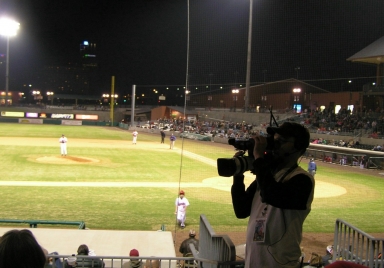 in our efforts to score the games, Michelle and I came up very, very wanting in terms of good information.  They tried to keep track of players’ stats on the scoreboard, but there were times I simply didn’t know what they were talking about.  Plus, they sure did look like they were dropping an F-bomb at me, perhaps because I was looking at the scoreboard for accurate information:

Now, seriously, did they really have to use such language towards us?

Promotions were at times distracting.  I’m not a huge fan of the guy walking around the stadium filming people going batty for the scoreboard video screen…and I’m especially not a fan of his when he stands in front of me for several pitches, blocking my view.  I’m not anti-promotion–hey, I had the lucky program and won an Outback Bloomin’ Onion!–but I am anti-distraction, so this dude needed to sit down.

In any event, this was a beautiful ballpark in a nice city, but there was enough negative–poor presentation, icky brown grass, and a cameraman blocking my view–that it won’t get a very high score.  Still, in spite of that, it’s well worth a visit.

Regional feel:  9/10
Fantastic.  The museum, coupled with the river and the downtown skyline, make for an unquestionably Arkansan experience.

Spectacle:  3/5
I like winning contests, but I don’t like sitting behind a standing camera guy for several pitches. 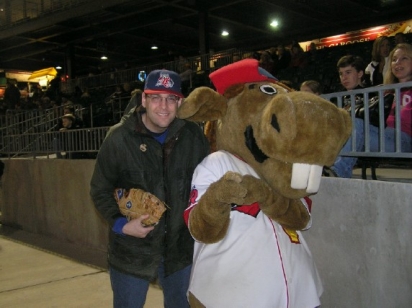 Here I am with that something-or-other…a horse?  a moose?  a whatever?  His name is simply an abomination to all that is holy…Shelly.  Please note the Shell Oil logo under his left elbow.  That’s right:  the Travelers have pimped out the name of their mascot to big oil.  Ick.  This makes me want to buy a hybrid even more.

Scoreability:  0/5
The scoreboard and PA actually led to more confusion than clarity.  If I can score a game easier without the ballpark’s “help” than with it, that’s a pretty severe repudiation of a ballpark’s ability to do what a ballpark ought to be doing.

Intangibles:  2.5/5
What can I say?  There were parts I loved and parts I really, really didn’t love.

Myron Leslie hits a game-winning solo shot in the 10th for Midland.

Huge pitching in the second game.  Andrew Bailey pitchers 6 innings of 2-hit ball for the win for Midland.