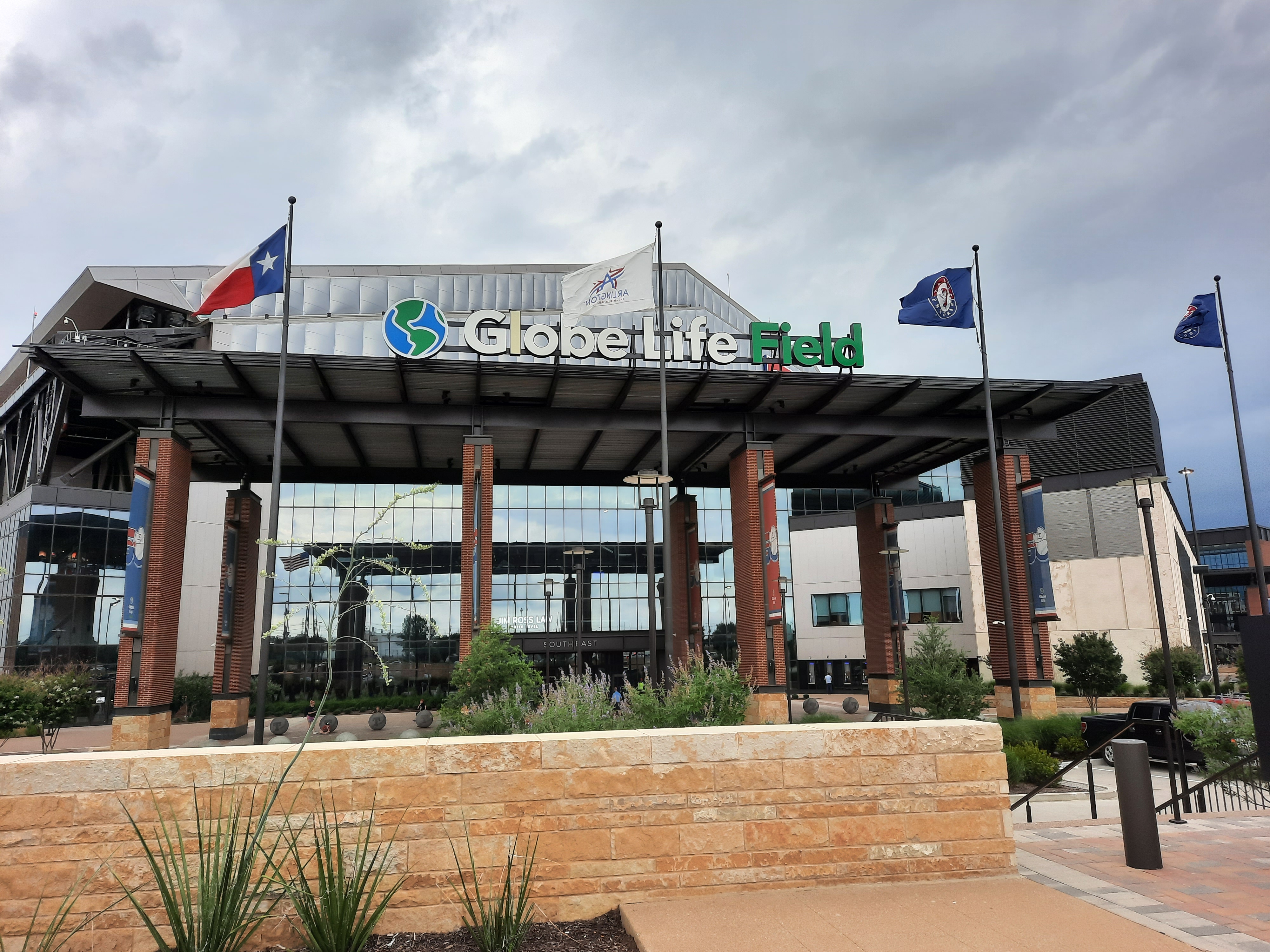 Click on any photo to see a full-size version.

Time to top the tank up to full again! I had not been “complete” in my MLB stadiums since I made it to Busch Stadium (the 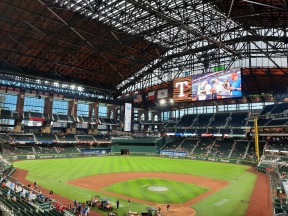 current iteration) in 2007. Seven ballparks have opened since then…and two of my children have been born since then. So my ballpark appearances slowed a little, but by the early 2020s, I noticed I had a legit shot at getting current again–so I slated a weekend plane trip down to cross off Globe Life Field as #29 of the current iteration of MLB parks.

In the process, I got to see my team, the Seattle Mariners, on the road. Texas became the fourth road spot where I have watched the Mariners play, joining Kansas City, Cleveland, and Oakland. As in the other four ballparks, I wore my hat and 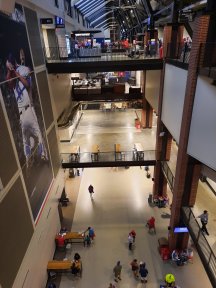 showed my allegiance. It turned out to be a pretty delightful experience. I can’t say I have seen as many Mariner fans on the road as I did in Arlington that weekend. And, just with my hat and Julio Rodriguez sherzy, I was able to have some delightful interactions.

Hat tip here. Hat tip there. “Go Mariners!” over there. It felt a little like being a cute kid in a Halloween costume: so many people wanted to point out what I was wearing. Eventually, this turned into the people sitting behind me on Friday night talking about where they lived before they had to move down to Texas. And I got a shot of Rick Rizzs waving behind me before the game. It felt good to be a road fan. 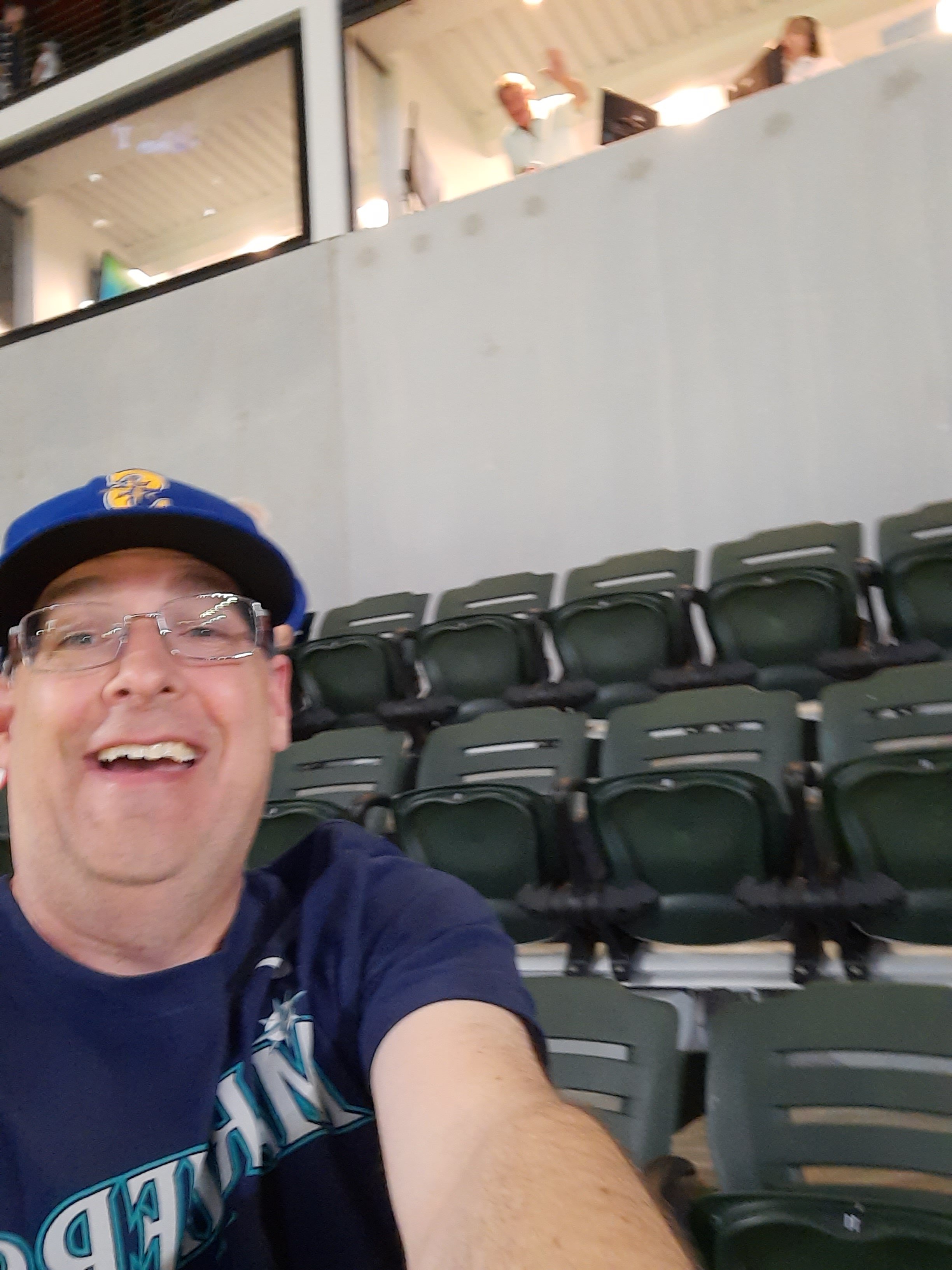 The ballpark itself left me feeling a little wistful. I liked the old ballpark–found it to be a wonderful celebration of Texas history. They shut it down after only a quarter century because they wanted a place that could stave off the heat. So they built this place 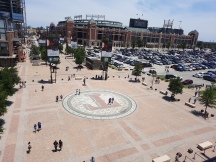 that, consequently, reminds me more of Arizona’s ballpark than 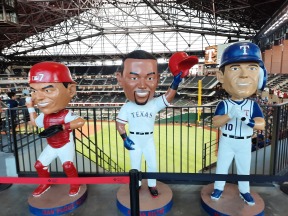 anywhere else (and that’s not a compliment, I’m afraid). From my seat above first base, I could look through the windows at the old place, which now serves as a stadium for XFL and lower-tier soccer. I feel like it deserves better. The indoor feel of the place is rather antiseptic: hard to feel overwhelmingly Texas in there. I do like the Rangers history in the parking lot and the bobbleheads and occasional celebration of a guy like Ruben Sierra (every team needs to celebrate its guys-who-will-never-make-the-Hall-of-Fame-but-who-were-really-good-for-us). But it’s not the same as those friezes at the old place.

That said, there was a massive thunderstorm one night and it was 92 degrees for our matinee…so maybe that’s all for the best? I do wonder if they could have incorporated more of the positive aspects of the old place into the new place. It does 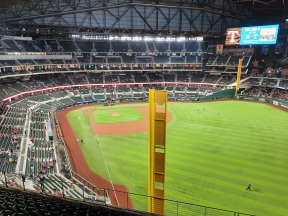 appear to me like the new place was designed almost exclusively with the needs of the insanely rich in mind rather than of fans of lesser means (or even fans who are merely well-to-do).

To me, it begins with the setup behind home plate. The Rangers are, to the best of my ability, the only team I can come up with who have suites on the lower levels, thus delegating the best space in the ballpark not to fans willing to drop a bunch of bucks to watch the game, but rather to fans who are there not to watch a ballgame. We’re not talking the first few rows of the ballpark, either. It looks like the entire lower bowl is reserved for these. “Close the deal,” one of the websites advertising the 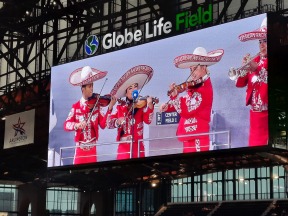 suites says as I check it out in 2022. Sorry–that actually disgusts me. This is a displacement of a real fan with money–say, a dentist or something–who wants to watch their team from up close. It’s all that’s sad about a money-first attitude over what I feel is something valuable to an entire community. Don’t “cheer on the team.” “Close the deal.” Jiminy Christmas. That’s not why a team exists.

Still, in spite of the well-documented Costco feel of the indoor place, I did like what they did. A big, beautiful mural of Rangers past and recent-past sits on the concourse, and between innings, the scoreboard would show those images, so you’d see Michael Young or Jim Sundberg or some such looking over the game. I liked that and would love to see more of it. 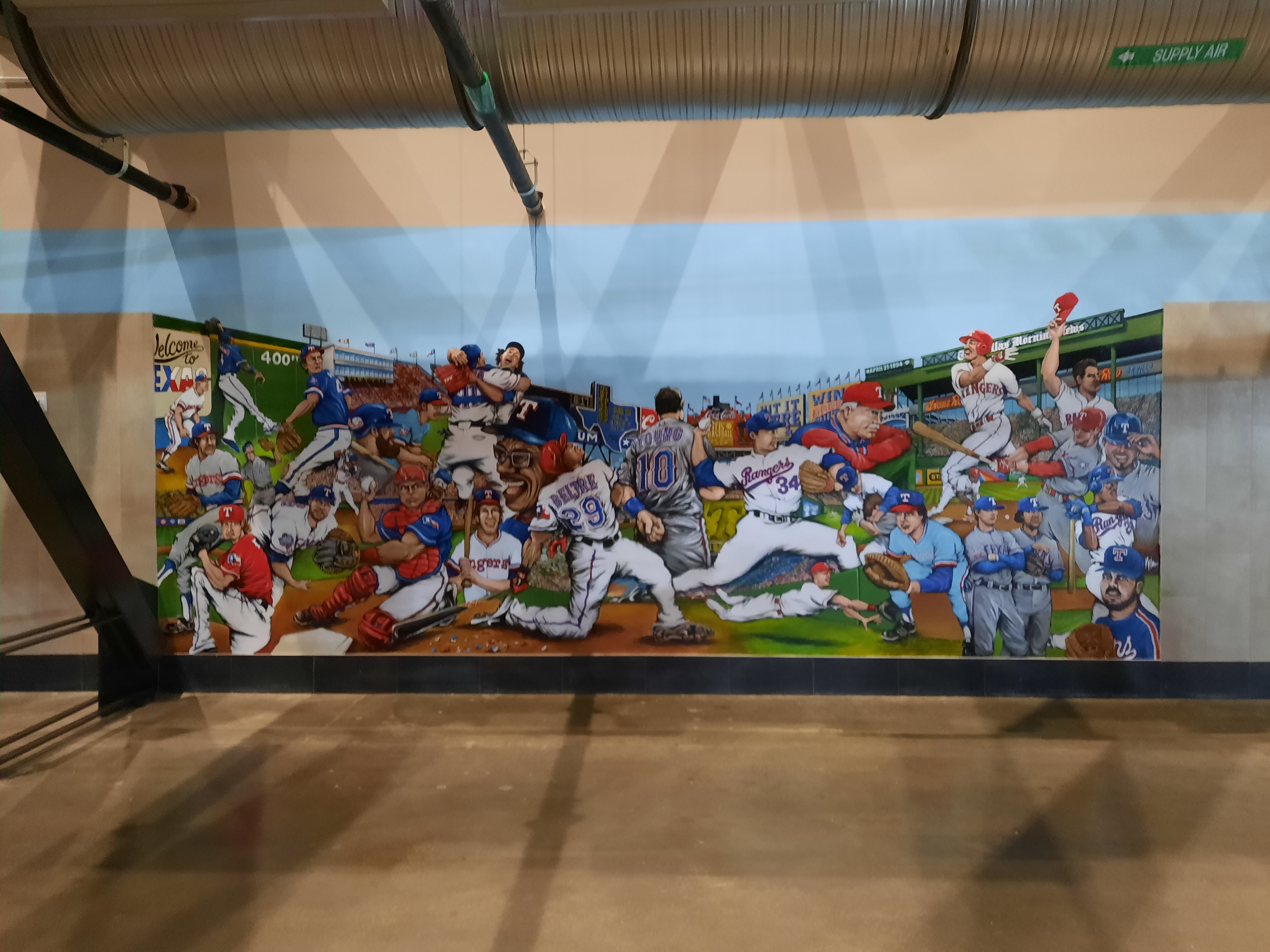 That said, what I did see was fabulous–felt like a reward for spending time and money getting down to Texas for that weekend. I saw my Mariners come back in the ninth inning to pull off crazy wins. Twice! The first was merely a ninth-inning home run by Eugenio Suarez that turned a 3-2 deficit into a 4-3 win. The second was much crazier.

After driving up from Round Rock that day, I caught the matinee–the first pitch was delivered at 1:39 PM. My flight departed at 7:35 PM. I had some work to do (dropping off rental car, getting through security, etc.), but I figured I’d be in decent shape 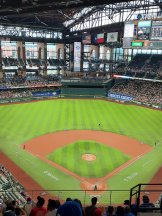 to make my flight. Still, I decided that the last possible second I was comfortable leaving would be 5:15 PM. DFW isn’t that far away, but even so, I had no intention of missing my flight home.

The game went along at a brisk pace, but when the Mariners gave up two runs in the bottom of the eighth to fall behind 5-2, I figured everything was done. It was about 4:40 PM, so I’d not only make my flight, but I’d have time to chill at the gate for a while.

But my Mariners went bonkers. Home run by Ty France. Singles by Julio Rodriguez and J.P. Crawford. And then–holy crap, there he is again! a game-tying double by Eugenio Suarez.

Damn. Miss my flight, or miss the end of the game?

I cut the baby in half. After the Mariners pushed across the lead run when the stupid stupid stupid zombie runner scored on a wild pitch in the top of the tenth, the clock read 5:10. I zipped down the back staircase and looked out past the seats whenever I could (and, incidentally, Globe Life field leaves very few opportunities to do that: when you’re on the concourse, 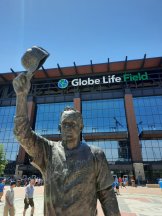 you are sadly very much removed from the game). I was able to figure out that there were two on and two out when I got to the center field exit. I paused, looked out across the 400-some feet of field, and watched catcher Cal Raleigh squeeze a foul pop-up to secure the win for the team. And I zipped out and got out of the ballpark before everyone else…save one guy next to me in Mariners gear, probably headed to make his own flight. We ran out into the oppressively hot day.

“Go Mariners!” he said. I said the same. 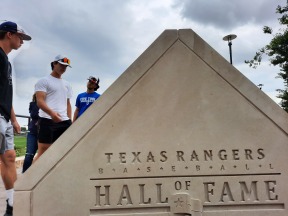 I beat the traffic and made my flight–a little tight, but with some time to spare.

So–overall, this joins Atlanta as a ballpark that, while nice, slick, and modern, leaves me wondering what we’ve left behind as much as what we’ve gained. I can head back someday…but I don’t find this place to be so special as to merit another trip just for baseball. But I am glad I made this one.

Eugenio Suarez just kills it, with 7 RBI and 2 home runs over the two games, including critical 9th-inning hits in each. My wife hates his chessboard-style divided-color hair, but for his work here, I will always owe him my allegiance. (But I won’t make my hair like his. Wife says she’d divorce me if I did.)

First career hits for the Rangers’ Ezequiel Duran–a single, then a go-ahead solo HR–looked good to give the Rangers the win in the Sunday game until Eugenio has his way.

Great pitching from all four starters: Dane Dunning and Martin Perez for the Rangers, Logan Gilbert and George Kirby for the Mariners. None, obviously, figures in the decisions.