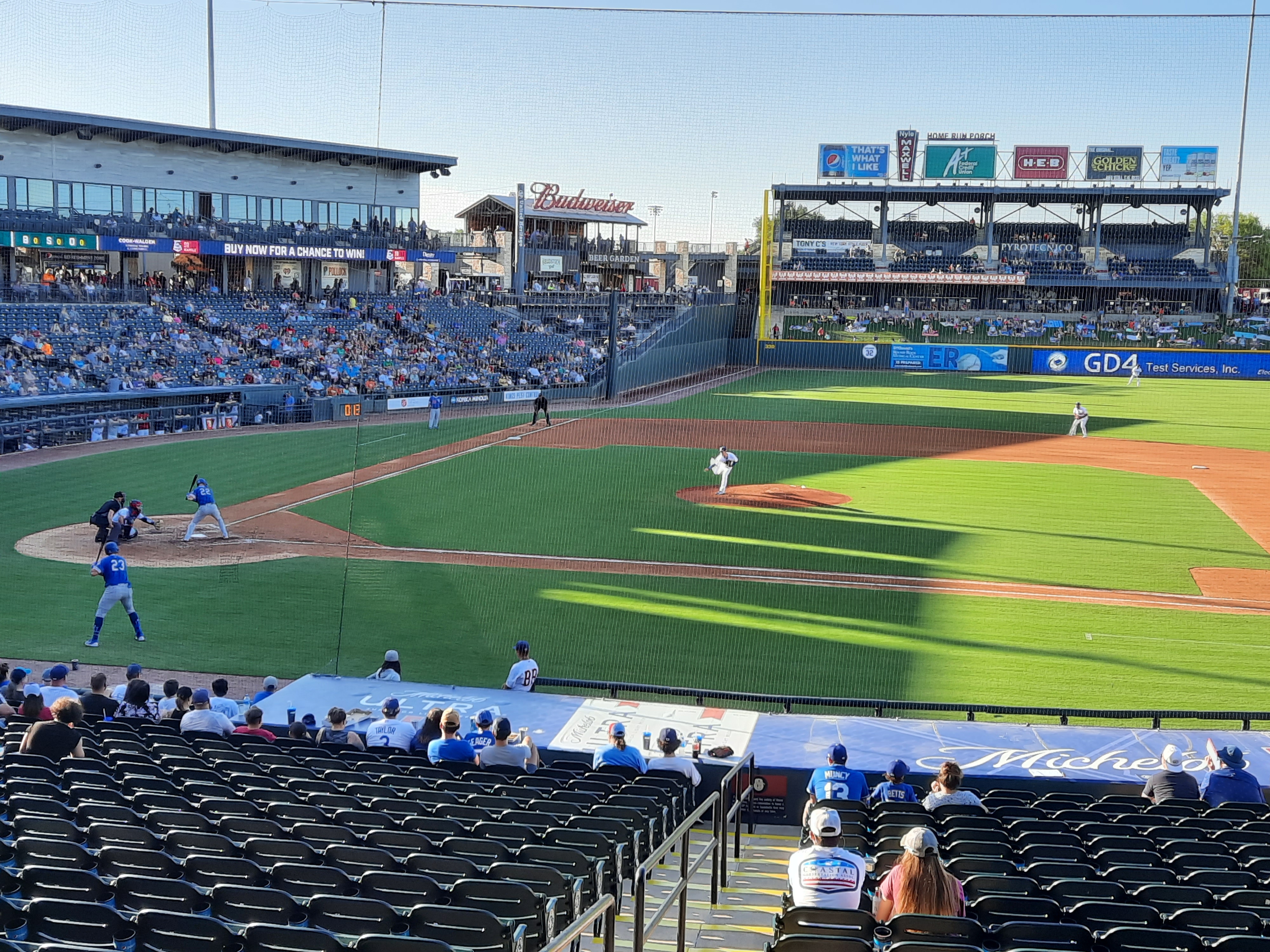 Click on any image to see a full-sized version.
In between my two games in Arlington, I took a day to drive down to Round Rock for a ballgame. I still needed to cross Texas off of the list, and with Frisco out of town (alas), Round Rock was the closest I could go to get a ballgame in. Rather than zip 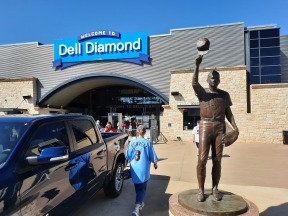 down I-35, I took back roads down the way. Well, not farm roads, exactly, but state and US highways instead of the ubiquitous Interstate. Drove through a couple of old downtowns (depressed old downtowns, alas) and saw a fair number of ornate entrances to ranches. Listened to podcasts and to some of my preferred music. Had a sub sandwich and chilled out. It was a great day. Long non-interstate drives have become a hallmark of my ballpark travel, and I was glad to have this one.

Dell Diamond was the destination at the end of all of this, and it turned out to be a fine place to see 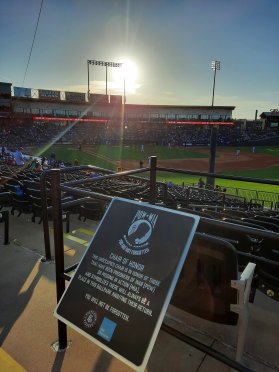 a ballgame on a hot June night deep in the heart of Texas. In some ways, it was standard triple-A fare–nice seats, decent concessions, and really good baseball that I could afford to see from right behind the dugout. The Express did a fine job of putting a Texan spin on the experience, and I’m glad I made the trip down.

There were ways in which the setting of this ballpark didn’t do it any favors. It’s sort of way off in the Austin suburbs, with nothing around it that is specifically Texan. I did appreciate that there’s a little bit of a park by the side of the ballpark, and that one could, if one wanted, take a little bit of a nature hike before going in for nine innings of baseball. So that was a little bit Texan. But I didn’t get a sense of neighborhood or region on the inside. 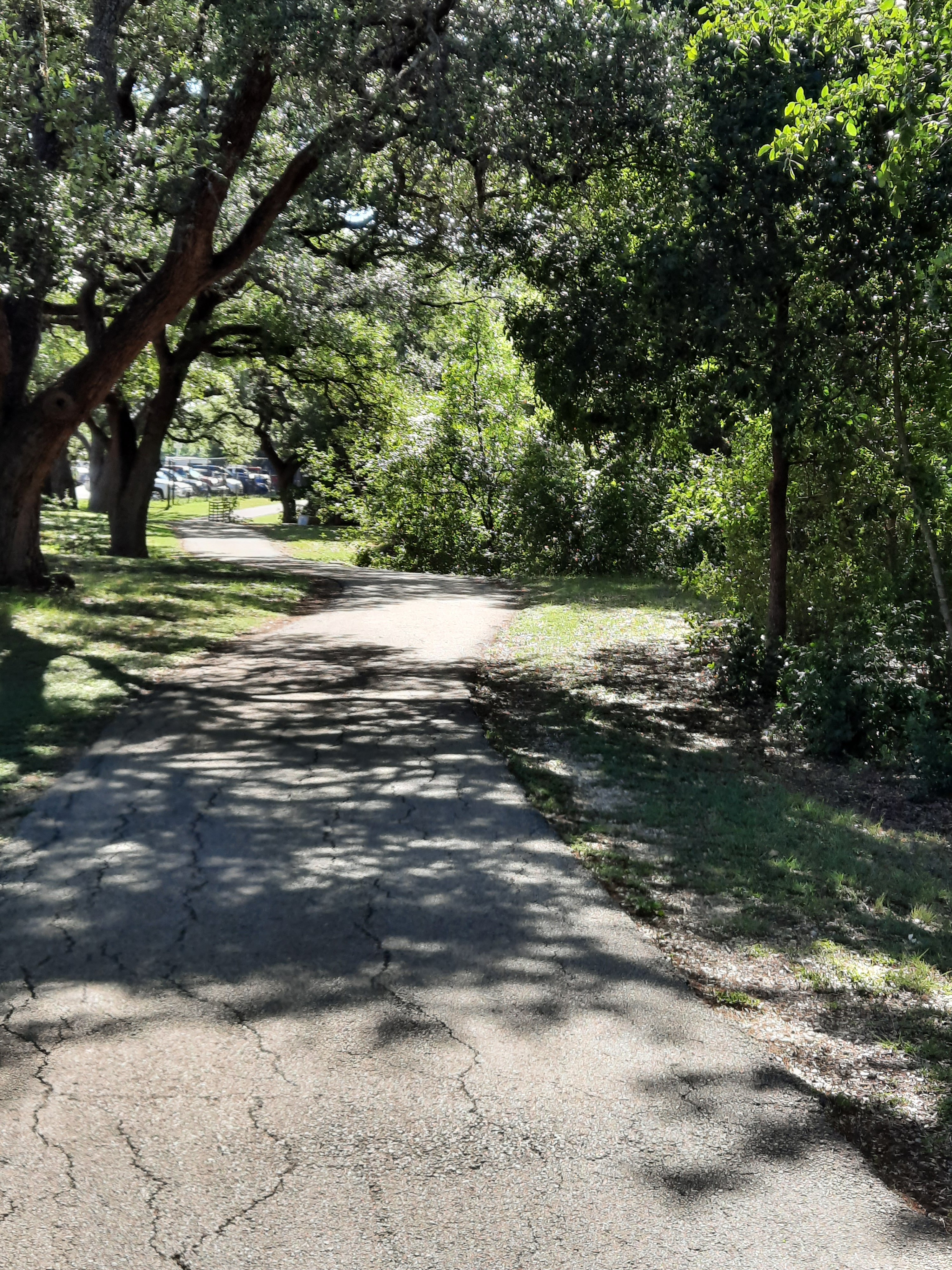 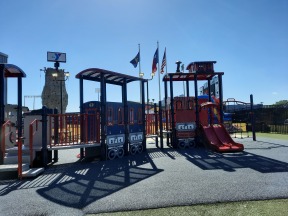 For starters, the name the Express is a pretty killer homage to Nolan Ryan. His statue greets fans here. The train in the play area is number 5714–Ryan’s career strikeout total. And, wonderfully, there is a sculpture of a bull named Moo-lan Ryan. You can’t go wrong there. So in Nolan-love, this ballpark wins the day. 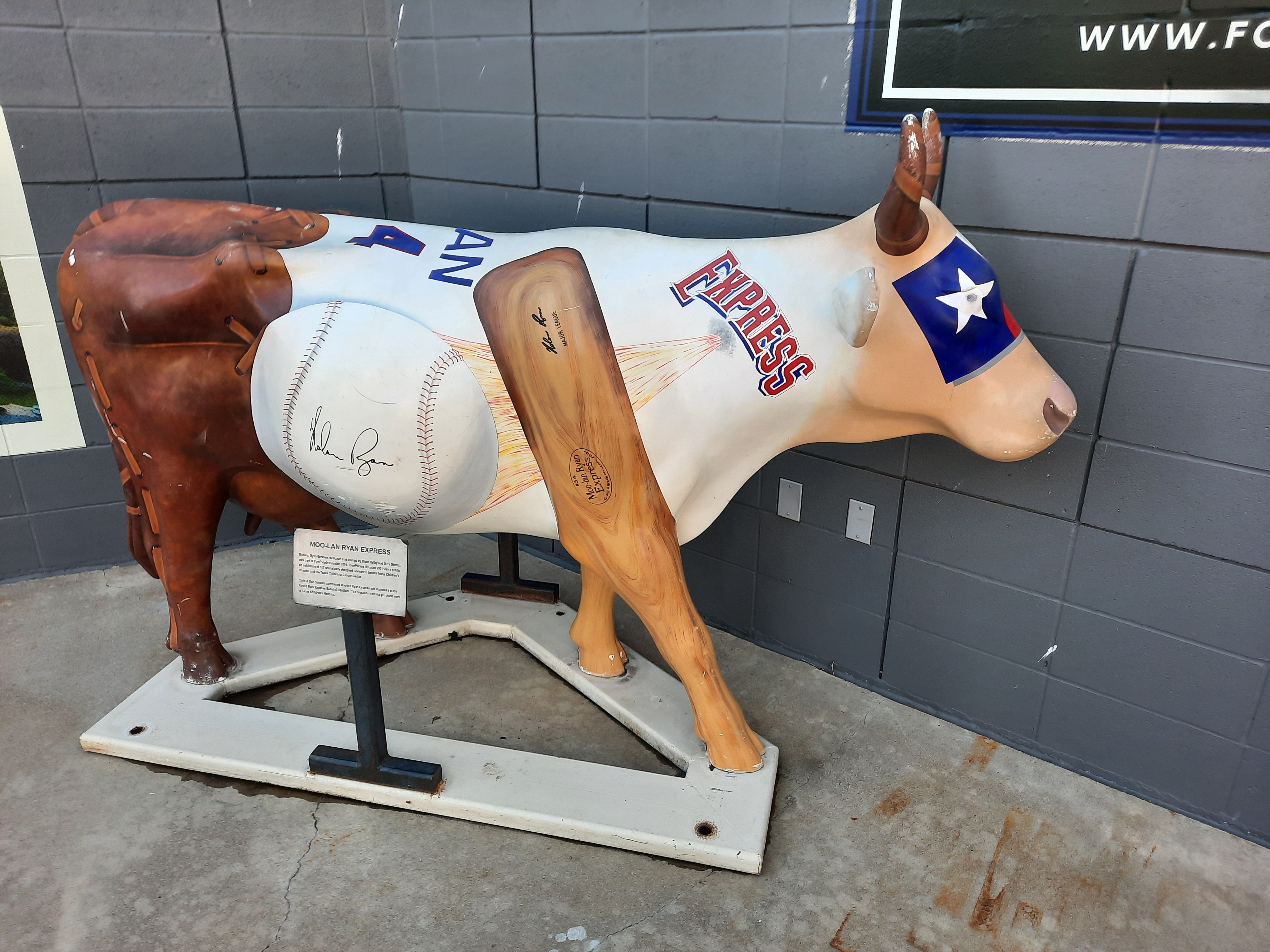 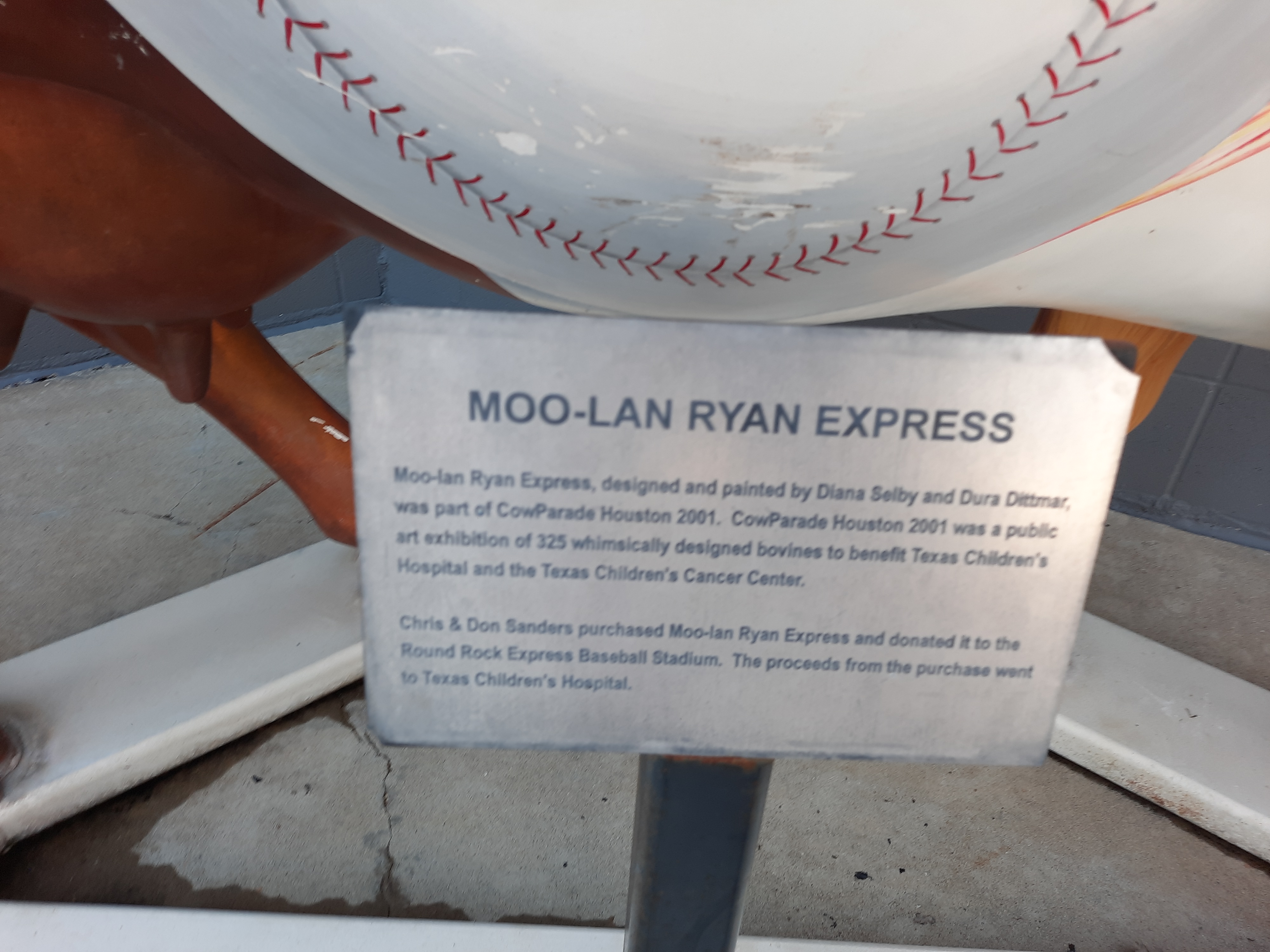 Once inside, a sad reminder. The Express set out a big card to sign for the community of Uvalde that had just suffered their horrific school shooting a week and a half earlier. 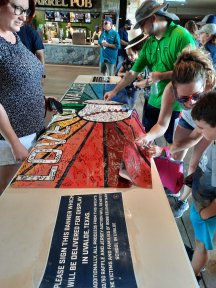 The Express weren’t just giving their hearts, but also their money: the 50/50 raffle proceeds were going to the Uvalde community that entire week.

As I looked for dinner, I found the concessions felt appropriate and local. I had a hot dog with pineapple salsa, but could have had Tex-Mex or Ribs if my legendary GI issues would allow it. And the ballpark allowed a 360-degree circumnavigation and a

fair amount of shade on a hot day.

This also was the first game I ever saw with an automated strike zone. It turned out to be…absolutely unnoticeable. Only at the start, when I heard Oklahoma City manager Travis Barbary shout “The robot didn’t like that one!” at an early pitch by Round Rock’s starter Josh Sborz. It simply wasn’t any kind of issue. I have somewhat mixed feelings about this as a sports official: I suspect there are going to be some unintended consequences that we’re not thinking of yet. There are pitches that 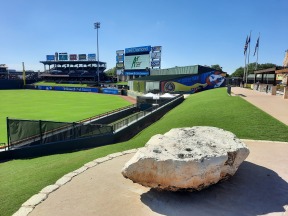 graze the strike zone–like the high one dipping down at the back of the plate–that we might now want called strikes. But on this night, as home plate umpire Brian Walsh dutifully relayed what the robot told him, it was a non-issue.

By the way, Texas, I-35 at night on my way to my hotel room in Waco was pretty scary stuff. I know that the speed limits (80, then 75) are appropriate for rural Texas. I had no issue with them the next morning in the daylight. But at night…aren’t we supposed to drive a little slower? Not a huge fan of that drive.

But I was a fan of this ballpark in central Texas and will recommend it to anyone.

Regional feel: 7.5/10. In some ways, this was just kinda nowhere-suburban. But once on the inside, there was a heck of a lot of Texas to be found in its Nolan Ryan-love and its cuisine.

Charm: 3/5. Not bad, but in some ways sort of typical of high-level minor league ballparks.

Spectacle: 4.5/5. Did a fine job of having a few things going on, but mostly letting the high-level play take center stage. 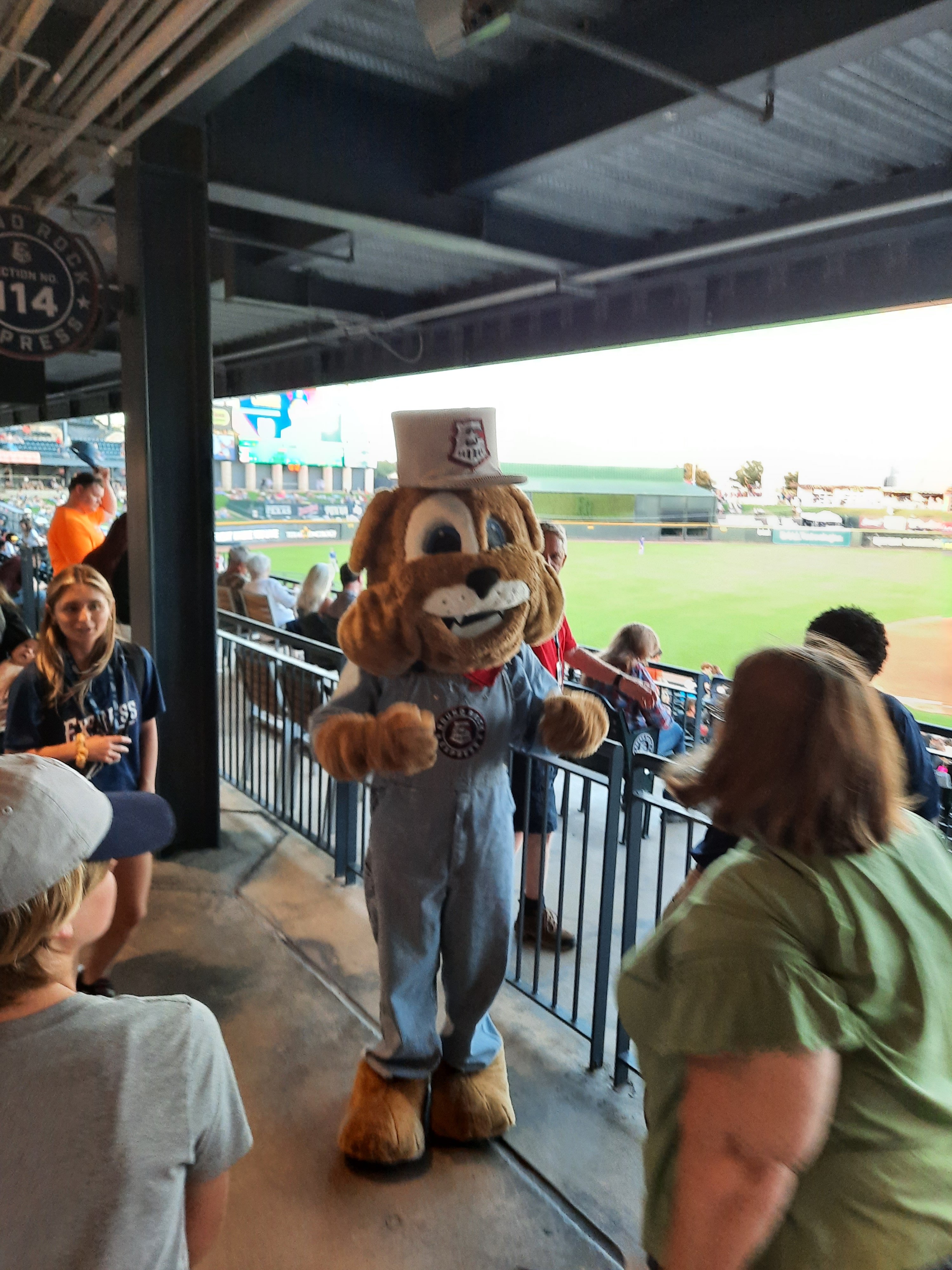 Here’s Spike. Good name for a train-based team. Also the Ryan connection. This was a fine mascot.

Aesthetics: 3/5.
Nothing terribly outstanding here, but a nice sky as the sun went down. 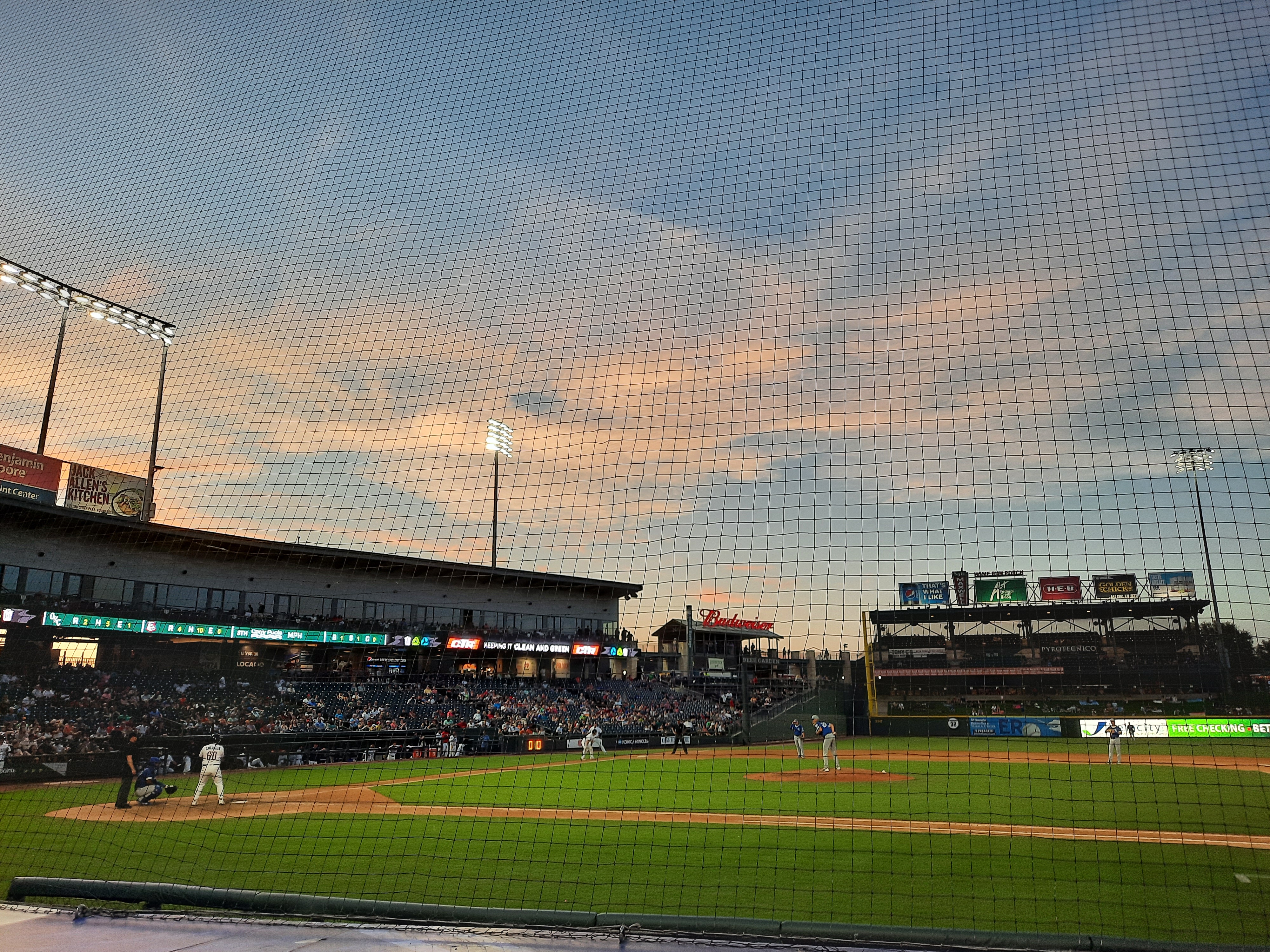 Pavilion area 4/5. I could view the game from absolutely anywhere, and I always appreciate that.

Scoreability 4/5. A little confusing over a wild pitch/passed ball call, but that’s a tough one to get right.

Fans 3.5/5. Didn’t interact much: mostly people kept to themselves save the guy who looked to my scorebook and asked “Are you a scout?” Guy turned out to be a good dude when I told him no, just a fan who likes to score, but I still am confused why scorebook=scout. No scouts score the game.

Intangibles: 2.5/5. I wish something cool had happened to make this a great night, but as it is, it was just kinda hot.

Two solo homers (one each from Andy Burns and Drew Avans) are all the offense the Dodgers can muster against five Express pitchers, most notably Kohei Arihara, who gets the win.

Two hits and two RBIs for the Express’s Yohel Pozo. 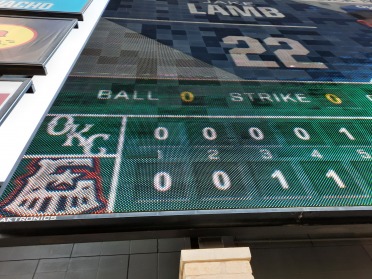 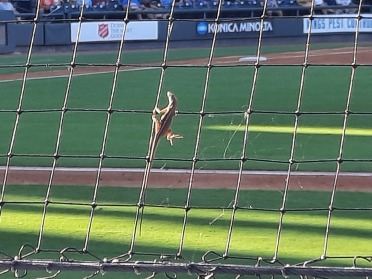 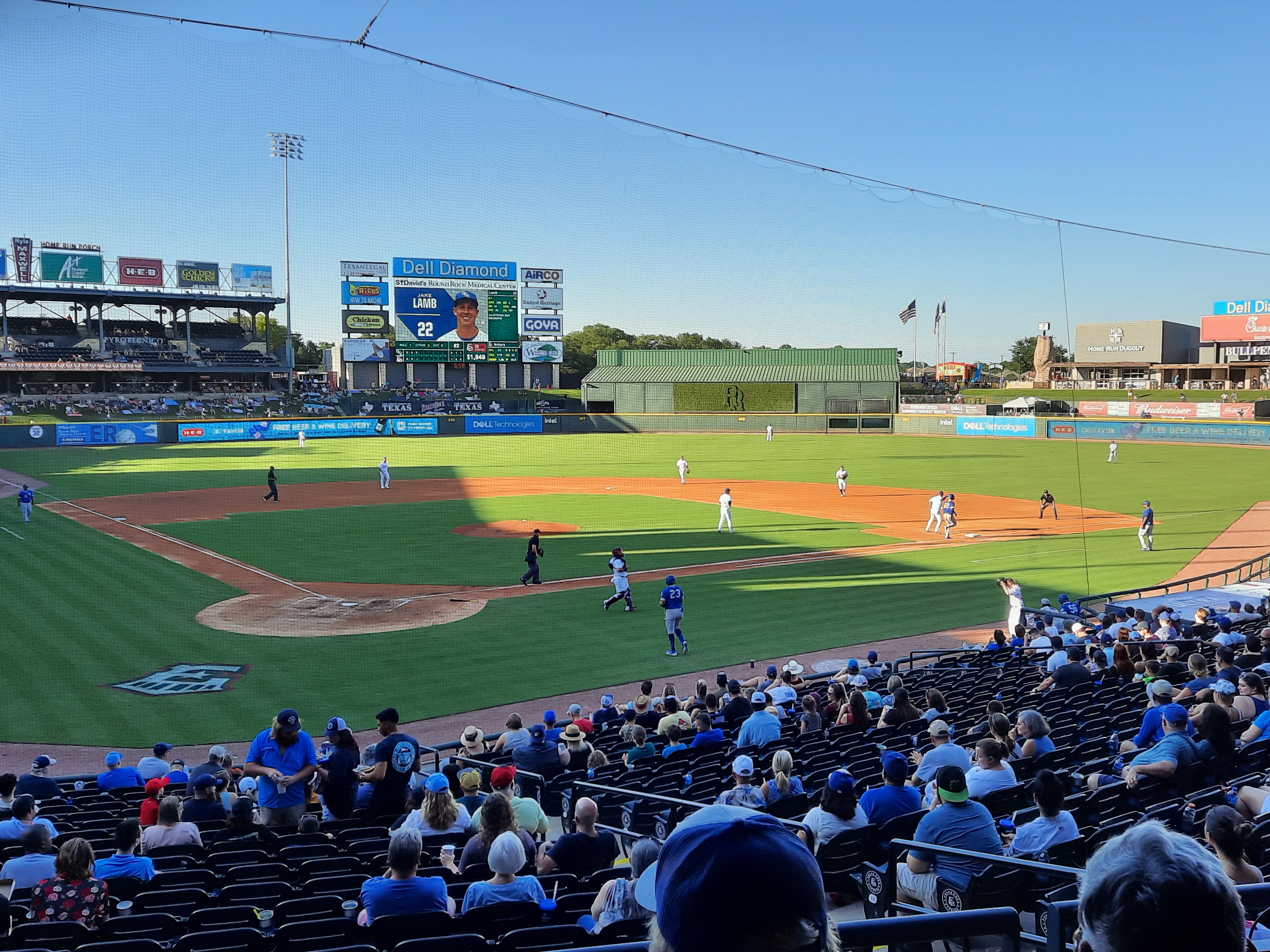