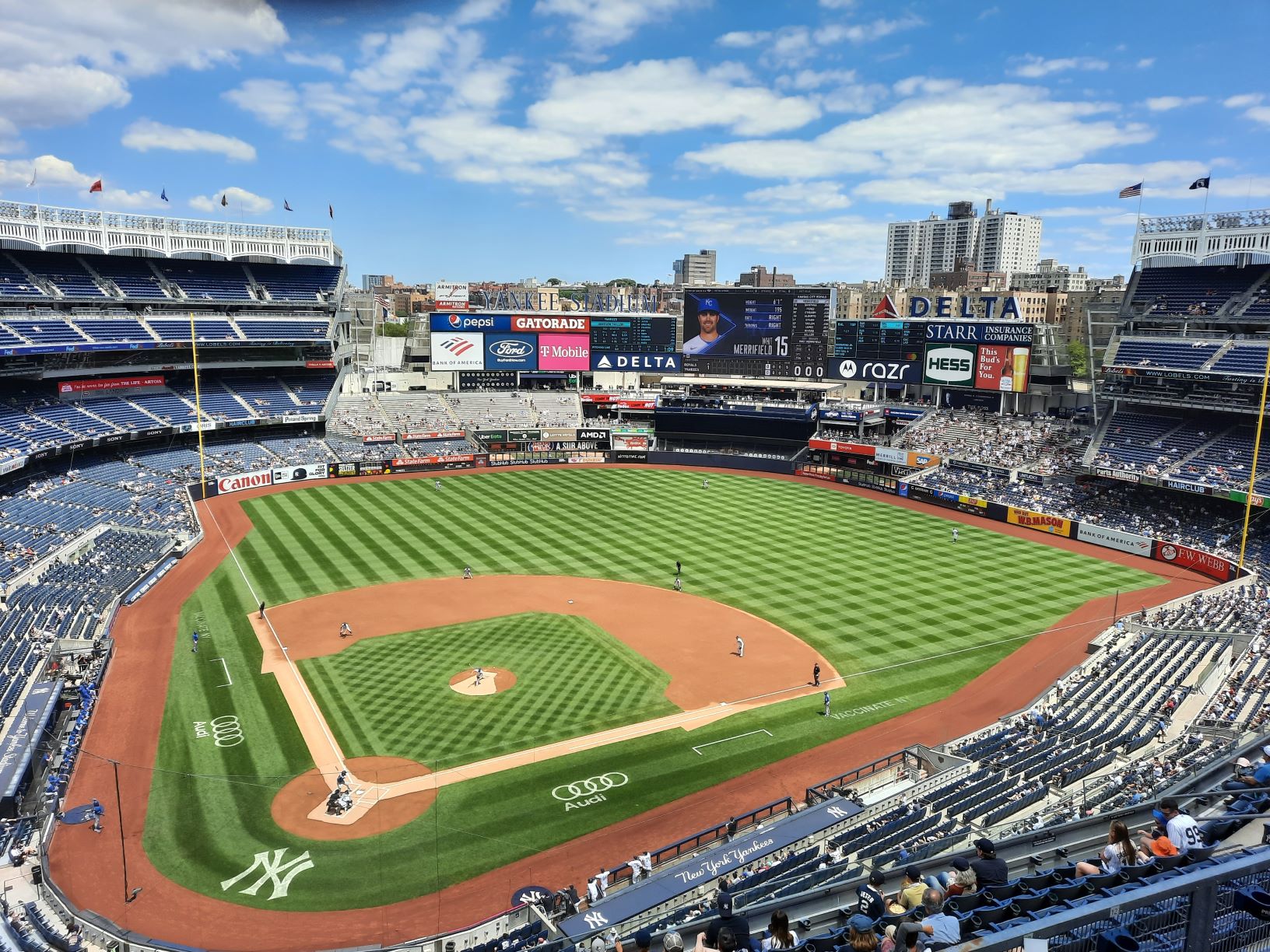 I found the old Yankee Stadium not to be terribly special: I liked hanging out with the ghosts, but didn’t find much special about it. So when I returned to New York to see the new place, I wasn’t expecting much. Turns out I was pleasantly 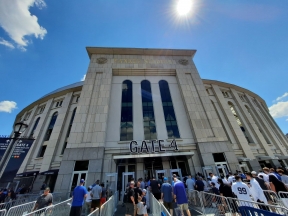 surprised. The Yankees have managed to create a place where they respect the team’s history without going over the top about it.

Well, with one exception. But we’ll get to that later.

I got off the D train and turned the wrong way, thus finding myself a few blocks away from the ballpark in the Bronx. I 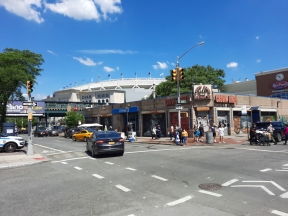 have to say that I really like the cell phone for this reason more than any when I travel. Yeah, I look like the tourist that I am: I mean, I’m carrying a scorebook and wearing my Gwinnett Stripers hat. But instead of wandering around aimlessly, I can sit down and look like I’m just checking out my phone. As such, I got turned back west to the ballpark.

And this is how I discovered one of the things I like most about Yankee Stadium. It is totally embedded into its neighborhood. There are actual, local businesses surrounding the place, like, right across the street from it. Sure, there’s a McDonalds, but there are also sports bars and actual mom-and-pop businesses to be had. I don’t know whether this is different from how it was when I visited the old place in 1999: truthfully, I didn’t poke around 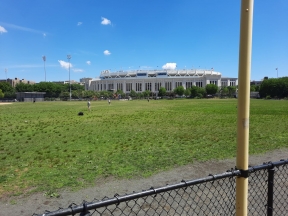 I especially liked Heritage Park across the street. Replacing a baseball stadium with a baseball park is nice enough: I enjoyed seeing a couple of guys hitting fungoes in the new place. The day-to-day business of life went on: I encountered a couple of day care groups walking through the park. I was wondering whether the biggest of the fields was the location 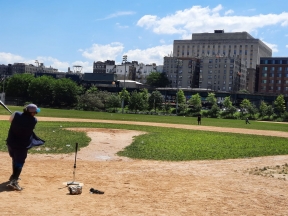 of the infield of the old place: turns out it was close, as second base on the new field is approximately where home plate was at the old stadium. It felt like they got the new park right, with lots of moments of Yankee Stadium history (games, concerts, Papal visits) embedded in stone in the ground. But I felt like, in the nine years since they had put this down, they hadn’t put enough love into it: weeds were in the outfield and the stone plaques in the ground had been trodden over enough that they were barely readable. 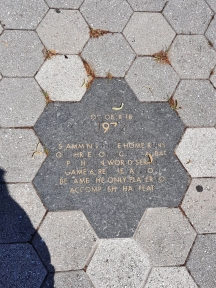 Nonetheless, a baseball history guy like me could wander around that park for a while thinking of the ghosts. I do wonder whether the ghosts stay on the old site or if they move across the street into the new place. I suppose, as ghosts, they can do whatever they please.

I didn’t expect restraint in the way that the Yankees handled their 27 championships (all of them, incidentally, in the old place), but I found something like it. The only real reference I saw to the championships was in sets of photos ribboning 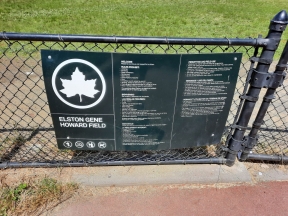 the main concourse, with every championship from 1923 to 2009 commemorated in a few photos of the teams from each year. Seeing a photo of (I think) Scott Brosius jumping high leads me to remember images I didn’t know I had stored in my brain, and looking at the old-time photos: well, seeing the joy of a championship feels timeless to me. Yankee Stadium takes advantage of that timelessness and puts it all together in one place. Even something relatively simple like the food court gives a nod to that history. Above the 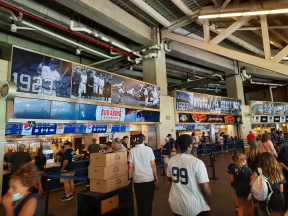 concession stands in the main food court, uncaptioned, are photos of great Yankees eating. There’s Reggie Jackson with a Reggie bar. There are Berra and DiMaggio eating Italian. Eating is one thing we all share, so it’s cool to see these great ballplayer humanized as I’m about to grab my popcorn. It leads to the idea of “I’m just like them,” only…well, nobody’s going to put a photo of me up on the ballpark, so I guess not.

Then, Monument Park. It was pretty much exactly what you’d expect. The monuments look exactly like they do on TV. It’s cool to be there–I took a shot of DiMaggio, 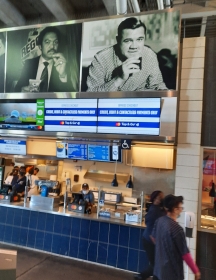 my dad’s favorite childhood player, and texted it to him. I liked watching people responding, sometimes with restrained emotion, to seeing the monuments of their favorite player.

But over it all is a MASSIVE monument to George Steinbrenner. I found it garish–offensively so. Not only is George’s monument bigger than that of all of the players–maybe four times the size–but it is even bigger to the 9/11 monument 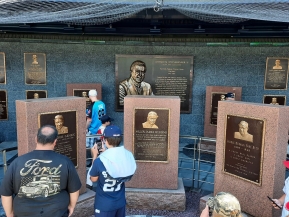 they have back there. It’s appropriate, as egotistical as the guy is: he actually thought he was better and more important than Ruth and DiMaggio and Mattingly…and the heroes who ran into the Twin Towers. I just can’t get over that. As relatively restrained as everything is in the ballpark, that’s how unrestrained George is. He ruins Monument Park.

Right above Monument Park is a place they called the Pepsi Lounge where my ticket gave me access. I didn’t choose to stay there during the ballgame, but I can see the appeal. The Pepsi Lounge is inside the batter’s eye. I had never thought of this as a location where people could sit before 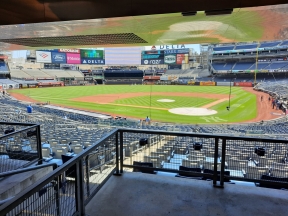 (although it certainly happened before batter’s eyes were blacked out sometime around my youth). They have signs banning flash photography, which is fair enough. But to sit somewhere where I can look straight at the catcher’s glove? That might be worth a return trip.

For this trip, I perched my buddy David and me in the front row of the fourth deck. A sign helpfully said that I could not stand next to the railing, so I army-crawled to my seat to stay in compliance. (No, not really.) It was a nice seat and a fun day. I miss Bob Sheppard, but the current PA guy, Paul Olden, did fine. 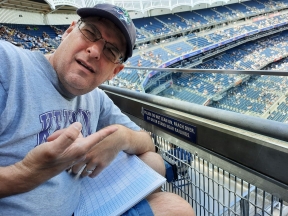 I went in an off year for the Yankees. My experience there in 1999, when the Yankees were in the middle of three straight titles, was that fans were surly. I was wondering what it might be like to be in the midst of an off year: maybe instead of a kid shooting me with a water pistol, I’d experience heavier ammo. Not this time. The Yankees busted out to a big lead early, hit three home runs, and never gave their fans a chance to get mad.

Then, after the victory, Sinatra. “New York, New York.” I was departing Yankee Stadium for the last time on this trip, and I 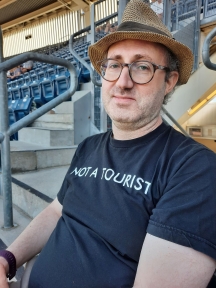 asked David, my native companion, an important question. I know that if I make it there in New York, I’ll make it anywhere. I was at the end of my trip. Key question:

Had I made it there?

David, who is definitely not a tourist, said that yes, I had. Since I hadn’t been mugged or conned, I had made it there.

So there you have it. I can officially make it anywhere.

Nice ballpark, Yankees! I will be delighted to return one day.

Jameson Taillon pitched effectively for the Yankees to get the win.

Hanser Alberto has two hits for the Royals. 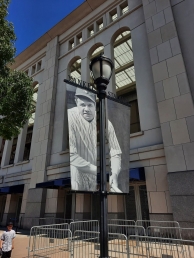 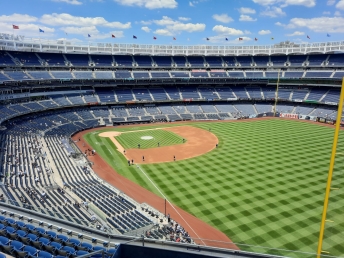