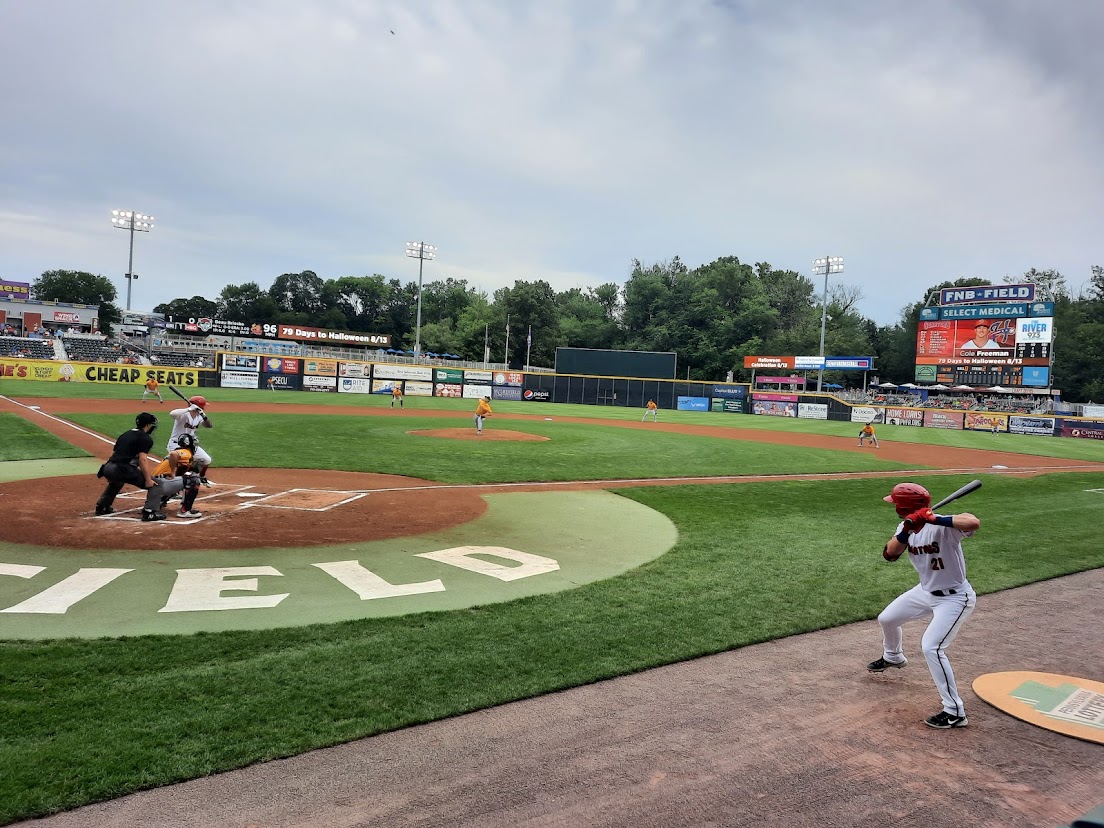 I read about Harrisburg’s City Island, the location in the middle of the Susquehanna River where FNB Field sits, well before

this trip. And I learned about the mini-golf on the island not long before departing on our long drive from Cleveland that morning (with Steven on his 12-year-old trip). What I did NOT realize was that the game was at 6:10 rather than 7:10. So when we got to the island, we were left with a choice: mini-golf or get in line for a Ryan Zimmermann bobblehead? We went with mini-golf. Steven would like for me to report (inaccurately) that he beat me by 27,000 strokes.

That island is what set the tone for the day at the ballpark, and it was quite delightful. There’s a carnival atmosphere (trains, 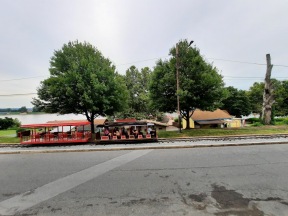 golf, lovely view of the Harrisburg skyline across the river) that feels right for a night at a minor league ballgame. It is hard not to be sucked into having a good time on that island.

The feeling continues when we are on the inside of the ballpark. Like its league-mate Reading up the road, home of what is (as of this writing) my favorite ballpark in the minor leagues, Harrisburg understands the local baseball history angle. While

they weren’t quite as thorough as Reading, they don’t fall short by much. Throughout the ballpark, it’s easy to see commemorations of past Harrisburg players who have gone on to hit it big. The biggest honor, a bobblehead, was being bestowed to Zimmermann that night, and it was cool to see an area on the concourse with life-size versions of past bobbleheads, including Stephen Strasburg (on whom I zoom in here to show detail): 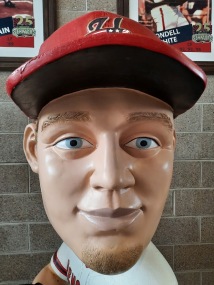 Meanwhile, the game was presented wonderfully. The sound person was on point. I followed along with the walkup music for Erie’s catcher, number 9, Brady Policelli. His first at bat was announced by the opening to the Beatles’ “Revolution #9.”

“Number nine…number nine…” I happen to know that my wife used this exact clip to introduce opponents wearing #9 when she worked for the Tri-City Dust Devils. Next time up: verse two of the theme from The Brady Bunch. Yep: he’s a man named Brady. And his next at bat: “The Dream Police” by Cheap Trick. This person hit the trifecta! I like playing games like that with the music for the opposition: the “why did we pick this song” game. It’s a kick.

The people around us were cool too. Steven ran up to get a snack or chase down the mascot or some such when a foul ball hit the press box, bounced off the arm of a chair on the section next to mine, then rolled, almost to a stop, next to me, where

Steven’s seat would have been. I didn’t have to move: I just bent down to pick the ball up. A woman across the way walked over and said “That’s great–you’ve got one for your kid!” I was glad she noticed: she had no reason to notice Steven was wandering away.

The overall setup of this ballpark was nice: walk-aroundable concourse, tons of people attending (that might have been the bobblehead night), and everyone having a great time even during a 7-0 loss. Double-A ball doesn’t hurt, either. I am wondering if this atmosphere is throughout the Eastern League (oh, excuse me, I mean “Double A Northeast”). If so, I may have to hit every park. Between Altoona, Reading, and Harrisburg, they sure seem to have this whole minor league spectacle-while-respecting-baseball thing figured out.

Charm: 4/5 Cool stuff throughout, and a carnival atmosphere.

Spectacle: 5/5 Packed to the gills with stuff that never interfered with the game. Audio person was really bringing the A game tonight.

Team mascot/name: 3.5/5 Grrrounder. Team name was nice, but Steven reports that he didn’t know how to give a high five. 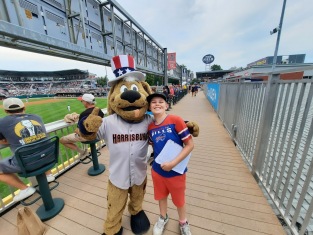 Aesthetics: 1.5/5. The only major complaint I have about this place is that it’s kinda unattractive when viewed from the outside, and kinda antiseptic-looking on the inside. 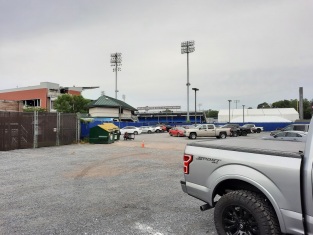 Pavilion area 5/5. Lots of activity and the ability to see the game from almost anywhere.

Scoreability 1.5/5 A pretty severe error with incorrect lineups on the video screen and/or the checking–not corrected until the third inning. It messed up my book a bit.

Beau Briske and Chavez Fernander combine for the shutout.

The only highlight for Harrisburg is Donovan Casey at the bat. He has two hits.