Click on any image to see a full-sized version.

After driving in from Greenville and picking up Rob at the airport, we still had a ways to go to get to SunTrust Park. That’s because the Braves no longer play in Atlanta. They fled the city for the suburbs, leaving perfectly-serviceable Turner Field behind, in 2017. It seems the half-life of a ballpark might now be only 20 years, which bugs me. I also thought about how

freeway in endlessly-terrible Atlanta traffic–outside of town. Seriously: if I lived in Forest Park or Fairburn or some other southern suburb, the move would have made it really undesirable to stay a regular customer.  If I worked downtown and lived in any county besides Cobb, it would add hours to my day to enjoy a team that is a deep part of the fabric of the city (and of many individuals who were removed from reasonably backing the team). I have heard this move associated with other kinds of White Flight from the city to the suburbs. While I won’t make any attempt to get inside 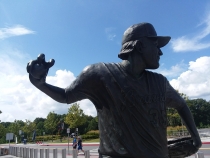 the brains of those who are making these decisions, the pattern sure looks iffy.

I have no real issues with suburbs. I was raised in one. I live in one (no matter how much the good people of Vancouver, Washington might fight that they aren’t). And what I kept coming back to in my experience with SunTrust Park was all of the positives and negatives of suburban life were on display.

where SunTrust sits is one of those manufactured sorts of areas. It’s a created space rather than one that sprung up organically, or even one that sprung up organically around a ballpark. I’m a fan of sports bars and nightlife popping up like they did around LoDo for Coors Field or SoDo for T-Mobile Park. But it feels like here they are attempting to manufacture what happens elsewhere organically. I am in no way an expert in agriculture or city planning, but I can sort of smell that difference. Sure, it was a pretty wonderful area. Rob, Matt and I played Quickword across the street from the ballpark while watching baseball. And I could see this creating a destination.

Outside the ballpark, the Braves had tons of cool statues and exhibits like they had outside of Turner Field (indeed, many of them were simply moved north). There’s Bobby Cox!  There’s Phil Neikro throwing a knuckler!  The ballpark starts to develop a little bit of a destination feel, and I bet for big games and playoffs, it’s a heck of a spot.

Hawkers along the way, also, including the aptly-named Big Ass Fans, which offered free cooling of fans on this hot August evening.

But, for a destination, this felt the nowhereness of the suburbs. The view past the outfield is lovely: lots of skyscrapers and some neon. But where was I? Those suburban office edifices could have been anywhere at all in the US, or possibly other countries. I like my CN Tower in Toronto and my Gateway Arch in St. Louis. I like my prairies in Kansas City and my mountains in Colorado, my rivers in Pittsburgh and Cincinnati and my bay in San Francisco. Here–what was that, exactly?

Inside, the Braves did one fantastic thing right.  The Braves’ Hall of Fame along the concourse was everything it should be. It was set up in a space everyone could go to, and had both cool stuff to look at and even places to stop and go a little deep into an exhibit. I have made fun of the silliness of Sparky Anderson’s shoes in the past, but I spent a good deal of time looking at the knee brace Sid Bream wore when he scored the winning run 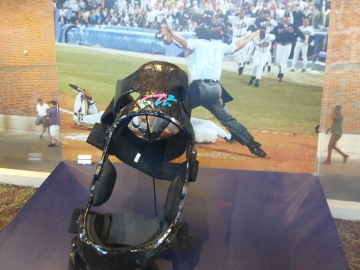 in the 1992 NLCS. That was presented lovingly and appropriately as a part of that iconic moment. In short, the photos and celebrations were right on target. That was a key point where I knew where I was. So was the Waffle House concession.

The place was gleaming and new, and that’s always fun. But it also suffered from some overkill.  SunTrust Park is, to my knowledge, the only ballpark in America with a zip line.  A: why?  B: if you’re going to have a zip line at a ballpark, why have it

tucked back behind the center field batters’ eye? Why not set it up really high, in a spot where one could watch the game while you gained velocity? I would do that.  In fact, I’d try to score the game while zip lining.  That might be a first, in fact.

Matt and Rob and I had a fine time at a good game: the Rockies and Braves were deep into a pennant race, and had hot young stars on the mound (Kyle Freeland and Sean Newcomb).  Fellow Coloradan Matt has held onto his Rockies’ allegiance where I have not, so he cheered hard. It seemed to work, as the Rockies hit the Braves so hard that they wound up using a position player to pitch the ninth–a first for me (but one that was duplicated a few months later by both teams in a Mariners/Angels blowout).

This is a reason to stick around in a blowout by the way. Fans went kind of bonkers rooting for the position player, Charlie Culberson, to get three outs. He did, only giving up one run.  It’s a little like batting practice, except it counts.

So some mixed feelings about this one. Turner Field wasn’t perfect, but at least it was somewhere. This felt like a lovely spot, but it also felt like nowhere.

Kyle Freeland pitches beautifully for the Rockies, giving up only one run and striking out 9 in 6 innings.

Ian Desmond does most of the damage for Colorado, with 5 RBIs that include a bases-loadedd triple to give them a 3-1 lead in the third.

Charlie Culberson gets two outs, but then gives up a double to Charlie Blackmon and a single to D.J. LaMahieu to give up a run and go down 11-2. The Braves plate three meaningless runs in the ninth with four singles and a walk.