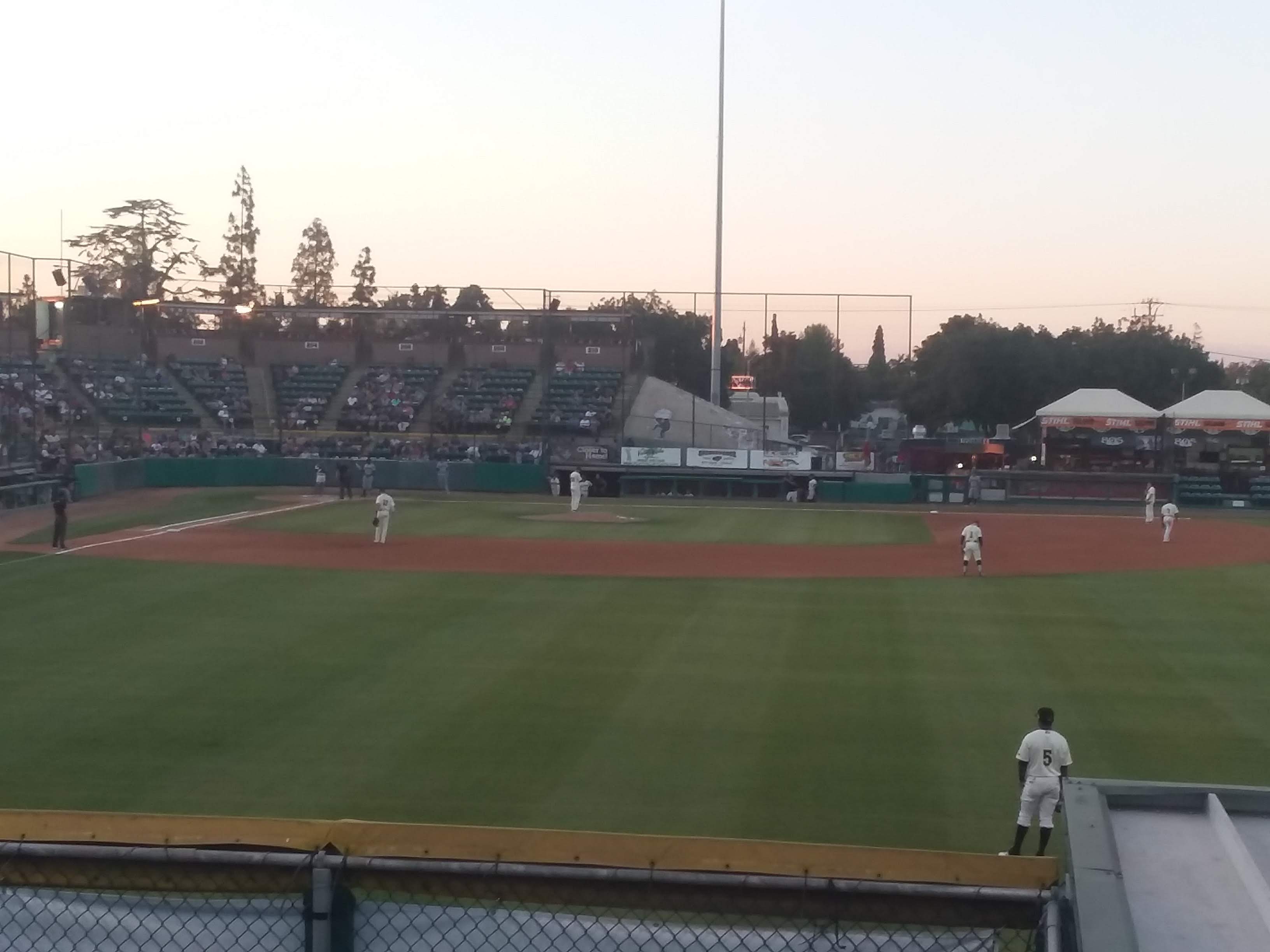 Everything I knew about the Central Valley in California was pretty much what I read in Grapes of Wrath. So our drive in from 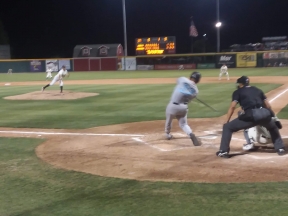 Sequoia National Park that hot afternoon was filled, for me anyway, with images of overloaded jalopies. And it was hot: upper 90s. The town itself didn’t mark me except for those two things.

And so when we got to Recreation Ballpark in Visalia, well, it was in the context of a town that still wasn’t doing much to create an impression. And then the ballpark was in a neighborhood that was not too noticeable.  I usually like ballparks that are sort of embedded into a neighborhood, were one cannot really notice there’s a ballpark around save for the lights.

But there’s no two ways about it: from the exterior, Recreation Ballpark is the most aesthetically unattractive ballpark in the affiliated minors. It is literally a crescent-shaped batch of cement poured onto the ground. It looks a little like there 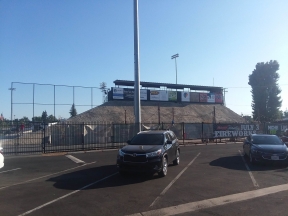 was some huge spill of some sort that they had to make into a thing, and they chose ballpark. I couldn’t walk around the entire park, either on the interior or the exterior, but this is the only place I’ve ever been with so much visible concrete as a key component of its architecture.

On the inside, the ballpark is just fine looking. When I am sitting in the seats so I don’t have to face the cement, I see the beauty of any ballpark, including a barn forming a part of the outfield wall in right-center. That was cool. No view of any sort, but that’s Central California’s problem, not that of the ballpark.

And I can’t complain about the people. The people at Visalia were simply wonderful. The staff greeted us with a “welcome to the 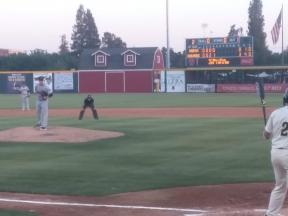 ballpark!” that was the perfect combination of enthusiastic and genuine. This happened multiple times, with pretty much every worker I encountered. I had a delightful conversation with the guy who sold me my mini-bat. Multiple workers and fans noted my Hillsboro Hops gear I wore that day, since Visalia and Hillsboro share a Hops affiliation (I would see several players that day whom I had seen as Hops in earlier years). One fan even asked my wife if one of the players was our son. Two conclusion from that: 1. knowledgeable fans about the minor league system, 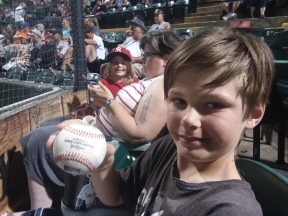 and 2. man, we’re getting old.  That same woman got Steven a ball and offered to have the players she was hosting sign it for them after the game. What a nice woman! And my younger son Aaron had a fabulous time conversing with the kids behind him. I swear Aaron 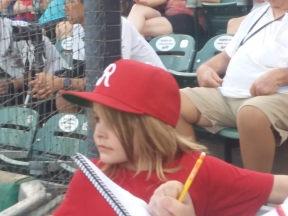 makes it his personal mission to meet and befriend someone at every new ballpark.

But, alas, simple infrastructure interfered. The seats we got were incredibly skinny.  I’m still a relatively skinny dude (well, when I set my mind to it), and it was tough to position myself in these seats. Also, there was something about our front-row place that I noticed:  that the row seemed to angle in to the wall to the point where, at the aisle, six-foot-three me couldn’t sit right.  We tried that for a couple of innings, then moved. 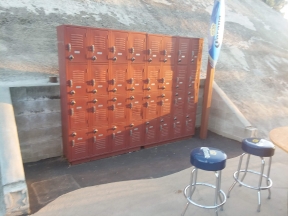 included lockers on the concourse. There they were–high-school-gym style lockers, embedded directly into notches in the cement foundation.  What in the world?  I asked a worker who they were for, and he said they were for season ticket holder. I suppose that I could use one for the teams I am a season-ticket holder for: keep an extra sweatshirt and a backup pencil there; maybe a few granola bars. But the weirdness of it trumped the convenience as I saw it.

The Rawhide did seem pretty desperate to get butts in the seats.  Our game was a Guaranteed Win Night: if the Rawhide won, you’d get a free ticket to the game two weeks later. But, in a bit of marketing genius, a local insurance agent had a promotion insuring against that. If the Rawhide lost, then the insurance agent would give 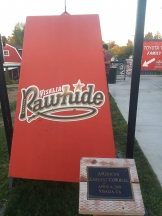 you a free ticket to the game two weeks later.  So you had a guaranteed two-for-the-price-of-one deal at the park.  I also spotted another free-ticket offer: on Thursdays, Party City offers free admission to a Rawhide game if you come dressed in costume for the theme of that night. So, Visalia residents, if these promotions hold, you could buy a ticket to the first Wednesday game of the year and get free admission for every Wednesday for the rest of the year.  And then, if you are willing to dress a little silly, you could get in for free for all the Thursdays as well.  Seems to be a financially good move!

The ballpark does nice with this history. First, they tried to make the most of that damn cement by painting California League history onto it, kind of like 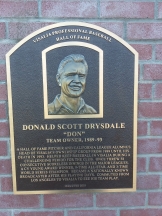 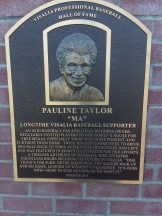 a kid with a broken arm asks friends to sign his cast. It’s nice, but it’s still an injury. I really liked the plaques along the inside, which celebrated Visalia baseball both great and small, with Kirby Puckett (whose number is retired by the Rawhide) sitting alongside a woman who hosted a ton of families and fought hard to keep affiliated ball in Visalia.

So I hope that the excellent people in Visalia don’t take this score too personally. You were fantastic. But a cramped, difficult seat, a desperate vibe, and a seating bowl that Steven said would be a motorcyclist’s dream (to ride up and down) win the day.  I will happily go back to see you all, but I would hope that we could meet in a new place.  This is old, but not the charming kind of old. You deserve better.

Barn was nice, and I like the plaques, but that’s about it.

The people were all quite charming, but the park was simply unattractive and run-down.

Did this well: could have done a little more at this level, and doing so would have foregrounded the fine people. 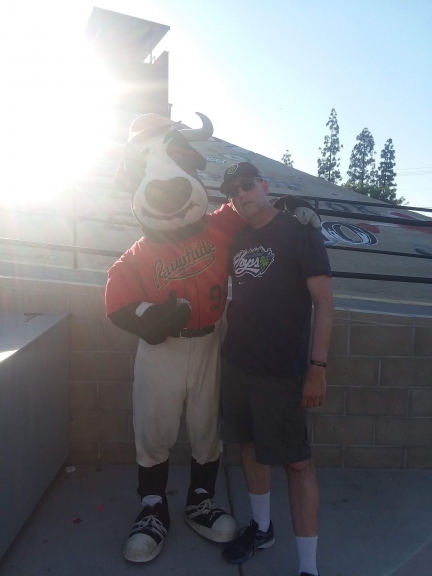 Here is Tipper with me. A great mascot and a very appropriate name.

Would have been a zero were it not for the barn.

Not a lot going on. But there are lockers.

Good on quick scoring decisions, but frequently had the wrong batter listed on the scoreboard.

Had a great time on the whole, but I was physically uncomfortable. This ballpark is the wrong kind of old.