going for Medlar Field in State College–enough to make this an excellent night out at a New York/Penn League game.

The park is unquestionably good-looking and unquestionably Central Pennsylvania.  The beautiful Mount Nittany provides the view beyond center field, and if one looks back past the home plate grandstand, Beaver Stadium stands watch over the scene. Indeed, much like at closer-to-home PK Park in Eugene, the Spikes have a deal with 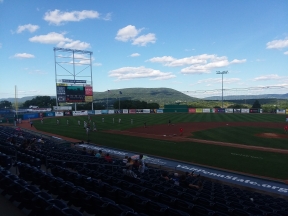 Penn State that shares the ballpark. So there are PSU logos to be had around, and I don’t have much issue with those. And the Penn State Creamery ice cream was worth the wait: I had a helmet sundae. Couldn’t finish it, however.

The Spikes are named not after a railroad, as I thought, but after a young male deer with single spikes as antlers. The mascot, named Spike, is just fine. His handler was a young woman named Jane Doe, 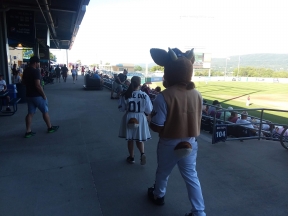 which I found delightful: and she had a tiny deer tail sticking through her skirt, thus indicating she was at least partially related to Spike himself. It’s nice that they found another deer to walk him around: that’s as it should be.

The Spikes did a few things that I wasn’t a fan of. They did tend to view the team a little too much as a promotions-transferrence-device: pimped out a few things between pitches. I was thankful that the strike-out-for-a-free-Big-Mac 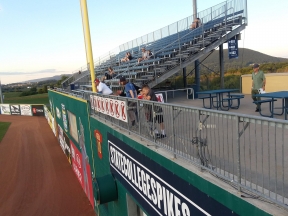 opponent struck out on his first at bat. The PA guy was shouting “BIG” and asking the crowd to respond with “MAC” between every pitch in some fashion. “BIG MAC BIG MAC!”  If that had happened every ninth opposing batter, I’d have had some real issues if Onix Vega had not struck out in the first. Thanks, Onix (and State College pitcher Scott Politz, too) for nipping that in the bud. And some of the pitches sounded weird: desperate even. “If you want to hit a home run or just get back on your feet, call [name of some medical group or other].” What does that even mean?  “I want to hit a home run, but I’ll settle for merely standing, really.”  Weird.

And perhaps the worst moment of the night was during the first pitches.

The Spikes were concurrently running First Responders night with ’90s night.  This led to the following really unfortunate juxtapositioning.

They had a first pitch by the parents of a police officer who had been murdered during his last shift before he left the force. He had plans to get a degree and move on to a second career. The PA announcer was perfect: giving the story its own tragic due. The

parents threw out the pitches, and there was polite, respectful applause.

Then the worst transition ever.

“It’s also ’90s night here at the ballpark, and for our next first pitch…you all remember The Shermanator from the American Pie movie?  Here’s Chris Owen!”

I have no issue with having a respectful First Responders night or a wacky ’90s night. But someone somewhere should have seen that incredibly awkward moment coming. That was a fumble, and it all could have been avoided.

To sum up, they could have turned it down just a tiny bit. 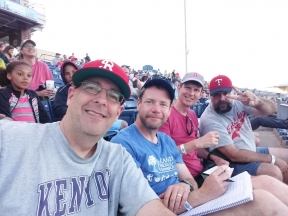 Matt, Rob, and I were joined by Special Guest Ryan at the park that night: Ryan, who is a regular State College Spikes viewer. We sat directly behind the Auburn Doubledays dugout that day, which I always enjoy. Jake Randa, who I took to be a child of Joe Randa since he was born in Kansas City in 1998 (a quick Google search confirms this), was especially chatty and smiley. He’d be the kind of guy I might enjoy playing with.  And there was plenty to celebrate for Auburn too, as they cruised to an easy victory. And we were having bizarre conversations. At one point, somehow, we 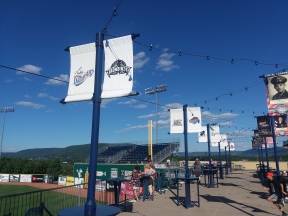 discussed torture (I was probably threatening Matt: he has that effect on people). A quite drunk guy not far from us said: “I hear your conversation. Just so you know, I can break all your knees. That’d be torture.” Um…what?

In any event, it was fun. It was lovely. And it was baseball with my friends. Worth a trip. But Spikes: tone down the promotions just a bit, okay?

Charm: 2.5/5.  There were moments it had a chance, but the marketing kept getting in the way.

Team Mascot/Name: 3/5.  The Spikes and Spike did very little for me, but Jane Doe was fantastic. I liked that they made her into a deer. 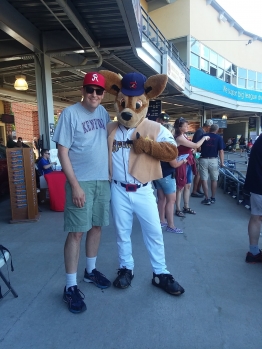 Aesthetics: 2.5/5.  The ballpark itself isn’t that special aesthetically, but has some nice views.

Pavilion area: 2/5.  We couldn’t walk all the way around, either on the inside or the outside. And the cool stuff, like the past Spikes who made the majors, was distant from the field. 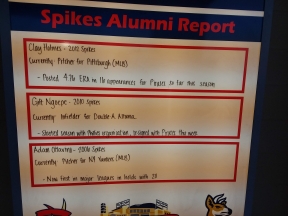 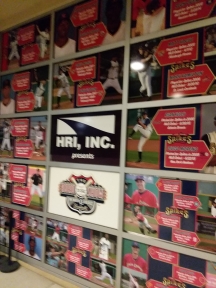 Scoreability: 5/5.  Really great here: whoever was in charge was really on top of it.

Fans: 4.5/5.  This would have been a perfect score because of Ryan, but then drunk guy said he could break all of our knees.

Carlos Soto tripled and scored for the Spikes. 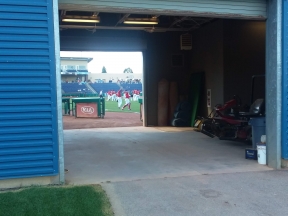