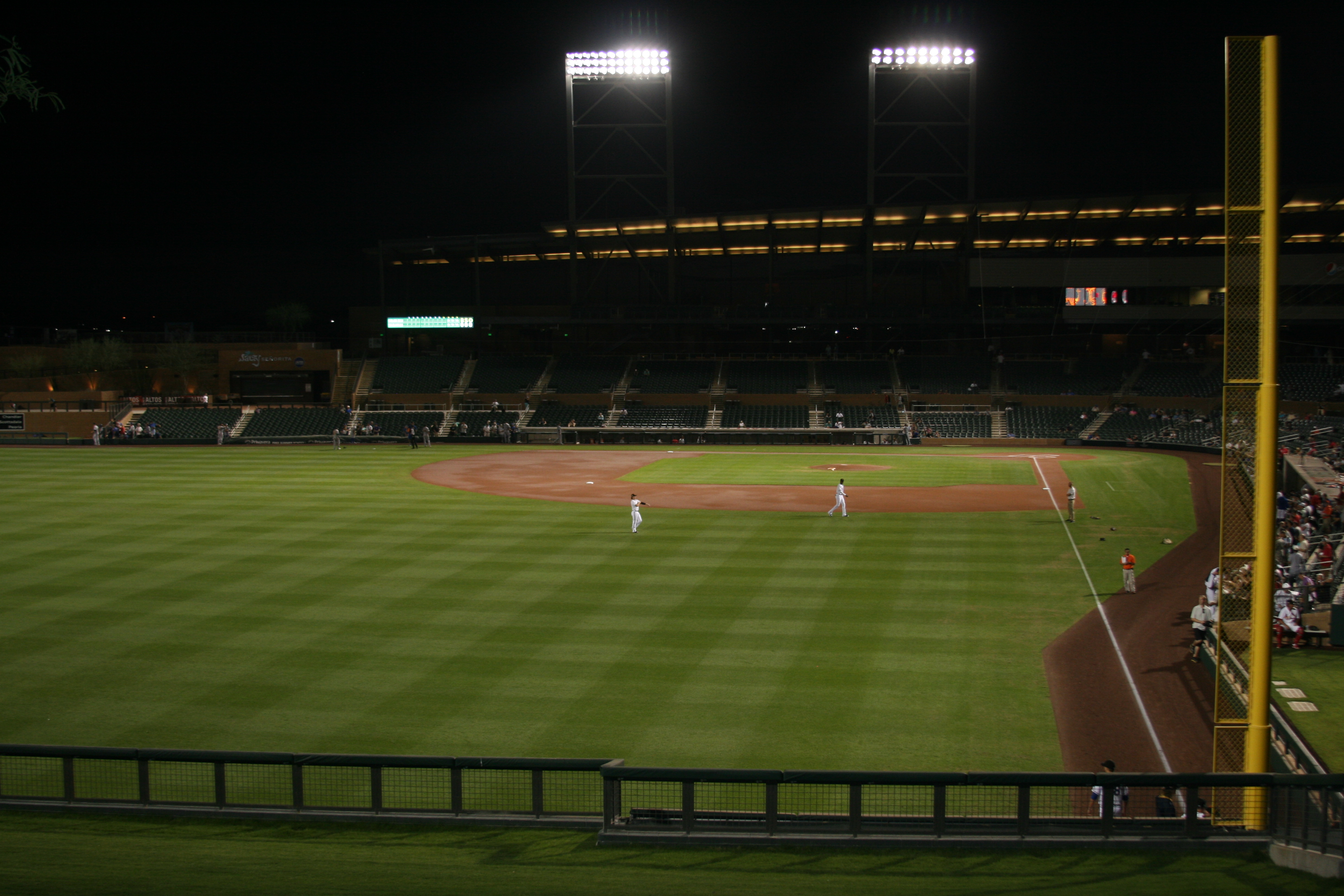 Matt, Rob and I got into Salt River Fields for the second half of a day-night, two-stadium doubleheader, and we got there as a result of the good offices of Brian Moore.  Brian is, quite simply, the most hard-core baseball park guy I have ever known.  I met him originally at a game in Everett sometime around 2003, when he was running out of US ballparks to attend. 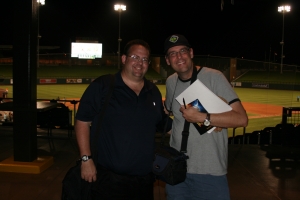 Let me say that again: he was running out of US ballparks to attend.  At the risk of telling Brian’s stories for him, he got hooked up with the international baseball community as a scorer, and has switched his ballpark travels to focus on the international: he has now attended baseball games in more countries than I have set foot in. Why he doesn’t have a ballpark telling his stories of global baseball travels is beyond me, and I am jealous of his travels.

Anyhoo, Brian, a San Diegan, got us hooked up with tickets to this game, and I got to talk to him and his dad for a while. He, like me, is attracted to the low-frills quality of the league which I had discovered earlier that day in Scottsdale.  So we got to settle in for a gorgeous desert night of baseball.

Unlike the aforementioned Scottsdale, Talking Stick is a recently created palace for Spring Training and pretty shiny and glitzy. The Rockies and Diamondbacks share the facility, and it’s easy to see the appeal: tons of up-to-date facilities 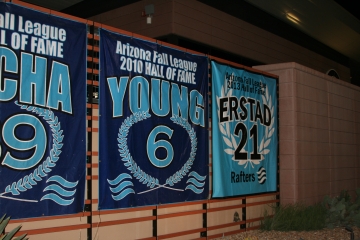 surround the ballpark, and one can look over at them as one circumnavigates the field.  The lovely grass berms in the outfield are broken up by a few locally-appropriate bits of cactus. I was most impressed by the honoring of Arizona Fall League graduates who had played there and elsewhere: it’s exciting to take a look at the as-yet-anonymous-to-me ballplayers on the field and wonder who might be the next Michael Young or Darin Erstad.  Again, cross-apply my entire love letter to the Arizona Fall League I gave in my Scottsdale review.  It was all about the baseball, no more, no less.  And I really was into that.

So this ballpark might actually score a tad lower on the score than Scottsdale, just because the newness and glitziness (to my mind anyway) comes at the expense of charm.  And, because of the primary purpose of this place (Spring Training games), it’s also a little big to my tastes.  I’ve never been to a Spring Training game, and while I might enjoy it, it’s not that appealing to me.  Too many dudes to keep track of, too many fans, too 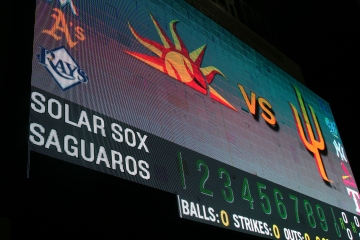 much money (or so I am reading).  So, while impossible, I might prefer the ballpark house only half of the people in it.

For whatever it is worth, we did return for something they called the Bowman Hitting Challenge, won by an affable Miami Marlin project named Austin Dean. For what it’s worth, the number one appeal of the league–which is that they don’t really have any interest in fan experience, they just want to play ball–became a weakness for a made-for-fan event like the Hitting Challenge.  I missed out on some autograph opportunities because of some disorganization, lack of time, and generalized lack of interest.  The contest itself had some low-tech appeal (a batter could get points for smacking a guy running around the outfield with an advertising sign, for instance), but when it rained, we decided it wasn’t worth waiting out the delay and headed for pizza and drinks instead.

In any event, this place was modern, beautiful, and antiseptic.  And that didn’t matter much to me because it was the Arizona Fall League.

A little like the lobby of a chain hotel: nice, but where are we?  It’s a creation rather than embedded within its environment.

Charm: 2.5/5
See above. Too perfect and cutting-edge to be charming.

Spectacle: 4/5
Perfect for the Arizona Fall League (which is to say no spectacle)

Team mascot/name: 3.5/5
No mascot, which is great (see “Spectacle” above).  I am of mixed feelings on “Saguaros” as a name.  Locally appropriate, kinda majestic, but not really intimidating.  I’ll go above average.

Pavilion area: 4/5
They got this right: it’s easy to see the field from all parts of the concourse.

Scoreability: 3.5/5
I don’t remember any problems.

Intangibles 5/5:
I think all Arizona Fall League parks will get the max score here.

Cardinal-to-be Alex Reyes gets a plurality of the outs in a 5-hit shutout.