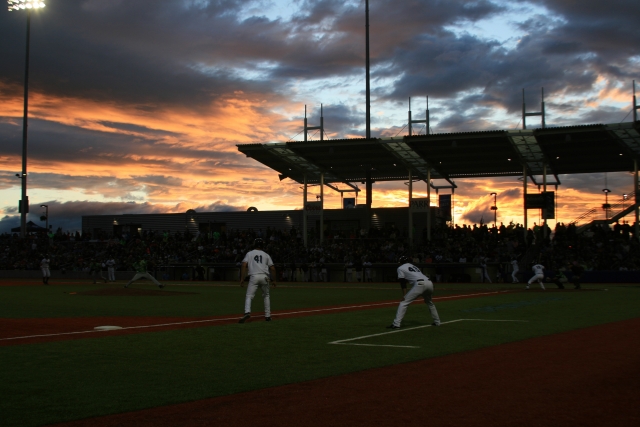 Click on any image to see a larger version.

I went three years without baseball anywhere close to where I live.  Three.  Long.  Years.  When the AAA Portland Beavers bolted town in order to allow the charming, perfectly-serviceable PGE Park to be made into a soccer-only facility and

rechristened Jeld-Wen Field, the closest professional baseball to my Vancouver, Washington home was the Salem-Keizer Volcanoes, who play in lamentable, ugly surroundings and are an hour drive without traffic (which isn’t often).  But I knew the Portland market would not stay empty—it was the largest market in the US without professional baseball, and someone had to figure out a way to make a stadium to make some money out of that vacuum.

For a short while, it looked like that would be Vancouver, as the Yakima Bears Northwest League team looked for an upgrade from Yakima County Stadium.  A good plan for a gorgeous stadium within walking distance of my house came into being.  The Bears would pay a good chunk of the 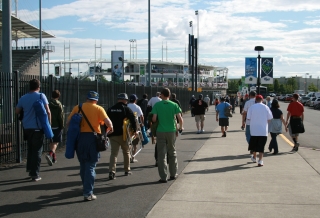 money, but wanted taxpayers to foot some of the bill—and (in what I liked most) the county would own the stadium, with the minor league team leasing the ballpark for their 38 days a year.  I walked the site of the potential ballpark with my wife, and we anticipated being regulars there.  Alas, the never-tax-me-for-any-reason-whatever crowd won the day.  Hillsboro, Oregon, a suburb west of Portland, pounced, and as a result they became my “home” minor league team, about a half hour drive away (in good traffic).

The result is Hillsboro Hops Stadium, and I like most of what they’ve done with the place.  The ballpark is the center of a high school sports complex, right next door to the football

stadium.  The designers did a fabulous job of integrating the colors and designs of the football stadium right into the baseball stadium.  The bleachers for the football stadium actually form a canopy above the pavilion down the left field line: a welcome feature in the event Oregon gets a little rain.  The concession stands for the football stadium double as concession stands for the baseball stadium.  It was a smart little maneuver, and it leads to a nice, integrated experience.  The field is surrounded by active softball fields–if a spectator goes up to the concourse and cranes a neck in nearly any direction, he or she can watch a coed slow-pitch game in progress.  Then, to get back to the car (quite a hike, by the way), one walks past several softball games into the night.  I like that.

Alas, there are negatives with any positives, and the artificial turf on the field are the negative.  Since the ballpark will be used by high

schools during the 327 days a year the Hops are not around, they wanted a resilient surface, and the ground-up tires therefore made a lot of sense.  While I’d have made the same decision myself, what is gained in utility is lost in attractiveness.  With the exception of the

pitcher’s mound and the area around home plate, the infield “dirt” is simply the same rubber turf as the outfield, only painted reddish-tan.  It’s a bit off-putting, and I wish there were another way.

Opening night was a nice, cathartic experience for me.  I was pleased to see that the Hops understood the importance of the night to those of us who would care to show up for it.  They had several nice touches:  a display honoring the Portland Beavers, for instance (including lineup cards for their final game: a rare case where I saw a display for a game that I was actually present for).  Local kid baseball players had dug up home plate at

PGE Park after the final game, and they returned with the same home plate at Hillsboro, actually running it around the bases to put it into the ground and be used in Hops Stadium.  The team hired Rich Burk, the very able radio announcer for the Beavers, for the same job with the Hops, and he donned a tux to do all the pregame duties.

Once the game got going, it appeared that the Hops could have used a little more rehearsal.  The scoreboard had a few problems:  for starters, they could have figured out how to do better than the 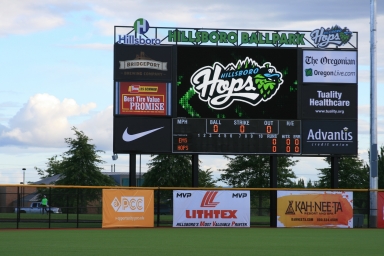 generic “Hops” and “Guest” on the scoreboard.  Also, at least twice as the Hops crushed the Emeralds 12-0, the scoreboard operator put up an incorrect number of runs in a half inning.  The only way he/she could fix it was to reset the entire linescore and put in all the numbers yet again, even running through the outs.  It was rather funny to watch.  Also, the PA system was far too loud.  (To be fair, many of these were fixed by the time I attended the team’s third home game two nights later.)

But I still am glad this is my home park because there’s a lot right with it.  The game can be seen from nearly anywhere on the concourse.  The history of Portland baseball is very much on display and

valued.  There is an honoring of veterans from all branches of the service at every game (who cares if they called it “a Hillsboro Stadium tradition” at the very first game…if it hasn’t happened yet, it’s not a tradition, right?).  And, as if to reward all of us for our patience in waiting for a baseball team to return, the inaugural game featured a full double-rainbow past the left field foul pole and a fantastic sunset past first base.

It’s possible my perspectives on my home ballpark will change over the course of the chunk of games I’ll attend per year for the forseeable future, but my first impression is that the team mostly got it right.  They’re local, unashamed of being in the low level minors, and unashamed of being small.  That’s enough for me to overlook the negatives of the ballpark and look forward to quite a few games here over the years.

The celebration of Oregon baseball makes a big impact here–looking back at the Beavers and tying it all together with past teams.  Plus lucking into a rainbow on opening night spoke to me.

I like the nestling next to the high school stadium, being surrounded by local softball leagues, and there’s plenty to like here architecturally.  But oh, oh, oh…that turf.

Lots going on between innings, but no interference with the game.  Marvelous.  Even if, on the very first day the park opened, they mentioned a “Hillsboro Hops Stadium Tradition.”  I only wish they’d said “We started this tradition at the beginning of this sentence, and have done it ever since.”

Barley the Hop is the mascot.  I like the idea of a kid high-fiving the main component in beer.  The name “Hops” may have been a little bit of a slap in the face to the team’s predecessors in Yakima, where they grow a lot more hops than near Hillsboro, but what the hell.

Would be 5 without the turf, but hey.

Quite nice.  Tough to watch the game from the outfield, however. (But possible to watch nearby softball games if you get bored with the Hops.)

This may improve eventually, but the first two games I attended were really weak in this area.  The scoreboard operator would make really basic errors (like the number of outs in an inning), and I could see the umpire demonstratively displaying outs to counteract the incorrect scoreboard.  In fact, we in the stands started signalling outs to each other as if we were players on the field.  (“Two down, everybody!  Two down!  Play is at first!”)

All that pent-up baseball love came out nicely.  I was glad to be a part of it.

Pleased for this to be my home ballpark.

The debut game was a blowout for the Hops.  Jordan Parr hit the first home run in ballpark history while young Jose Martinez led four pitchers to a three-hit shutout.

I “see” my first inside-the-park-home-run ever here in July of 2013.  I say “see” because I lost the ball in the sun.  When I heard no response around me, I assumed a foul ball, and was then confused to look up from my nachos and see the runner crossing home plate.  It turns out the the Hops’ left fielder, Yogey Perez-Ramos, also lost the ball in the sun. It landed about 50 feet behind him near the left-field foul pole.  By the time center fielder Brian Billigen got to it, Everett’s Jack Reinheimer was crossing home plate.  Not a lot of excitement in the ballpark: mostly confusion (I had to check the news accounts to figure out exactly how that happened and how I missed it).

Both the 2014 and 2015 Hops won the Northwest League, and I had the pleasure of watching the clincher of the South Division series over Boise in 2014. I liked how businesslike the team was about it–they weren’t done. An already-scheduled trip took me away for the Northwest League Championship series that same week, but it was still a pleasure to watch.

In 2019, the Hops feature a stud 18-year-old ballplayer named Kristian Robinson. It felt like he hit a home run, drew a walk, and stole a base every time I saw him. He is the first non-pitcher I have seen at the short-season level where I could say “damn, that guy’s gonna make it.”  So here in 2019, I am making the call. Kristian Robinson is going to make it.

In 2021, the Vancouver Canadians called Ron Tonkin Field home because of the difficulty of international travel as we pulled out of COVID that year. I headed to my first of those games and loved it. No ads. Not much between innings. A few cardboard cutouts behind the Canadians’ dugout, but not many actual bodies there. Loved it! Also, Everett AquaSox right fielder Zach Deloach tossed my son Aaron a ball. And a great game to boot: Luis de los Santos has a walk-off sac fly in a 2-1 win for Vancouver, the “home” team.

First-round Mariners pick Emerson Hancock picks up his first professional win, striking out 8 in 5 innings in a 12-4 win over “home” Vancouver in June 2021.

Adam Kloffenstein of the Indians gets the win for Vancouver against Spokane. I had a great time chatting with Adam’s mom for some of the game, so I was rooting for the dude.