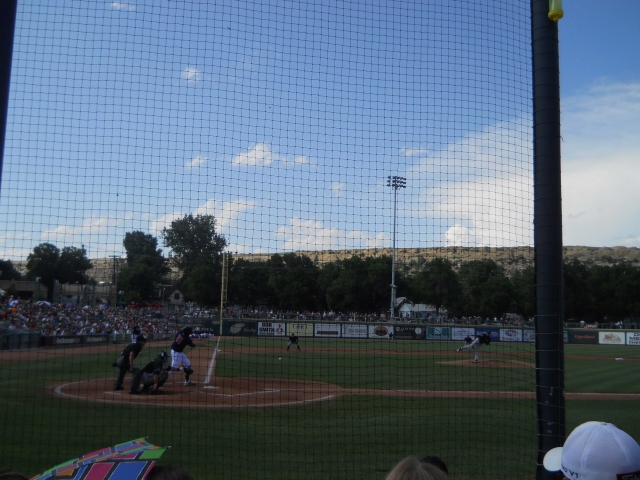 arrived at Billings with family in tow.  There, I found an absolute jewel of a ballpark nestled against the Rocky Mountains.

Dehler Park passes the main test I have for all ballparks: the is-there-any-question-where-you-are test.  The instant one walks through the home-plate gate, one is faced by what Wikipedia tells me is the “Rimrocks,” a 500-800 foot cliff that skirts Billings’ north and east sides.  It’s a flat-out gorgeous view that occupies my mind during slow points in the baseball.

On top of that, Billings does incredibly well with its baseball history.  The Mustangs’ 40-year affiliation with the Reds certainly helps.  Dehler Park seemed to focus a bit more on recent Mustangs 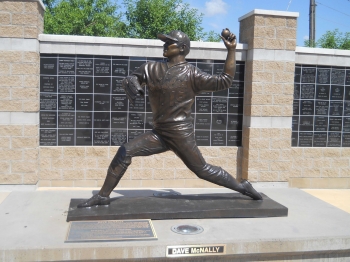 than more distant ones (I saw huge tributes to Jay Bruce and Joey Votto prominently displayed), but not exclusively: the program celebrated more distant history.  Dave McNally’s statue greets fans as they enter the stadium, and the plaque lists his accomplishments as a Billings Little Leaguer more prominently than his Major League exploits.  I like that.  There is also significant love for Ed Bayne, a legendary local American Legion coach from the middle of the 20th century.  I love that these two locals are treated as practically equals, and that my 4-year-old could literally shake hands with the Bayne photo (Bayne also gets a good deal of love in the Billings American Legion Hall of Fame inside the 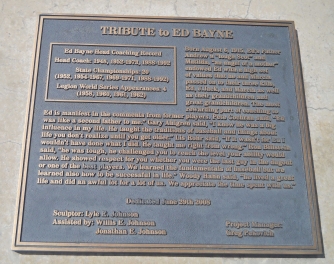 Lineups were prominently displayed, which came in handy for Steven as he wrote down the lineups before the game (this always gets looks).  More importantly, Billings has what I most like at any level of ballpark: the ability to circumnavigate the park without ever surrendering the view of the field.  Some locally appropriate fare was available (but no thank you to Rocky Mountain oysters, okay?), and those mountains…oh, yes, 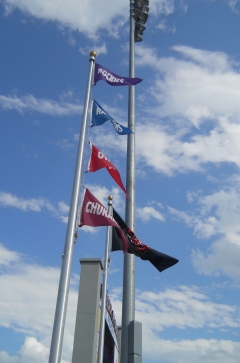 those mountains.  I liked how the ballpark kept standings for the Pioneer League on a flagpole in center field, much like at Wrigley Field or (horizontally) at Safeco Field.  Keeping an eye on your own league and taking pride/focus in the minors, rather than just the majors, scores points for me.  And the concourse was popular on this particular afternoon.  Some of this was that people were gathering back by the concession stands’ edifices to get a little shade.  My wife remarked, however, that people past the left-field wall were awfully good-looking to be gathered in one place: that the Mustangs seemed to have created a pretty cool place for beautiful people to gather for a holiday.

I think this might be related to my very small quibble with the park: it was run a little too slickly for my 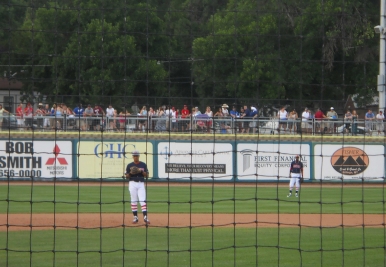 tastes, at least in the very-low minors.  There were no on-field promotions that I recall, and everything in the design was out of central casting for the gleaming-new-minor-league-ballpark-of-the-early-21st-century that has popped up everywhere.  I’d like for them to let their hair down a little—a little—and allow

themselves to celebrate a little wackiness every now and then.  I wondered a little bit whether Billings’ status as the largest city in Montana required them to show a little more reserve than their competitors in Helena, Great Falls, and Missoula.  And make no mistake: anything (including an anesthetic-free root canal) is preferable to the abomination of volume and horror that was Missoula.  But I feel like the Mustangs were reserved to the precipice of stuffiness.  I would like to see them embrace just a little more of a low-minors “what the hell” attitude.

But this is a quibble.  If I could make all 38 games here every year, I certainly would.  As it is, I will have it on the short list of ballparks to return to if ever I’m zipping across I-90.  You should have it there as well.

Total home run here.  The Mustangs celebrate Montana baseball history unabashedly and enthusicastically.  They look back on the history of their team with passion.  And man oh man, but that view of the Rimrocks is fabulous.

Gorgeous, but a little too slick for a perfect score.

I remember no promotions.  In a way, I like that, but in a way, I miss it. 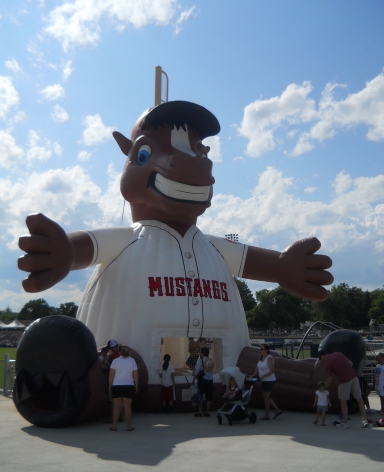 Couldn’t find Homer in the crowd, but here he is anthropomorphized into a bouncy-house.  I don’t mind the Mustangs name, but Homer would be the #1 Mascot name on Family Feud, so I can’t go too high here.  That and, again, I didn’t see him.

Gorgeous inside and out.

Plenty to walk to, and around, and all without losing sight of the field.

Granted, it was July 4th, but even with that, I thought there was a tad too much casualness for my tastes

A great, if rather hot, afternoon.  I will be back.

Ty Washington’s second-inning triple gave the Mustangs the lead they wouldn’t give up.

Jose Guzman pitched 5 1/3 shutout innings, followed by 1 2/3 of perfection by Scott Brattvet (including two strikeouts and a double-play).