Maybe I was tired as I approached Great Falls:  it was the last in a three-games-in-three-nights-in-three-cities stretch.  While my family (my sons were 4 and 2 at the time) were game and had good attitudes, I think we were looking past this game to the sitting-down-and-doing-nothing-in-Glacier-Park 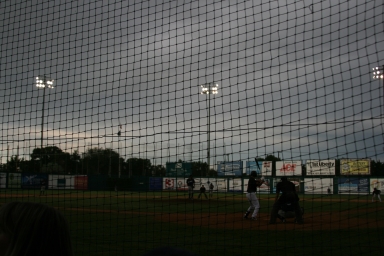 that followed.  But Centene Stadium left me very little to like about it: it lacked both old-time charm and modern amenities.  It was unattractive and an overall unfortunate place to see a game.

When I saw the ballpark on a map, I was intrigued.  It looked like it abutted the Missouri River, and as I drove to the park and saw how we were at the top of a significant canyon, I thought there was promise for some views.  But alas, the park is constructed in a manner that has literally no views from anywhere.  You’re inside a fortress with four tall walls, and all that’s available is the stadium itself, which, alas, is hardly physically attractive.

There were some sweet moments that will cause my memory of Centene Stadium to be positive overall.  We were greeted by a sweet 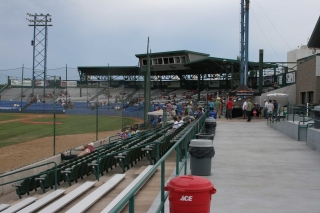 girl who I’d bet money was a prominent member 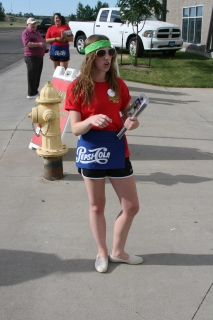 of her high school’s drama club.  She sold me my program, and then told us that we got a free song with the program.  That’s a pretty good deal.  But when she offered to sing the Oscar Meyer Weiner song (since it was 50 cent hot dog day), I declined and instead asked her to sing “Bingo,” since my 2-year-old was a big fan of it.  I was a little surprised she needed help remembering the words.  Seriously:  A farmer.  Had a dog.  The name is given in the title.  The spelling isn’t tough.  But she did sing it and my toddler enjoyed it, and I am thankful for that.

Both of my kids were then treated nicely in a trip to the dugout, where catcher Zach Miller and especially shortstop Tyler Shryock signed 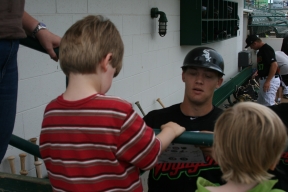 my kids’ scorebooks and spent some quality

time talking to the kids.  (Shryock had three hits and two RBIs. Happy to bring my kids back as good luck charms, Tyler.)  Fist bumps, asking my kids if they were going to play baseball…and the like.  That made me feel good.

Although Centene Stadium mostly fails the do-you-have-any-idea-where-you-are-in-the-US test (since we can’t see mountains or river or even buildings from the inside of the ballpark), there are a couple of areas where they do well.  I was interested to see how the team handled 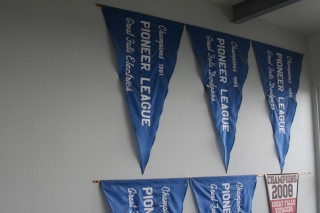 its rich history: nearly 20 years as a Dodgers affiliate, with nearly 20 years as a Giants affiliate before that.  The history was there if one was willing to look for it.  There were some old pennants honoring teams going back nearly a century near the entryway, and a brick baseball field made with donations from, if I recall correctly, the Great Falls Dodgers Booster Club.  (Steven enjoyed running around that diamond, occasionally to the cheers of affable 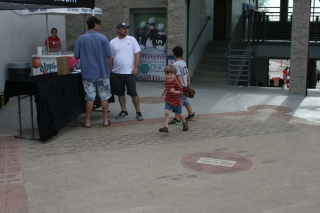 locals.)  But beyond that, there was little.  The Voyagers name felt bizarrely out of place.  It would work if there were a Lewis and Clark theme—indeed, would work especially well in the Pioneer League.  But space travel?  What in the heck does space travel have to do with Montana, or vice versa?  The mascot, Orbit, is also therefore out of place.

Game presentation also left much to be desired: the game was viewed primarily as a promotions transference device rather than a baseball game.  It was an interesting contrast to Billings the night before, where I felt they might not have done enough: here, we were worried about the ballpark going to the excesses of Missoula, which remains (alongside San Jose) one of the most unpleasant nights of baseball in my life.  When the Voyagers had baserunners, the “ducks on the pond” were sponsored by AFLAC, and some fans busted out their duck calls.  Pretty weak tie-in, and results in too-frequent annoying sounds.  At another point, there was a request over the PA:  “Grounds crew, can we have the lights please?…[pause]…This request was brought to you by Suchandsuch Electric…”  Really?  Also, rather than just announcing names, the PA guy went overboard, shouting 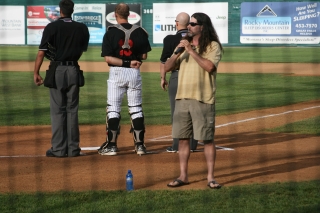 “All right!” and “Nice hit!” and other vapid statements. The cheerleader PA guy is another of my pet peeves.  Do the Voyagers really believe their fans are so stupid as to need to be told this?

When all was said and done, the promotions seemed to ease up a little as the game went on, so we were still able to get in a nice night of baseball—the game operations didn’t

totally trip over their own feet.  But I would still like to see the whole experience toned down just a notch.  Maybe this will take place if the Voyagers ever leave this ugly spot.

It’s funny: there are old ballparks in the minor leagues that I enjoy for their oldness.  In some ways, I miss Eugene’s old Civic Stadium, and when the Brewers leave Helena (as seems inevitable) for some gleaming new ballpark by a river somewhere, that will be a loss as well as a gain.  But Centene felt like it gave all of the negatives of an old ballpark with none of the positives.  I believe the team and its fans could do far better. 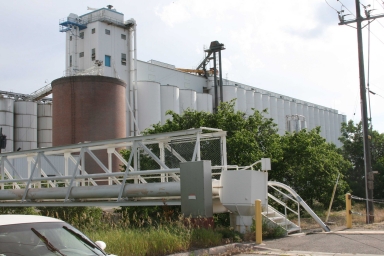 That’s the General Mills factory next door to the ballpark.  Normally, this would be a strong advantage in the is-there-any-question-where-you-are test. However, when in the ballpark, it is literally impossible to see outside of it: no mountains, no river, no factory…no Montana at all.  The sense of Montana baseball history in the ballpark is nice, and saves this from an even lower score.

The ballpark has aged without gaining charm.

Promotions were about right, but too much yelling and cheerleading for my tastes.

The name does not seem to have anything to do with Montana, and the mascot and name feel forced.

Again, perhaps I’m unfairly comparing to the beautiful Billings ballpark I saw 24 hours earlier, but Centene Stadium offered nothing pretty to look at.

Much of the area was underground and charmless: only a little bit was upstairs in the sunshine.

Fine job here: my 4-year-old and I were able to keep up.

Very nice people who were smiling at my children at every opportunity.  Thanks, Great Falls.  Minor deduction for cheerleader-ness.

I’m afraid that, on the whole, the ballpark did nothing for me.

Jacob Morris had the big highlight of the night, with a 6th-inning grand slam that put the game out of reach.

Jose Bautista (no, the other one) pitched well to get the win.