After two nights of gorgeous Utah ballparks, Melaleuca Field in Idaho Falls was a bit of a letdown.  With no real views worth mentioning and a non-descript residential 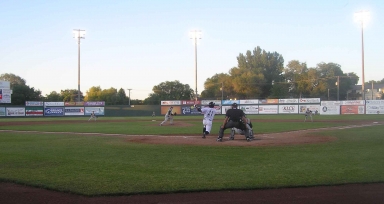 neighborhood surrounding it, there was really nothing that spoke to the fact that we were in Idaho–when sitting in the stands, wecould have been anywhere from Maine to Hawaii.  Nonetheless, the Chukars put on a nice little show, and it’s always fun to be in a small ballpark that affords easy access to players and makes me feel like I’m right in the middle of the game.  That, combined with a good game, made for a memorable and fun night at the ballpark.

There’s not a whole lot going on around the ballpark, which is 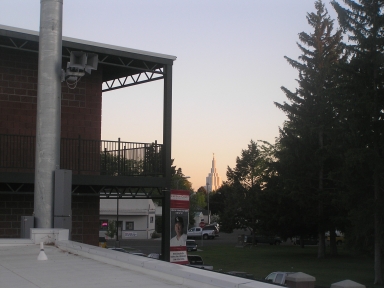 several blocks east of the Snake River and nowhere near the center of town.  One can look out and get a view of the playground across the street, or–for the only hope of local color one can get in the ballpark–crane one’s neck to find an LDS temple far off in the distance behind home plate.  The team tries to make up for it by putting in local touches inside the ballpark, including pennants celebrating past Idaho Falls players who have made it big, a list of all Idaho Falls players who went on to the majors, a couple of locally-appropriate retired numbers alongside Jackie Robinson’s, and a little exhibit on Idaho Falls baseball history, as well as a plaque honoring Edwin McDermott, who was instrumental in keeping affiliated baseball in Idaho Falls (and for whom the former ballpark which stood on this site was named).  So, while the ballpark could use a little more pizazz for a place that was only built 4 seasons ago, it does 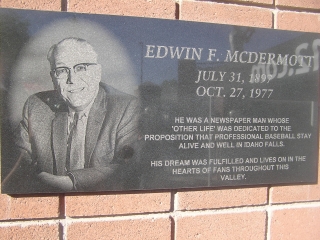 just enough to convince me that they’re trying.

It helped that the sound guy was legitimately funny and clever.  I wouldn’t have thought to play “Ghostbusters” during the introduction to the game against the Casper Ghosts, but the sound guy did.  Additionally, playing Chuck Berry’s “Kansas City” as the Chukars ran out to their position was a nice touch for a Royals affiliate.  I’m not a fan of pretending that we ARE in the parent club’s hometown–as with the Yankees’ affiliates who play “New York, New York” or with Ogden, who introduces itself as “the home of the Los Angeles Dodgers,” but the Chuck Berry song indicates that the players are going to Kansas City, and has an innocence and optimism that I associate with low-level ballplayers chasing the dream.  Plus, I hear that Kansas City has some crazy little 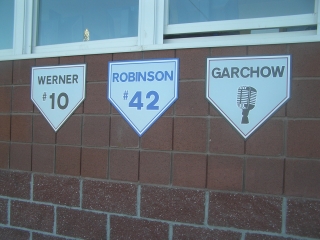 women there, and the players each plan to get them one.

Not quite as subtle or clever was the PA guy.  While his sins were not as strong as those of the guys on my shit list in Detroit and Missoula, he came close.  While I won’t be able to duplicate his tone here, he did the nearly-orgasmic squeak to introduce Chukars players, which, while I’m not a fan of it, I hear often enough to dial out.  But, strangely, when the Ghosts sent a player to bat, the PA guy decided to do the opposite.  He didn’t merely deadpan the names, like most PA guys do.  He decided to take it a step further and tried to sound actively bored.  Yeah, I know that “actively bored” is a bit of an oxymoron, but you need to hear this lame-o do his thing.  Think someone at the DMV going over a missed test question for the 50th time that 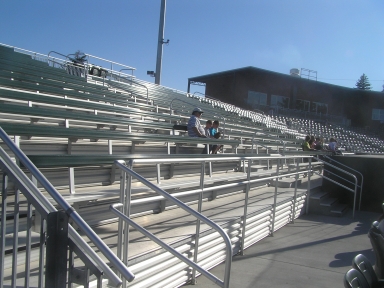 day.  Now, think of that DMV worker on barbiturates.  That’s the closest I can come to duplicating this guys “bored” voice.  My question…why?  Are you actually encouraging your audience to be bored?  Or do you think your audience so stupid that they need to be told that these are not the guys we’re rooting for?  He was the fodder for some jokes around us, and not just from me.

The seating was a little bit strange in Melaleuca Field.  It wasn’t just that the entire seating structure appeared to be made of aluminum (not the most aesthetically pleasing arrangement).  It was that seat one and seat two in the same row weren’t  next to each other.  The number of 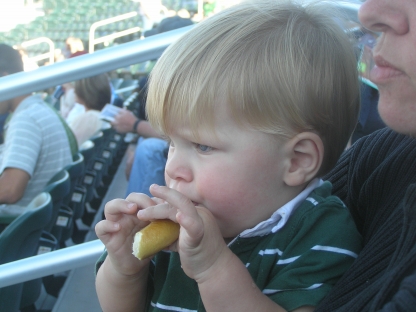 seats in the row didn’t quite match the amount of space that particular section had before the concourse angled.  So Michelle and I, while we were angled in a little bit towards each other, were about two or three feet apart.  This turned out to be for the better, since it gave us a spot to set down our surprising amount of stuff we brought (between scorebooks, mini-bats, cooler-weather clothing, and baby-related material, we probably led the Pioneer League in the stat of Crap Carried Into The Ballpark).  But if this had been a first date, I’d have been disappointed.  Private conversation was difficult, and hand-holding or snuggling out of the question.  I bought the tickets on-line, and the computer listed us as “together,” but I’d consider a call to the team to confirm if at all possible if you want to be next to your companions.

Companionship was not a problem for the guy in front of us, who my wife 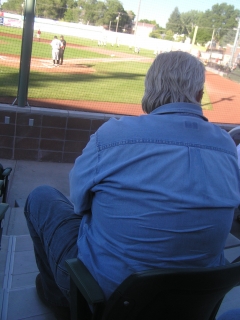 declared “grumpy.”  It became clear that this man wasn’t thrilled with Steven’s presence, even though he was behaving pretty well–he wasn’t making much noise, and his wriggling was entirely on Michelle and rippling over to the general public.  But his body language betrayed a distaste for kids in general.  He eventually struck up a conversation with the guy next to him, and said that he was traveling around the West on his motorcycle, going to baseball games.  He said he’d be at Helena the next night.  I figured, hey, here’s a chance to get friendly with a fellow ballpark traveler!  I said we’d be in Helena tomorrow too!  “See you there, or maybe on I-15 tomorrow!”  He said “I would NEVER take the interstate.”  Yeah, I get that, but please.  What a dork.  He’s the first ballpark traveler I’ve ever encountered who didn’t want to talk about either ballparks or travel.

Steven was a little too squirrely for a little too long on my wife’s lap, so she asked that I take him for a while.  I took him around the concourse, 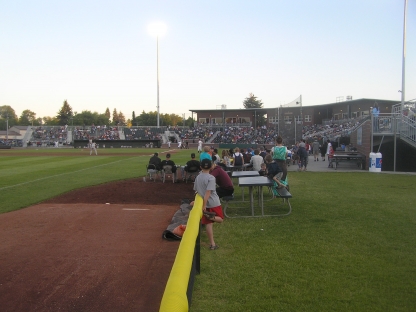 where many, many people  complimented Steven for being good-looking (yeah, he is).  Then, I walked Steven up to the top of the bleachers, where he could run back and forth without disturbing anyone’s view.  He did that for a while.  He then decided what he really wanted to do was clamber up and down the stairs, which was less acceptable, so I herded him into a trip down the left field line.  There, I found the Casper Ghosts’ bullpen, and I found the relief pitchers for Casper watching the game closely.  I hoisted Steven onto the top of the 3-foot fence, said “Here, Steven!  You can say hi to the Casper Ghosts’ bullpen!” and figured I’d get a smirk or two before the ballplayers started focusing on the game.

It turned out that the ballplayers were happy to get a distraction.  One Kenneth Roberts (left) said hello to my son and offered his hand for a handshake.  Steven didn’t yet do handshakes, but he would willingly dish out high fives, and he did so once I told Mr. Roberts that fact.  Taylor Reid (right), another pitcher, then asked Steven if he was going to be a baseball player.  Steven’s 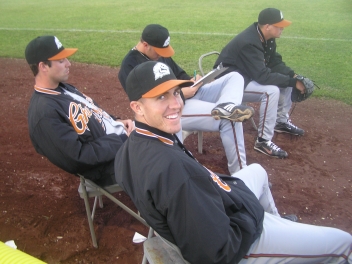 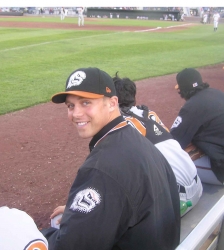 of a couple score of words wouldn’t answer that sufficiently, so I answered for him:  “Only if he’s a way better athlete than his dad.”  I was surprised and a little bit touched that these guys would be nice to my son like that.  They certainly didn’t have to, and they had other things to do.  So, hooray to the Casper Ghosts’ bullpen, who created a great memory for me (and for Steven, if he develops long-term memory much sooner than is developmentally common).

The game turned into a pretty good extra-inning affair, and all three of us hung in there until the end.  And while the ballpark itself wasn’t anything to write home about, it turned out to be an enjoyable, memorable night.

Even with the nice Idaho baseball history on the inside, this is a pretty non-descript place.  I can’t tell where I am in the USA during the game.

Some nice moments, but cheerleader PA annoyed me a bit.

Spectacle:  3/5
Could be a little more for Rookie ball, but there was a little, and the sound effects guy was actually funny (without interfering). 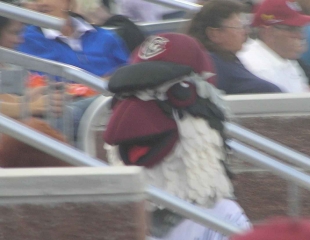 Charlie the Chukar is a furball.  I had to look up what a Chukar was.  Hardly intimidating, but locally appropriate.

Pavilion: 2/5
Not much in the way of places to watch the game while wandering.

Missed a couple of pitching changes.

Intangibles: 4/5
A fun night where my son got a high-five.  Also a good, interesting game.

Casper jumps out to a 5-0 lead in the fourth, with the big blow a triple by Robert de la Cruz.  But Idaho Falls chips away, and ties the score in the 8th on a bizarre only-in-rookie-league play.  Pitcher Clinton McKinney whirls around to try to pick the Chukars’ Tim Ferguson off of second.  The throw goes into center field, and Ferguson trots to third.  As he slows down at third, however, Ghosts’ center fielder Rafael Ortega goes to throw the ball back to the infield…but it slips out of his hand, and the ball goes shooting into the air towards right field.  Ferguson kicks it into gear and sprints home.  E1 and E8…tie score.

Travis Jones eventually wins the game with an 11th inning walk-off single.  Unfortunately, the very kind Kenneth Roberts gets the loss.  I hope the word doesn’t get around that pitchers who high-five my son from the bullpen wind up getting tagged for the loss that night…100% of the time so far.

In 2013, Dominique Taylor’s walk-off single wins it for the Chukars.

Anthony Mulrine wins a game with an 8th-inning home run for the Orem Owlz.