Ogden is about 40 minutes north of Salt Lake City, so the family didn’t bother changing hotels and instead made a day trip out of it, wearing the boy down a little bit at the Ogden Children’s Museum (a good place) and dining at Great Harvest Bread before heading to the ballpark.

If possible, the views

past the outfield fence at Ogden were even more beautiful than they were at Salt Lake City, which is to say they were absolutely stunning.  It’s a slightly different set of mountains there in Ogden, and unless I’m mistaken, the ballpark is a little closer to the mountains than it was in Salt Lake, which made for a breathtaking vista from literally any seat in the ballpark.  The ballpark did reasonably well in commemorating Ogden baseball history, but even if it hadn’t, it would have aced the “Is There Any Question Where You Are” test.  Seriously.  Consider the view from behind home plate…we have an American flag, a Mormon temple, and gorgeous mountains.  If I were to put you in a controlled coma, whisk you to a seat behind home plate, then revive you and demand you state where you were in the US, that’d be all you needed.  Utah.  There were other nice touches–most notably some killer-looking burritos from a local chain–but I simply

cannot imagine a more gorgeous place to enjoy a game.

The smallness of the place was also really fabulous.  One could nearly–but not quite–circumnavigate the stadium on the inside, and could enjoy some nice views while leaning over the left-field fence.  And before the game, I went down the left field line to a picnic area, where I was able to eavesdrop on a conversation between Owlz’ (Owlz’s?) catcher Hampton Tignor and pitcher Pill Joon Jang on exactly what their signs would be, and how they would change if there were a runner on second base.  If I had had a mind to (and been a rabid Raptor fan), I would have been able to jot it all down and run it right to the Raptors’ coaches.  Of course, I don’t take rookie league rivalries so seriously.  (Alas, some fans do.  The only two Pioneer League teams in Utah are sort of natural rivals,

which I don’t understand, since very few players are on either team for more than one year.  But still, one otherwise-sophisticated season-ticket holder showed up in an “Orem Sucks” T-shirt.  Not too clever…and probably a bit too angry.)

But they seem to get the idea of making fans happy.  They delivered balls to every kid they could see in the stands during the pre-game, including a ball for my son.  This was his second Pioneer League ball in two Pioneer League games…I had snagged him one in Missoula a year earlier.

So I was in a good mood.  My first impressions were overwhelmingly positive, but I did my level best not to get carried away.  You see, I’ve been burned before.  I fell in love with the ballpark in Missoula and then was driven away by the loudmouthed PA and the disgustingly

overdone promotions.  This was only my second Pioneer League game…what if the entire league was loud like that?  So I didn’t commit to loving the place immediately.

I was impressed with the ushers.  I might be putting two and two together incorrectly here, but the ushers were nearly all athletic-looking men in wheelchairs.  The 50/50 raffle that night went to support a wheelchair basketball team that may or may not have been associated with Ogden’s Weber State University.  So I concluded that the Raptors allow groups to be ushers in order to make a few bucks for their organizations.  Nice touch, I guess…give something to the community rather than just create a 10-week job for somebody. 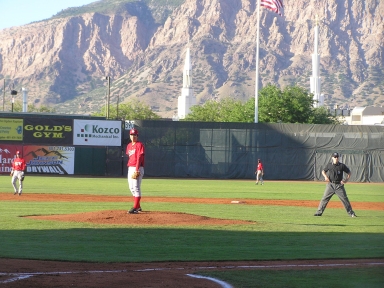 and not trying hard enough.  They tried too hard in that they played stupid and only marginally-relevant sound effects between too many pitches.  I don’t mind a little spectacle at a low-level game like this, but they went overboard.  There was a spittoon sound effect that Michelle and I couldn’t figure out the purpose of.  Also, they introduced the evening with this completely inaccurate statement:  “Welcome to Lindquist Field, home of the Ogden Raptors and the Los Angeles Dodgers!”  Um…no.  I cannot find a way to interpret this sentence so that it is accurate unless the Dodgers move a weekday series against the Pirates or something to Lindquist Field.  At most, one or two rookie league ballers will ever smell the majors for even a cup of coffee, so this was optimistic at best and misleading at worst.  I wonder if the PA guy misspoke.  Even though there were a couple of funny moments–even a sometimes-too-sensitive referee like me giggled when the umpires were introduced to the Imperial Death 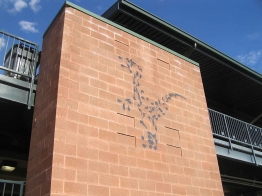 March from Star Wars, and as the team was introduced, it was nice to hear the ever-danceable-but-mostly-forgotten “Walk the Dinosaur” by Was (Not Was)–overall, the sound effects got in the way rather than enhanced enjoyment.

In any event, more problems ensued when there were pitching changes and pinch hitters.  While lineups were posted (with the very cute “prey”

designation for the opponents), other than the starters listed in the pavilion, there were literally no uniform numbers given anywhere for the opposition.  We had a list of their players, but not their numbers.  Add to that the fact that the PA guy didn’t announce some pitching and defensive changes at all, and the net result was that I was at a complete loss as to who was playing late in the game.  I picked up that the Orem catcher changed in the ninth inning, for example, but had literally know way of knowing the new guy’s name…just his number.  This is only the second time I’ve been faced with such an egregious disregard for anyone curious as to who the substitutes might be (the first was in South Bend), and I have to say

that I don’t like it one bit.  If the game management people had channeled even 25% of the energy they spent on irrelevant sound effects into communicating relevant information about the players–or, at the very least, provided a numerical roster–I’d have been much, much happier with the ballpark.

The evening did provide a wonderful and memorable moment involving my son–the first evidence that he pays attention to what happens on the field of play.  Steven was only 16 months old, this was his ninth ballpark in his fifth state, and his 20th game.  He’d started looking onto the field, but was easily distracted…and who’s to say that he’s really watching out there anyway?

Well, that all changed.  During the top of the ninth inning, the Orem Owlz’ Daniel Eichelberger was taking his

cuts in the on-deck circle.  Steven pointed at him and said the following:

Mr. Eichelberger wears #3 on his back, and at that moment, Steven was learning his numbers and letters pretty hard…and three was one of his favorites.  I can therefore say with confidence that Daniel Eichelberger was my son’s first favorite player.  I can also say that my son was actually paying attention to what went on on the field. He knew the opponents’ numbers better than the Raptors’ game management and PA guy did!

last couple of innings…but then he had to pick an Orem Owl as a favorite player.  But it’s the Raptors’ fault for not playing a player who wore #3.

The game ended quickly–just before dusk–which meant that we didn’t get to see something that Michelle was curious about.  We’re fairly sure that all Mormon places of worship light up their spires with their pointing Angel Moronis at night.  We’re wondering what that would have looked like after sunset.  I guess we’ll have to go back another time and see if we get a longer game to find out.

So, while these nit-picks drag down the score from very high to merely high, I still enjoyed this simply gorgeous ballpark in Ogden.  Anyone in northern Utah during the Rookie League season would do well to stop for a game here.

I simply can’t imagine it any better than this.  That triumvirate of an American flag, LDS temple, and mountains means only Utah.  That, and some damn fine Mexican food.

Charm:  4/5
Very nice.  Sound guy tried a little too hard, but still, a winner  in this regard.

Spectacle:  3/5
A few too many between-pitches sounds,  many of them not at all relevant.  They can turn it down a notch during the game and limit the silliness to between batters or (preferably) between innings. 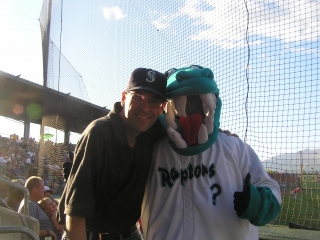 I’m going to assume that there are a number of fossils found nearby, which means “Raptors” is fine.  Oggie himself doesn’t do much for me, however.

Aesthetics: 5/5
Flat-out gorgeous, and the park stays out of the way and emphasizes its surroundings.

Pavilion:  4.5/5
Can’t quite walk around the place, but one can come close.  Nice tributes to former Ogden players like Frank Robinson.  Up top, one never needs to lose sight of the game while getting food.

I appreciate the lineups, but there is literally no way to figure out who was playing for the opposition.  No rosters were given with uniform numbers, and the PA guys were overtly apathetic about Orem lineup changes, both pitching and at the plate.  Needs a lot of work here.

Fans:  4/5
I like the cadre of regulars there.  They did a cool call-and-response thing during the opposing lineups. PA:  “PLAYING THIRD BASE…JAKE SMITH.”  Crowd:  “WHO?”  PA:  “Smith.”  Funny.  During the game, there was a little too much heckling for my tastes–if one is reduced to anger at a Rookie-League-level rivalry, one needs to reconsider one’s priorities.  But still, a cool group of people.

Intangibles:  4/5
A lot of good here–even the problems with game ops didn’t sour my taste of a beautiful ballpark that I one day hope to see again.

Five Orem errors–including a lamentable three by Rolando Gomez–are far too much for the Owlz to overcome.

Daniel Eichelberger goes 2-for-4 with a double and an RBI.

Bobby Coyle is the hitting star for the Raptors, picking up 3 RBI, including one on this solo home run.