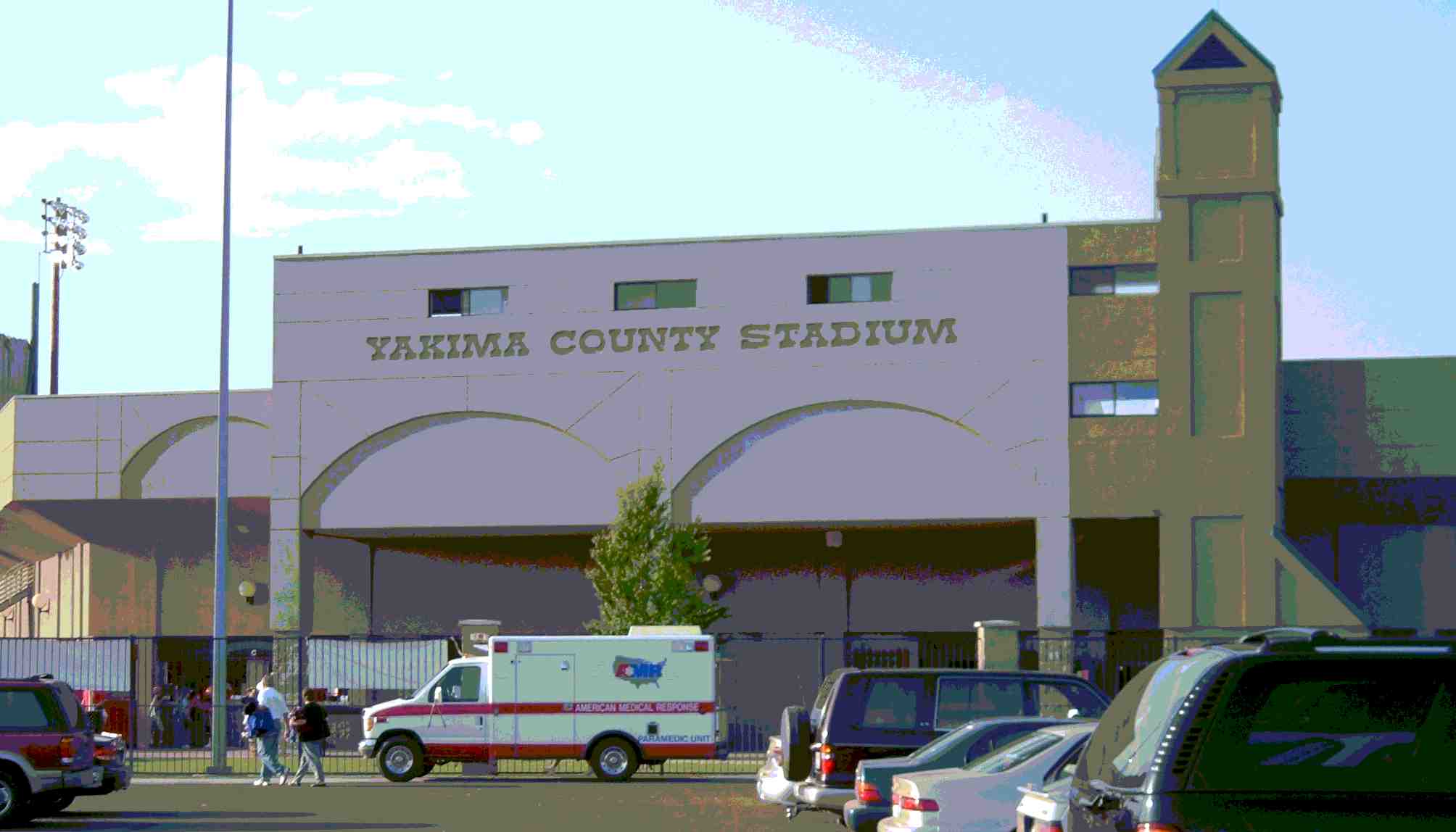 (Yakima County Stadium is no longer used for affiliated baseball as of the 2013 season.)

In the competition for “Longest drive made to meet Paul at a baseball game,” the nominees

are:  3.  My dad, who took an airport shuttle two hours to get from Columbia, Missouri to a fine game at Busch Stadium.  2.  Rob, who drove about two and a half hours from State College, Pennsylvania to meet me at Three Rivers.  And the #1 longest drive to meet me at a ballpark:  Brian and his wife Annie, who drove two and a half hours from Seattle to meet me in Yakima.  They win the tiebreaker over Rob because–let’s face it–they drove to Yakima and did so for a short season single-A game.  It’s nice to have friends like these.  The Yakimas of the world are nicer when you can share them with friends. 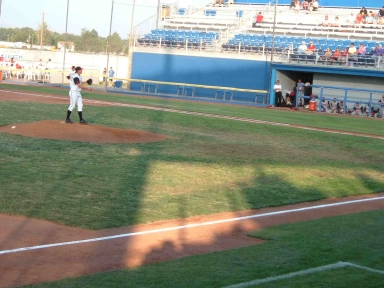 Brian, a fellow teacher, a guy I call “my hero and mentor” (and he thinks it’s tongue-in-cheek), has a daughter who is working on her medical residency in Yakima.  I had forgotten this when I jokingly invited him to join me in Yakima for a ballgame.  I was pleasantly surprised when he agreed, saying he’s always looking for an excuse to visit his daughter Rachael.  Given that we’re both teachers (yay, summers off!),  he did, in fact, meet me in Yakima for Northwest league baseball.  His daughter joined us, and somehow, I wasn’t bothered when she studied during the game for tests she’d be taking shortly.  My answer to the questions about people with difficult medical

challenges was always the same:  “He should be seeing a doctor.”  Strangely, it was never the right answer.  The Yakima crowd made it easy for her study–there were few of them and they were quiet, even on Thunder Stick night.  (By the way, there is precedent in my life for studying at sports venues.  My brother claims he studied in college at the bowling alley…the general cacophony there was easier on him than the complete silence of the library.  Me?  The library all the way.  I had a carrel way down in the dusty bowels of the place.  Perfect.)

The Bears’ people did well to keep things active during the game.  They featured loads of promotions, and wacky ones, such as attempting to throw toilet plungers into a toilet, a cream pie eating contest, and an attempt to catch high-slung T-shirts with butterfly nets.  There were probably other promotions as well, but I couldn’t hear them–the PA system was awful.  On the whole, the atmosphere wasn’t exactly electric…a routine seating bowl which, as 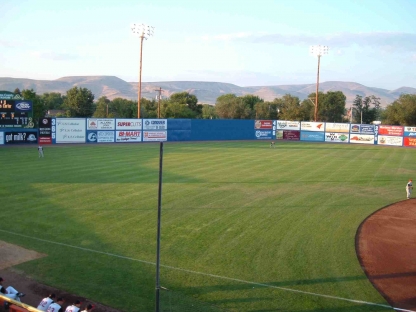 I said, is mostly empty.

The ballpark itself  has some nice quirks.  It’s incredibly short–293 feet–down the lines, and Yakima’s dry, relatively high air must make those foul poles inviting targets.  However, the short porches at the poles become longer in a big hurry, as the outfield wall juts more or less straight out from there…the dimensions go from 293 to 340 in a big hurry.  The views of nearby mountains are charming, and if you’re heading to Yakima, you might note that the first-base side is home to the hot, sunny, uncomfortable seats.  The sun can be such a problem for spectators and fielders that they have put up a big screen past the third-base seats to block it.

On the whole, I’ll remember a fun night with my buddies in the middle of nowhere–one old friend with whom I can talk baseball and shoot the shit, his kind wife, and a woman who’s working on bringing health care

to the Yakima Valley.  What more can you ask than that?

July 2005–I returned to Yakima with my fiancée during the month of our wedding for that year’s July 4th Minor League Baseball trip.  And in the process, I managed to make my baby feel wonderful–nearly crying–and make a silly rookie mistake at the same time.  A local florist had a promotion called Sweetheart of the Game…basically an essay contest.  Write a few sentences about why your date should be the Sweetheart of the Game, and the winning essay’s sweetheart gets flowers delivered to her at her seat.  I wrote that Michelle and I were getting married on the 29th of that month, that we were on our third annual 4th of July Minor League Road Trip, that said road trip was originally Michelle’s idea (this is especially impressive to those who believe I’m dragging along an unwilling partner to all these ballparks), and that I loved her very much.  Well, they picked Michelle as Sweetheart of the Game (of course they did…I’m a poet, dammit), and Michelle was surprised and touched…she confessed later she nearly cried.  So what, you ask, was the rookie mistake?  This was…I wrote the wrong damn date for our wedding.  We were getting married on the 30th, not the 29th.  The 29th was the rehearsal dinner…where Michelle threw out the first pitch at an Everett AquaSox Game and where I sang the National Anthem.  We’d been spending the whole weekend talking baseball and playing catch, so the baseball on my brain led me to write the wrong date down…so Michelle corrected the announcer, saying “Actually, it’s the 30th.”  What a doofus move.  But she pointed out that this was short-season A ball, and so it was fine that I made a rookie mistake.  I’m thankful for that, because I want to spend my whole career in her organization. 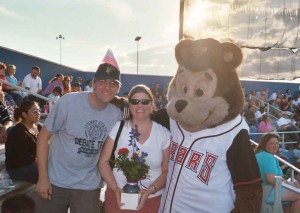 Regional feel:  8.5/10
The view of nearby mountains is nice.  The museum area with the exhibit about Yakima-connected “Hub” Kittle is better.

Charm:  2/5
Reasonable here, in a county-fair sort of way (the stadium  is located on fairgrounds), but I can’t look past the foul-ball screen obscuring the view of literally every seat, the way-too-quiet PA (couldn’t hear him from my seat by third base!), and the horribly-maintained infield.

Spectacle: 5/5
Wacky low-minors stuff that never interferes with the game. 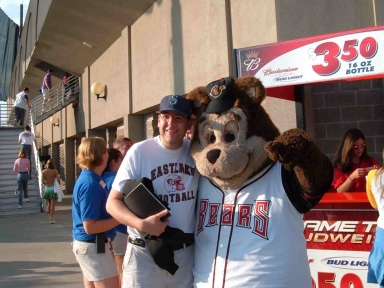 Boomer Bear is about what you’d expect–a bit conventional and not locally appropriate.

Aesthetics:  3.5/5
The stands themselves are unattractive, but it’s quite a nice view.

Pavilion area:  4.5/5
Love the exhibit, though both it and the entire pavilion can be a bit larger for my tastes.

Scoreability:  2/5
I had to guess at some tough scoring decisions, and the lineups in the pavilion neglected to tell me first names and uniform numbers.  Plus, a scoreboard malfunction made one strike look like seven strikes.

Fans:  3/5
Gets a little better every time I go, although I’m still remembering how quiet the first game was.

Intangibles:  5/5
I wasn’t a fan after my first visit, but the last two have each brought tremendous memories…my baby crying at being named Sweetheart of the Game, just a few weeks before our wedding…and four years later, in 2009, both my wife and I tearing up as we watched our son totally transfixed over his first-ever fireworks. 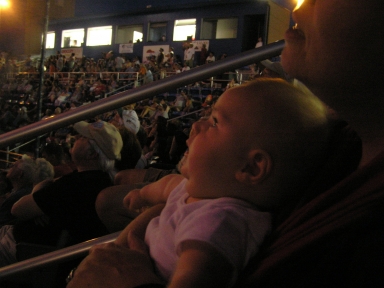 Two homers for Chris Carter set the table for the Bears’ win in my inaugural visit.

As of July 2004, Chase Smith had two losses in professional baseball, and I’ve been there for both of them:  the first in Eugene a week earlier, than this one.  Chase–send me a few bucks and I’ll not show up anymore.

For July 4th weekend of 2005, Michelle and I saw Yakima’s Angel Rocha give one of the poorest pitching performances imaginable.  He made it two-thirds of an inning…faced ten batters.  Two outs, six walks, and two hits–all of them scored for 8 earned runs, or an ERA for the outing of 108.00.  It didn’t get much better for Yakima thereafter.

In 2009, Yakima comes back with an 8-run 8th-inning–aided by a pair of bases-loaded walks–to defeat Spokane.