The Braves left Turner Field for the 2017 season. The park was reconfigured and now hosts Georgia State football.

FUN THING TO DO:  Go up to a concession stand at Turner Field, preferably with someone else. 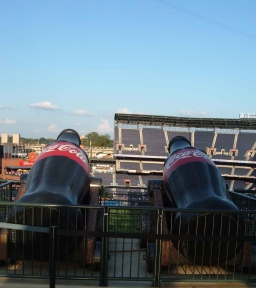 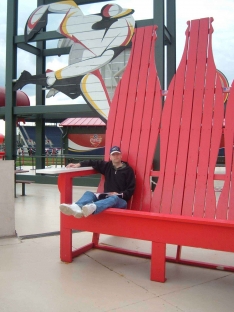 you’d like to drink, say:  “How about a Pepsi?”  See what reaction you get.  My guy, fortunately, laughed.

Turner Field came to us at the tail end of the new-retro stadium craze of the 1990s, so we can count on its quality.  It has a lot of the positive attributes of ballparks of its era, including charm in its architecture and a sense of history integrated into it.  The folks at Turner Field also make a good night’s entertainment out of the game.  Combine that with quality baseball the Braves traditionally give, and you have a fine Georgia night.

I made it all the way up from a game at Sarasota, Florida the night before, listening to sports talk radio and Les Miserables for most of the trip.  The plan was to take it easy and only attend the Wednesday afternoon game that my kid sister was flying down for, but the drive wasn’t as difficult as I thought it would be.  I was up in time for a Tuesday night game, and decided to get a cheap single ticket.  The ticket woman offered me a front row seat in center field, “right behind Andruw.”  I took it.  And I enjoyed a load of pre-game hype.  The Braves have one of the best drum/dance troupes out there.  As they did their big drumming and dancing routine on the center field pavilion before the game–awesome rhythmic dancing by the drummers, gyrations by the cute young women in pink–I thought they were the entertainment recruited

for just the one game.  I was wrong.  They’ve hired some excellent drummers to bang away both before and during every game, while the scantily-clad pink ladies dance around, periodically appearing on the giant scoreboard for promotions.

And oh, that scoreboard!  It is the largest LED screen in the United States.  I don’t care how much of a traditionalist you are…you’ve got to admit that’s kind of cool.  There’s enough room that the bottom 20% or so of the board can be devoted to full lineups AND statistics AND the linescore of the game, still leaving a breathtakingly large expanse for pictures and replays.  I certainly hope that the Braves have a charity auction where they team up with Xbox or Playstation or someone to sell the right to sit in center field and play video games on the big screen.  I’m not a big video game guy myself, but I would pay big bucks to do that.

The stadium itself is designed well, albeit not quite as well as others of its generation.  I’d like to be able to see the field from the concourse (like in Coors Field or Safeco Field, to name two).  I’d also like to have a view of the outside world from the upper-level concourses, like at Jacobs Field. It’s a hell of a long trip to the top of the left-field stands by the foul pole, which is the only place where spectators can get a look at the downtown skyline.  Plus, the overwhelming Coke advertising is oppressive.

Still, there were many positives.  Most notable was the wonderful concourse.  There is a nice party atmosphere to be had there, and you don’t need a ticket to be there.  Of course, you do need a ticket to get in with the drummers!  Anyone can walk in and see statues of Warren Spahn, Phil Niekro (with a perfect knuckleballers grip), Ty Cobb, and Hank Aaron (twice).  There are 6-foot-in-dia

meter baseballs representing each of the Major League clubs and several other notable baseball events.  Quite beautiful.  Also, I appreciated how the Braves did such a thorough job documenting their history.  I didn’t have a chance to visit the Braves Museum, but that’s very much the kind of thing I like in my stadiums.  I also like the Braves’ history in the concourse.  They had every single team photo since the Braves moved to Atlanta on display.  The 1995 World Champions are honored with a large mural, but even the lamentable teams in history like the 1 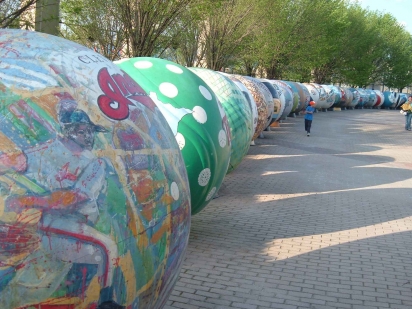 985 Braves have their team photos present. There is something slightly amiss in my eyes about Braves fans.  Hard to pinpoint it exactly, to be honest, but there’s just a hair of smugness about them.  Make no mistake–I enjoyed the company of a very nice man from Knoxville and his sweet daughter on the first night, and a guy who didn’t mind my sister rooting for the Nationals on the second night.  Still, it seems strange.  When I attended this ballgame in 2005, the Braves were on a string of 12 consecutive division titles, and were favored to win a 13th…but each game featured only about 20,000 fans.  What’s the deal?

Of course, the Braves suffer from a certain self-obsession that probably comes from their field’s namesake.  My kid sister Kathleen flew in from DC to join me for a Nationals/Braves game; this, the day before the 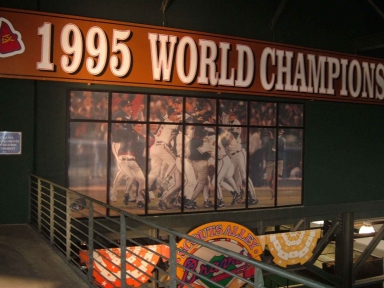 Nationals’ first home game after moving from Montreal.  She brought me a baseball cap that said “Washington DC” on it, just to force me to display allegiance to her new team.  She was very excited to pick up a Nationals hat, since Nationals Fever was so pronounced in DC at that time that she couldn’t find one there.  We wandered around the ballpark looking in the shops.  Braves hats.  Braves hats.  More Braves hats.  Come ON!  I can’t remember ever being in a ballpark that didn’t sell caps for any other MLB teams.  What’s more, I would think selling others’ caps would be good business…there are surely a few people per night who want to buy that night’s opponent’s hat, or some other rival’s hat.  So we asked a 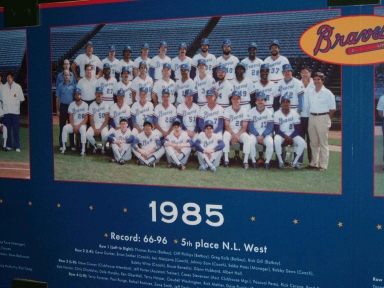 cashier:  “Where can we find hats for teams other than the Braves?”  Her answer, I swear to God, was this:  “At the other teams’ stadiums.”  Yes, she really was that snide.  Whatever…that’s $25 Ted Turner won’t be getting.

If memory serves, this is the fourth ballpark I’ve been to with Kathleen. 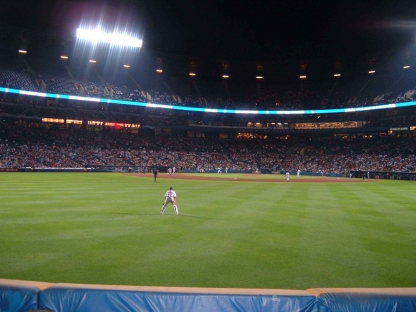 I casually–half-jokingly, actually–mentioned to her that I was going to go to a game in Atlanta, and that if she wanted to, she could swing by.  Much to my surprise, she obliged.  She’s a very busy first-year lawyer who is, of course, slammed with first-year lawyer work which had included flying back from observing the Djiboutian elections just a few days before taking a day off to fly to Atlanta.  (For those of you scoring at home, Ismael Omar Guelleh ran unopposed and won.)  She told some fine stories about the Djibouti City Sheraton, which, apparently, is not at all like a Sheraton.

Anyway, between her cool jet-setter stories and a big Nats win, we had loads of fun.  In fact, we had every bit as wacky a time as I do with my brother or with my buddy Rob.  Case in point:  When the Nationals got on a couple of runners, Kath and I started shouting:  “C’mon Nats!

Bring him home!  Bring him home!”  Now, when you were raised in the house Kathleen and I were raised in, what follows will seem like normal behavior, but I recognize that it might feel downright bizarre to others.  But whenever any bit of dialogue happens to distantly remind any Hamann of any song, it instantly becomes a moral imperative to sing that song, ideally with great gusto, and with harmony if at all possible.  So I’m not sure who started it–I’m probably the guilty one–but it didn’t take long before we were singing the chorus to “Bring Him Home,” the show-stopping heart-rending climax of Les Miserables.  “Bring hiiiim hoooooooooooooome…bring him hooooooome…” High notes, schmigh notes.  Colm Wilkinson had nothing on us.  Of course, when we got to the bridge (“He’s like the son I might have known/If God had granted me a son”), it was important for me to make up wacky baseball-appropriate lyrics.  Alas, the exact lyrics are lost to time, but they probably went something like this:  “It surely would be very fun/If Jose Vidro scored a run…”  Laughing.  High notes.  We had about a three- or four-row buffer zone between us and the next fan (remember, only 20,000 were in attendance).  It wasn’t enough.  The Atlantan a few rows ahead of us turned 180 degrees around to check out the freaks.  I had on my Washington DC hat.  He probably figured I was a government weirdo.

There were a surprising number of Nationals fans at the game who, like my sister, were getting a jump, seeing their home team before they had a home game.  After enduring a ninth-inning rain delay, during 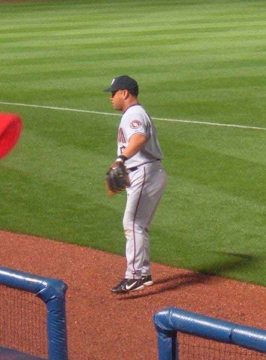 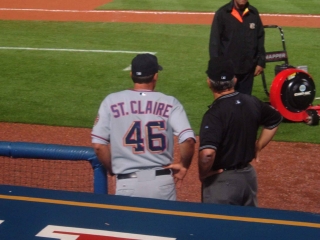 which most of the crowd went home, the few fans who remained came up behind the dugouts to cheer.  That’s how I found myself behind the Nats’ dugout, surrounded by Nats fans, watching Nats’ pitching coach Randy St. Claire converse with umpire-in-chief Randy Marsh, watching Carlos Baerga warming up, and watching legendary Frank Robinson, who, immediately after this photo, gave a friendly wave to the guy next to me who shouted “DC loves you guys!”


So, quite a fun pair of nights.  The ballpark had positives (fun atmosphere, good sense of history) that outweighed its provincialist

negatives, and I got to do it all with my kid sister who very kindly took a day off to fly down.  Thumbs up for both the park and the experience.

Two Nationals wins, the first one quite dramatic.  The Braves led 3-1 going into the ninth inning.  Danny Kolb came on to close it out, but failed.  A walk, a hit, and a walk, and the bases were loaded with nobody out.  Kolb got a fielders’ choice and a sacrifice.  Two out, 3-2, tying run on second.  Brian Schneider up…and he spanks a double to right-center.  The Nationals lead.  The skies open up…it’s a big downpour.  Rain delay for 31 minutes.  The suddenly cold, wet night sees Chad Cordero nail down a save.

One thought on “Turner Field”