It’s a hell of a drive from Miami to Tampa, especially when a fan is trying to make a Sunday afternoon game after a Saturday night game after a Friday night red-eye flight from the opposite corner of the country.  Perhaps this was a foolhardy move, but I made it.  I zipped across Alligator Alley after midnight.  Traffic was very light…just a couple of truckers and me.  I had a hotel room set up in Naples, which I took to be about the halfway point.  As usual, very nice people guided me along the way.  I didn’t know where my hotel was, so although I wasn’t hungry, I stopped at an all-night McDonald’s off the interstate–the first exit in Naples–for fries and to ask for a phone 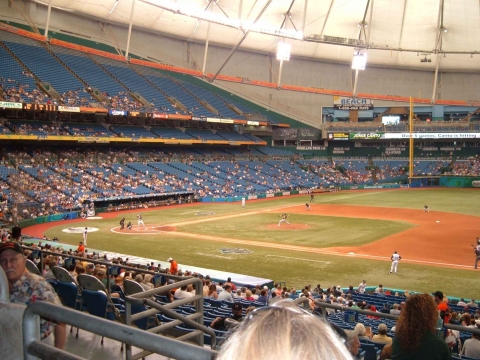 book.  The manager didn’t have a phone book, but he went to the back room and actually called the hotel to ask directions.  There are good people everywhere in the world.  If you’re in Naples, be sure to grab yourself an adult happy meal and thank the guy for going above and beyond.

I made it to St. Pete in plenty of time for that afternoon’s ballgame.  I met up with my ubiquitous Florida relatives.  I would be willing to bet that more people have relatives in Florida than in any other state.  I wonder if anyone has done the research on that?  My relatives are from my mom’s side and fairly big sports fans.  They were kind enough to get me a ticket and meet me at will call.  Once I got to the seats, I was met by one of their relatives, who was across the ocean from England and taking in her first baseball game.

Gloria was her name, and I took it upon myself to teach her the game as best as I could.  I lived in England for a year in college, and while there, learned trace elements of cricket, so I could compare a few of the basics for her.  And for that, I got to hear her English-little-old-lady-accent analysis of the game.  When Joey Gathright was caught stealing in the fifth inning–this after I had explained the risks and benefits of the speedy Gathright’s imminent stolen base attempt–her analysis of the play was as follows:  “Oh!  That was dear, wasn’t it?”  I love that British use of “dear” for “expensive.”  We must try to get it to catch on in this country.

The ballpark itself certainly tried hard, but in my mind, nothing can get me past its status as an ugly dome.  It’s quite simple:  I’m from rainy Seattle, I’m on vacation in Florida–the Sunshine State, for goodness sake–and I want to spend my afternoon at a ballgame in the sun.  I asked my local aunt why they built it as a dome.  Her answer:  “Without it, we’d never get a game in.  It rains at 4:00 every afternoon.”  I didn’t point out that it was about 4:00 when I asked that…and it wasn’t raining.  At the very least, couldn’t Tampa have an open-air retractable roof like Seattle’s?  Secondly, I’m afraid the building’s interior is simply ugly…grey colored throughout, covered with advertising. There’s an annoying orange catwalk which surrounds the stadium, blocking off the leadoff hitters on the scoreboard.  It’s no wonder that this, combined with Devil Rays teams that have literally never been anything other than dismal, leads to so very many empty seats at Tropicana Field.

In spite of this, Tropicana Field has supplanted the HHH Metrodome for the dubious honor of best domed stadium I’ve ever been to.  It doesn’t have the layout of the dreaded multi-purpose stadiums…it appears to have been built for the exclusive purpose of baseball.  They use the long, skinny scoreboard that wraps around 90 degrees of the field to put long

messages about each batter; sometimes something as basic as his hometown (which I appreciate) and sometimes longer, deeper statistics.  The ushers dress up in flowery shirts–totally appropriate for the place, thus aiding in the do-you-know-where-you-are test (which the ballpark still fails).   They have a nice mosaic path of fish swimming to the stadium.  There’s even a real-life moat-like ditch spectators cross when approaching the ballpark from the south.  The field turf is the only kind of turf an indoor ballpark should be allowed to use.  Although players have complained about the full dirt basepaths (rather than the cutouts that turf ballparks usually go with), they do add to the ballpark aesthetically.  So they’re trying to make the best of a bad situation–a lousy team in a yucky dome.

After the game, I got to talk to one of the matriarchs of my family…I think she’s my oldest living relative.  She didn’t come to the ballpark, but we talked for a while after the game while I audiotaped her.  She’d recently lost a sister who was a huge Tigers fan.  Aunt Joyce.  I don’t remember meeting her…if I did, it was either a long time ago, in a room with a hundred relatives, or both…but she and I were both fans enough that the family decided that I should get her Tigers scrapbook.  Aunt Joyce was a librarian who scored the games, so I was looking forward to seeing handwritten scoresheets featuring Gehringer and Greenberg.  Turned out not to be true…her big season was the 1968 season, and rather than her scoresheets, there were meticulously clipped newspaper articles of the Tigers’ 1968 pennant and playoff run.  It was fun to see.  I was hoping I could see at least one scoresheet, as that would be the tightest link between me and this relative-I-wish-I’d-met.  I got my wish on the inside of a 1971 All-Star Game program.  She must have gone to the game at Tiger Stadium.  She gave up scoring it after the fourth inning–and I can forgive that, this being an All-Star game with a million substitutions, and the program scoresheet not being sufficient for that.  But she scored it carefully, with small, precise writing.  And she scored it for long enough to get in Reggie Jackson’s famous homer off of the light in right field.  I sincerely wish I’d gotten to talk to her.  I saw Dwayne Murphy do the same thing.

All in all–a nice afternoon with nice people in a not-so-nice ballpark.  I enjoyed it, but won’t shed any tears if this team moves on from this ballpark.  There’s nothing at all special about it.

Scott Hatteberg homered and went 3-for-5.