What might have been…Michelle the Girlfriend worked for this franchise for a couple of years, overseeing its 2001 move from Portland.  And I was all set to head out there during the summer of 2002 to serve as a general dog’s-body for the organization. 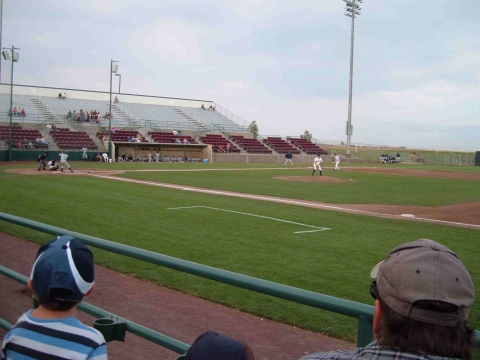 (Michelle said she was considering using me as official scorer until they found someone who could do it more regularly, then having me pinch-hit wherever I was needed for the rest of the summer.)  But, alas, Michelle left the Dust Devils before the season began and moved to Seattle with me.  Oh well…lose summer employment, but gain Michelle the Girlfriend’s constant presence.

If anyone ever asks you what public relations staff must do for a minor-league team, keep in mind (and this I never knew) that one of the duties is to dress as the mascot for winter appearances.  This makes The Dust Devil (who technically  does not have a name, although I was encouraged by Tri-City staffers to call him “Dusty”) was, when my girlfriend was in the costume, the sexiest mascot in the United States and Canada.  But take a look at that thing…what IS it?  A dust devil, I know, but does it look at all like one?  The nickname of Dust Devils is a fine nickname, and totally appropriate (I walked through 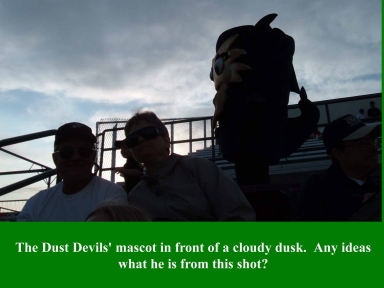 a few on the way to the ballpark, and a good number of them popped up on the field during the game).  But this thing doesn’t look like much of anything, and on top of that, it’s got to be difficult to walk around in that getup.

The ballpark itself is nice.  Not a standout. It’s a part of the local recreational complex, and is therefore surrounded by a billion soccer and  softball fields.  I took my customary walk around the ballpark before play began, and saw people taking softball batting practice on the soccer fields, which, come to think of it, would be a fine place to take a catch before the game.  Also, if you wanted to attend the game for free, please note that on this night, not one but two gates along the left field wall were open.  One led directly onto the field (kinda hard to get in that way) but the other actually led to the seats.  Not that I advocate this kind of thing, but it would have been 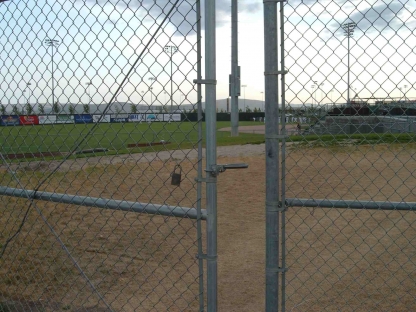 The Dust Devils might consider letting people in for free, actually, since their attendance has been quite low in their four years of existence.  I’m told it can be stiflingly hot even for evening games (please note that the third-base side is the sunny side).  But this July night was unseasonably cool, so the dust-devil winds not only kicked up dirt but made it  a chilly, unpleasant night.  Very few fans were there for the first inning, and after an awful night of baseball (7 errors, 3 by the Tri-Cities in the seventh inning, and a 14-0 Everett lead at one point), there was more or less nobody left but me.  The day started quiet like a bookstore, but ended quiet like a tomb.

The ballpark was huge–335 down the lines.  I’ve not seen a game with so many Texas League doubles and backpedaling middle infielders in my life.  I haven’t looked up the stadium’s history to see if it’s always been that large, but my guess is that they’ll 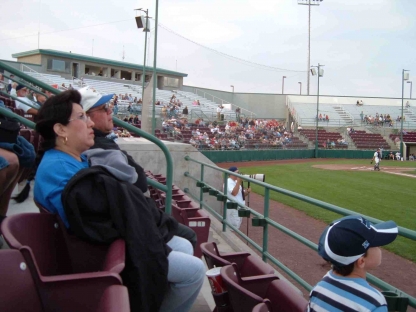 certainly keep it that way as long as the Dust Devils are a Rockies affiliate.  Coors Field is that large as well, and those young outfielders need to practice patrolling all that real estate.

The Tri-Cities workers did their best to keep everyone involved and active.  Erik the Peanut Guy had a microphone on him, and the PA announcer would kick it down to him for promotions and even a few random announcements.  It was a nice touch.  The affable Erik would do his schtick on the microphone, then resume hawking.  By the way, I absolutely loved the personalized T-shirts that the hawkers wore (the backs had their names and statements like “Cotton Candy Expert”).  Erik even did an interview with the mother of the Dust Devils’ third baseman who was seeing her son play professionally for the first time.  His first question to the mother was bizarre.  “So, is this your first time in the Tri-Cities?”  Gee, Erik, what do you think?  Why would this young woman have ever been to Kennewick, Pasco, Richland, or

West Richland before?  (That’s right…there are FOUR cities in the “Tri-Cities.”)  The third baseman had two hits, as the mom said to anyone who would listen to her after the terrible loss–“My boy had two hits!” she said–but really needed to work on his arm.  Like clockwork, at least one of his warmup throws every inning would sail into the front row.  I was in the front row.  I’m fortunate I was not hurt.  It took me until later in the game to figure out what was going on…he was trying to throw to his mother!  What a sweet gesture.  UPDATE:  The kid, Matt Macri, eventually made the majors with the Twins.


One of the nicest 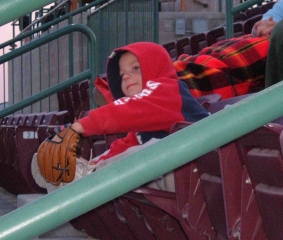 moments I’ve ever seen at a ballpark arose out of a scary one.  A foul ball looped over my head and hit the ankle of the adorable kid in this picture.  He screamed and cried while his mother held him.  The ball rolled down past my feet to a fourth- or fifth-grader in the front row.  He then walked up and handed it to the still-crying little guy.  Would I have had that kind of kindness and grace at that age?  I’m not sure.  In my mind, that gracious young fan is the MVP.  I tried hard to get a ball for the rest of the game–maybe one of the third baseman’s errant throws?–so that I could give it to the kind, charitable youngster, repaying his kindness.  But no such luck.

All in all, a decent night of bad baseball in shivery, windy cold.  Yup–to me, that’s not a bad night. 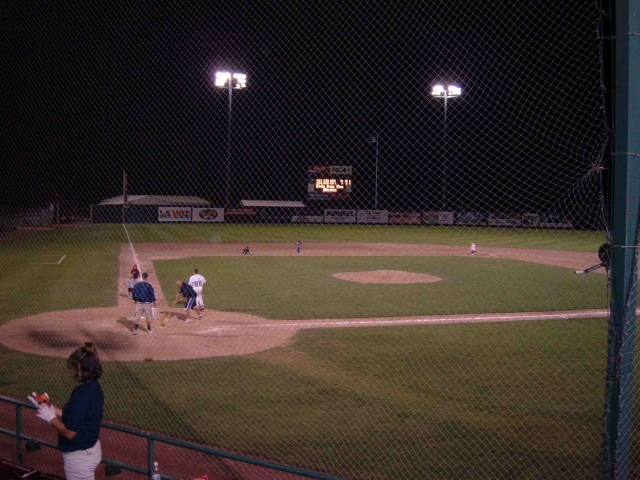 UPDATE 2009: I’ve been back twice since, both for July 4 family baseball jaunts, and have improved my view of the ballpark.  First, some significant changes:  Most importantly, blessedly, and thankfully, the Dust Devils have installed a sun screen behind the first-base stands.  I’ve heard 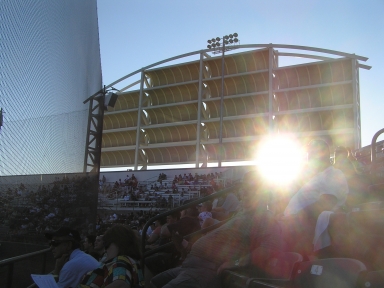 it called an eyesore, but I don’t care.  No more desert sun and desert heat for the third-base side…the screen blocks it beautifully, and it was worth every dime.

Second, the name has changed.  Gesa, a local credit union, has affixed its name to the ballpark.  Not a fan of corporate naming, but if that money helped build the sun screen, then I’m all for it–and might have to transfer all my money into a Gesa account.

Next, Tri-Cities sprawl threatens the character of the area just a little bit, but the view hasn’t much changed…the view beyond the outfield fence still features several rows of soccer fields.

The only negative to the visit were some jerks in the section next to us, who I heard were the Dust Devils grounds crew–let in free for the game.  If that’s the case, they need to tone down the heckling, especially since

they were in my original seat (no big deal, as I just sat in a better one).  Shouting “Ichiro!” at the Boise Hawks’ two Korean players, Hak-Ju Lee and Jae-Hoon Ha, is a rare combination of racially insensitive, geographically stupid, and boorish.  Tone it down, guys.

Finally, and for the first time ever, I was recognized for this website.  I was on my way to the head when Erik the Peanut Guy flagged me down, noticing my Tennessee Smokies hat.  “Is that the Tennessee Smokies?” he asked.  I replied in the affirmative, and Erik asked if I’d been there.  I talked about my effort to get to all the minor league parks, and recommended he visit my website–and I wrote down my name.  He said “Oh, I know you!  I LOVE your website!” and then said “We need to 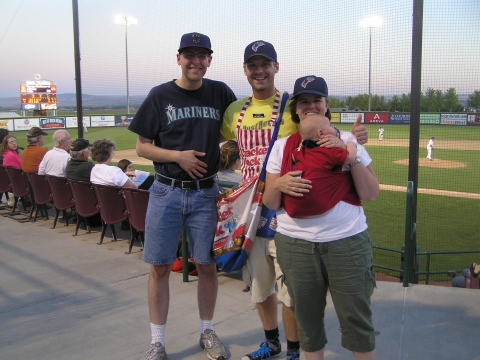 get you a hat.”  He then had the team store give me my choice of hat.  I picked the $22 TC model to complement my wife’s Dust Devil model.  He took some time out from hawking to hang with us for a while.  He and Michelle remembered each other from his days hawking in high school when Michelle worked for the team.  We spent a pleasant inning hanging out.

I’ve got to say, wearing random other minor league hats to ballparks is a good move.   Wearing an Everett AquaSox hat in Princeton, West Virginia bought me a free sledge-hammering of a car.  And now wearing a Smokies hat…and having this website…got me a $22 hat. Thanks, Erik.  You just brought your score up significantly.  Remember–this is not Congress.  Bribery is acceptable.  Giving me presents can increase your ballpark’s score (although there’s no guarantee).

Regional feel:  7.5/10
Lovely views of soccer fields and mountains.  Actual, literal dust devils on the field help out a lot, although those can hardly be planned.

Charm:  2.5/5
Not much going for the physical edifice here, but Erik and his fellow hawkers help out quite a bit.

Spectacle: 3.5/5
A fair number of them, pulled off with nice energy. 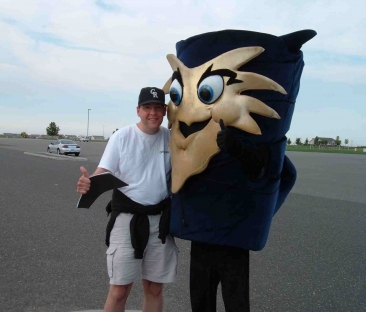 They call him Dusty.  He looks like–nothing.  And they have since put him in a Dust Devils uniform, which actually makes him more perplexing.

Pavilion area:  3.5/5
Could be larger.  It includes an “alumni report” featuring the stats of former Dust Devils, wherever they may be.  This is a fantastic idea that I”d like to see reproduced elsewhere.

Scoreability:  1.5/5
Not good here at all.  Many errors on the scoreboard.

Fans:  4/5
As much as I appreciate Erik, crowds here are pretty sparse.  And while I like the kid who gave up his foul ball, I don’t like the grounds crew acting like jerks to the opposition.  Just cheer and watch the game.  Don’t try to be Andrew Dice Clay.  (I upped this score in 2013 after a much better experience sitting next to Erik the Peanut Guy’s parents.)

Intangibles: 5/5
In spite of all of its flaws, this place leaves me with positive memories.  I’ve been there for a decade now, and thanks to Erik the Peanut Guy, I feel welcome there every time.

My, what a terrible game I saw on my debut visit.  Three hits for the AquaSox’s Omar Falcon led their attack.

Two errors–on back to back plays–by Dust Devil shortstop Pedro Strop (each a throw through the first baseman’s legs), plus another by second baseman Jason van Kooten stretch the top of the seventh into six outs, eight runs, twelve batters, and about fifteen years.  Not that I’m complaining.

In July 2005, I saw what looked to be a stud-pitcher-in-the-making…Shane Lindsey, a free-agent pitcher, struck out 11, walked none, and gave up only 3 hits in 5 innings in a Dust Devils victory.

A crazy close to a game in July 2009.  Tri-Cities scores their winning runs in the eighth inning on a combination of two hit batsmen, a wild pitch, a passed ball, an intentional walk, and a sacrifice fly.  Low-level A baseball.  Catch it.

D.J. Peterson scored on a Huascar Brazoban wild pitch in the 11th inning of a 2013 game to give Everett a victory.

Crazy game in 2017 is highlighted by an ejection: pitcher Mike Bunal was tossed for some word or other: just walked off the mound after he was, too. The Dust Devils win in the 11th on a double, sacrifice, and fielder’s choice.