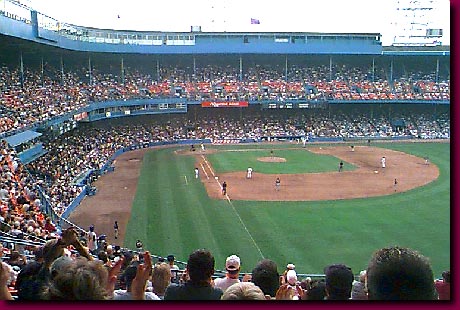 Tiger Stadium is no longer in use as of the end of 1999. The stadium has been knocked down, but the field remains.

Because I grew up in Denver before it had a major league baseball team, I didn’t begin my ballpark quest in earnest until after college.  Tiger Stadium was the exception.  I visited it twice on visits to relatives in Detroit.  I was ten and twelve.  And while I had been to a few Denver Bears and Denver Zephyrs games at Mile High Stadium, my only two childhood major league games were at Tiger Stadium.  Because I was a kid, I can’t give you a fully accurate description–I just thought it was incredibly cool.  I didn’t notice it was in a horrible neighborhood–in fact, I wandered out to the concourse alone during a rain delay to look at the skyline.  I didn’t pay any mind to the 1912 architecture and the beams that obstructed my view from the second deck down the left-field line–I had nothing to compare it to.  This sounds cliché, but what I remember of the stadium was all that gorgeous grass.  Also the funny stuff on the scoreboard.

There was a very long rain delay, which means I got to hang out with my aunt, uncle, cousin, and grandmother for a while watching highlights of the 1979 World Series.  I remember thinking it strange that the umpire would stop the game in the middle of an at-bat and not wait until between at-bats.  The rain delay was awfully long, as was the game, which didn’t finish off until 12:51 AM.  I laughed out loud when the PA announcer said:  “The next Tigers home game will be against the Boston Red Sox…tonight.  Drive carefully.  Good morning.”

My cousin Joe–maybe six or seven years old?–clued me in that Richie Hebner was the absolute greatest player in world history.  When Hebner came to bat in the third inning, Joe shouted from our upper-deck seat:  “Keep your eye on the ball, Richie!”  Even at ten, I found such advice to professionals to be superfluous and silly.  Or was it?  Hebner homered.

I faintly remember heading out to the concourse hoping to buy a pennant and finding I didn’t have enough cash for one.  But the hawker–a teenage kid–talked me into buying a pencil with a pennant on the end of it.  At first, it felt like a poor substitute for the real thing, but I was glad to leave with something.

I went to the 1982 game shortly after visiting my great-grandmother in the hospital.  She was 90 and a bag of bones.  I knew she was a baseball fan and a Tiger fan, but only after talking to her in the hospital did I realize quite how hard-core she was.  She not only knew that the Tigers were playing Oakland, but said something like:  “Every team has their really good players, and they have Henderson.  He’s really something.”  Not bad for a woman born in Kaliszka Gubernia, Poland.

I’m not 100% certain, but I may have tried to score the game when I was 12.  I remember copying the names, anyway.  Maybe I just wrote the home runs down.  No evidence survives.

In short…I have little memory snippets–mostly of the games–but Tiger Stadium will always hold quite a bit of sentimental value for me.  I have no memory of its many problems…just memory of excitement, family, and two good games.

BASEBALL STUFF I SAW THERE:

Looks like I saw Fred Lynn hit a home run.  Jack Morris and Bob Ojeda started my first ever game, but both were driven out early–Ojeda without getting an out.

Rickey Henderson stole a base in the game I saw in September 1982–his 124th of the season, extending his record in the year he stole 130.  I think it was the first inning–he was walked and stole second, but Lance Parrish gunned him down when he tried to steal third.

Dwayne Murphy hit a home run off of a light tower on the right-field roof.  I remember the sound of that.  Crack–fffsssssssssssssss–ping!!! (Okay, maybe the “fffsssss” is added only in my memory.)  The crowd was so surprised and impressed that we gave him a polite golf-clap ovation as he ran around the bases.  There can’t be too many people who have done that in Tiger Stadium’s 87 years.  If the light tower hadn’t been there, I don’t know where Murphy’s shot would have landed…I swear it was still going up.

Lance Parrish, one of my favorite players as a kid (because of these visits to Tiger Stadium, I grew up a Tiger fan), hit a homer in the Oakland game.

One thought on “Tiger Stadium”