The Ballpark in Arlington, Arlington TX

After several name changes from their beautiful original name, the ballpark has been known as Globe Life Field in Arlington since 2014.

So unabashedly baseball-loving, and so unabashedly Texan!  For starters, there’s the deification of Nolan Ryan. 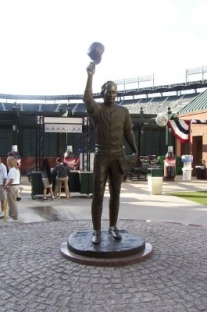 Of course, everybody deifies Nolan Ryan, as he is the only player in baseball history to have his number retired by three different teams.  But in Arlington, Ryan-worship is taken to the nth degree.  The ballpark is located on Nolan Ryan Drive (closer to the ballpark even than the cleverly named Pennant Drive…perhaps because, while the Rangers have had Nolan Ryan, they haven’t had a pennant).  Everywhere you look, there’s a Ryan reminder.  The statue feels right, although I’d rather it not be hidden away beyond the center field bleachers.  It deserves a spot outside the entrance.  Perhaps a little more disturbing was the signed photo for sale in the gift shop of one of the most famous pummelings in the history of sports…his facial on Robin Ventura.  Now, I normally hate bench-clearing brawls, but even I got a visceral charge out of watching him crush Ventura that night.  There was something just so, well, one-sided about it, on top of the notion that you can’t challenge God.  But would I want this on my wall?  Would I pay money to bring this into my home?  Well, maybe if I were a massive Ranger or Ryan fan, I suppose…

It’s not just Ranger or Ryan history that the ballpark celebrates.  It also is a hotspot for baseball history in general.  The ballpark is attached to the Legends of the Game Museum, which contains the largest collection of baseball memorabilia outside of Cooperstown.  I can classify the memorabilia in this museum (and, I assume, in Cooperstown) into two groups:  idol-worship and history.  The first bit–the busts, jerseys, bats, balls, and shoes–does absolutely nothing for me.  Out of all of the items in this classification, I only took a picture of one…Sparky Anderson’s shoes, worn during a game in 1990.  Seriously. 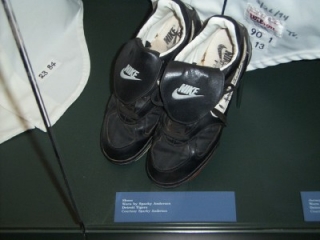 Who the hell wants to see Sparky’s shoes?  And not even from a playoff year?  It reminds me a bit of going to a church in Italy and seeing some saint’s blackened, decaying finger in a glass case.  Only nobody’s praying in front of Sparky’s shoes.  Yet.

The second classification is the numbers section.  I love seeing all of the numbers, and the folks at the Legends museum take care

of theirs with care.  Note the all-time home run leader list in this picture here.  The picture is not otherwise notable except for what’s going on with the tie for third place all-time.  Barry Bonds is tied for third with Willie Mays at 660.  The key here is that I visited the museum the afternoon of April 13, 2004.  Barry had only hit #660 the night before, and would hit #661 that night.  This means that the museum staff are updating their numbers daily!  This is quite a feat, especially when one considers that the museum didn’t just track all-time leaders in at least a dozen categories, but also active league leaders, Rangers’ all-time leaders, and Rangers’ active leaders.  There were quite a few numbers up there that the staff had to stay on top of nightly, and the net result was me feeling exactly the way I like to feel in a ballpark:  like I’m in the middle of a thousand stories that will be recorded for all of history.

Finally, the museum did an excellent job of communicating baseball history, especially local baseball history.  Their large section on Rangers history included an original scorecard of Kenny Rogers’ perfect game, and they branched out to the minor leagues with a large exhibit on Texas League history.  I like this even more than the numbers…these are stories, interesting stories I’ve never known, presented in the context of where I am and what I’m doing that night.

Yup.  There it is, etched in stone for time immemorial:  Larry Biittner’s underwhelming numbers that were achieved, it appears, during the baseball season of 197 A.D.  Immediately, I was curious as to who I could see commemorated from my single trip to Arlington Stadium (which, by the way, I am certain NOBODY but an incredibly sentimental Texan sap misses).  The Rangers had a god-awful day…the only performance I could remember was the horrendous start by Brian Bohanon, who, along with four teammates, helped to walk Jose Canseco five times in five at-bats.  I think it was one of Bohanon’s first starts in a long and undistinguished career.  But I wanted to see him commemorated, so I walked to the 1992 team to find this: 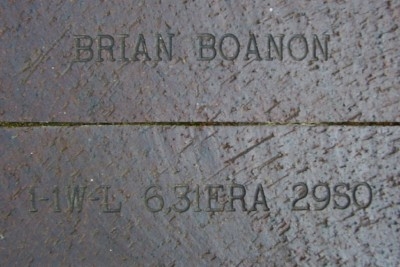 Ouch!  What a sad diss to Mr. Bohanon.  I remember how to spell your name, Brian, even if your former employers don’t.

The exterior also gives an artistic nod to some key images in Texas history in faux-marble (at least I believe it’s faux) etchings along the building’s exterior.  Etchings include an oil gusher, the Alamo battle, astronauts, and cowboys on the range.  When you combine this with the museum and the team bricks, I’m already deeply ensconced in both baseball history and local history.  I can’t conceive of a better frame of mind to be in when I enter a ballpark in a strange city.

Once inside, my only disappointment is the center-field terraces, which seem architecturally out of place.  I assumed they were skyboxes; it turns out they’re offices, and not even just the Rangers’ offices.  (An usher informed me that Troy Aikman has an office

there.)  It seems to me that there’s no need to block off that center field view–even if it’s just of the neighborhood–just to have all offices with ads stacked on top.  But that’s quibbling…the offices don’t look too bad, particularly when there’s so much else the ballpark offers.

The tony club level has suites that are named after Hall of Fame baseball players.  I was able to wander around and check them all out because an usher was kind enough to let me in and wander around “as long as I don’t tell anyone.”  (Does this website count?)   Each suite has a big portrait of the player on the door…a portrait that’s visible to everyone on the concourse and on the ramps headed up to the upper decks.  They further celebrate baseball history–Rangers’ history–by posting plaques commemorating the key games in the Ballpark’s history on the main level…the first game,

Kenny Rogers’ perfect game, the first interleague game (I’d have left that one out…now, it’s just a weird Giants/Rangers matchup), and the first playoff game, plus perhaps one or two I’m forgetting.  The plaque contains the box score of the game as well as a brief synopsis and a picture.  It’s the only ballpark I can think of where there are box scores available for public view.  That’s a major plus.

The ballpark also passes the third-level test…the level-three concourse is open to allow for views.  I looked out on Six Flags (immediately adjacent to the park) and downtown Dallas (quite a ways in the distance). I don’t understand why more of the recent ballparks don’t incorporate third-level views.  It provides local color.  Of course, even without the view, the Ballpark had local color in spades.  For starters, there’s the friendly presence of Texans.  It doesn’t take long for me to join them in calling everyone

I encounter over a certain age “sir” or “ma’am.”  What a pleasant way to get along with each other.  And as if the Ryan-deification, view, sense of history, and trademark Southern politeness were not enough for the park to pass the “is there any question where you are” test, I heard the following actual bits of dialogue from those around me in the park:

“Is an armadillo on the side of the road spooky?  Out where we are, it’s all racoons.”

In the front row, where some fans joined me late in the game:  “Down here, you can smell the dirt.  Intoxicating!”

From a child, in the first homestand after Alex Rodriguez left Texas for New York:  “Is the white team the Yankees?”  His annoyed father should have answered:  “Not yet, son.”  The son also asked a great question about the players that got my imagination going:  “Do they live here?”  How cool would it be if they did?

Incidentally, and much to my surprise, it’s not hard to get a table in the restaurant in the upper deck of right field before the game…I walked in a half hour before the first pitch,

asked for a table by the window, and was back on the concourse before the National Anthem, and in my seat by the first pitch thanks to a speedy, reliable, and helpful waitress.  Not that I would ever want to watch a game from the restaurant, but of the three ballpark restaurants I’ve been to, this one is vastly preferable to Coors Field or Jacobs Field.  It’s simply a matter of orientation.  A two person table by the window out here in right field enables both people to watch the game while only turning 90 degrees to the field.  The same table at Coors or Jacobs, since it’s in foul territory and down the line, would require one of the people at the table to face away from the action to eat, and to make a 180 degree turn, away from the food and his/her companions, to watch the game.  Unacceptable.  (Incidentally, “open 363 days a year”?  I’ve never seen an establishment advertise that way.)

The game itself went off without a hitch.  A nice promotion lets a kid hit a home run in their wiffleball field and set off the home run fireworks.  That’s got to be a HUGE charge for a kid.  Only one little glitch…the scoreboard told me that Kevin Mench had a batting average of .360 and an on-base percentage of .346.  I’m not really a seamhead, but I know full well that’s impossible.  They didn’t fix it for future at-bats, either, leading me to believe they could use a proofreader for their scoreboard graphics.

Special mention has to go to the gentle, 60-ish usher who tossed the drunken college-aged louts who were in the front row next to me simply by saying “Sir, could you come with me?”  When the usher returned, I asked him how he pulled that off.  “He decided he’d rather go when I pointed out how many beers he’d had.”  Ballsy!  Don’t mess with the AARP usher!

On the whole, what a wonderful couple of days.  Texas history.  Baseball history.  Local color.  Kind people.  I don’t know that my travels will lead me back to Dallas…Dallas is one of those cities that business takes you to, and not much else…it’s not exactly a tourist destination.  But if I’m there, you can rest assured I’ll catch another Rangers game.  This ballpark, in my view, is simply up there with the best.  They understand exactly what a ballpark is all about.

A couple of sloppy games.  Francisco Cordero got a save and Brad Fullmer hit a huge pinch-hit double against the Angels.

Jermaine Dye and Damian Miller went deep for the A’s, who roughed up Mickey Callaway for 6 runs in 1 1/3 innings.  Barry Zito got an underwhelming win when the Rangers’ comeback fell short.