(Stater Bros. Stadium is no longer used for baseball as of the 2017 season.)

It ain’t an Iowa cornfield, but Stater Bros. Stadium might as well be.  After a long drive, way past the very last L.A. suburb, well into the desert, way past an exit on I-15 and out of visual contact with anywhere that it looks like someone could live, there’s a ballpark that springs up quite literally out of nowhere.

Obviously, there has to be someone around to go to the ballgames, and in this case, the ballpark lies 10-20 miles from the reasonably-populated towns of

Hesperia and Apple Valley.  The ballpark itself is a few miles down the road from the much-smaller town of Adelanto.  But those who are driving up from the L.A. area will never see those towns.  It’s possible to drive into the desert, watch a California League game, and then drive home without being in a city of any size.  And I love that experience.

In such an atmosphere, the ballpark can’t help but pass the “is there any question where you are” test.  The High Desert Mavericks are clearly in the desert.  The ballpark is surrounded by scrub and sand.

Between the outfield wall and the backing fence lies a stretch of sand.  The only other building visible is the adjacent Bravo Burgers.  On a clear night (as almost all of them are in the desert), it’s amazingly dark and quiet.  It was fantastic.  There’s nothing to be seen or heard in the world but a baseball game…and that is a great way to spend any day.

When one is surrounded by baseball, it’s good to be surrounded in a place where baseball is valued.  The folks at Stater Bros. Stadium have done a good job celebrating their team.  They have an “alumnus of the night,” who they announce on the radio over the PA, and have a write-up of their recent

exploits in the minors.  The columns around the pavilion are covered with the opening day lineups for every season in High Desert’s recent history.  The 1999 team here has already had 3 starters make the majors…not too shabby for High A ball.  There are ushers who will bring you your food or drink in all sections–not just for the high rollers–so nobody needs to miss a pitch.  When I see things like this, I can’t help but compare Stater Bros. Stadium with The Diamond at Lake Elsinore, the other ballpark I saw on this trip.  Where Lake Elsinore had so much non-baseball related stuff going on the baseball seemed incidental, at High Desert, the baseball was central.  Indeed, it was essential.  Kids actually watched the game at High Desert.

Each ballpark had a grassy area by the right field foul pole.  While at Lake Elsinore there were kids whaling on each other, at High Desert, most of the kids actually watched the game, and only a very few rolled around on the grass and pounded on each other.  Parks that value baseball can get people to enjoy it.

The park is a little bit nondescript, but that feels appropriate given the sparse surroundings.  The tan brick matches the desert–all the more reason to focus on the baseball.  People can enjoy a meal at the Hard Ball Cafe, at least until the Hard Rock Cafe’s lawyers get wind of it.  The stadium also features what must be the most austere skyboxes ever constructed:

My good time at the ballpark was enhanced by the fact that the Mavericks were playing a Mariners affiliate, the Inland Empire 66-ers.  I’d seen many of 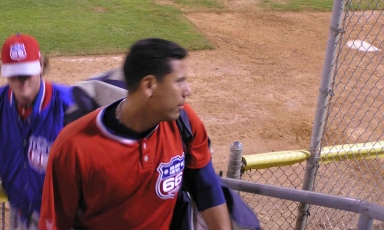 these players play at Everett, and it was nice to see them up a couple of levels.  It was also nice to see them win so handily.  It was cold, and while 1386 people made it to the game (not bad, considering where we were), not many stuck around.  I moved from seat to seat to keep warm, and I finally settled a little ways behind the Inland Empire dugout.  I guess there’s no clubhouse or locker room under the stadium, because 66er players kept walking up the aisle between the seats and the grass to get to a room upstairs.  I stayed there to take pictures after the game, and to watch one of the guys say hi to what appeared to be a new girlfriend.  I felt like a little bit of a doofus taking pictures of the guys, and few of them came out, but it still was fun to watch them all walk by like that.

After the game, put your car’s radio on scan.  I was able to pick up the last parts of baseball broadcasts originating in Denver and Seattle.  There are benefits to being in the middle of nowhere for baseball fans.

Then, as throughout the night, I felt completely immersed in baseball, and it is to the credit of the people at Stater Bros. Stadium.  I can certainly see a day where they no longer feel it’s financially viable to play ball in the middle of nowhere, but I hope it isn’t soon.  It’s a tremendous place to see a baseball game, simply because there’s nothing else in sight.

Charm:  3.5/5
The ballpark is quite charming to me, although it could show a little more personality.

Spectacle: 3/5
Could do a hair more here, given the level of ball.

Wooly Bully and me–in this photo, Wooly is the better-looking one.  The name “Mavericks” is fine, appropriate and local. but the name “Wooly Bully” is taken, I’m afraid.

Pavilion area:  4.5/5
Very nice here…a lot of Mavericks history, and all of it within view of the field.

Fans:  4/5
I give them credit for being baseball-focused, for dealing with the cold well, and for getting all the way out to the ballpark to begin with.

Intangibles:  4.5/5
I couldn’t stop smiling in thrilled disbelief that this place even exists.  It has a real Field of Dreams vibe about it

Robert Rohrbaugh is the pitching star, striking out 6 in 5 2/3 innings.  Three relievers finish a 7-hit shutout.

Yung-Chi Chen has four hits, including two doubles, along with a stolen base and two runs batted in.