Skydome changed its name to the Rogers Centre for the 2005 season.
(Click on any image to view a larger version.)

Welcome to Canada!  I never knew that knowledge of the baseball could ever serve me well at Customs.  Since I knew the Jays were due to play the Rays, I was allowed in the country.

A few hours later, I was inside the Skydome.

Even though Skydome was built fairly recently, in my eyes, it has a distinctively retro feel.  It was the second-to-last park built before Camden Yards revolutionized the building of ballparks, and therefore doesn’t have a good number of the attractions that we’ve grown to expect from Camden’s ilk (such as the outdoor pavilion of Jacobs or Coors Field, rides for the kids like at Comerica Park, wacky dimensions like at Minute Maid Park, statues and sculptures like in about a dozen places, and views of cities or water like just about everywhere now).  It harkens me way back to a time–all the way to the late ’80s and early ’90s!–when baseball parks’ primary purpose was to serve as a place to watch a baseball game, rather than be a massive theme park where baseball viewing is incidental.  This, to me, is a breath of fresh air, and lends Skydome a good deal of charm.

To be sure, Skydome has many of the problems as its predecessors.  I don’t care for the astroturf, of course, which gives the place a bit of a sterile feel.  But in spite of the Argonauts’ retired jerseys hanging high in the rafters, this clearly is a baseball-first ballpark–no silliness around me, just sharp baseball fans watching the game.

Even though the park is only 15 years old, I get a “futuristic retro” feel from it, sort of like at Disney’s Tomorrowland.  This is the way we used to think the future would be.  Here are some of the predictions from Skydome that felt advanced at the time, along with the verdict on whether it has caught on:

–One day, ballparks will all have hotel rooms looking out on them!  Wrong–no other ballparks have that I can think of have a hotel on site.  I do admit I like the idea…if ever I could afford it, I’d rent a room and watch the game in my bathrobe while eating room service.

–One day, all ballparks will have Hard Rock Cafe restaurants on site!  I guess Skydome did more or less start this, as it was the first ballpark to have the plexiglass linen-napkin restaurant as a part of the experience, and most ballparks opened since then have followed suit.  I’m not a huge fan of eating there during the game, but for recent trips I’ve grown to enjoy them for pre-and post-game meals.  The folks at the Hard Rock Cafe, for the record, have no idea what, if any, dishes contain MSG.  They’re polite about it, but not exactly helpful.

–One day, all ballparks will have retractable roofs!  Yup, Skydome was the first, and four have followed suit since.  As I said earlier, I don’t like the massive upper-deck that a retractable-roof-with-enclosure necessitates–I much prefer the canopy-style roof at Safeco Field, although I understand the need to shelter fans from cold Toronto

Aprils and Octobers.  The retractable roof completely encloses the stadium.  This creates a terribly tall upper deck, including a few rows along the first-base side that are actually above one of the lights–the only seats I can think of in the majors that are obstructed by lights.  At this low point in Blue Jays’ history, this leads to immense expanses of empty upper-deck seats, one of the largest negative consequences of huge multipurpose stadiums.  Still, the roof was impressive in one way.  I watched it close after the game, and I have to say that the technique for roof closure in Toronto is actually quite striking and beautiful (at least in the roof-closure department).  It’s hard to explain verbally, but here goes:  First, a not-quite-semicircle of covering (which covers perhaps a third of the surface area of the roof) extracts itself from the always-covered semicircular cap over the outfield, sweeping around the circular top of the stadium until it’s opposite where it began.  At that point, there’s an uncovered rectangle at the top of the stadium between the two coverings, and covering extends itself from the outfield side to render the entire building covered.  It was quite fun to watch, but once the roof is in place, the result is a predictably antiseptic indoor ballpark. 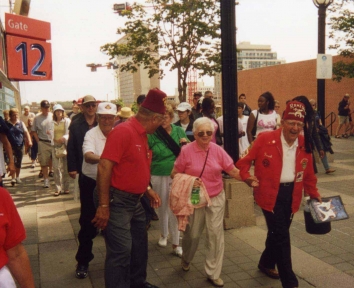 apparently let local Little Leagues play on the field when they’re not around.  Not two hours after the Jays and Rays were done, I watched from the Hard Rock Cafe while 13-year-olds (or so) played a game on the field.  This might be one advantage of Astroturf, actually–no way that the hypersensitive groundskeepers of teams who play on real grass would ever let anyone trod upon it besides major leaguers.

A quick anecdote, apropos of nothing:  on the scoreboard, the Blue Jays, acknowledging the presence of a group at the ballpark, put the following bizarre message on their scoreboard:  “Crystal Springs:  Welcome to Today’s Gamete!”

Skydome provides a unique look at the is-there-any-question-where-you-are test I give to my ballparks because it is the first baseball park I’ve visited outside the US (if you count Puerto Rico as the US).  I want there to be no question that I’m in Canada during the game.  But this leads to the inevitable question…what would Canadian baseball be like?  What the hell are Canadians all about anyway?  When I think of Canada, I think of the following things, roughly in this order:  socialized medicine, Bob and Doug McKenzie, Second City comedy, a weaker dollar, hockey, and a friendly, polite affect that is occasionally clouded by either a gentle smugness or a troubling inferiority

complex.  Fair enough, but what would this look like at a game?  I did sit in front of people from London, England via London, Ontario at one of the games, so Toronto gets credit for bringing its international and cosmopolitan flair into the ballpark.  What’s strange is that, even though Toronto is the largest city in Canada, I didn’t get anything like a big-city feel in either the ballpark or Toronto as a whole.  Sure, some of the people tried to heckle umpires, opponents, and a .205-hitting Carlos Delgado, but they lacked both creativity and passion.  I suggest you stick to politeness, Toronto…it suits you.  Also, Canadians go too far in their effort to be Canadian by making “Take Me Out to the Ballgame” the second song played during the seventh-inning stretch, after a forgettable, insipid singalong called “Let’s Play Ball.”  I don’t think it’s caving in to American cultural creep to drop “Let’s Play Ball,” or at least put it second.

Beyond those minor negatives, there is a nice Canadian feel to the park, from the advertisements for GM Canada 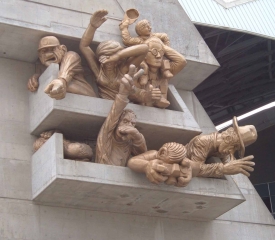 to the subtle-but-proud maple leafs on the outfield walls.  The ballpark’s location immediately next to the CN Tower leaves no question as to where I am.  It makes me feel as though I’m in the center of activity, and the CN Tower, along with a massive skyscraper (I think apartment buildings…only in Canada do you have people living in such large and beautiful downtown skyscraper locations) actually gives something to look at beyond the stadium’s massive upper deck.  The approach to the park is also wonderful…in spite of aggressive scalpers (and, in Toronto’s poorly-attended and losing 2004 season, quite desperate ones), there are nice gargoyles

of Statler and Waldorf-like fans on the ballpark’s exteriors, including one of a guy giving a big raspberry to someone, perhaps an umpire or opponent…the only instance, I believe, of an impolite fan in stadium art.

For what it’s worth, I’m convinced I’ve found the best bang-for-the-buck for a ticket in major league baseball.  My favorite bang-for-the-buck seats in any ballpark are always in the top deck behind home plate.  It’s where my Safeco Field season tickets are…I can watch the entire play develop, have an excellent angle on top of the play, and don’t pay a lot of money.  Skydome’s top level, the 500 level, is actually closer to the field than comparable seats in other parks.  I could hear home plate umpire Larry Vanover’s every call, even the quieter ones.  I could even hear the beginning of an argument between first base umpire Sam Holbrook and Blue Jays manager Carlos Tosca that got Tosca ejected from the game.  After a couple of close plays, Tosca was obviously expressing displeasure from the dugout, and Holbrook shouted at him:  “I don’t want to hear it anymore!”  This drew Tosca out of the dugout, which led to his early dismissal.  The point is, I was very close to the action, as this photo should demonstrate: 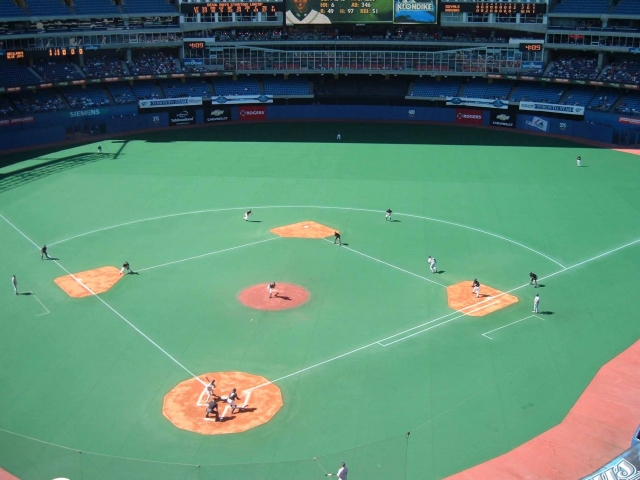 So, in the end, Skydome will land somewhere in the middle of my ballpark rankings, but I did enjoy the experience there a good deal.  There was just enough personality to shine through some of its drawbacks, and in the end, it’s the last of the ballparks that was designed as a ballpark first and a tourist destination second.  For that, I give it credit.

Carl Crawford was the hitting star in the first game, collecting three hits, scoring two runs, and stealing a base.  Still, the Jays’ Josh Towers was too much to beat.  He’s now 2-0 in my presence–this in two appearances.  I’m your man, Josh…as of that ballgame, I’d seen two of your 21 career wins, including a (sort-of) close to perfect game!  Invite me to a game, dude!