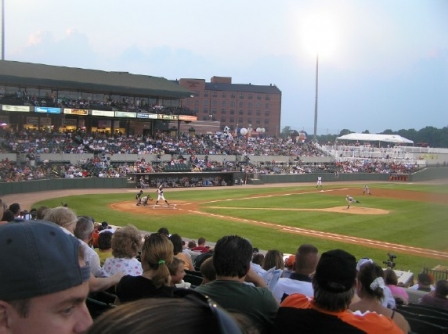 Baltimore and Philadelphia, and just off an Amtrak line that includes Trenton and Wilmington–and therefore was an easy addition to the 2007 Car-Free Eco-Friendly Baseball Park Tour.  Of course, I ruined any eco-friendliness by inviting my kid sister up from DC for the game; but then, she was on her way north to kick some peoples’ asses in a paintball tournament anyway, so I don’t think I added any carcinogens to the atmosphere on this day.  And it’s nice that my kid sister could join me.  Indeed, she might be in danger of eclipsing the record for Most Ballparks I’ve Seen A Game With (Non-Wife Division):  I’ve seen games in DC, Atlanta, Seattle, and Denver (twice) with her, plus Aberdeen.  And I think we might have a record for Most People Who Have Turned Around To Look At Us Confused While We Sang At Ballgames.  In Atlanta, it was Les Mis with modified lyrics.  Here, it was the game 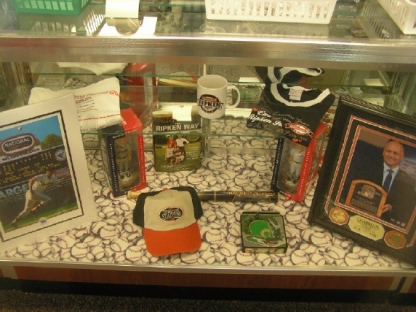 of Just Because They’ve Stopped Playing The ’80s Song Doesn’t Mean We Should Stop Singing It.  Yeah–it’s no coincidence that our childhood home had a “no singing at the table” rule.  Did yours?  You probably didn’t need it.  Anyhow, thanks for coming up, Kath.

The ballpark is quite an attractive one.  Ripken spent his money well to create a good-looking edifice with nice bells and whistles.  The ballpark does well on the Is There Any Question Where You Are test for several reasons.  First, Ripken is omnipresent–and totally deified–in this place.  The gift shop is almost comical in its Ripkenitude.  All that was missing was the Cal Ripken Jr. Sponge and Cal Ripken Jr. Facial Blotter.  I’m just thankful Ripken hasn’t sponsored any erectile dysfunction medication.  It was especially intense during this visit because the IronBirds were playing at home during the Cal 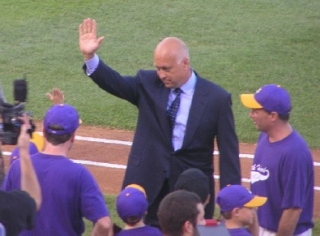 Ripken World Series (Ripken lends his name to a league for 12-year-olds), so the man himself was in the building, and I got to see him in person for the first time since his last game at Safeco Field six years earlier.  The Hall of Famer gave his papal wave and shook hands with most of the front row, while the fans, whose beloved Orioles had not been in the same time zone as good in at least a dozen years, cheered him lustily.  It’s fun to be close to a Hall of Famer.  I only wish I could have been down in the front row.  Ripken pictures on the wall, highlights from Ripken’s 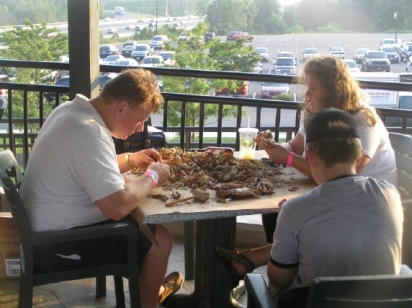 career all over the joint, the name Ripken Stadium, the IronBirds name and mascot…it’s absolutely clear where we are, and who we’re paying tribute to. 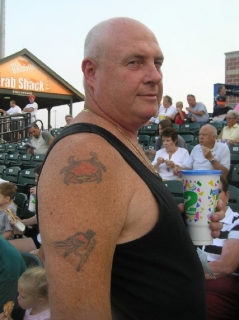 Beyond Cal, the ballpark does say “Maryland” in all kinds of ways. For instance, there’s the crab shack.  I love crab, and Maryland is associated with crab about as closely as any state is with any food.  So to have the crab shack down the right field line, and watch people sucking down crab meat and leaving behind entrails…well, you can’t do much better than that.

And Ripken’s money has paid for what must be the most advanced facilities in the New York/Penn league.  The scoreboard, for instance, was every bit as cool as any I’ve seen in the minors, and I especially like the way they used the long, skinny outfield wall boards.  They showed nothing

but the player’s eyes!  I thought that was an interesting, artistic touch.  I couldn’t help but wonder if there was some unique characteristic in the eyes that tells whether or not a person will become an athlete.  And being on the inside of a gorgeous red brick edifice makes a lot of difference to me.  There didn’t seem to be a bad seat, and the IronBirds’ fans, like Orioles fans, seemed 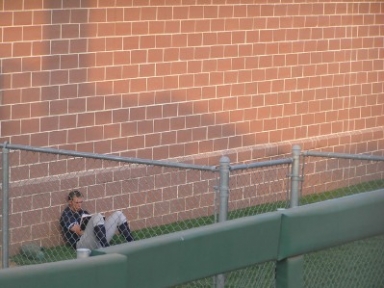 to know their baseball and enjoy their night out (although many bailed out early in the lopsided loss).

I know I sound like your crotchety elderly neighbor now.  You know…the one who would ream you out if you hit a ball into his yard, whose vocabulary didn’t consist of anything more than “damn kids!”, who would call the cops when you were having a movie night with your friends.  Trust me:  that 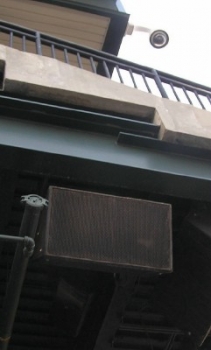 is NOT me.  I’m not one of those who believes that a ballpark should be quiet like a church.  But there comes a point where the noise actually detracts from the game rather than adds to it, and Ripken Stadium goes way, way beyond that line.

One of my favorite things about baseball is the ability to have conversations during the game.  The natural breaks and ebbs and flows of a game mean that I 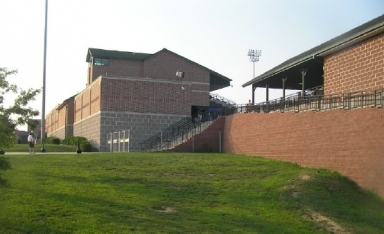 can catch up with my kid sister without having to feel like I’m neglecting the game.  But when one is sitting beneath a speaker–a speaker which, by the way, is cranked way up past eleven–and one actually has to shout to speak to the person next to them, that’s a problem.  It’s a problem compounded when the IronBirds decide that they need to play something literally between every damn pitch. 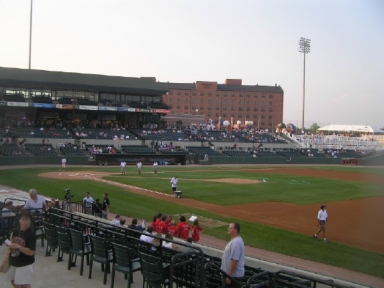 Why, IronBirds?  WHY?  It is completely unacceptable to butt in on my experience like this.

When I headed to the bathroom, I figured I’d get some sort of reprieve from this.  Perhaps the fine folks of the IronBirds would treat me to the radio play-by-play (in my opinion, the only acceptable thing to play in the bathroom of a ballgame).  Nope.  For reasons that are absolutely 100% beyond me, the IronBirds piped their PA music into the bathroom. I can’t see what’s going on out on the field, so these sounds are completely without context.  And beyond that, they’re hilarious while I’m peeing or pooping.  Seriously–I had to laugh out loud.  “Dah-dah-da-dot, da-daaaaah!..CHARGE!”  Or the rhythmic 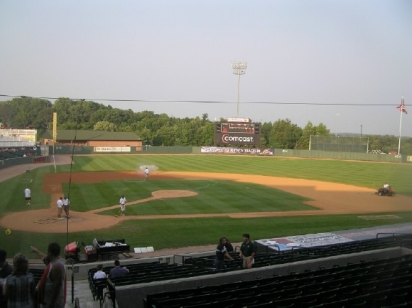 clapping.  I might take advantage of this kind of encouragement when the time comes to potty-train my child, but as an adult who has been successfully housebroken for over thirty years, I found it annoying…insulting even.

“They really order you around here,” a stranger said to me on the concourse, perhaps reading my mind.  He got it exactly right.  I don’t like being ordered around anywhere, least of all at a ballpark.  Hey, Ripken stadium staff:  Back off.  Back WAY off.  Let your stadium do the work for itself.

So, in the end, as much as I felt like Ripken Stadium had going for it, and as much as I enjoyed the modern-retro-Oriole Park feel that it had, I’m afraid I come across with a more negative than positive feel for the place.  With all of the positive reviews of the park out there, I came out disappointed.  I can see why the reviews are positive…the ballpark is gorgeous in all sorts of ways.  But if I went to the Louvre, I wouldn’t want a tour guide shouting in my ear all the moments that I’m supposed to be impressed.  Turn down the volume, guys, and let us watch the game in a little more peace.

Regional feel:  8.5/10
Very good here.  Between the crab and the idolatrous Ripken-worship, there’s no question where I am.

Charm:  2.5/5
Remember the movie The Man with Two Brains?  Where Steve Martin meets a gorgeous-looking woman only to find out she has a voice like Fran Drescher’s larynx had been scrubbed raw by a cheese grater?   That’s what Ripken Stadium is like.  Visually gorgeous, but auditorily anything but.

Spectacle:  2/5
Overdone–even for short-season A ball.

Team mascot/name:  4.5/5
Ferrous (on right) and friend.  That’s a heck of a great mascot name for this team.  Any mascot name that requires high school chemistry to understand is a winner in my book.  Also, the team name is 100% appropriate. 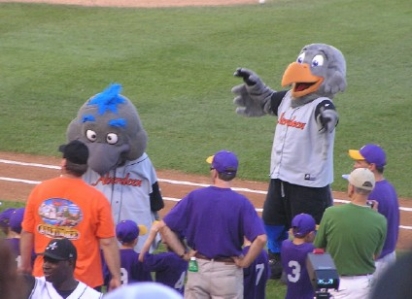 Fans:  4.5/5
A sellout crowd that included my sister.  Minor deduction for so many leaving early.

Intangibles:  1.5/5
I felt assaulted, but still give the park credit for what it does well.