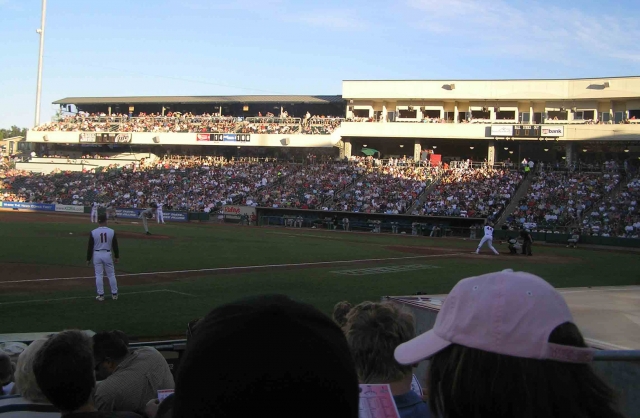 For starters, the location is ideal.  They’ve placed the ballpark on the river, just across from downtown, much like in Wichita.  From every seat in the ballpark, 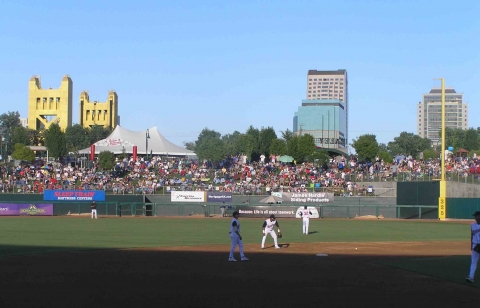 and even from much of the concourse, there’s a fantastic view of the bridge that would lead you right to Arnold Schwarzenegger’s desk, if you were so inclined as to pay him a visit.  Sacramento’s downtown rises up behind and around the bridge, so the ballpark passes the important “is there any question where you are” test by virtue of sheer location.  Approaching and leaving the ballpark is a major part of the experience here.  I highly recommend parking downtown and strolling along Sacramento’s river walk on the way to the ballpark.  River walks are beautiful no matter where they are, and Sacramento’s is near loads of fun shops and night spots.  Then, cross the bridge on the south side (the stadium side)…otherwise, you’ll be forced to do a fairly lengthy detour back under the bridge (there wasn’t a convenient way to cross the street near the stadium).  I’d recommend against getting to the ballpark too early, since there’s minimal shade to wait in by the southeast entrance.  I’m always a fan of the experience of a ballgame starting on approach (Boston does this well in the walk from the T station, and Seattle isn’t too shabby 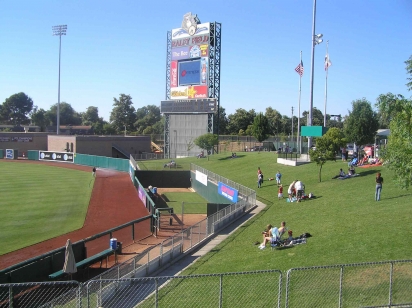 either, at least in the approach to the ballpark from the north).  The experience of approaching Raley Field is as wonderful as that of any minor league ballpark I’ve experienced to date, and that’s important.  The ambience of a sold-out crowd approaching a ballpark is unmatched, and the RiverCats’ Independence Day Fireworks celebration had the crowd in a festive mood.

I especially appreciated this ambience on this trip, as my wife and I finished off our 4th annual Fourth Of July Baseball Road Trip, and our first as a married couple.

My wife and I have pretty much decided that the annual Fourth of July Baseball Road Trip will be a continued tradition, including after we have children.  How will the kids respond to this tradition?  I can just picture them complaining about it, saying “How come we can’t stay home and barbecue like normal people?”  But I bet we can make this into a wonderful tradition.  I’ve spent 4ths of July enjoying packed houses all along the West Coast.  I’ve watched people from four states ooh and aah at fireworks displays.  When the trip is timed right (as it was this year), I’ve seen multiple fireworks shows in multiple ballparks,

with almost every night a packed house.  I often feel like a stealth American, sticking an American flag into my hat and watching yet another small town or small city celebrate the USA.  I’ve grown to love the tradition.  And since families need traditions, even if my kids whine about this one through their teenage years, I think that they will look back fondly at these when they happen.  Of course, they’ll all be recorded on this site.  But I digress.

Inside the ballpark, Raley Field has several touches that help to expand the festive feel of the approach to the ballpark.  First, general admission tickets will get a seat on the grass beyond right field, and that space was totally packed on this day (although the spots in the shade went first).  There doesn’t appear to be a bad seat at Raley Field; the grandstand consists of just one level of seats beneath some skyboxes, including a batch down the right-field line that appears to include a Tiki-themed restaurant.

The pavilion area is quite lovely since it provides a mostly-unobstructed view of the field of play and even of the Sacramento skyline. 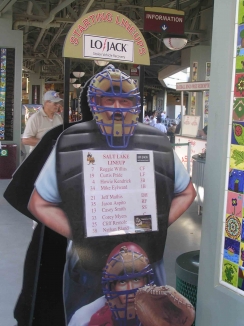 I like the ability to get my concessions without missing any play.  And 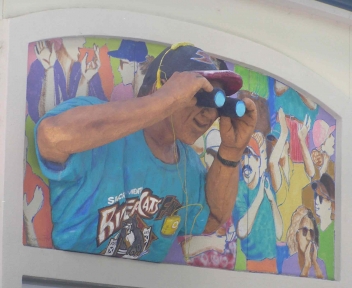 while I’m hardly a ballpark foodie, Sacramento’s concessions were notably good:  the nachos I bought from the Mexican place had guacamole, black olives, and sour cream–not just the usual orange goo in a plastic-corner-cubby.  My wife was stoked at a chance to buy a root beer float, but alas, they ran out.  Still, the idea that it is possible to do this at a ballpark wins my raves.   Also, the pavilion area had several nice, baseball-related touches.  There are two fairly cool three-dimensional bits of art depicting fans leaning out of the walls to get a better look at the game.  Also, the lineups are presented on sandwich-cutouts shaped like umpires, which I appreciated.  So rarely are there positive depictions of umpires in the world–these provide a nice change.

With quality AAA baseball in such a gorgeous setting, the RiverCats don’t need to do much in the way of distracting promotions, and for the most part, they don’t, which I liked.  On this Independence Day celebration, they did some strange stuff on the scoreboard, asking trivia questions and providing random facts about our nation and its presidents.  It was fun to play along during breaks in the action. 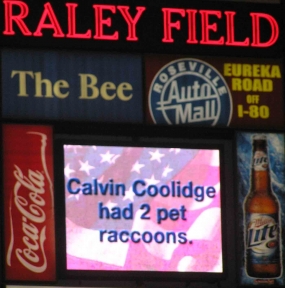 Beyond that, the baseball was central.

I was a little bit troubled by the self-declared “Team Mom” seated in the front row of our section.  The idea of the RiverCats needing a team mom is a little bit creepy.  I can understand the purpose of both declared

and undeclared team moms at the rookie and short-season A levels.  There, you’ve got kids who are fresh out of college, fresh out of high school, or even (in the case of some Latin American ballplayers) younger and on their own for the first time.  The need for host families in a small town and someone to help these young men with what might be their first forays into rent and laundry are welcome.  My wife’s experience working for a short-season A team backs this theory up.  But the youngest kid on the team was nearly 24, the median age of the RiverCats players was 26, and a significant minority of them were in their 30s.  None of them were fresh out of college (nobody starts their career at Triple-A), all had lived at least

one year (and usually far more) on their own, and I’d wager that at least a third–and just as likely more–were married.  Put the orange slices away, lady–these players don’t need or want a team mom!  My wife got the sense that the players, as they passed this woman hooting at them, were merely giving polite “whatever, she’s harmless” nods.

What was stranger was the way the “Team Mom” decided to use her self-declared position to advance a political aim.  Sounds bizarre, but check it out:  She held up a sign that read “RiverCats and fans want our troops home safe.”  Of course, that’s true of all Americans–we all want the troops back safe–but when she held up this sign in July of 2006, there was significant debate over exactly when and whether our troops should pull out of Iraq, and the sign could easily have been interpreted as calling for troop withdrawal.  Even though I’m a pacifist liberal, I found this sign creepy.  Not because she was expressing her opinion at the ballgame–that is her First Amendment right–but because she drew in players and fans, some of whom might disagree with troop withdrawal.  To review, she invented a position for herself with the team, and then abused that self-declared position.  Yuck.

But that’s a minor gripe.  It doesn’t detract from the ballpark, which was a fantastic experience not only before and during the game, but also afterwards.  After the fireworks, we joined massive throngs of foot traffic back across the bridge into Sacramento, and walked over a boat parade in progress on the Sacramento River.  Boats were festooned with flags and stuffed with revelers, but more impressively, were completely covered in patriotic lighting.  Light bulb-covered boats stretched along the river until it bent out of sight.  It was a fantastic way to end the holiday celebration.

On the whole Raley Field is a tremendous ballpark–absolutely as good as its lofty reputation.  It’ s enough to justify making Sacramento a part of a California vacation, and in the process, you just might be pleasantly surprised at what you find along the river.

Regional feel:  9/10
It’s right next to the Sacramento River and has constant, gorgeous views of downtown Sacramento.  Can’t complain there.

Spectacle:  4/5
A few, always in their place.  Baseball was central, but wacky stuff was there to be had. 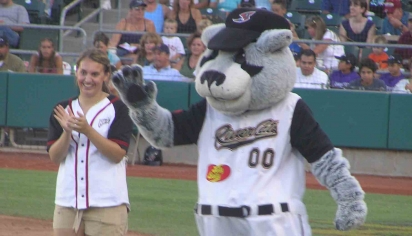 Dinger and caretaker.  The name “Dinger” has been done, but I like “RiverCats,” and Dinger clearly is one.

Intangibles:  5/5
A gorgeous night, a great game, a fantastic view, and great food.  This is a gem.

It was all about Salt Lake pitching, as five hurlers (Nathan Bland, Matt White, Matt Hensley, Marcus Gwyn, and Greg Jones) combined on a two-hitter.

Howie Kendrick drove in both runs with an 8th-inning double.