(PGE Park was converted to an MLS soccer facility after the 2010 season, and is still used for soccer.)

Portland was the third stop on what I hope will become an annual event–the Paul and Michelle July 4th weekend trip to minor league ballparks.  It’s possible we won’t be able to afford to go to new stadiums every year, as by the end of this year, I’ll have all of the Washington, Oregon, and British Columbia stadiums crossed off my list.  But who can come up with a better July 4th tradition than baseball…minor league baseball?  It’s American, kids and adults 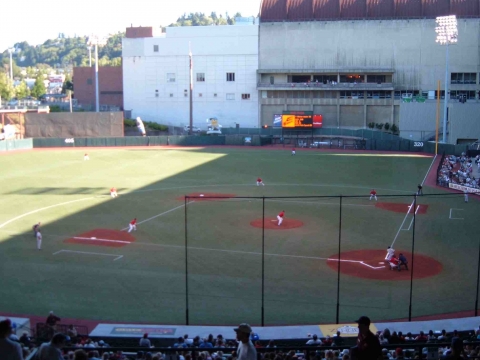 love it, and you get to see a fireworks show safer than what your crazy Uncle John puts together with marginally-legal explosives he spirits in over the state line.  If you do the weekend right and are willing to drive a little, you can get two fireworks shows (Eugene’s was after their July 3rd game, Portland’s on the 4th).  Plus, the minor league baseball atmosphere is better–bigger, louder, more looking-for-a-good time crowds.  So even if we just dip down to Tacoma or Everett every year, I’m thinking this will become a tradition.  And it’s a good one.

And we could certainly do worse than to visit Portland again.  I was extremely impressed with the setting of the ballpark.  Field level is significantly below street level, so from throughout the stadium, when any fan looks out past left field, it’s easy to see city life go by.  Portland’s light-rail MAX train goes past the fence out there, and better still, people who want to watch the game for free can do so easily by walking up to the fence between the sidewalk and the left-field pavilion.  It’s not that bad a view, actually, as these pictures should show. 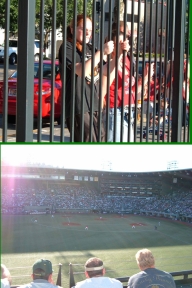 X trains and the Beaver mascot are only a tiny part of what gives this fine ballpark local color.  A good chunk of that local color is supplied by Timber Jim, the de facto human mascot for the Beavers and A-League soccer’s Portland Timbers.  Timber Jim is a bona-fide lumberjack.  If you don’t believe me, just check out how he clambers up the giant log/pole 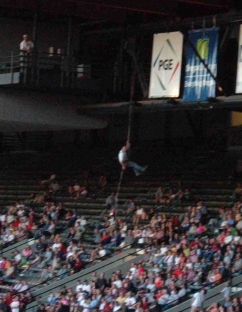 beyond the right-center field wall and watches several innings of the game from there.  Also, check out how he repels down from a beam to dangle in front of fans and lead cheers from midair.  He’s an excellent asset to the team–not really detracting from the game, but very much adding to the experience.

Speaking of detracting from the game, this is the first game since my early youth where I have done the wave during the game.  I know, I know, disappointing.  But I think you’ll understand when I say why.  I attended this game with Michelle the Girlfriend and a whole gaggle of her college buddies (and their spouses and kids).  They don’t know me terribly well yet, so as they did the wave, I was explaining to them that “I don’t do the wave.”  Matt, one of Michelle’s best friends, was trying to talk me into doing the wave.  I, of course, remained adamant.  Michelle knows how passionate I am about the wave.  But she made a tragic mistake.  She cavalierly–and, as she soon 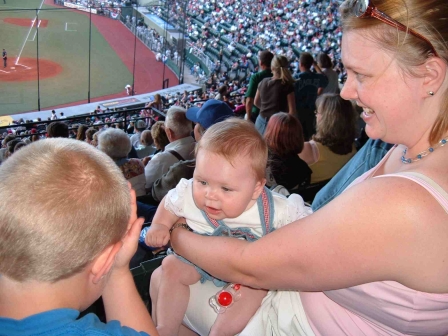 learned, too hastily–said to Matt:  “I’ll give you a hundred dollars if you get him to do the wave.”  Matt didn’t miss a beat before he turned to me:  “Paul, I’ll give you fifty bucks if you do the wave.”  Hey, we all have our price–fifty bucks is significant money to a teacher–and it’s not like doing the wave is a crime.  So when the wave rolled by next time, I stood up, shouted, and did the best wave I’ve ever done.  Alas, Michelle was very disappointed in my lack of morals.  I hope I didn’t cause long-term damage to the relationship.  How much money would YOU take for doing the wave once?  I bet it’s less than fifty bucks.  Fifty bucks which, by the way, both Matt and I are still waiting for.  Michelle–hurry up.  We’re charging interest.

The other thing I’ll remember from this game, besides forever losing Michelle’s trust in my integrity, was teaching a woman in the group to score.  She was given a scorebook for a recent birthday, and it was suggested that I help her through the game.  No problem…it’s very nice to help somebody out, and I love both scoring and teaching.  But my…it wasn’t scoring this woman didn’t understand, it was baseball. Case in point:  after a double play, I started to explain to her where to mark each of the outs.

“Here’s how you mark the double play,” I told her.  She gave me a blank look, so I continued:  “A double play.  That was a double play.”  Still nothing. 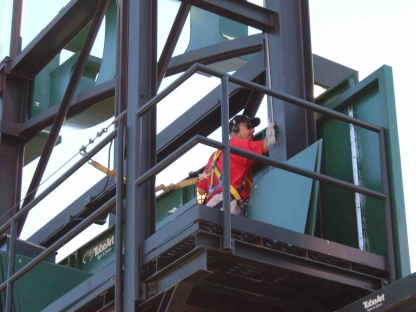 “They got both the runner and batter out.”  Now she’s looking a little panicked behind her cluelessness.  “You know, a double play.  Two outs on one play.”

Finally, both confused and astonished, she responded:  “They can do that????”

It’s not so much my efforts to teach her how to score that interest me…it’s the whole notion of the situation that I’m interested in.  Why would somebody who  didn’t understand baseball happily receive a scorebook as a gift?  To be honest, even though she wasn’t yet a proficient scorer at the end of the day, I admired her a good deal.  I sure wouldn’t try to score cricket or bridge.

At this writing, it looks like the Montreal Expos have next to no chance of moving to Portland.  I admit I wish they would–not so much for the possibility of a new NL team down the road in a new stadium, but because it’d be fun to see major league baseball in this cozy, interesting venue.  No sweat: I’ll have to settle for the quite pleasant alternative of a few minor league trips down I-5 to catch the Beavers at the very enjoyable PGE Park, where I’ll sit with Michelle and not do the wave.  Unless somebody meets my price.

UPDATE JULY 2009: PGE Park has now become my home stadium, since I moved down I-5 to Vancouver, Washington in the summer of 2007.  My knowledge of the park–a couple of years of partial-season packages–has led me to appreciate it a little more (still love those MAX trains heading by) and a little less (there’s no legroom, and a tall guy like me needs it).

The bad news is that it’s all academic, however, since PGE Park will become a soccer-only facility after the 2010 baseball season ends.  As of this writing, there’s very little certainty as to what will become of the Beavers. They may be gone just like Timber Jim (who has hung up the repelling equipment since my original post).

There’s a chance that the Beavers will leave the area altogether, which would be terrible, but right now the number one possibility is that they’ll leave downtown and move to the suburbs. If they go to any suburb other than my own, the number of games I’d attend would drop precipitously.  I will not fight rush hour out to the suburbs to catch a game more than once or twice a year.  Stay tuned on this one.

Regional feel:  8.5/10
Outstanding.  The MAX trains going by left field and a guy standing on top of a giant log?  Can’t beat that.  The former means you’re in the city, the latter means the Pacific Northwest.  If this is the minor leagues, it must mean Portland.  (I deducted a half point for the loss of Timber Jim, but the view of the Oregonian building still carries the day.)

Charm:  3/5
PGE Park is old…mostly the good kind of old.  It gets docked for having a carpet, the right-field eyesore view of an extremely unattractive athletic club, zero legroom, and the stands being some distance back from the field.  This weighs down the score in spite of its many positive quirks.

Spectacle: 4/5
A fair amount, but the game came first…about right for AAA. 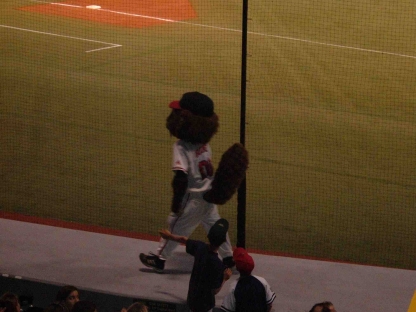 Lucky Beaver.  The mascot is good–indigenous and intimidating (I’d hate to face a rabid beaver).

Aesthetics:  3.5/5
Wonderful to left field, hideous to right, and mixed within the old stadium.

Pavilion area:  3/5
Nice sense of ballpark history and a good sunny left field porch.  I do wish that more of the pavilion were outdoors, however.

Scoreability:  3/5
The only balls-and-strikes scoreboard is hand-operated.  Mistakes are a touch too frequent.  I like the retro feel, but I like accuracy better.

Fans:  4/5
Attendance is often dismal, but when they show up, it’s a raucous-but-civil group.

Intangibles:  4.5/5
Overall, I like this place for baseball and I’m going to miss it.

A pitchers’ duel.  Portland’s Chris Oxspring (who really should have been a mattress salesman…excuse me, I mean an attress salesman) gets the best of it, pitching seven innings of four-hit ball.

Edmonton’s Josh Karp is the hard-luck loser, pitching very well besides a three-run homer to the Beavers’ Jon Knott.

Portland’s Mike Thompson takes a no-hitter into the sixth in a marvelous pitchers’ duel with Tucson’s Shawn Estes (on a rehab assignment).  He loses it on a solo home run by Keoni De Renne, and three runs in the ninth seal it for Tucson.

In 2007, Royce Huffman has a killer Father’s Day afternoon against Salt Lake, going 4-for-4 with a double, a home run, 3 RBIs, and a stolen base.

The 2009 AAA All-Star Game was an enjoyable affair.  Eric Kratz of Indianapolis takes MVP honors in the International League’s win, but I’ll most remember Nashville pitcher R.J. Swindle busting out a few 50-mile-an-hour breaking balls that nobody could hit.

Best pitching performance so far is probably Fresno’s Kevin Pucetas, who set the Beavers down on 2 hits over 7 innings.