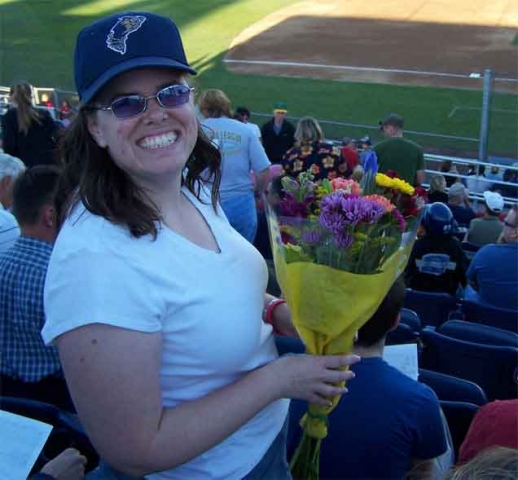 After proposing to my wife (just after visiting Vancouver’s Nat Bailey Stadium), we had 11 months to set up our wedding weekend.  Now, as I have told you, there was never any question:  the wedding was not going to take place at a ballpark, just as the proposal wasn’t.  But we wanted minor league baseball to be a part of our weekend. Baseball was central to our relationship.

Michelle and I wait on the field for our pre-game activities with Al, an AquaSox worker.

Michelle and I dated for a while back in 1997.  During that time, I took her to a Mariners game at the Kingdome.  I taught her the ins and outs of the infield fly rule.  She thought I was nuts.  We broke up (not because of that).  Four years later, Michelle had coincidentally gotten a job with the Tri-City Dust Devils.  She was a moderately big baseball fan, but not quite as intense as those who worked in baseball her whole life.  However, Michelle found that her knowledge of the infield fly rule gave her credibility in the wild world of sports.  She also found she was all alone in Kennewick, Washington, and thinking of me.  She wrote me a letter.

Meanwhile, I was writing these pages for the first time–on the major league side.  In the process, I was thinking of how cool Michelle was.  I was also worried–I had heard through very indirect channels that Michelle had gotten married and

had become very sick, perhaps even died.  I remarked on that on the Kingdome page!  So when Michelle wrote me, I actually wrote back “Glad to hear you’re alive!”  Weird.  I took my sweet time popping the question…and three and a half years later, we were celebrating at Everett.

All Michelle and I wanted was to get a few seats and a chicken dinner.  But the group sales representative we worked with at the AquaSox must not get a tremendous amount of rehearsal dinners.  She went crazy-nuts and was thrilled to work with us!  Right off the bat, she said:  “Of course, someone from your party would need to throw out a first pitch that night, and we’d want to get your guests in the game for some of our onfield promotions!”

We were thrilled.  But then we were concerned.

If anything was going to break up our marriage before it got started, it would be an argument over which of us got to throw out the first pitch.  So Michelle emailed to ask if we could have two first pitches–one for each of us.  We got the following response:  “I will reserve TWO first pitches as well (unless one of you would rather sing the national anthem J)”  Weird emoticon–I think it means she was being sarcastic.  But singing the National Anthem at a ballgame is one of my lifelong dreams.  I called her from work the second I saw the email and asked if she was serious.  She asked this:  “Can you sing?”  Yes, I can.  Then, this:  “Are you going to go Roseanne or Janet Jackson on me?” I’m too patriotic to do the former and not chesty enough to do the latter.  “Okay.  You’re on.”

Thus it came to pass that Michelle walked the red carpet to deliver the first pitch of the game (well, one of about a half-dozen “first” pitches).  We practiced for months…Michelle wanted to throw from the rubber and didn’t want it to bounce.  When we started practicing in the spring, she could only get the ball about 45

feet.  But the practice paid off.  Michelle threw from the mound, just in front of the rubber.  The ball made it to catcher J.B. Tucker on the fly–and out of the six first pitches, hers was the only one not to bounce.  When she walked up to have her picture taken with Mr. Tucker, Michelle was going to say “This is my last night as a single gal!”  I had even authorized a quick tryst at home plate, but Michelle chickened out and said nothing.  Your loss, J.B. Tucker.

Next up: the National Anthem.  I had worked on it for several days.  The big question:  do I go up the fourth on the word “Free”?  If I start in the right key, I can pull that off.  I had made other decisions beyond any shadow of a doubt:  I would go with a fairly slow tempo (hey, this is my moment, I want it to last).  I would slow down just a hair at the end of every quatrain.  I would smile on “That our flag was still there,” thus giving the line the warmth it deserves.  And then, if it felt right, I’d go up the fourth.  It all worked out, except maybe going up the fourth.  I hit the note all right, but had trouble getting off it (there was a minor glitch at the end of the note–I noticed, but nobody else said they did).

In any event, the best part was the cheering from my friends and family.  My buddy J.J. snapped this picture, which happens to be one of my favorite pictures of all time.  It’s me singing, but more importantly, it’s nearly everyone I love in the world in the top four rows of the first full section from the left.  All of my buddies and family are looking off at the flag–except for my mom and dad, who are looking down at me. 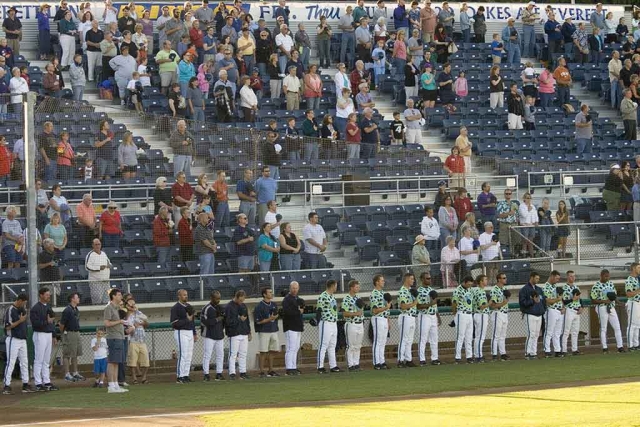 Things went on from there.  Michelle was the “Sweetheart of the Game” for the second time (and at the second stadium) in a month. 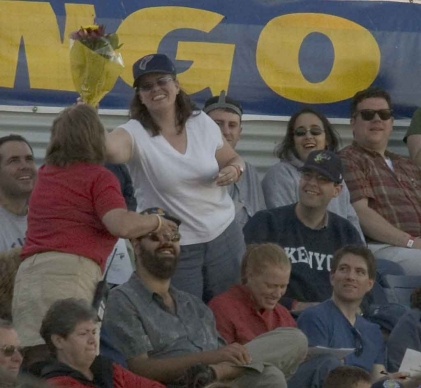 My Uncle Rick won a hundred bucks in a remote-control car race when he totally T-boned his opponent.  My nephew Henry tried to throw plastic fish into a net his dad was holding…but unfortunately, he threw the fishes over his shoulder–north–while his dad was standing east of him.  My new father-in-law had to decide whether to take an AquaSox cap or “what’s in the car” (which, the PA guy said, is a Mark Goodson/Bill Todman production distributed by KingWorld).  He took the car, and was rewarded with a $50 gift certificate.  Our friend Monika guessed the movie trivia question right (“Some Like It Hot”).  Some younger guests got to run around the bases, one of them in a race against Webbly.  And, to top it all off, the night ended with fireworks!

As those fireworks died off, we had all enjoyed the perfect rehearsal dinner.  It was a celebration of baseball, and of Michelle and I, to be sure.  But it turned out to be a huge party and celebration of all of our friends and family as well.  The fireworks were an absolutely perfect way to finish off the evening–it felt like they were for Michelle and me, and a thank you to everyone for heading out.  Our only big worry was that the game would be so fun that it would eclipse the ceremony and reception the next day.  It didn’t.  The game was exactly what we wanted to launch us into our wedding, and our marriage.

BASEBALL STUFF WE SAW THAT NIGHT: