fact that the only way to get there from DC is in a rented car on impossible freeways?  Nobody, I say.  So before I talk about how much I liked Camden Yards, I offer you this:

Things To Do During A Long Rain Delay

Go to a nearby convention for a Japanese role-playing game/cartoon.  We (my dad, my brother-in-law, and I) ducked in for shelter on our way to the game, and saw all kinds of adolescents dressed in full regalia practicing skits and playing their chosen card game.  They seemed to be having a good time, but I was bothered by the 13-14 year-old girls wearing the supersexualized outfits.  Also, I kept wondering…where are everyone’s parents?  Still, if you happen to have a nearby role-playing game convention during your rain delay, go there.  The three of us fit right in, I’m sure.

If you’re coming back to the stadium anytime soon (as I was the next day), avoid watching the video on the scoreboard.  I think they showed every video display they had, or 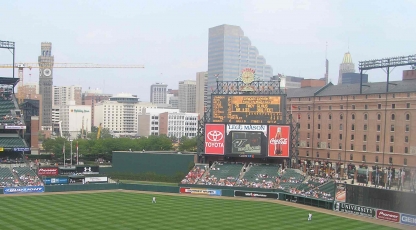 at least close to it.  So the next day I’d seen them all.  They lose something on their second viewing.  (But thumbs-up to the Camden scoreboard people, who have looked for–and, I believe, found–every reference to baseball in TV and film history.  It was quite a baseball-and-pop-culture lesson, I dare say.)

Avoid concessions.  I bet that Peter Angelos, the owner of the Orioles (whom I will later tell you is a jerk), loves rainouts.  It’s a chance to add a home date and all kinds of beer and Boog’s BBQ sales without the 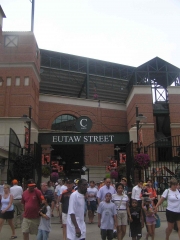 hassle of actually offering entertainment on the field.  They’ll let you take bottled drinks into the stadium.  Drink those.

Do the wave.  I never, ever do the wave during a game.  If I were to stand up to do the wave, or to glance sideways to concentrate on the wave’s coming, I would surely miss the greatest play in baseball history.  But during a rain delay, I’m willing to waive my no-wave rule.  And besides, you’ve got to do something.

Ignore the PA announcer when he tells you:  “We are monitoring the situation and will keep you updated.”  He’s lying.  He’s not keeping you updated.  Why not show, every five minutes or so, the National Weather Service’s radar for the area instead of the 1966 World Series?  It seems to me that’s what everybody in the joint wants to know, and yet they’re not showing it to us, nor telling us what the forecast is.  They’re not keeping us updated at all.

I had to make up these rules on the spot, since both of my home parks in Seattle have had roofs.  But the rules seem effective.  Following them got me through 90 minutes of delay before the Friday night rainout, and 45 minutes of delay during my Saturday game.

Now, the ballpark:  fantastic.  Second only to PacBell among new parks (a little better, even, than Coors Field and Jacobs Field, and that’s saying something). (Note:  In 2006, PNC Park passed it as well.) I love the pavilion in right field above the scoreboard.  I wish the wall before the field weren’t so high.  I’m 6’3″, and it came up to my shoulders.  But I guess, since it’s 30 feet or so to the ground, that they don’t want people lunging for balls and falling.  I stood at the scoreboard for batting practice.  I liked how, when a Boston batter hit the scoreboard, you could feel the vibration.

I liked how everyone started hollering when a batting practice homer came in.  “Here it comes!”  People settled under the ball, but random passersby usually got it.  Oh, and the easiest practical joke:  just go to the pavilion and shout out “Heads up!” at some random point.  People will recoil and look up.  The joke is so easy that I would be ashamed to perpetrate it, like the guys who did it and got me to flinch.

My favorite part of that pavilion:  the little plaque baseballs in the pavement, commemorating who hit the longest homers to right and right-center.  The longest I found:  Ken Griffey, Jr., followed by Henry Rodriguez.  All that’s missing is the pitcher who gave

it up.  But I guess that would be embarrassing, especially since it looked to my eyes like visitor homers outnumbered Oriole homers.

Getting there from DC is difficult because Peter Angelos is a jerk.  There used to be a special commuter train that ran every game day from Union Station in DC directly to Camden Yards.  But Peter Angelos pulled his part of the funding away, so they don’t run it anymore on weekend games.  I suppose he doesn’t need to run the train to make money or to sell out, but if you’re presenting a  product, why would you want to make it difficult for people to see it?  Why not make it easy?  Why would you want to alienate your audience?  Why would you want to make me rent a car, spend a lot of money, and belch a whole lot of dangerous carcinogens into the atmosphere?  Why not keep the train running, make people like you, and do your bit for the environment?  Peter Angelos, in removing this service, is a jerk.  He has no idea how to be a good host.

Speaking of good hosts, major, major thanks to Chris, my wonderful host in DC.  She actually slept on her hardwood floor so that she would hear me knock at my 2 AM arrival.  I was unbelievably touched…she didn’t even sleep on the couch, since she didn’t want to mess it up for me.  I went ahead and confessed a long-ago crush.  Anybody who has any idea why I do that so often, please drop me a line.  But my confession started an interesting discussion about some long-ago crises in our lives.  It was nice to get to know her so much better.  And it’s especially nice to know there’s still another beautiful woman out there who will voluntarily sleep on the floor and be the stop on yet another tour; the 2001 Baltimore-Only Erotic Love and Baseball Stadium Tour.

About Red Sox and Orioles fans…I will grant you that I caught the Orioles in a bad year and the Red Sox while they were still in the wild card race…but what’s the deal with Red Sox fans outnumbering Orioles fans?  When I saw the Orioles play at Fenway Park, there were more or less no O’s fans that made the trip up (although, to be fair, that was a weeknight, while the Baltimore game was a weekend).  It made for quite a loud game.  There were two homers, both by Boston, and both led to huge cheers…that were then almost drowned out by Baltimore boos…that in turn escalated the Boston cheers.  It was quite an even split.  In the ninth inning, when the BoSox got the tying run to the plate, things were very interesting since so many local fans had apparently gone home during the rain delay.  It felt like a high school spirit war, with Boston fans doing the traditional “Let’s-go, Red-Sawx (clap, clap…clap-clap)” while Baltimore fans futilely responded with their three quarter notes and a rest of “Let’s, Go, O’s! (rest).”

And I saw a very strange sight…a Boston fan wearing a Roger Clemens jersey; this in the men’s room surrounded by other Boston fans.  “You’d better lose that shirt, pal,” they said to him, and he responded by saying “He was a Red Sawx.  That’s all I have to say.”   I trailed the guy for a little bit, and heard even random ten-year-olds in Red Sox hats yelling to him “Clemens sucks!”

At any rate, it’s a heck of a ballpark; lots of fun to be in, especially as a neutral Mariners fan.  I’ll try to make it back to get in the game I missed next time around.

January 2007: I did make it back on a muggy Sunday afternoon in August 2006.  There’s still not a train, dammit.  I managed to get there from DC by taking the Metro up to the last stop in Maryland, then take a bus the rest of the way.  The bus driver didn’t exactly win over my confidence when she couldn’t figure out how to get out of the Metro parking lot, but she managed to get us there.  She also rescued me from the most talkative guy I’ve ever been marooned at a bus stop with.  He was a good guy, and when he offered me the seat next to his for half price, I was tempted, but I said “Well, let me see how I feel when I get there…just in case it rains, I might want to get a super-cheap ticket.”  Great move.  I wouldn’t have been able to endure a full game next to him.

Cal Ripken goes 3-for-3 during his final season, including two perfect hit-and-run singles.

Josh Towers comes (sort of) close to pitching a perfect game.  He only allowed one baserunner through five innings, this a fourth-inning fly ball that center fielder Larry Bigbie misjudged, had to dive for, and didn’t get–ruled a hit.  If Bigbie had caught that like he should have, and if the umpires had called the game in the fifth for the lightning (and there was quite a bit), we would have had a perfect game in the record books.  Okay, it’s not as close to a no-hitter as what I saw Roger

Clemens pitch at Safeco Field, but it still gave me something to think about…even a way to root for a rainout.

In 2006…another (sort of) near perfect game.  Roy Halladay retires the first 16 batters he faces, letting only three balls leave the infield…completely dominating the Orioles.  He gives up a run in the sixth, however, and the Blue Jays bring on relievers to get the blowout win.