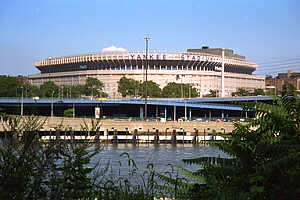 Dad–relax!  Yes, I took the subway, but I was with a friend, and I went to a day game.  I was never in any kind of physical danger.  Well, maybe once, but we’ll get to that later.

The stadium itself isn’t at all beautiful or special in architecture, but I think people’s love of Yankee Stadium (including mine) comes not from what is there but from what has happened there.  To me, there’s exactly one thing that ties me to Mantle and Maris and Guidry and, somehow, even to Ruth…Bob Sheppard.  The man has this wonderful and timeless voice, and I don’t understand why more people who share his job don’t emulate him.  Those long, long pauses between each word can make everything sound so beautiful, majestic, important, historic, even if you know he’s just saying the name of some Tampa Bay Devil Ray you’ve never heard of before and will never hear of again, a guy about to strike out in the second inning of a completely routine game on a chilly, rainy July afternoon, a game between a first-place team and a last-place team.  “The center fielder……….number fifty…….Terrell……….Lowery.”   And all I can think is…my GOD…it’s Terrell Lowery!  How critically important a moment this is!  Bob Sheppard makes this happen.  Not only does he talk slowly by pausing between each word, he pronounces the name just slowly enough so that he–and everyone listening–can absolutely savor every syllable, every phoneme.  This is a man who loves words and loves names to the point where Sports Illustrated once published his all-time favorite and least favorite baseball names to pronounce.  (The best:  Salome Barojas.  He loves the Hispanic names.  The worst:  Mickey Klutts.)

Other PA announcers don’t have the same style, and would probably be fired if they did.  I think this is a terrible shame.  Think of the difference between the way “The shortstop…number three…Alex Rodriguez” is pronounced if Alex is on the home team or on the visiting team.  I find this difference to be ridiculous and borderline offensive.  Is it the PA announcer’s job to tell me when to cheer?  I can tolerate organ playing, music, even a little of the infernal rhythmic clapping…but are fans such morons that the PA announcer has to tell us, through vocal inflection, which are the good guys and which are the bad?  I’m certainly not.  (Incidentally, I feel the same way about scoreboards which say “Noise Now” or “On Your Feet” or other instructional tips for fans.  I will make noise when I am moved to make noise…not because The Man is telling me to.)

Bob Sheppard can’t do what he does for too much longer–he has been doing it day in and day out for close to 50 years–and I’ll miss him when he’s gone, because it will mean the cheerleader PA announcer will have won out over his wonderful voice and classy technique, same for home and visitor.

Yankee fans, frankly, scare the hell out of me.  This game is in 1999, mind you, so the Yankees are in first place and in a stretch of World Series victories.  They never trail Tampa Bay in the game I watch, although it’s a close game.  And they are absolutely ruthless to their home team.  Andy Pettitte gets it for giving up a couple of runs and a homer, Bernie Williams gets it for a groundout with a runner in scoring position (even though Bernie had homered earlier), others get it for other small sins…the negative energy in the place was amazing.

Oh–about that possible near-death experience…it had been a drizzly afternoon, and my high-school buddy and I were a little chilly and were occasionally getting specked by individual drops of water.  Is the rain starting up again?  Are we under a wet stadium light?  After a few innings, I finally catch it…there’s a ten-or-eleven year old kid up there, about eight rows above us, spraying random people with a water gun.  I know how to handle this…I’ve taught sixth grade, so I know what to do with boys who misbehave.  I give him my stern teacher glare and say “Knock it off!”  Game over, I’m sure.  But just as soon as the words are out of my mouth, the instant it’s too late to take them back, I notice that his dad is next to him, egging him on.  What the hell’s the deal with that?  A dad encouraging his son to spray strangers at a ballgame?  Amazing.  Good old New York.  So as soon as I give the kid a glare, I’m worried that the dad is going to come after me, and there’s gonna be a huge fight, and I’ve never been in a fight, and this dad probably is in one every weekend, and the New Yorkers will side with him, and I’ll be in some hospital in the Bronx, and I won’t make it to my Saturday game at Shea…Well, it didn’t happen.  The kid stopped his water gun, at least with me.  Score one for the teacher glare.

So, to review–the historic nature of the grass that Gehrig and Ruth and the rest of them ran on is palpable and impressive, and is aided by Bob Sheppard’s voice…I hope he is not replaced with a cheerleader.  The teams are usually so good that they’re worth the trip.  In short, like New York itself, Yankee Stadium is a wonderful place to visit, and I look forward to visiting again (maybe for a night game…eeek!) but it scares me a little with its negative karma, and I’m glad it’s not my home stadium.

Bryan Rekar, who I saw make his first major league start (a win) in Colorado in 1995, gets the loss.

Wade Boggs pinch-hits in what I believe to be his last appearance in Yankee Stadium.  He grounds to second.