Busch Stadium was demolished after the 2005 season.

Busch Stadium is an argument for stadium improvements.  Between my first visit in 1993 and my most recent visit in 1997, they’d made some changes that made Busch less cookie-cutter and more interesting.  In 1993, Busch was more or less an exact copy of Riverfront, Three Rivers, and The Vet, except that Busch had those nice little arches around the rim.  Now, although it doesn’t have the charm of a baseball-only stadium, it feels a lot nicer…real grass, mostly, and the removal of a section of seats to put in retired players’ pennants.  (At least I think that was done since 1993.  And I like the idea of a player having his own pennant.  Feels right.)  And there are an awful lot of pennants up there, which reminds you of the rich baseball history in St. Louis.

Which is a lot of the point.  St. Louis has a reputation as a great baseball town.  As I recall, in the heat of the Mark McGwire business in 1998, Sports Illustrated called it the best baseball town in America (which, I assume, means in the world).  And my experience in St. Louis backs that up.  I like the feeling of a crowd getting riled up late in the count in a crucial situation, all the while maintaining that Midwestern politeness I like so much (St. Louis has figured it out–at a baseball game, you can be polite and loud at the same time).  I like the way the ballpark is hard by downtown and that you can see the Gateway Arch rising above the ballpark–it therefore passes the “is there any question what city you’re in” test.  I would be happy to call Busch my home park, and I hope there doesn’t come a day when the Cardinals’ brass decides to abandon Busch Stadium for something more cutting-edge that produces more revenue.  (2005:  Alas, that day has come since I wrote those words four years ago.)

Also, Busch Stadium seems to understand the “less is more” idea of ballgame entertainment.  I don’t remember being ordered to cheer so often as I have been at other ballparks.  And my favorite part of each game was the immediate aftermath…no PA guy saying “thank you for coming,” at least not 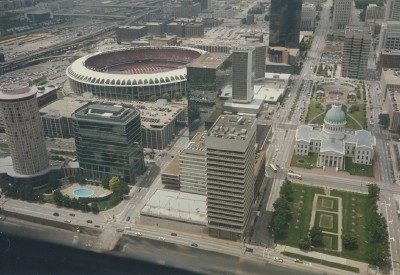 immediately, but right away–DiamondVision highlights with Jack Buck’s call.  No “We win!” foolishness on the scoreboard…just the plays you want to get a look at in case you don’t catch SportsCenter.  It’s obviously run by somebody who understands that baseball is the entertainment instead of some excuse to make a theme park.

It was there that I saw Tim Wakefield at the nadir of his career, which came exactly one season after his huge 1992 debut.  He had been moved to the bullpen because he was suddenly losing.  He came on in relief in a blowout loss.  His knuckleball wasn’t finding the plate, so hitters would wait on that 2-0 or 3-0 70-mile-an-hour fastball, and they’d hit it.  Still, even when they’re not doing well, I love watching knuckleballers.  You expect to see this Pedro Martinez-style delivery–WHOOSH!!–and instead you get…whush.  The ball seems to flutter even from a distance.  I also like knuckleballers because, for a non-athlete like me (the fastest I’ve ever thrown a baseball is about 58 miles an hour), the knuckleball would be my only chance to make the major leagues.  I don’t care how much I work out, my genetics will not allow me to hurl a baseball the 88 miles an hour it would take to be even a borderline major leaguer.  But a knuckler–well, it’s a non-athletic move that beats athletes.  I remember Steve Sparks saying in an interview how he would slow down his pitches, then slow them down again, to make a huge guy like Chili Davis look ridiculous.  He said something like:  “Chili gets frustrated because he knows he’s a way better athlete than I am, and he still can’t hit me.”  Which is a fantasy I’ve had since elementary school…the idea that brains could beat brawn on the playing field.  It can’t…brains-with-brawn beats just-brawn.  Except for knuckleballers like Sparks or Wakefield striking out massive weight-room-enhanced power hitters.

So, on the whole, I was sad to see this ballpark fade away after the 2005 season.  It was somewhat charmless, sure, but now that the four worst of the cookie-cutters (Busch, Three Rivers, Riverfront, and Veterans) have all gone the way of the dodo, I do miss the dullness of them somehow.  In many ways, it’s preferable to the theme parks, especially in a baseball town like St. Louis.  I bet I’ll like the new place, but since the multi-purpose cookie-cutters were the rule of my youth, with all their problems, I’ll miss them a little.  Sentimental and foolish?  Sure.  But true.

Andy Van Slyke, then a Pirate, broke his collarbone jumping for a catch at the center field wall.  The ball ricocheted off his glove and over the fence for a home run, and Van Slyke was out for most of the rest of the season.

I saw an awesome, awesome game–one of the best I’ve seen–in 1997.  Ramon Martinez and Andy Benes were in a pitchers’ duel, but each delivered the key hit for his team…Benes a drive to the wall for an RBI double, Martinez a lucky roller down the third-base line for a leadoff double…he eventually scored.  It was 1-1 on those plays until the bottom of the ninth, when Gary Gaetti almost hit a homer to win it…caught at the wall.  Then St. Louis loaded the bases, Los Angeles brought on Mark Guthrie to face Delino DeShields, and he walked him on four pitches to end the game.  A little bit of a letdown, but that actually only added to the game’s charm somehow.